Can Vogue's glamorous 'Conde Nasty' crowd ever have so much fun again?

For decades it has been a byword for glamour, elegance and style.

It was also one of the very few places where Princess Diana could truly relax and be herself. If walls could talk, what a tale those in Vogue House, the seven-storey Mayfair HQ of publishing giant Conde Nast, could tell.

Ducking through the tradesman’s entrance, Diana would take a lift up to the offices of Vogue to rootle through the legendary ‘fashion cupboard’. There, among rack upon rack of clothes that had been called in for her to peruse, she would linger and pick her favourites off the hangers.

Before the Princess, the offices were frequented by all the big names of Britain’s fashion world – Jean Shrimpton, Lord Snowdon, Twiggy, David Bailey and so many more. However Conde Nast, which runs a number of upmarket magazines including GQ, Tatler and Vanity Fair, is relocating much of its workforce from Vogue House and is reportedly seeking to sell the remaining 75-year lease on the building. 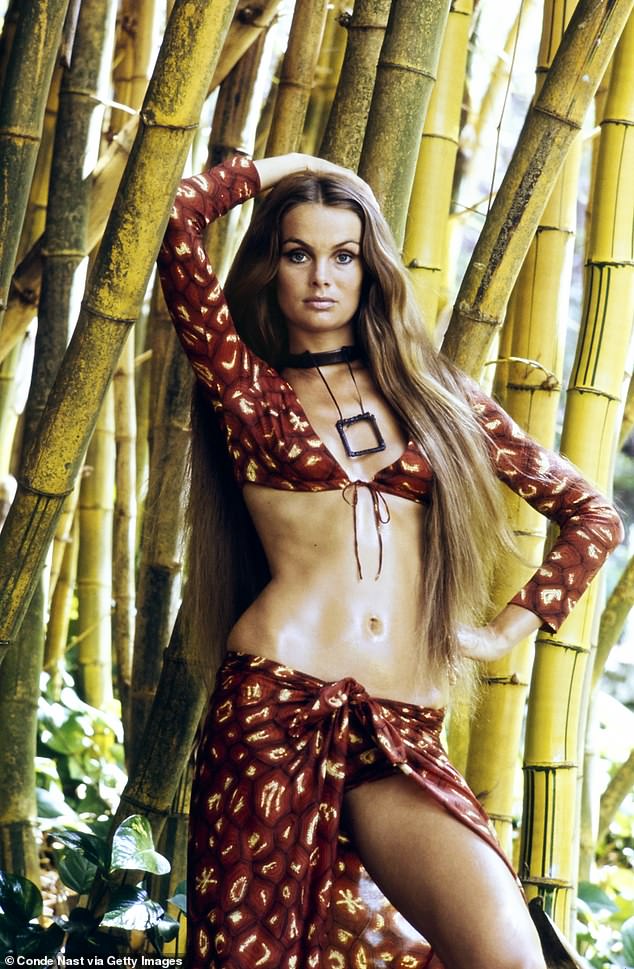 If the sale proceeds, it would spell the end of a remarkable era as one of the most famous business addresses in the world. As Nicholas Coleridge, Conde Nast’s editorial director from 1989 to 2019, wrote in his memoir: ‘When the lift doors opened, it could be anyone inside. The Princess of Wales, Kate Moss, Linda Evangelista, processions of male models on their way to castings, interns collecting coffees, posh totty walking dogs, interior designers delivering lampshades to House & Garden Magazine… this was the daily traffic of Vogue House.’

British Vogue was launched in 1916, with its features on ‘hats and frocks’ soon joined by articles by celebrated writers such as Virginia Woolf, Bertrand Russell and Vita Sackville-West. And it moved to Vogue House, just off Regent Street, in 1958 when the building was newly built.

It was where Swinging Sixties photographer David Bailey met his muse – and later lover – Jean Shrimpton, and where a young Anna Wintour, Vogue’s legendary editor- in-chief and the model for the ruthless magazine boss in the movie The Devil Wears Prada, was brought in to modernise British Vogue.

On her first day she was shown photos of models wearing head bandages and retorted: ‘They look like they have dropped in from Mars.’

And notoriously, the building became associated with the so-called Conde Nasties – a breed of stick- thin fashionistas whose love of withering put-downs was matched only by the sharpness of their towering Manolo Blahnik heels. 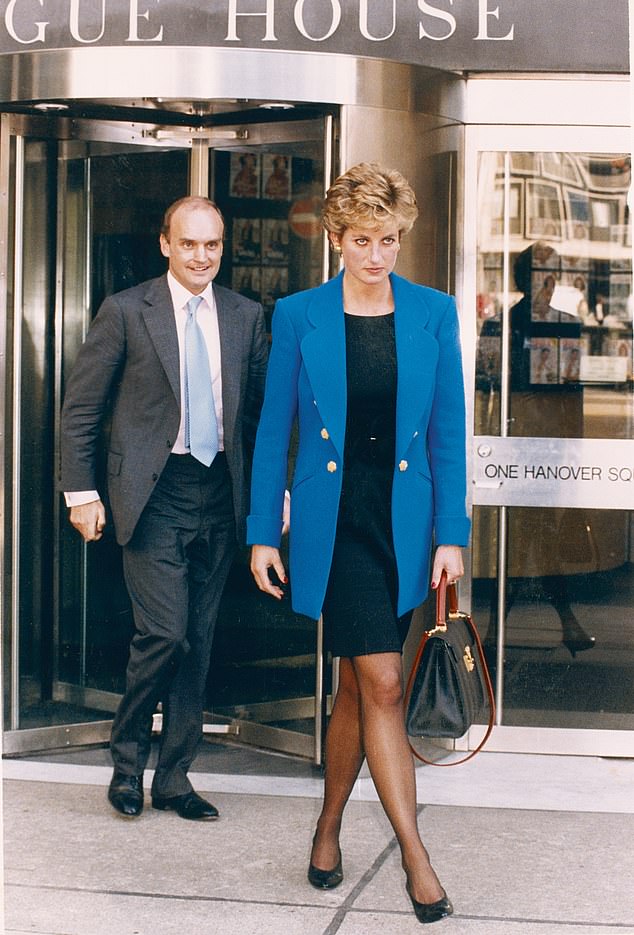 In one tragic vignette that epitomises life in Vogue House, Tatler magazine’s ‘in-house dog’, a dachshund called Alan Plumptre who had his own Instagram account, was horrifically squished to death by the building’s revolving front doors.

The potential move from Vogue House, reported by property trade magazine Estates Gazette, comes as Conde Nast completes a complex global restructuring process which has seen editorial staff numbers pared down and the focus shift from print to online.

A source told The Mail on Sunday that many believe the relocation is imminent, saying: ‘We’re moving from the old to the new.’

Last Wednesday, 120 staff attended a meeting and champagne reception at Conde Naste’s other London base in the Art Deco Adelphi building off The Strand, which is already home to executives and the digital teams. The atmosphere is described as ‘2020s swank’ with free food and a games room, Google-style.

The future of two of Vogue House’s institutions – its veteran receptionist John, a passionate Arsenal fan who has sat behind the semi-circular front desk in the wood-panelled entry for decades, and Tony, who has long run its third-floor cafe – remains to be seen.

For thousands of Britain’s self-styled ‘beautiful people’, Vogue House represents a lifetime of memories: a place where glitzy careers have been built and lifelong friendships forged. Traditionally, staff wages were so low it was said that only girls from rich families could afford to work there. Coleridge says he was once sent a job application by a young woman who enclosed a photo of herself topless.

Mail on Sunday columnist Alexandra Shulman, who was Vogue editor for 25 years, says: ‘I have very sentimental and nostalgic feelings about Vogue House. It became famous as magazines became more important and magazine personalities grew during the 1980s and 1990s.’ 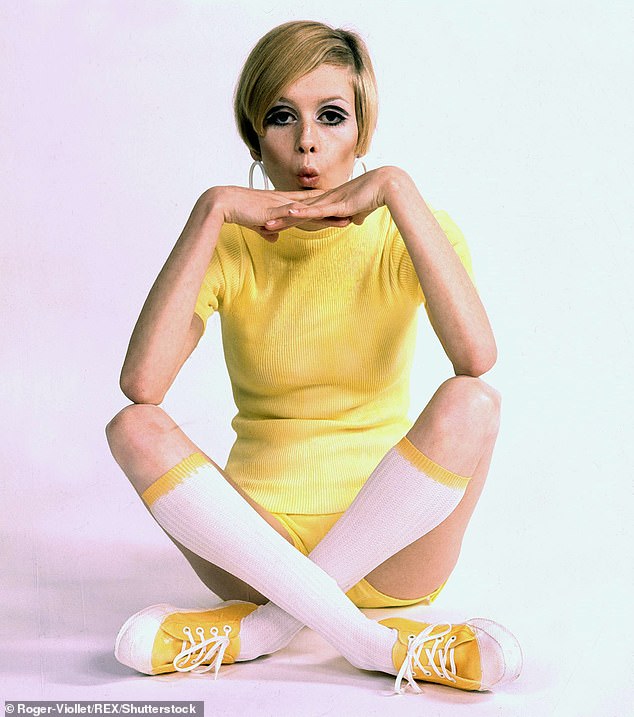 Before the Princess, the offices were frequented by all the big names of Britain’s fashion world – Jean Shrimpton, Lord Snowdon, Twiggy (pictured), David Bailey and so many more

She recalls how, as a young secretary, she and others would go on to the roof at lunchtimes to sunbathe ‘draped in olive oil and lemon juice’.

The building’s location has always been a huge part of its aura.

Shulman explains: ‘It’s near Soho, Carnaby Street, Mayfair and Covent Garden. It was always nice to see what the building meant to so many people. You’d see young Japanese girls outside taking selfies, which was sweet.’

Inside, ghosts of the past continue to stalk the hallways. In his memoir, The Glossy Years, Coleridge told how Princess Diana ‘found it very embarrassing to go to shops in Sloane Street or in Bond Street and try on clothes by a designer and then buy nothing’, so she struck an arrangement with Vogue.

He added: ‘If she wanted to try a new designer, the magazine would call in quite a lot of clothes from that designer for her to try on.

‘And then the fashion editors would look at them with her and they would say, “You know we think you look great in this one, this one I don’t think works quite so well, this one is marvellous.” ’

Only after Diana had made her selections – one of which was cattily described by a Conde Nasty as making her look like an ‘Aeroflot air stewardess’ – would her staff contact the designers.

The Princess even attended boardroom lunches. One was held the day after a picture of her sunbathing topless appeared on the front page of a red-top tabloid.

Coleridge recalled: ‘The Princess looked fabulous. She was very tactile. It was unexpected. Diana touched your elbow, your arm, covered your hand with hers. It was alluring. And she was disarmingly confiding, speaking without filter.

‘She said to me, “Can I ask you something? Please be truthful. Did you see the photograph of me in the Daily Mirror? The topless one?

‘ “William rang me from Eton. Poor boy. He was upset. He said some of the other boys were teasing him, saying my t**s are too small.” She held on to my elbow, adding, “Please be frank, I want to know your real view. Are my breasts too small, do you think?” ’

Coleridge said he went ‘as red as a guardsman’s tunic’ and stuttered: ‘Er, Your Royal Highness, in as much as I can see under your suit, they seem, um, perfect to me. I wouldn’t worry.’

Diana responded: ‘Thank you, Nicholas. I knew you’d tell me the truth. Thank you, I feel better now.’

When Diana left Vogue House, there were four photographers waiting outside. Coleridge rang a friend to try to discover who had tipped off the paparazzi. He learnt that the Princess had told them herself, phoning them from her car on the way to lunch.

A less sympatico Royal visitor was Prince Andrew who, during one lunch, bored fellow guests with a 30-minute description of reversing a ship into a port.

Photographer David Bailey recalls the sixth-floor photo studio where he first met model Jean Shrimpton. His captivating pictures of her launched both their careers.

He said: ‘I fell in love with Jean from the moment I met her. The attraction was mutual, although I was an odd choice for her. She was posh and socialised with public schoolboys who were all known by their surnames. I was a working-class boy from the East End.

‘The first thing I noticed was her eyes. She had great legs as well.

Conde Nast chief executive Roger Lynch said: ‘My hope is we start using both spaces interchangeably and our teams begin to work more closely together.’

If the days of Vogue House are numbered, it proves the wisdom of one of Anna Wintour’s memorable sayings: ‘Fashion’s not about looking back. It’s always about looking forward.’

He's so golden! Harry Styles enthralls fans with his One Night Only show at Brixton Academy