Carl Woods has revealed he’s still engaged to Katie Price, insisting ‘we never split up’ and their relationship is stronger than ever.

The former Love Island contestant, 33, played down reports the pair had gone their separate ways last month after Katie allegedly cheated by sending ‘flirty’ messages to her ex-fiancé Kris Boyson, 33, from her daughter’s Instagram profile.

He also told MailOnline about the ‘horrific’ trolling he’s received since he started dating the ex glamour model, 43, in June 2020, claiming the abuse has taken its toll on his mental health. 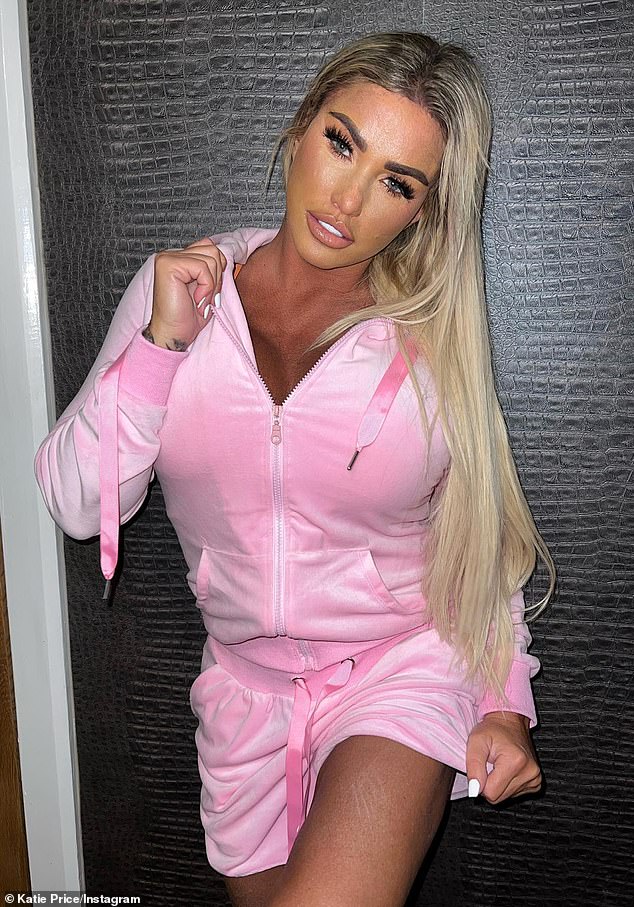 ‘I think the world of her’: Carl Woods has revealed he’s still engaged to Katie Price, insisting ‘we never split up’ and their relationship is stronger than ever

Speaking exclusively, Carl said: ‘There was speculation but I can tell you that neither Katie nor me ever said that we weren’t together.

‘It has been a rollercoaster but she’s a lovely woman, she really is, she’s given a hard time.’

Katie deleted a series of pictures of Carl on her Instagram page, which sparked rumours the couple had split. 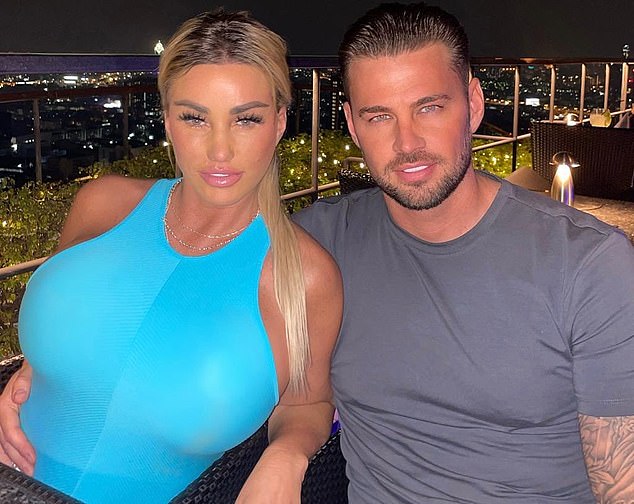 ‘It has been a rollercoaster’: Carl played down reports the pair broke up after Katie allegedly cheated by sending ‘flirty’ messages to ex-fiancé Kris Boyson from her daughter’s Instagram

But Carl insists their relationship hasn’t faltered and claims his upcoming Celebrity MMA show in June has been a welcome distraction from the rumours surrounding the couple’s high profile romance.

He added: ‘I have always been in a happy relationship with Katie, and I am not interested in anything else.

‘I love doing this MMA show because it does affect my mental health and I appreciate having something to focus on.’

Katie teased the pair had reconciled by posting a picture of Carl on her Instagram last Friday – hours after she was seen wearing her engagement ring, which the former Loose Women star had recently taken off. 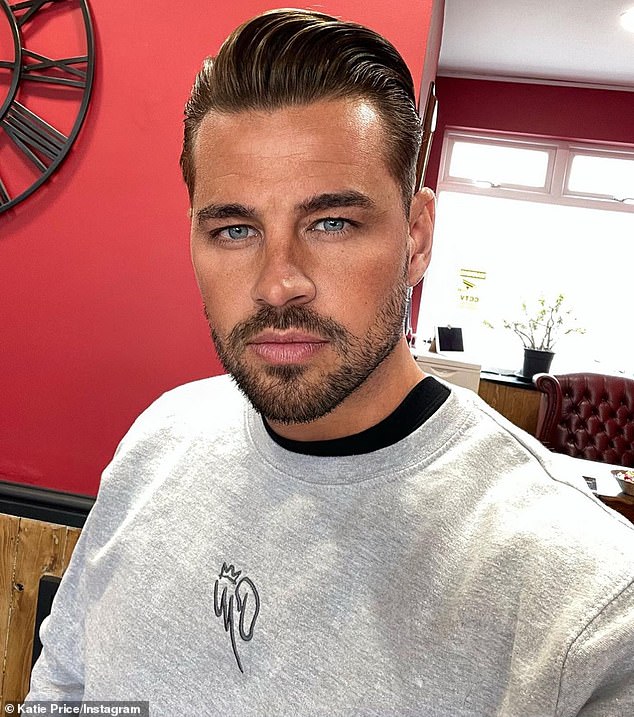 ‘She has a heart of gold’: Katie teased the pair had reconciled by posting a picture of Carl on her Instagram last Friday – after she was seen wearing her engagement ring, which the TV star had recently removed

The post came after Katie jetted off to Spain with Carl to stay in a bargain £101 a night hotel, The Melia in Alicante.

Carl addressed reports the pair had split on his social media, but failed to confirm whether they were still together.

‘They’re so muggy. I’m not involved in it, please nobody tarnish me with the same brush. I think it’s ridiculous – that’s all I’ve got to stay on it.’

Carl is currently training hard for his Celebrity MMA event, which will take place on June 24 at the OVO Arena Wembley.

He is one of 14 celebrities, which also include TOWIE’s James Lock and Love Island’s Theo Campbell, who’ll be competing in the full-contact combat sport.

He admits his preparations, which will last 12-weeks in total, have been gruelling but claims learning how to fight has provided ‘escapism’ from speculation surrounding his relationship with Katie.

‘Training starts at 9am and I get beaten up for three hours and then I’m free to go,’ Carl explained. 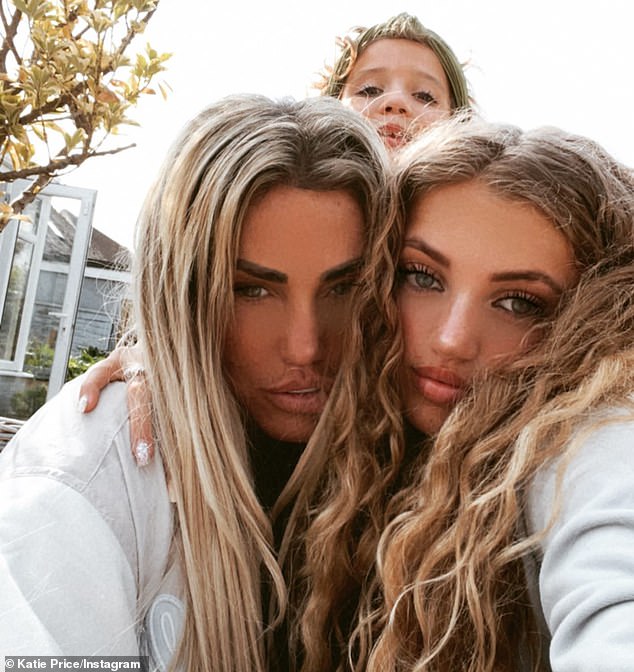 Motherhood: Katie, who’s a mum to son Harvey, as well as Junior and Princess from her marriage to Peter Andre, and Jett and Bunny, who she shares with ex-husband Kieran Hayler, has started wearing her engagement ring from Carl again (Katie pictured with Princess and Jett)

He continued: ‘I find it escapism because I am struggling with my mental health. I go there for three hours and I have nothing else to concentrate on apart from that.

‘We have been training for three days a week with the training camp. I realised how unfit I am – am absolutely so unfit.

‘Day one made me realise that because I was exhausted after two minutes.

‘I used to be right into my fitness as well and Covid happened and all the gyms shut so I didn’t do anything for two years. It’s good to get back into something, there’s an end goal, I can’t no train – I have to do it because I would rather do those days I don’t want to do than going into the ring and get knocked out. 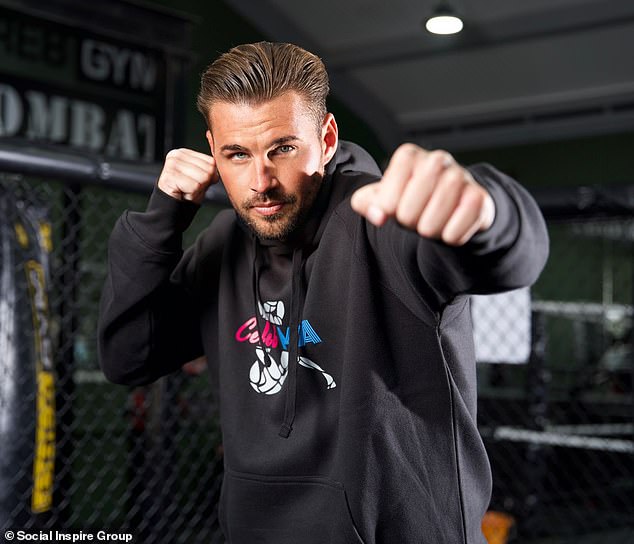 ‘Happy relationship’: Carl insists despite varying reports that he’s a ‘nice guy’ and ‘incredibly loyal’ as he confirms his relationship with Katie is still on

Carl insists getting into shape is purely to benefit him in the ring because he ‘doesn’t need to impress anybody.’

He said: ‘I’m not worried about having a six-pack… six packs are for children. I am not interested or going into this fight worrying about what I look like when I take my shirt off.

‘I don’t need to impress anybody. I’m there to do a job and impressing will be knocking the guy out and winning the fight – not about how good I look with my top off.

‘I am a pretty boy and well groomed but I have grown out of caring about what my body looks like. I’m not worried about taking my top off – I’m not there for that.’ 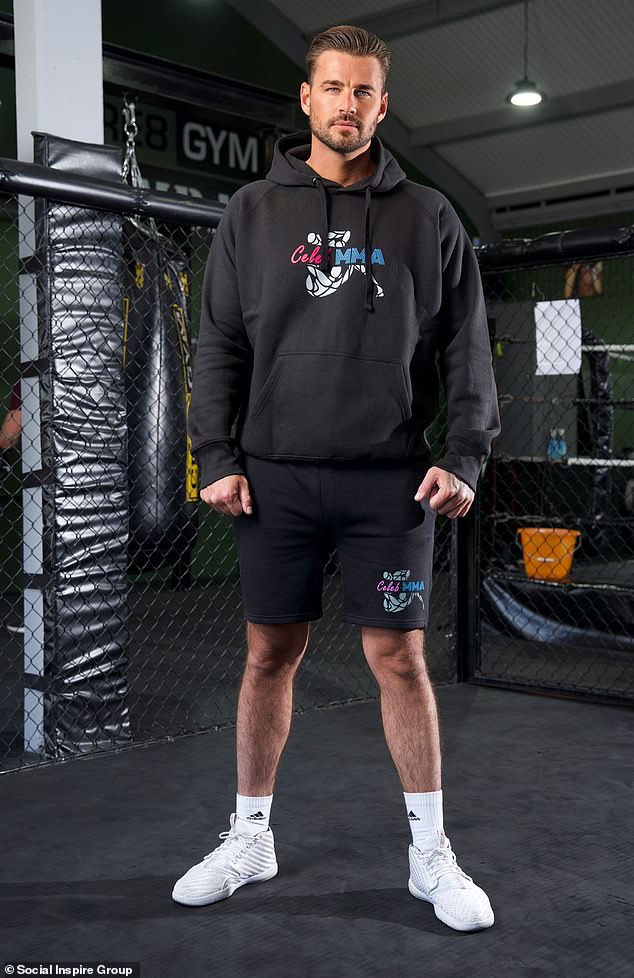 ‘Horrific trolling’: Carl, who still works as a car dealer on the weekends, says taking part in Celebrity MMA has given him a new ‘purpose’ after he struggled with his mental health

And he also says his mental health – sparked by online trolling – has improved since he started training.

He added: ‘I have experienced horrific trolling by people that don’t have a clue and have never met me.

‘The MMA show I’m doing is to raise awareness for mental health because everyone competing is suffering to some degree. It will give me the chance to show who I am. I want people to understand the real me. I am a nice guy and I always have been and I do my best by everyone… I am incredibly loyal.’

The car salesman had been charged under Section 4 of the Public Order Act following an incident at his home in Little Canfield, Essex last year.

Colchester Magistrates’ Court was told the charge followed an argument that spilled over into the street, disturbing neighbours.

At one stage Carl was seen trying to force open a door, the court heard.

Carl was arrested after Katie was allegedly punched in face on August 22, 2021.

The reality star is set to face trial after denying the charges and if found guilty could be sentenced to a maximum of six months in prison.