CDC investigates 29-case E. coli outbreak across Michigan and Ohio that has caused nine hospitalizations: Officials have NOT yet identified what food is the source

Twenty-nine people have been infected with E. coli across Michigan and Ohio in the latest outbreak to hit the United States, health officials revealed Wednesday.

In an alert the Centers for Disease Control and Prevention (CDC) said nine of the patients had been hospitalized after being infected over the two weeks to August 8. No deaths have been reported.

Health officials are yet to detect the source of the outbreak, but it is thought to be tied to a food item. The bacteria is caught by ingesting contaminated food, which may include ground beef, unpasteurized milk or even salad packages.

An estimated 265,000 Americans are infected every year with E.coli, suffering symptoms including bloody diarrhea and vomiting. About 100 people die from the disease annually.

It comes after more than 120,000lbs of ground beef was re-called in April over fears they were contaminated with E. coli. Four outbreaks were spotted last year in items including packaged salads and cake mixes.

The above map shows the two states that have detected E. coli in the latest outbreak. They are Michigan and Ohio 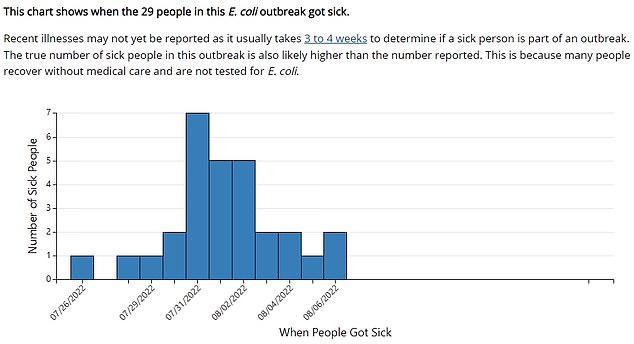 This shows the number of cases detected over time. The CDC says this is likely to rise as more cases are uncovered. They currently date to August 6

Testing by the CDC revealed all the patients were infected with the O157:H7 strain, the most common strain that causes a severe intestinal infection in humans.

Each patient’s bacteria is closely related, suggesting that ‘people in this outbreak got sick from the same food,’ the CDC said.

More cases are expected to be detected in the coming days and weeks as officials work to identify the source.

To determine which foods may be causing the outbreak, patients are being interviewed about what they ate the week before they got sick.

Should a food item be identified, investigators may issue a re-call for the product. 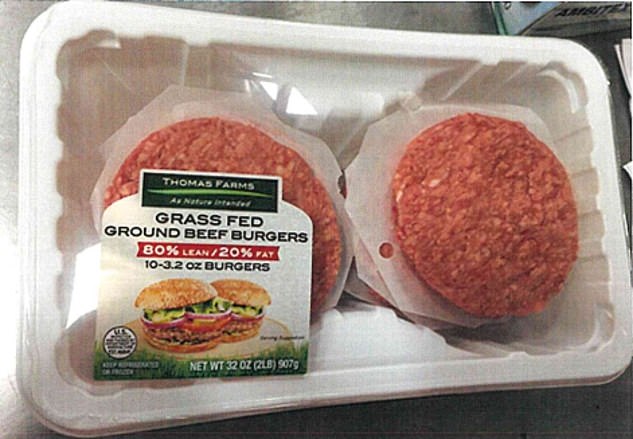 The U.S. Food Safety and Inspection service recalled 120,000 pounds of ground beef in April over fears it was contaminated with E. coli

WHAT IS E. COLI AND WHY IS IT DANGEROUS?

E. coli (Escherichia coli) are bacteria that generally live in the intestines of healthy people and animals.

This is a condition in which there is an abnormal destruction of blood platelets and red blood cells.

According to the Mayo Clinic, the damaged blood cells can clog the kidney’s filtering system, resulting in life-threatening kidney failure.

No treatment currently exists to treat these infections. They usually disappear within one week, but medical professionals recommend resting and drinking fluids to help prevent dehydration and fatigue.

In most cases people recover within a week or so but, rarely, they may go on to develop a more serious disease requiring hospital care.

Sufferers can develop a type of kidney failure called hemolytic uremic syndrome (HUS), where there is an abnormal destruction of blood platelets and red blood cells.

These can then clog the kidney’s filtering system, leading the organ’s to fail — and sparking a potentially life-threatening situation.

In April this year more than 120,000 pounds of ground beef was recalled over fears that it was contaminated with E. coli.

The U.S. Food Safety and Inspection Service (FSIS) urged people with Naturally Better, Nature’s Reserve or Thomas Farms-labeled burgers and mince in their fridge to throw it out or take it back to the store.

No reports were received of people falling ill or suffering an adverse reaction after accidentally eating the contaminated meats.

But the bacteria had been detected at a production plant during routine testing.

Three of which were with the strain O157:H7.

The outbreaks resulted in a total of 63 cases being recorded, of which 26 people were hospitalized.

Two died from their infection.

The CDC estimated 265,000 Americans catch it every year in response to a question on how common the disease is.

But of these cases it says only about 36 percent — or 95,400 — involve the strain that is most likely to make you sick.

Many people who become infected with the bacteria do not seek medical care unless they need to be hospitalized.

How the 'Davina effect' has sent HRT demand soaring