Masks could soon become a thing of the past all around America. There are reports that the Centers for Disease Control and Prevention (CDC) is planning to drop its indoor mask guidance for many parts of America.

A scientist involved with the decision told CNN a move is to be announced Friday afternoon. Currently, the CDC recommends indoor masking in any area deemed to be of ‘high’ or substantial’ Covid transmission. As of Friday morning, 95 percent of U.S. counties fall into either of those categories.

The CDC is planning to update the metrics that determine whether a U.S. county is suffering ‘high’, ‘substantial’, ‘moderate’ or ‘low’ levels of transmission. While counties that are of ‘high’ and ‘substantial’ transmission will still be recommended to mask indoors, the number or counties that fall into these figures will fall substantially.

This is because the Omicron variant has changed the nature of COVID-19 in America. Previously, large infection figures spelled a lot of danger for the nation. The now-dominant strain is highly infectious yet mild, though, meaning that case figures alone no longer properly indicate danger. These categories were based off of data from the original strain of the virus as well, which was not as infectious as Omicron.

When changes go into effect, hospitalizations related to the virus and hospital capacity will be included in the metrics as well. 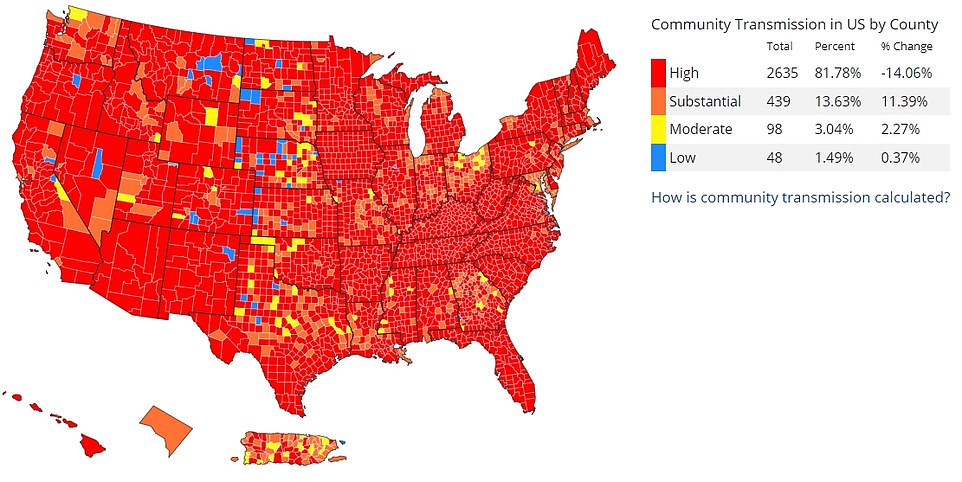 As of Friday morning, the CDC considers 95% of American counties as being of ‘high’ or ‘substantial’ transmission. The CDC recommends indoor mask mandates for each of those counties. The agency will change the calculation of these metrics to bring that figure down starting Friday, reports state. 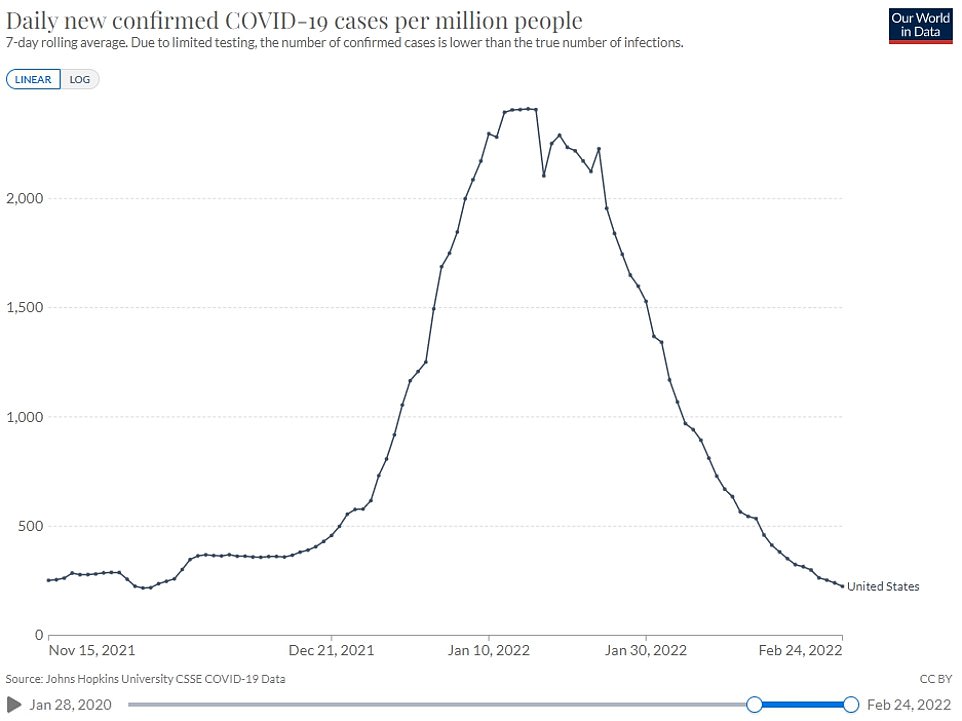 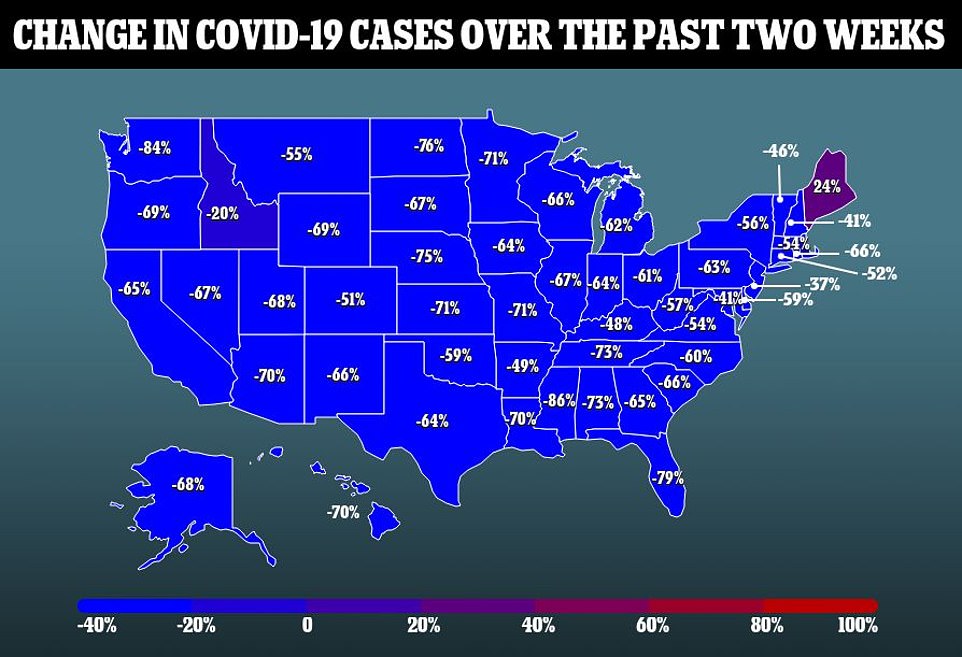 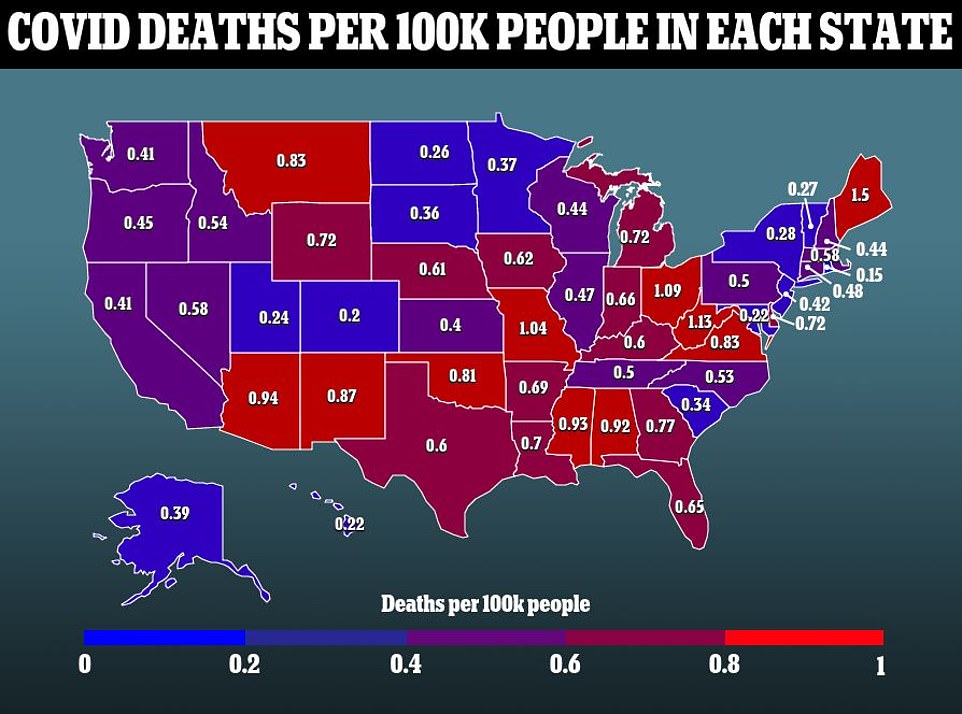 Case, death and hospitalization figures have cratered in recent weeks, and the revised CDC categorizations will likely reflect that. Currently in the U.S., 75,549 people are recording an infection every day. This is a 35 percent fall over the past week, and a 92 percent drop since the Omicron surge peaked at 800,000 cases per day in mid-January.

Deaths are finally starting to plummet as well. On average, 1,742 Americans are dying from Covid daily, a 20 percent drop over the last seven days and a 30 percent drop for the peak of the Omicrons surge when around 2,500 Americans were succumbing to the virus daily.

Hospitalizations are generally an unreliable metric. Studies have found that anywhere from 25 to 50 percent of recording COVID-19 hospitalizations are actually people who were receiving treatment for another condition but tested positive while present. That figure is dropping as well, though, another sign of Covid transmission dropping overall.

On average, 57,544 hospitalizations with Covid are recording every day, a 44 percent drop over the last 14 days.

To what levels the CDC will adjust these categories, and how it will effect the number of Americans still recommended to be subjected to mask mandates is unclear, though reports hint that it will a significant shift. 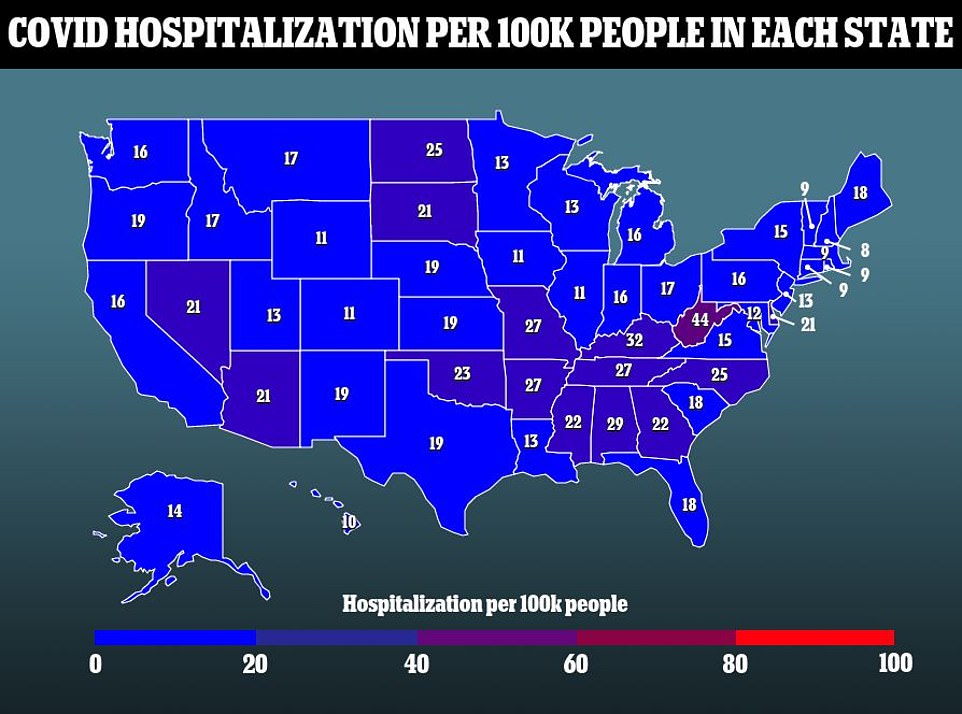 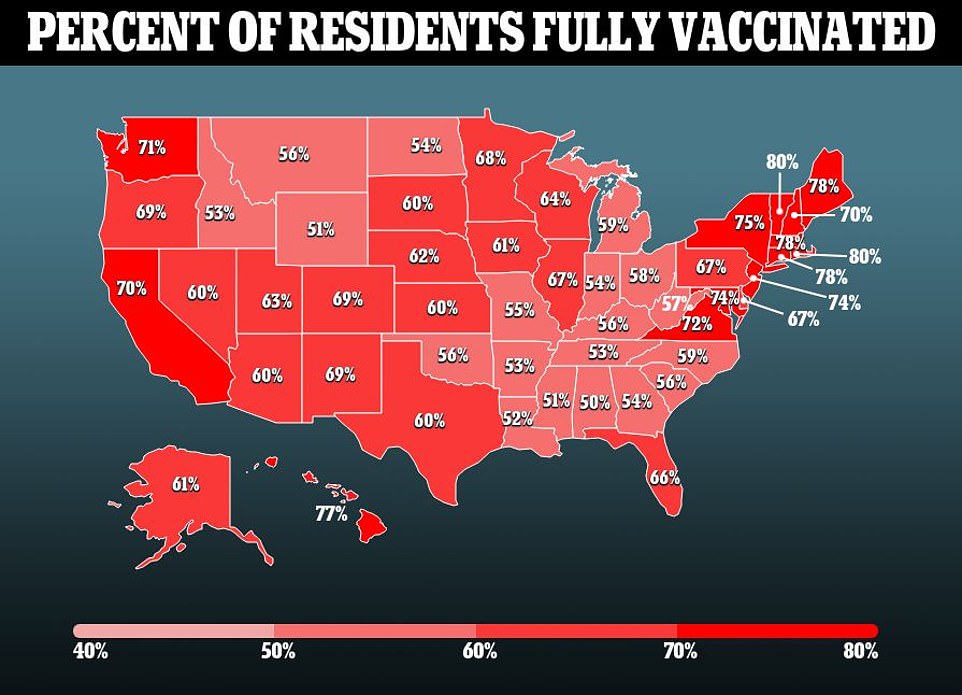 Decisions on where the mandates actually apply will come down to local leaders for the most part, though. While the CDC can make decisions on a federal level – like requiring people to wear masks when travelling via airplane or long distance rail – indoor mask mandates for venues like stadiums, restaurants and retail stores are set on a state-by-state, sometimes county-by-county, basis.

Preceding this move by the CDC, nearly every state in America has taken matters into its own hands and decided to lift mask mandates no matter what the federal government says. 49 of 50 U.S. states have either have dropped public indoor mask mandates, relaxed them, or have announced plans to do so in the future.

Hawaii is set to be the only state left to require masks in indoor public places, no matter a person’s vaccination status. The state has had some of the strictest pandemic-related restrictions in America for much of the past two years.

Many red states have dropped Covid entirely, lifting all restrictions and in many cases even banning county and city level leaders from requiring masks or vaccine checks. Blue states have been more cautious, but there are signs that they are putting the pandemic behind them as well.

Last week, California Gov Gavin Newsom announced that his state – the most populous in America- will soon transition into treating COVID-19 as an endemic, moving on from the pandemic as the state marks two years since the first cases of the virus were detected in the U.S.

Cases in California have dropped 80 percent over the past two weeks and only 24 of every 100,000 residents are testing positive for the virus daily. 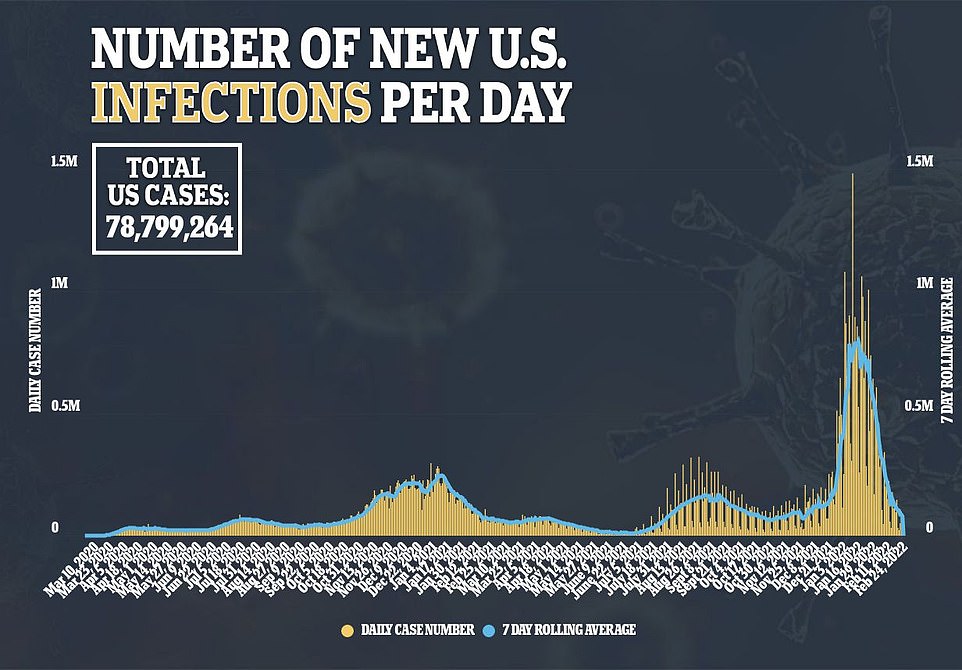 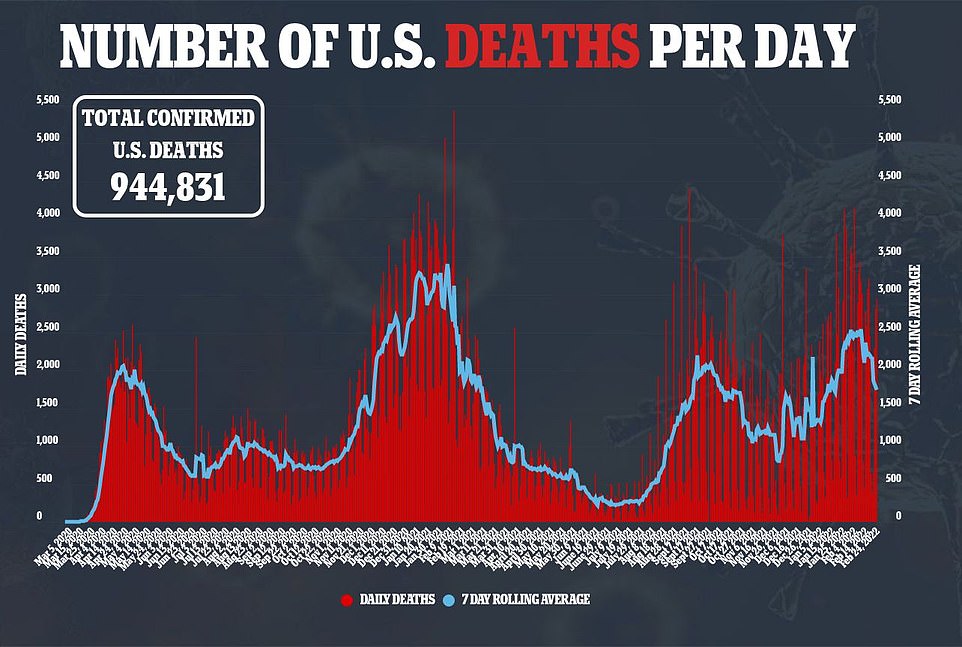 ‘We are moving past the crisis phase into a phase where we will work to live with this virus,’ Newsom said at a news conference announcing the ‘Smarter’ plan on Thursday.

‘People are looking forward to turning the page,’ he added. ‘They also need to know we have their back, we’re going to keep them safe, and we’re going to stay on top of this.’

California is now the first U.S. state to declare the virus ‘endemic’, and the nations most populous state now joins a growing list that have begun to rollback mandates as cases continue to decline. 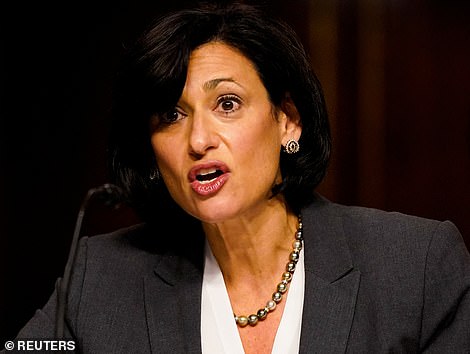 Dr Rochelle Walensky (pictured), director of the CDC, acknowledged Americans wanting to lift mask mandates last week. Her agency is reportedly set to change Covid metrics Friday in an effort to lift them

Newsome rolled back his states indoor mask mandate for vaccinated residents in mid-February, though he left options open for county and city level officials in the state to reapply mandates at their own discretion.

While nearly all blue states, like California, have lifted these mandates for a majority of indoor public spaces, masks are still required in many schools. School mask mandates are one of the most controversial policies in America at the moment, and some states like New York, Delaware and Maryland still requiring children to mask at school, with no end date set.

Federal leaders have been hesitant to lift mandates, though. Last week, CDC Director Dr Rochelle Walensky said that she understood that Americans want to ditch masks, but did not commit to following along with states that made choices to remove them.

‘We want to give people a break from things like mask-wearing when these metrics are better, and then have the ability to reach for them again should things worsen,’ Dr Rochelle Walensky, director of the CDC, explained at last week’s briefing.

‘If and when we update our guidance, we will communicate that clearly. And it will be based on the data and the science. 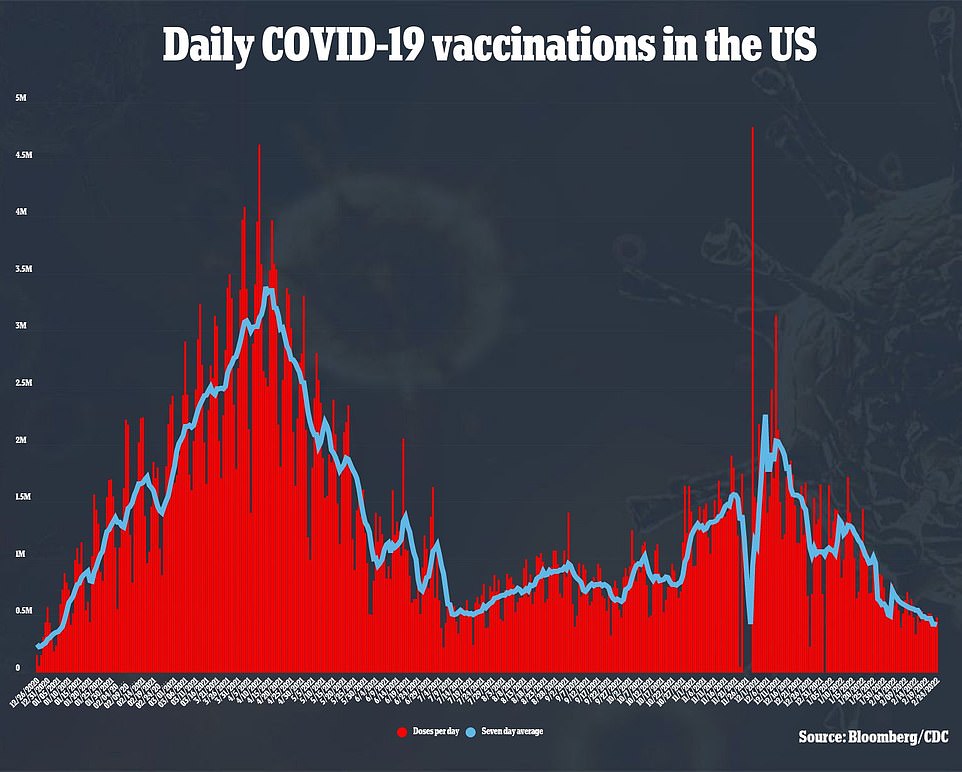 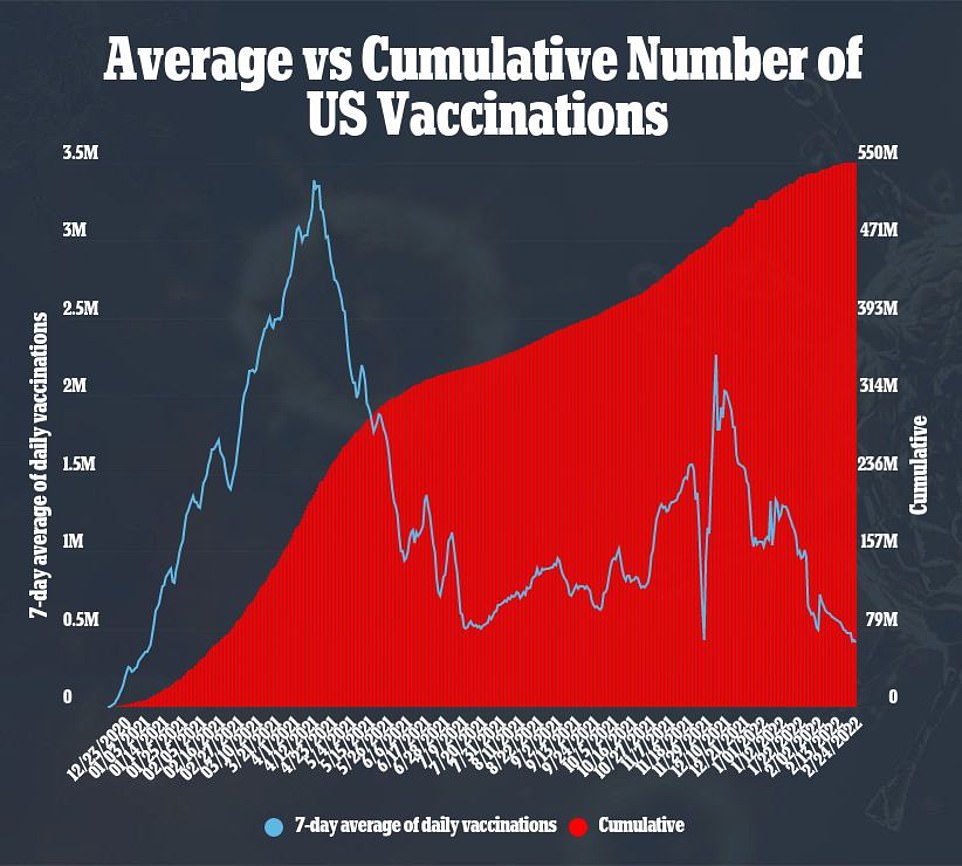