When Britons pop bottles of bubbly this Christmas and New Year, Andrew Carter believes there is a higher chance than ever that their fizz will be home-grown.

The English wine industry, the chief executive of Chapel Down says, has reached its tipping point.

After years of establishing its reputation, winning awards and tempting international buyers to sample South East fizz, it is now ramping up on an industrial scale. 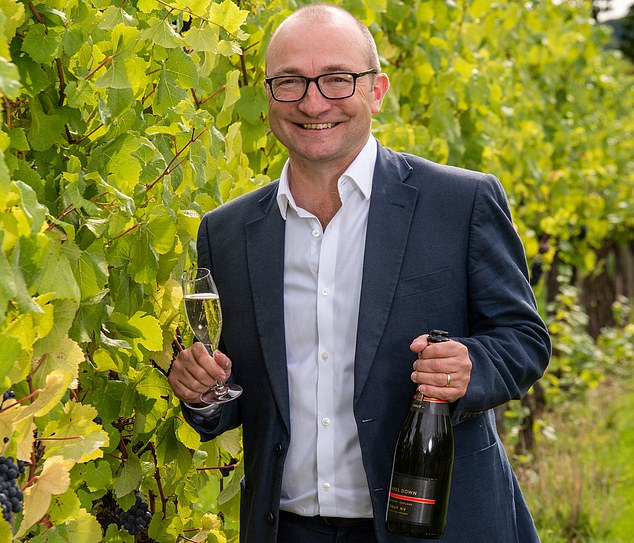 It also helps that English sparkling wines are still on average 20 to 25 per cent cheaper than Champagne, he admits.

‘This year more people know that they can buy English without settling for a lesser product and with change to spare – we want to be the choice for those who might once have plumped for Champagne.’

Chapel Down is the most established name in the UK industry, which is centred around Sussex and Kent, where the terroir is the same as their French arch-rival’s.

At the company’s Kent countryside headquarters in Tenterden, behind rows of carefully tended vines, a series of huge stainless steel fermenting tanks has been hauled into place

‘We’re producing about one and-a-half million bottles a year at the moment,’ beams Carter. ‘These 17 tanks will allow us to double the size of our business in the next five years.’

Carter joined Chapel Down, the country’s largest wine maker, in September 2021, just in time for harvest.

He took over from former chief executive Frazer Thompson, who joined what was then a minnow 20 years ago to ‘prove something to himself’ after years spent in the big-league drinks industry.

At that time, the idea that England could become a bona fide rival of Champagne and Prosecco was a pipe dream.

As a result, many vineyards have been passion projects rather than businesses, according to Carter.

‘English wine is made up of plutocrats and hobbyists principally,’ he says. ‘And, no offence to my fellow wine makers, but there’s a certain breed of people who have entered into English wine.

‘As we move forward, you’ve got to commercialise it. You’ve got to run it as a proper big business, build a brand.’

There’s another key facet, he says. ‘You’ve got to make money.’

Chapel Down is no stranger to the backing of wealthy businessmen. Its largest shareholder is City veteran Lord Michael Spencer’s IPGL investment company, while Sir Nigel Wray is a backer and board member.

Since joining, Carter has reshuffled several top roles, including bringing in a former head honcho from his team at Chase Distillery and hiring finance boss Rob Smith, who started in September, from PwC – a perhaps unlikely hire for an English winemaker.

‘I think the previous team had done a great job for the best part of 20 years. When you come in as CEO you naturally want to put in place your culture,’ says Carter.

Doubling the business over the next five years requires a change. ‘What that needs and means is a different type of financial mindset in a finance boss.’

The company sold its failing beer business, Curious Brewing, before Carter joined. He is now putting the focus back on sparkling wine.

A 50-50 split between sparkling and still last year is set to change to 70-30. Carter is also mulling moving the business from the challenger Aquis Exchange to AIM, the junior market of the London Stock Exchange. Doing so would help it to raise more cash, which he says may be needed in the future. 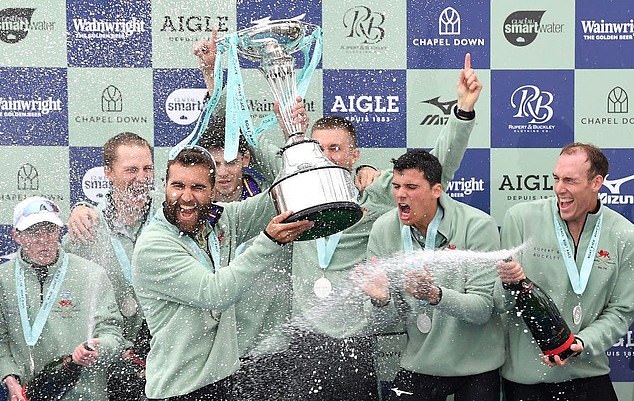 Partnership: Chapel Down is a sponsor of the annual Oxford vs Cambridge university Boat Race

The group already has a ‘whole army of retail shareholders’, which helped it to raise £6.9million last year. Some of this has been earmarked for a new winery it is looking to build in Canterbury.

A listing on AIM could also bolster the company’s shares – since Carter joined Chapel Down’s market value has tanked from £85million to around £56.5million now.

Family: Married to Kay, who is a teaching assistant. They have three grown-up children

Favourite NON-Chapel Down drink: Guinness at the races or Penfolds Bin 389 with a Sunday lunch

Favourite TV show: ‘I’m a real binge watcher. 24 was probably the best ever’

Holidays: Swings between ‘doing absolutely nothing apart from eating tapas and drinking rioja’ to adventure-packed safaris or driving round Australia.

In the long run, this should help it to ramp up from 1.5m bottles of wine a year to 9m, which is the same as the entire English wine industry churned out last year.

This is not Carter’s first foray into wine. His career history sounds more like a pub bar than a CV – having worked with Bacardi, Bombay Sapphire, Strongbow, San Miguel, Grey Goose and Bulmers.

Most recently, he spent four years as the managing director of Chase Distillery, which was then snapped up by FTSE 100 group Diageo.

Carter and Thompson were introduced by Chapel Down chairman and former Football Association chief executive Martin Glenn. Seeing as his last leadership role led to his company being sold, have there been any takeover offers for Chapel Down?

‘I can categorically say there haven’t,’ he says. ‘And I’m not expecting that to be the way in which we’re funded.

‘With the support we have from our investors and shareholders, that’s very unlikely.’

He would much rather Chapel Down was ‘leading the charge’ and being the company taking over its competitors. Carter is cagey on whether there are any in the pipeline, but says deals that grow the firm are a ‘stated aim’.

There are a number of other rival producers – notably Gusbourne, Nyetimber and Rathfinny – but Carter says there is more to gain from working together while the sector is at this nascent stage.

‘Whilst people are competing over English wine companies for a share of the market, we don’t see them as the main competitors. Our competitor is Champagne.’

But for the home-grown industry to hit the big leagues, it needs more of a tourist industry. Many wine makers – particularly in Sussex – have cottoned on to the need to add accommodation if they are to cater for Napa Valley-style visitors, rather than people on day trips from London.

Chapel Down’s Tenterden HQ is open for the public to roam around, offers wine tastings and has an AA Rosette and Michelin Bib restaurant called The Swan.

‘We could expand the tasting rooms, do something to the restaurant or put in accommodation – we’ve got the ability to put tree pods and rooms in and around the winery.’ Vines have been planted in England since the Roman era, but the push in the last 50 years has attracted foreign fans.

In terms of customers, Scandinavians, Americans and the Japanese are keen – but exports only make up around 4 per cent of current industry sales. The competition is also moving closer, with international growers increasingly likely to look at setting up hubs in South East England, which has the same terroir as France’s Champagne region and an ideal climate due to the effects of climate change.

The patchwork nature of the Kent and Sussex countryside might make it hard for producers to buy huge swathes of land – though big-hitters such as Taittinger have already snapped up sites. ‘Particularly from a French point of view, the nature of their weather events are getting more and more dramatic, such as extreme frosts,’ Carter says.

‘Whether it’s the guys in Champagne or an Australian company, they will be looking at the world map and thinking: “We need to have a presence at some point in the UK.”’

Share
Facebook
Twitter
Pinterest
WhatsApp
Previous articleEmily Ratajkowski bundles up in a chic black fur coat as she walks her dog Colombo in New York City
Next articleDOMINIC MIDGLEY: How have the hellraisers of Fleetwood Mac survived so long?
RELATED ARTICLES
Business