Joe Biden, 79, has come under fire from an ex-GOP Governor after the 46th President announced the US would impose sanctions on Russia. The POTUS’ decision to introduce sanctions came just one day after Russian President Vladimir Putin, 69, said Moscow recognised two regions in eastern Ukraine as breakaway states.

Mr Biden, who described Putin’s actions as a “flagrant violation of international law”, unveiled his plans on Tuesday.

This included sanctions on the significant Russian financial institutions Vnesheconombank and Promsvyazbank.

Mr Biden also expanded sovereign debt prohibitions, which look set to limit access to US markets and investors, introduced full blocking sanctions on five Russian elites and said any institution in the Russian financial services sector would be a target to further sanctions.

The ex-Ambassador to the UN said: “President Biden promised a ‘swift and severe’ response.

“He did not deliver.”

Ms Haley, who has been tipped as a potential Republican nominee in 2024, added: “Ukraine is a test of western resolve.

“It’s not just about Putin.

JUST IN: Putin health fears: ‘Lonely’ President could be ‘seriously ill and treated with steroids’ 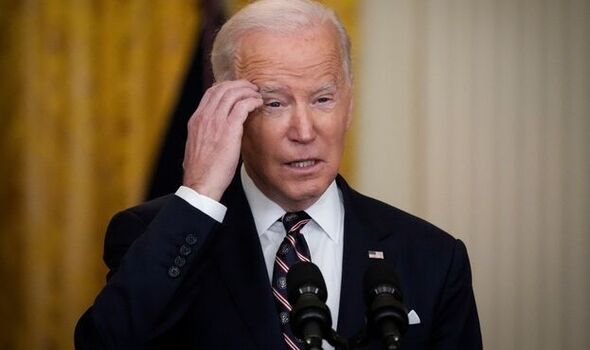 “The Chinese communists and Iranian jihadists are watching too.

Despite Ms Haley’s comments, many experts suggest recent events in east Ukraine have posed a dilemma for the relationship between Beijing and Moscow.

According to Dr Yu Jie from Chatham House, the crisis had caused a “sticky point”.

However, Mr Biden’s predecessor Donald Trump, 75, only continued with the GOP pile on.

The 45th President said in a statement: “If properly handled, there was absolutely no reason that the situation currently happening in Ukraine should have happened at all.

“I know Vladimir Putin very well, and he would have never done during the Trump Administration what he is doing now, no way!

“Russia has become very very rich during the Biden Administration, with oil prices doubling and soon to be tripling and quadrupling.

“The weak sanctions are insignificant relative to taking over a country and a massive piece of strategically located land.

“Now it has begun, oil prices are going higher and higher, and Putin is not only getting what he always wanted, but getting, because of the oil and gas surge, richer and richer.

“The US was energy independent under the Trump Administration, an independence that we had never obtained before, and oil prices would have remained low.

“Now, what a mess our country is in!”

Mr Trump, who may yet launch a bid for the White House in 2024, also went on to tell a right-wing radio show he thought Mr Putin was a “genius”.

The ex-POTUS said: “I went in yesterday and there was a television screen, and I said, ‘This is genius’.

“So, Putin is now saying, ‘It’s independent,’ a large section of Ukraine.

“I said, ‘How smart is that?’ And he’s gonna go in and be a peacekeeper.

“That’s strongest peace force … We could use that on our southern border.”

He added: “You gotta say that’s pretty savvy. And you know what the response was from Biden? There was no response.”