Chloe Sims, 40, reveals she has a secret boyfriend

Chloe Sims has revealed that she’s dating a mystery man who’s ‘not in the public eye’ as she opened up about being ‘ok’ if she doesn’t end up having any more children.

The reality star, 40, added her daughter Madison – who just turned 17 – ‘loves being on her own’ as the ‘baby’ of the family.

Speaking to MailOnline at the Nella Rose launch party with PrettyLittleThing in the Nest Rooftop Bar, London, she said that her mentality is now ‘very different’ to ten years ago, and that she doesn’t ‘care about age anymore’. 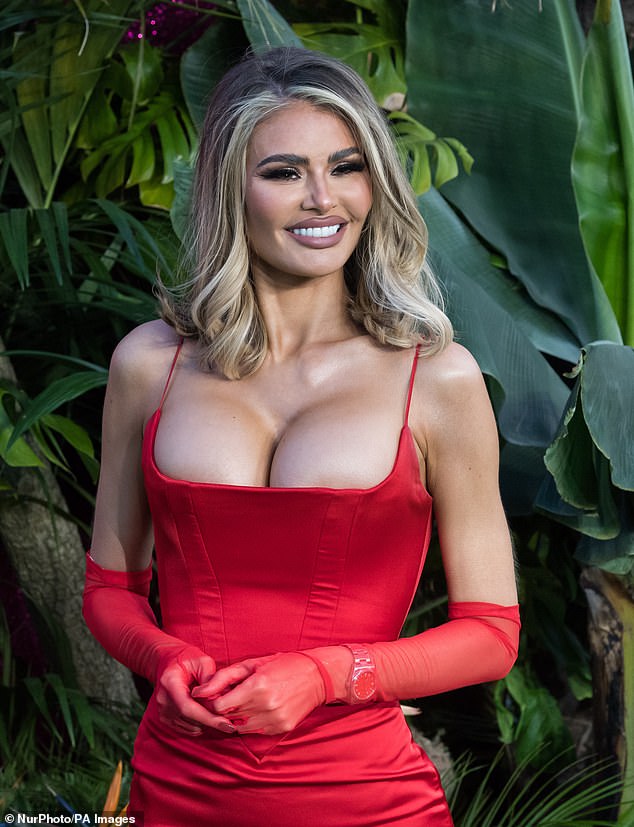 Candid: Chloe Sims, 40, has revealed that she’s dating a mystery man who’s ‘not in the public eye’ as she opened up about being ‘ok’ if she doesn’t end up having any more children. Pictured in March

The long-time TOWIE alum said: ‘I used to be really stuck on things have to do be done at a certain age, but I think in the era we live in, we don’t have to be settled down, and I do think you can’t have everything.

‘I’ve got an amazing family and friends, so I’ve got a lot of love in my life.

‘Yes, I would absolutely love to get married and find my soulmate, but if that doesn’t happen – it’s ok.’ 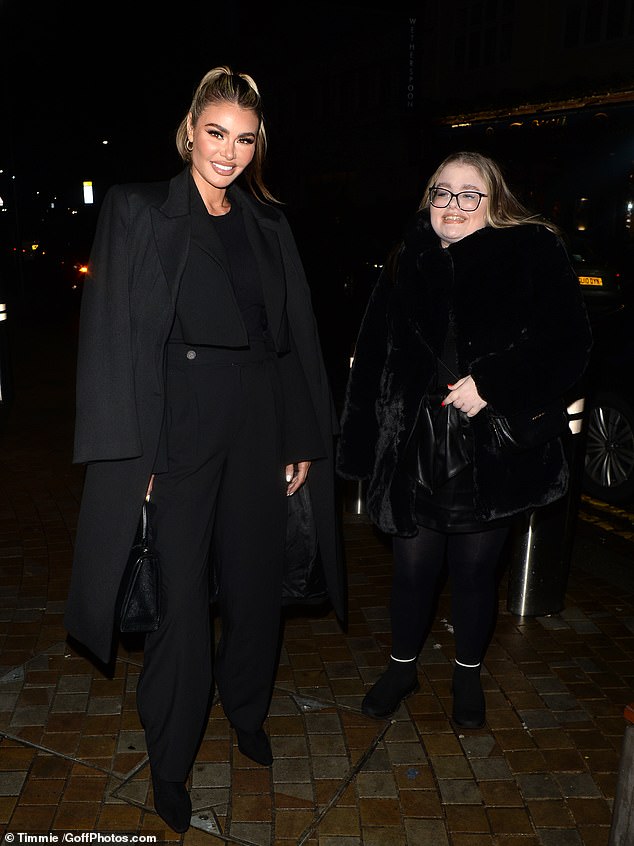 Family: The reality star, 40, added her daughter Madison – who just turned 17 – ‘loves being on her own’ as the ‘baby’ of the family (pictured in December)

Chloe also said that because she had ‘literally just turned 23’ when Maddy was born, the star in past always ‘presumed that (she) would meet somebody and get married and have more children’.

‘But it hasn’t panned out like that,’ she added. ‘And to be honest with you, if I don’t have any more children – that’s ok.’

Madison – often referred to as Maddie – is Chloe’s only child with her ex Matthew, who she dated for seven years.

The TV personality continued: ‘I don’t see babies and get broody over them. I love babies don’t get me wrong, but I don’t have the desire to have children, but if I was with the right person, and they didn’t have children then I would definitely consider it if I can. I’m 40 now, so I don’t know how that would go.’

However the glam influencer added she doesn’t feel pressured to give Maddy a sibling as her daughter is ‘used to being the only child’.

‘When I joke with her and say I’m going to have another baby, she gets the hump. She doesn’t like that thought,’ the star revealed. ‘She’s used to being the only child, and she’s the only baby on both sides of the family – apart from Demi. Demi thinks she is the baby as well.’ 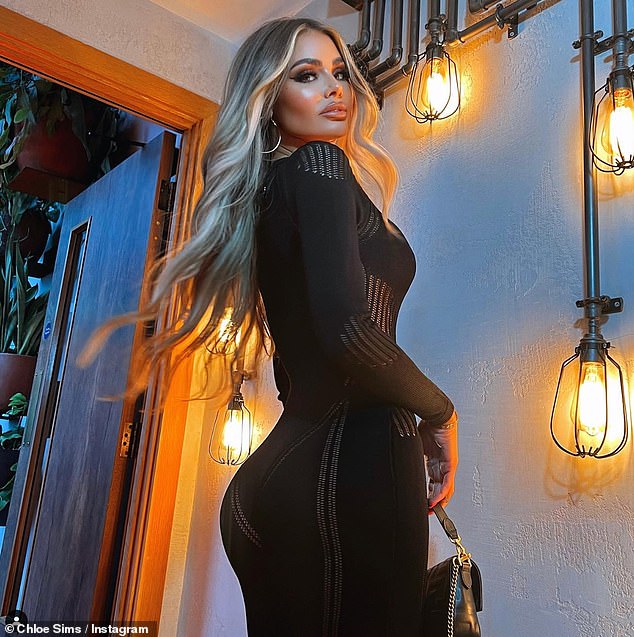 Mature: Speaking to MailOnline, she said that her mentality is now ‘very different’ to ten years ago, and that she doesn’t ‘care about age anymore’ (pictured in June)

Chloe also unveiled that she is seeing someone, but has ‘decided to keep that off camera’.

She also explained the difficulties which come with dating in the public eye and feeling that at times people find her ‘disappointing’.

She said: ‘It is tricky because when you meet people, they don’t sign up for what comes with me, and I lead a really normal life.

‘I know I’m on a TV show, but day to day I live a really simple life and I think that the guys I meet, they expect me to behave like a TV star I guess, and I don’t.

‘And sometimes I think they find that disappointing, because I’m really normal.

‘I like being at home and wearing my pyjamas, I chill and I don’t wear make-up every day. And sometimes I think the privacy thing is a problem as well.’

The star also claimed that she has ‘never been on a dating app’ and likes to ‘meet people organically’.

‘I’m quite an outgoing person, so I don’t know if that’s intimidating, but I do meet people when I’m out,’ she began. ‘To be honest with you I don’t go out that much in Essex – I tend to go out in London, and meet them in bars and restaurants.’

Chloe’s last known relationship was with Pete Wicks, who previously confirmed he had been in a secret sexual relationship with Chloe on and off for two years.

They sparked fresh dating rumours at the end of last year after a red carpet appearance together following a public fallout.

However around the same time, Pete was linked to Celebs Go Dating’s Jessika Power, who later said she’d love to join TOWIE.

In March things seemed to have turned sour between Chloe and Pete as despite previously vowing to stay friends she unfollowed him on Instagram following a reported off-camera fall out. 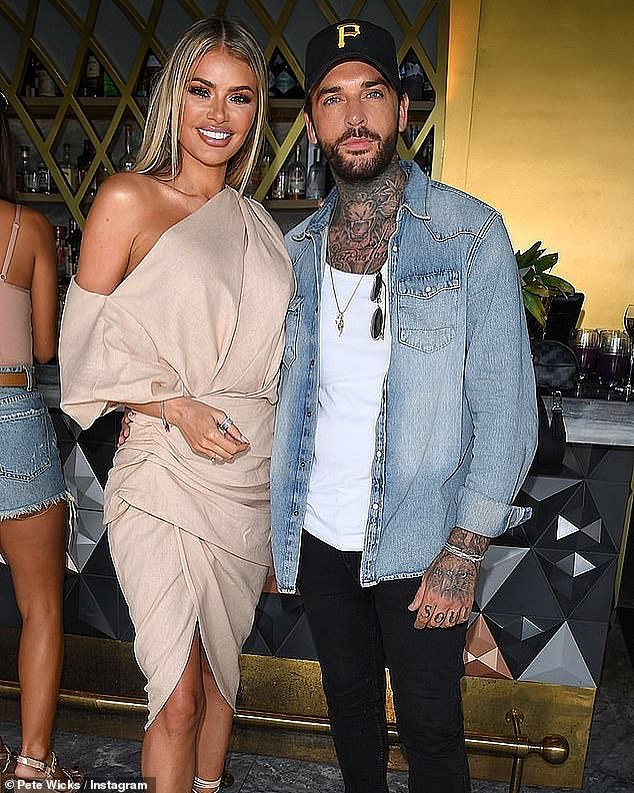 Trouble in paradise: Chloe’s last known relationship was with Pete Wicks, who previously confirmed he had been in a secret sexual relationship with Chloe on and off for two years

Chloe  – whose sisters Demi and Frankie have also appeared on TOWIE – is also cousins with Joey Essex.

Speaking to MailOnline, she touched on the importance of loved ones and said she’d ‘definitely’ like to have a reality show with her family.

She added: We’re a really close family, and life away from the show we socialise together, we’re always out together, and we were out last night.

‘I feel like my best when I’m with my family, plus working in this industry makes you appreciate your family even more, because you make friends with people and they’re not your friends – they’re faux friends.’

The star continued: ‘Don’t get me wrong, I have some beautiful friends, but I think the pandemic changed it.

‘It sounds weird, being away from people – I now like being with my family more. It’s a trust thing and you 100% know that they’ve got your back in any situation and it’s a genuine love.’ 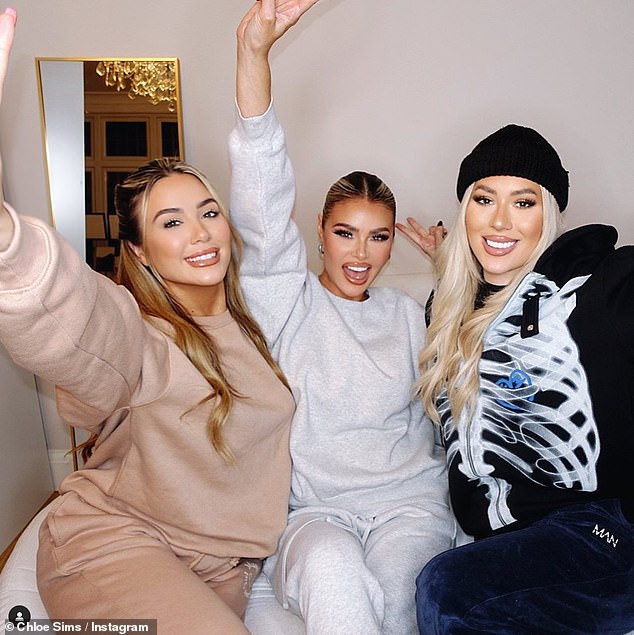 Close: Chloe – whose sisters Demi (right) and Frankie (left) have also appeared on TOWIE – is also cousins with Joey Essex. Pictured in January