Chris Hemsworth has posted a thrilling new trailer for his upcoming Netflix blockbuster Spiderhead on his Instagram.

The hunky Marvel actor, 38, seems excited to share his new film with fans, which debuts on the streaming giant on June 17.

‘Spiderhead is one week away,’ the Hollywood superstar, who was one of the producers of the film, gushed in the post.

Weird science: Chris Hemsworth has posted a thrilling new trailer for his upcoming Netflix blockbuster Spiderhead on his Instagram. Picture: Chis Hemsworth in a scene from the film

The Thor actor swaps his cape and hammer for sharp suits and wire-rim spectacles to play a sinister scientist in the sci-film.

He tests mood-altering drugs on convicts in a state-of-the-art prison complex.

The prisoners have volunteered as medical subjects in order to shorten their sentences. 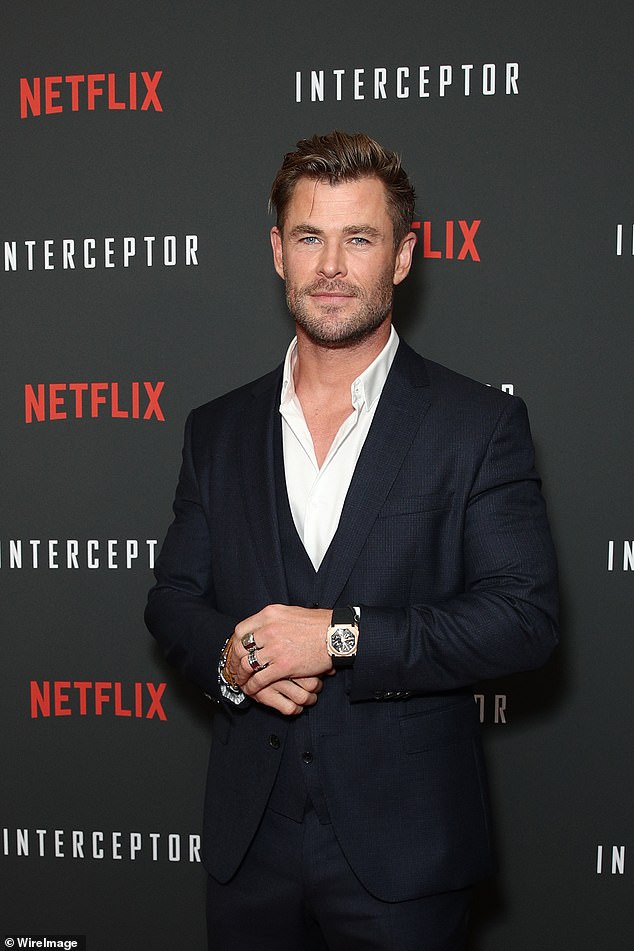 New role: The Thor actor swaps his cape and hammer for sharp suits and wire-rim spectacles to play a sinister scientist in the sci-film

The drugs administered by Hemsworth’s character alters the mood and emotions of the convicts which results in a cruel and unusual punishment.

The new trailer gives fans a teaser of the wicked science involved.

‘This is science,’ Hemsworth character Dr Steve Absneti, says in the preview, ‘and in science we have to explore the unknown’.

Starting out with a view of the Spiderhead facility, which resembles a resort hotel without windows, things soon take a mysterious turn as futuristic gadgets are introduced.

Test subject: Miles Teller (pictured) plays a prisoner who has volunteered as a medical subject in order to shorten his sentence in the film Spiderhead – he takes drugs that alter his mood and emotions which results in a cruel and unusual punishment

Co-star Miles Teller who plays a prisoner, Jeff, seems to respond to the experiment at first, with pleasure: ‘Whoah,’ he says.

Rising star Jurnee Smollet also appears in the trailer, playing a troubled convict, and is shown in one scene trying to scale glass walls.

The action builds to a crescendo of violence and horror before Dr. Steve is seen trying to comfort Jeff, in a dark and evil looking room.

Unconvinced, Jeff replies: ‘Are we?’

Written by Rheet Reese and Paul Wernick of Deadpool fame, the film is based on George Saunders’ 2010 New Yorker short story Escape from Spiderhead and was filmed in Queensland in 2020.

Locations used in the film include the Whitsundays and the Gold Coast.

Sinister: Chris Hemsworth (pictured) plays a scientist who tells his test subjects that he is trying to make the world a better place – the prisoners are not so sure

ALISON BOSHOFF: The behind the scenes dramas of Harry and Meghan's Netflix series

Motorists who listen to music could disrupting harmony on Britain's roads