Chris Noth appears to be trying to make amends after he was seen shopping for groceries on Wednesday in Los Angeles, after being spotted with his wife Tara Wilson the day before.

It was  first time that Noth, 67, had been seen with his wife since multiple sexual assault allegations came to light.

Now it seems as though the embattled actor is focusing on family matters as he was seen with a large haul of grocery items while stepping out from his home. 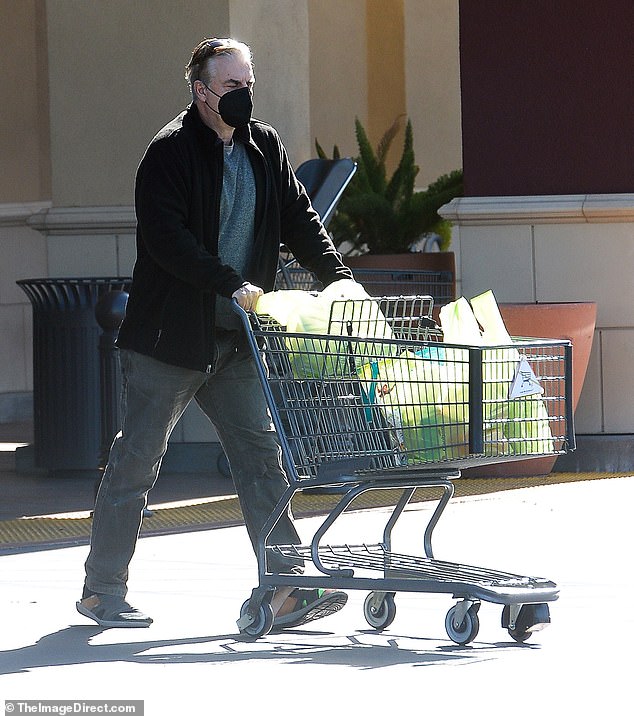 Family man: Chris Noth was pictured stepping out for groceries in LA on Wednesday after reuniting with his wife Tara the day before

The 67-year-old actor dressed down in a grey sweater and khaki slacks for the meeting with his family, which included his two sons, Orion, 14 and Keats, one.

While Chris was seen wearing his wedding ring, Tara, 39, went without hers as she attempted to resume some semblance of normalcy following the scandal currently plaguing her husband.

Tara appeared to be in relatively good spirits as she spoke with her husband of nearly 10 years while with their two children. 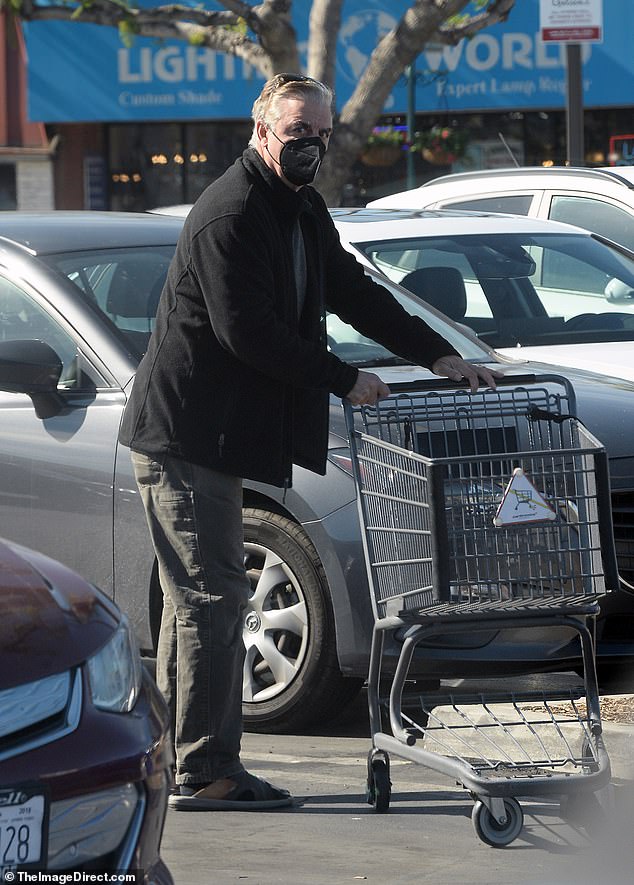 Errands: Noth shops for groceries near his family home in LA after reuniting with wife Tara for the first time since sexual assault allegations by four women

The couple communicated by her white Tesla as Tara packed a few bags in the trunk before Noth saw them off.

The sightings come in the midst of a scandal embroiling the actor which prompted the creative team behind the Sex and the City reboot to edit his cameo out of the finale.

Noth has remained largely out of the public eye following a December expose from The Hollywood Reporter which published allegations of sexual assault against the star from two women who used the pseudonyms Zoe, now 40, and Lily, now 31.

In the report, both accusers claim that Noth had sex with them from behind in front of a mirror, with the first attack allegedly taking place in 2004, while the second reportedly occurred in 2015, three years after Noth married his wife. 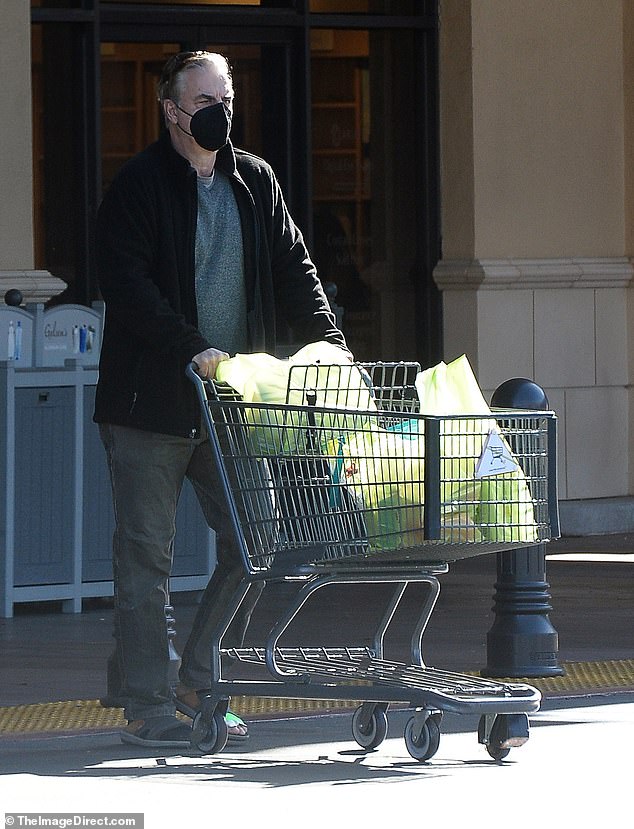 Noth has vehemently denied all allegations of sexual assault, but he’s admitted to having ‘consensual encounters’ with both of his accusers.

The Los Angeles Police Department is not investigating Noth ‘at this point’ on claims that he raped a woman in his LA apartment in 2004, after she and a second accuser came forward with allegations of sexual assault against the actor.

Deadline had previously reported that the actor was indeed under investigation, citing LAPD sergeant Bruce Borihanh as saying, ‘We are still looking into the nature of the report and trying to narrow down where, when and if where the report was filed.’

His ‘recently retained’ lawyer Andrew Brettler told Deadline that the actor has not yet been contacted by law enforcement, but that he plans to ‘cooperate fully … if anyone does reach out.’

Both women said that the recent publicity surrounding the Sex and the City reboot ‘stirred painful memories’ of their encounters with Noth and ‘triggered’ them to go public with their claims.

Just prior to Christmas, a fourth woman, Lisa Gentile, came forward with allegations, saying that Noth had forcibly groped her. 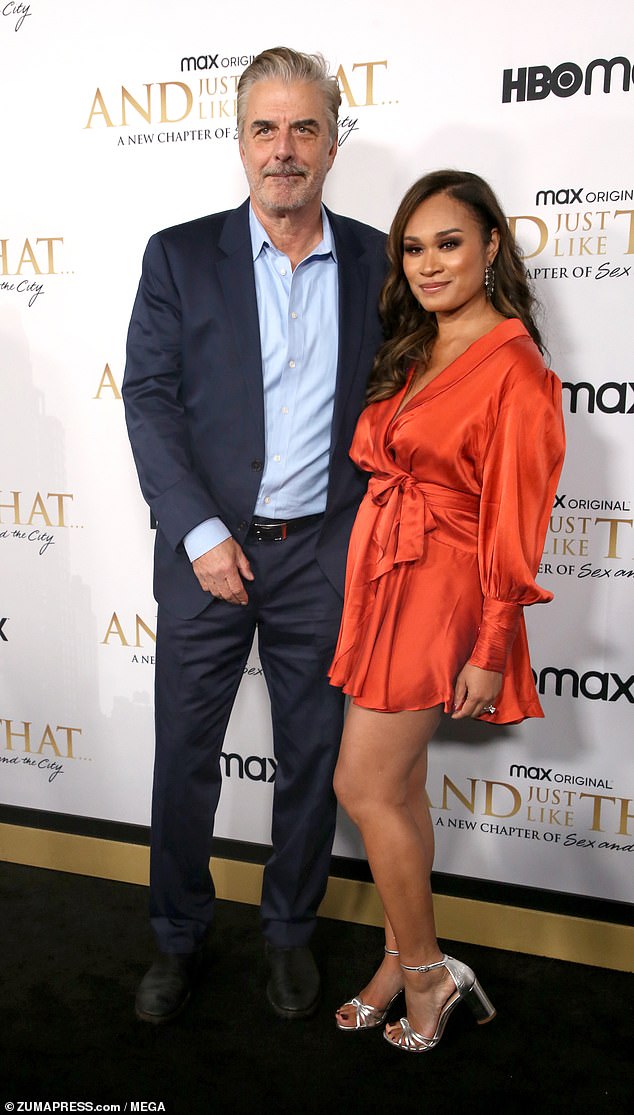 One of the other women claimed the actor groped her when she was working as a hostess and lounge singer at the Midtown Manhattan restaurant Da Marino in 2010. She was 18 at the time and Noth was 55.

She claimed he was constantly drunk at the restaurant and repeatedly pulled her onto his lap while groping her and ‘pressing me onto his erection.’

In a statement to The Hollywood Reporter, Noth admitted that he had ‘consensual encounters’ with the two women, but he strongly denied any accusations that he assaulted them.

‘The accusations against me made by individuals I met years, even decades, ago are categorically false,’ the statement reads.

‘These stories could’ve been from 30 years ago or 30 days ago — no always means no — that is a line I did not cross. The encounters were consensual. It’s difficult not to question the timing of these stories coming out. I don’t know for certain why they are surfacing now, but I do know this: I did not assault these women.’

In addition to having the And Just Like That… scene scrapped in the wake of the allegations, Noth was fired from the CBS series The Equalizer.