No one ever would ever accuse Chris Pine, 41, of resting on his laurels over the course of the last couple of years.

The Wonder Woman star has already had two new films drop in the first quarter of the year, and three more expected to premiere by 2023. And that’s on top of him making his directorial debut in the comedy-mystery film Poolman, which he began shooting in June, and also serves as the leading man.

Over the weekend, Pine took advantage of a bit of downtime from the production and headed out on a retail therapy session with a couple of friends in Los Angeles. 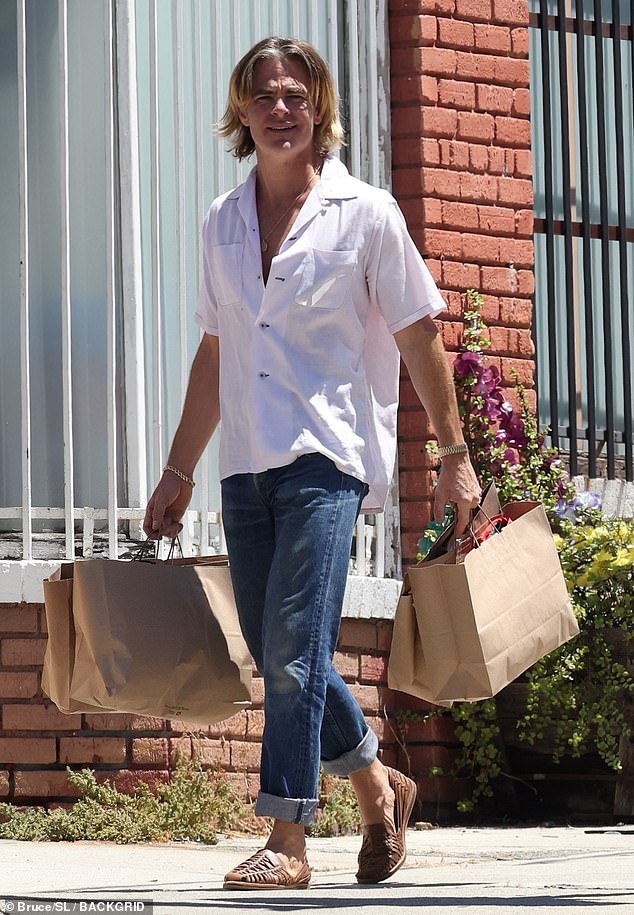 Shop until you drop: Chris Pine, 41, was the picture of casual–cool when he headed out on a retail therapy session with a couple of friends in Los Angeles on Saturday

And from the looks of a couple of photos, Pine’s shopping spree was nothing short of a massive success.

Oozing casual–cool in the fashion department with blue jeans and a white button-down shirt, the actor was spotted making his way from a store to his parked vehicle carrying two shopping bags in each hand.

Pine sported longer hair than normal that had been dyed blonde while his pals walked on each side of him carrying two more of his shopping bags each.

For an added touch of style, the Los Angeles native rolled up the bottom portion of his jeans a few inches, which put an emphasis on his brown leather sandals. 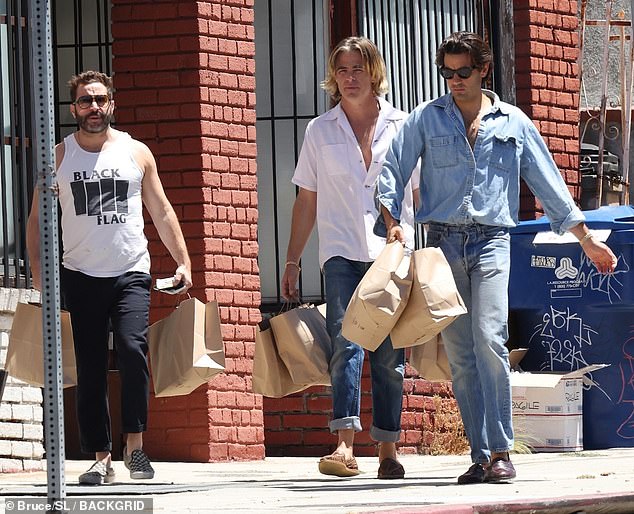 His handsome Southern California look contrasted to his role as Darren Barrenman in Poolman.

When spotted on the set in LA’s Chinatown neighborhood nearly a month ago, Pine had a bushy gray beard and long blonde hair.

For the scene of the day, the costume department dressed him up in a striped shirt that was tucked into gray pleated pants, both of which were contrasted with a set of white shoes.

The performer accessorized with a set of sunglasses, a beige hat and a red bandana that was worn around his neck for the duration of his time on set shooting alongside co-star Danny DeVito.

Drastic looks: The Los Angeles native changed up his look for his new film, Poolside, which he makes his directorial debut while also serving as the leading man

The story follows ‘a man tending to a swimming pool who uncovers a sizeable water heist,’ one in the same vein as Roman Polanski’s neo-noir mystery drama film Chinatown (1974), that starred Jack Nicolson and Faye Dunaway.

‘Because I’d been thinking about it for so f***ing long, it just seemed like a thing that I would be directing,’ Pine told Deadline of his decision to direct Poolman, which came about while out to dinner with director Patty Jenkins and her husband.

PIne’s other films set to premiere by 2023 include the comedy Doula, the psychological-thriller Don’t Worry Darling and the action–adventure comedy Dungeons & Dragons: Honor Among Thieves.