Chrishell Stause is making it clear that there will be embarrassing consequences for anyone who posts nude photos in her DMs without her consent.

The 40-year-old Selling Sunset star complained in her Instagram Stories on Wednesday that she had recently received an unsolicited photo of a man’s penis.

In order to teach him a lesson, she said she passed the photo on to his mother’s account. 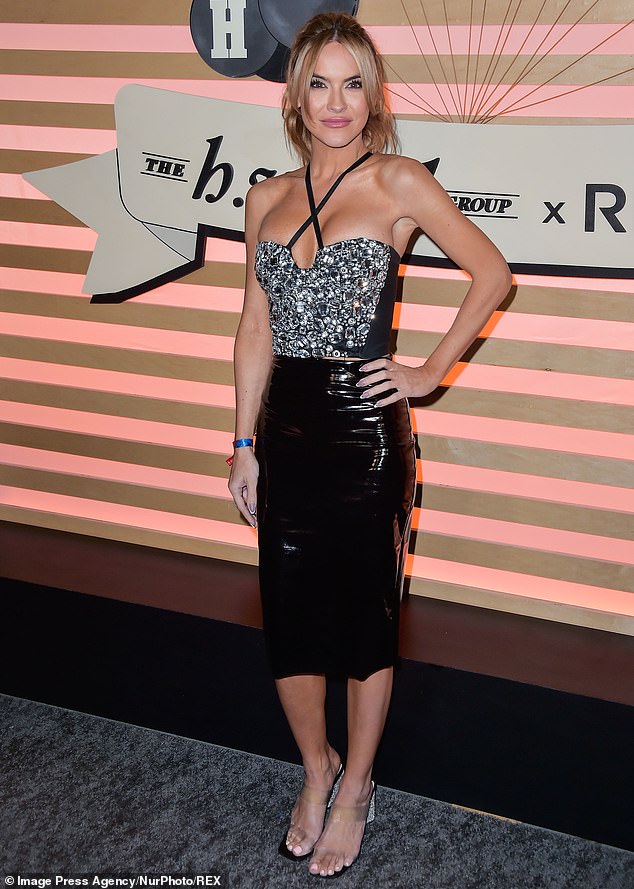 That’ll teach him! Chrishell Stause, 40, said Wednesday on Instagram that taught a man who sent her an unsolicited nude photo a lesson by passing the picture on to his mother; seen in February in West Hollywood

In a text post, Chrishell offered up advice for anyone planning to message her.

‘PSA: I don’t love opening DM’s to unsolicited [eggplant emoji] pics (NO ONE DOES),’ she vented after getting an unwelcome surprise in her inbox.

‘So I sent it to a guys mom today,’ she continued, adding that she ‘respectfully used [the poop emoji] to cover some for her sake’ so as not to be replicating the issue.

To make matters worse, she claimed the man had been serenading online just before he harassed her. 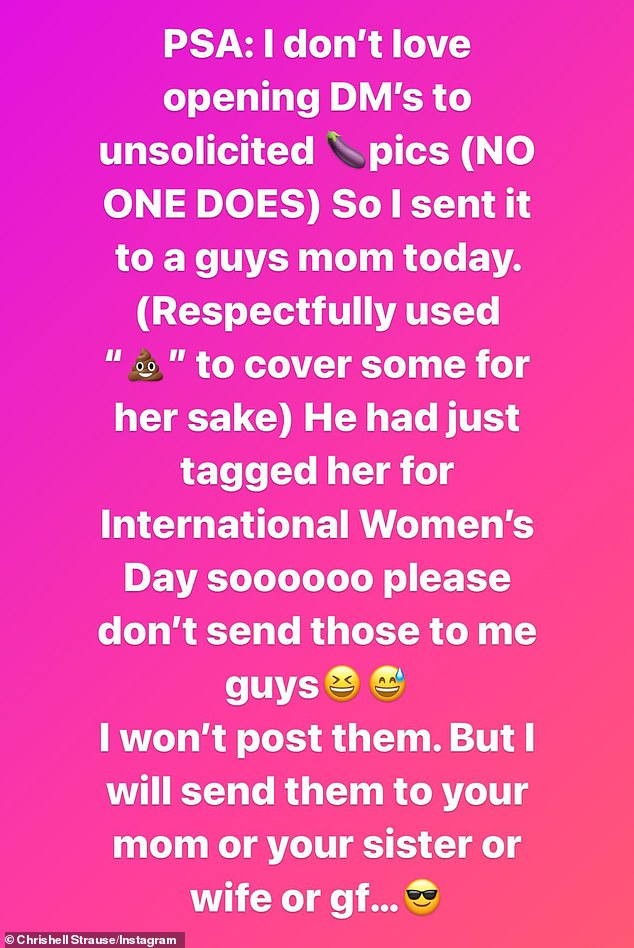 Didn’t think that through: She was astounded that the man had tagged his mother for International Women’s Day before his rude display, but that made it easier to forward the dirty photo 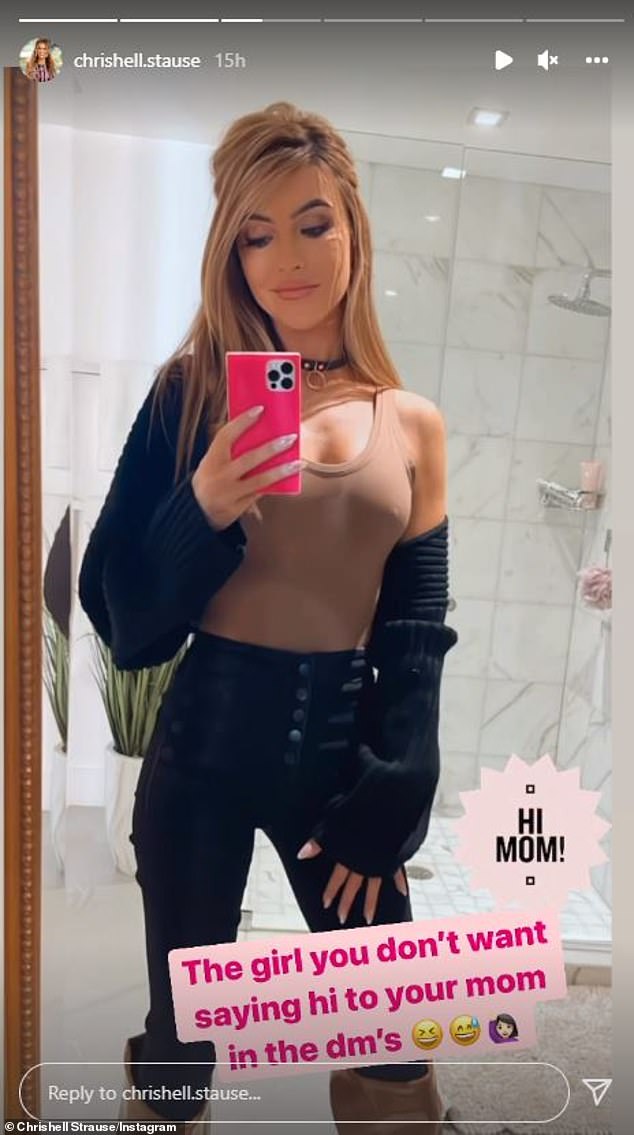 ‘Hi mom!’: She followed it up with a steamy mirror selfie while writing that she was ‘The girl you don’t want saying hi to your mom in the dm’s’

‘He had just tagged her for International Women’s Day soooooo please don’t send those to me guys,’ she wrote.

Chrishell clarified that she wasn’t going to share the rude photos on online or try to publicly shame the offenders, but she wasn’t opposed to more private shaming.

‘I won’t post them. But I will send them to your mom or your sister or wife or gf…’ she concluded, before adding a playful sunglasses-wearing emoji.

The reality star followed up her post with a sizzling mirror selfie in which she went bra-free in a brown tank top, which she wore with a black sweater shrug top and high-waisted jeans, along with brown boots.

‘The girl you don’t want saying hi to your mom in the dm’s,’ she joked while adding, ‘Hi mom!’ 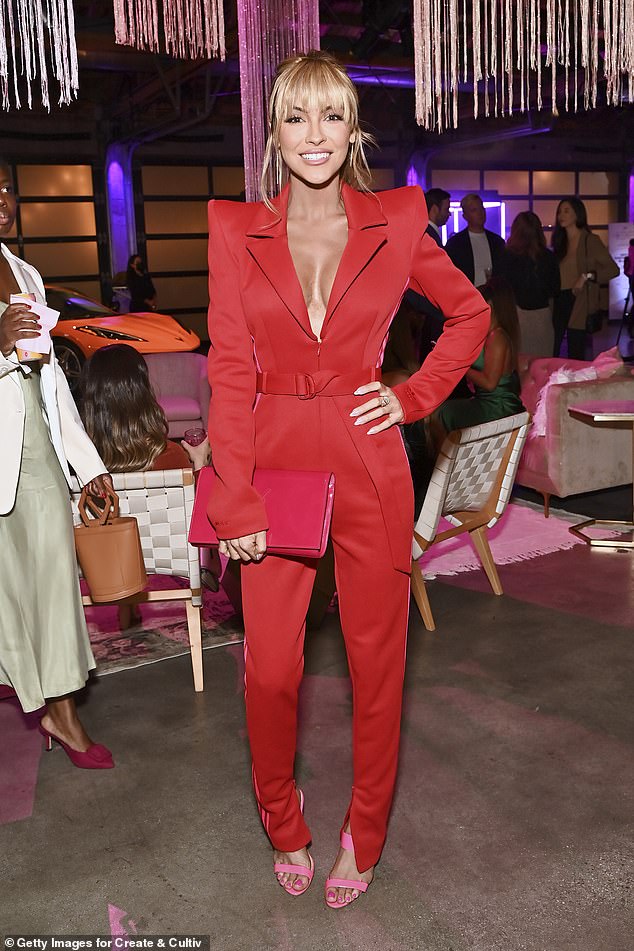 Revenge: Chrishell said she wasn’t going to share the rude photos on online or try to publicly shame the offenders, but she would send it to the women in their lives; seen March 2 in LA

Chrishell seems to be having a rough time dating in the wake of her split from her Selling Sunset costar — and boss — Jason Oppenheim in December.

The two had dated for five months before calling it quits late last year, and the real estate agent to TMZ in January that she was looking to next date someone who wasn’t famous.

‘I definitely would prefer not to [date someone famous],’ she said. ‘It is a little hard, because living in this world, that ends up being the people that you meet.’

She added that the first thing she asks when a friend tries to set her up on a date is if the man is in the entertainment industry.

Chrishell added that, after a transitional period, she and Jason were doing well and were still good friends. 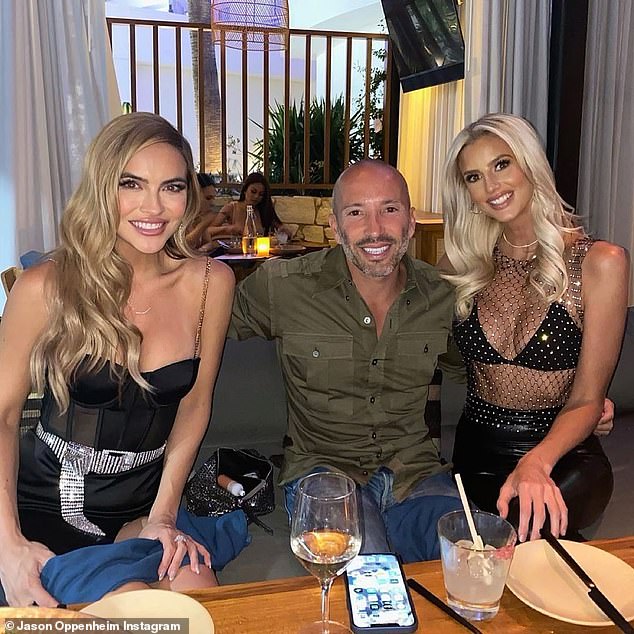 Bumpy road: The Selling Sunset star seems to be having a tough time of dating after she split from her boyfriend — and boss — Jason Oppenheim (center) in December, after five months of dating

The real estate agent said last month on Watch What Happens Live that things are only ‘awkward’ between her and Jason if ‘alcohol is involved.’

She also joked that she was trying to get a higher commission rate at the Oppenheim Group due to the publicity she attracted with the relationship.

Chrishell previously had a negative experience with a celebrity when her marriage to This Is Us star Justin Hartley came to an abrupt end.

The two had dated since 2014 and tied the knot in 2017, but she claimed that he only gave her 45 minutes of notice via text message ahead of news breaking that he had filed for divorce in November of 2019.

She former actress was subsequently linked to Dancing With The Stars pro Keo Motsepe from December 2020 until February of the following year, around the time that her divorce from Hartley was finalized.