Chrissy Teigen shared adorable pictures of her children on Easter to her Instagram page.

The 35-year-old model dressed Luna, six, and Miles, three in their Easter outfits. 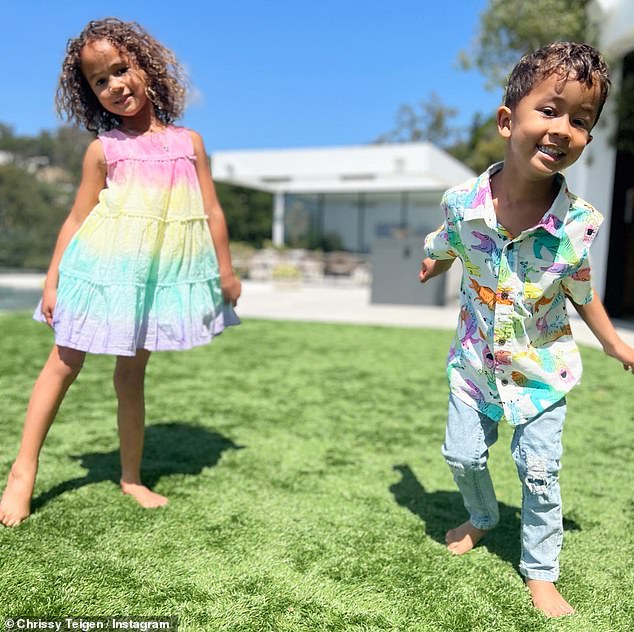 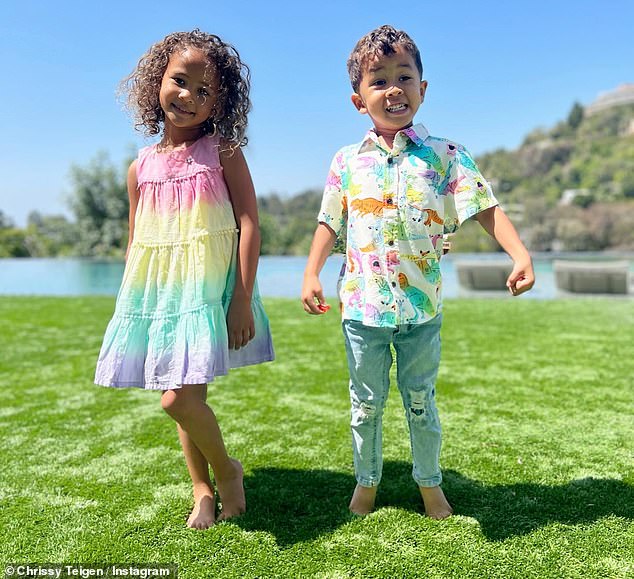 Miles was dressed in a coordinating outfit with distressed blue jeans and a shirt with mutli-colored dinosaurs.

The Jesus Christ Superstar Live In Concert performer posted ‘Easter Sunday’ next to the photo on social media. 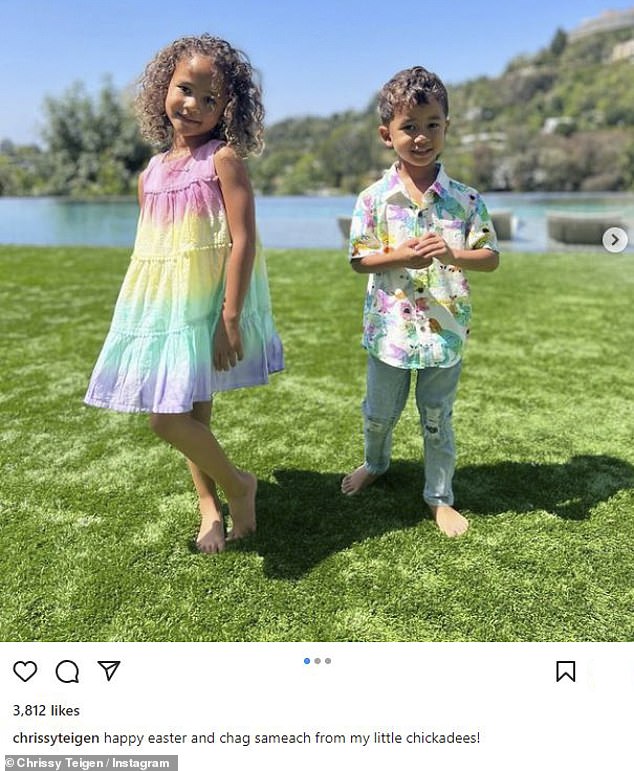 Chrissy sent a message to those of Christian and Jewish faiths writing, happy easter and chag sameach from my little chickadees!’ (sic)

Chag Sameach is Hebrew for Happy Holiday and is often used as a Passover greeting.  The hashtag #chagsameach began trending when the Ukrainian foreign minister used it in a Passover greeting, writing, ‘Happy Passover to all Jewish communities in Ukraine and around the globe celebrating. Life and freedom are Ukraine’s two most important values. Let us all be united in protecting them and bringing peace to Ukraine. Chag Sameach!’ on Twitter.

Passover and Easter fell on the same weekend and Muslims began celebrating Ramadan on April first. It’s the first time in more than 30 years that the three Abrahamic religions have marked these sacred holidays at the same time. 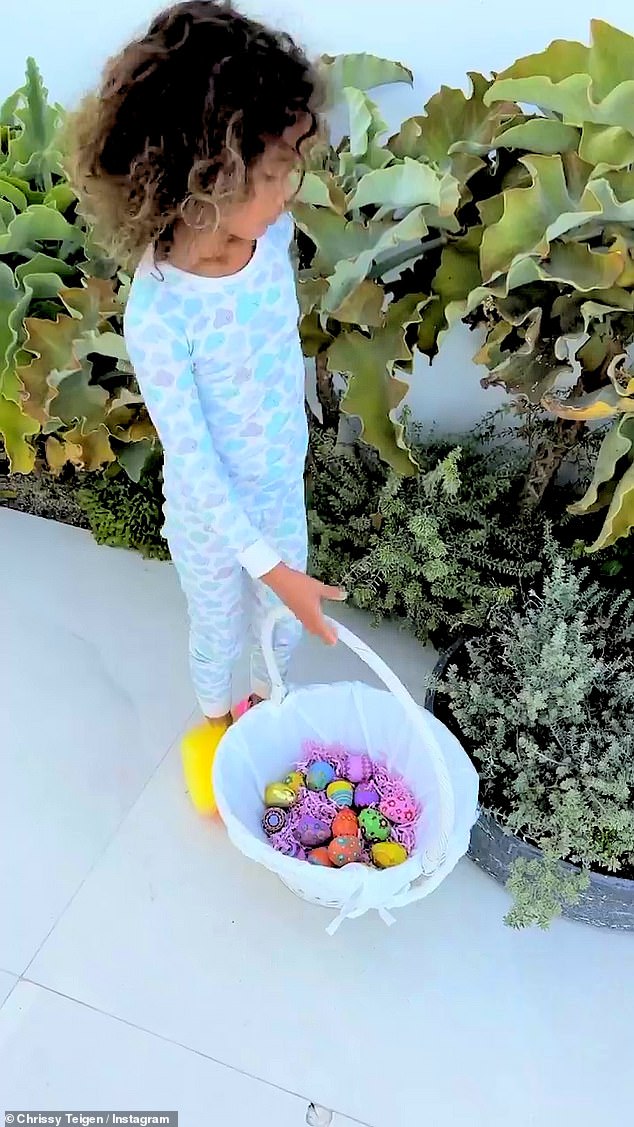 A tisket, a tasket: Six-year-old Luna had lots of luck filling her basket during the family’s traditional egg hunt 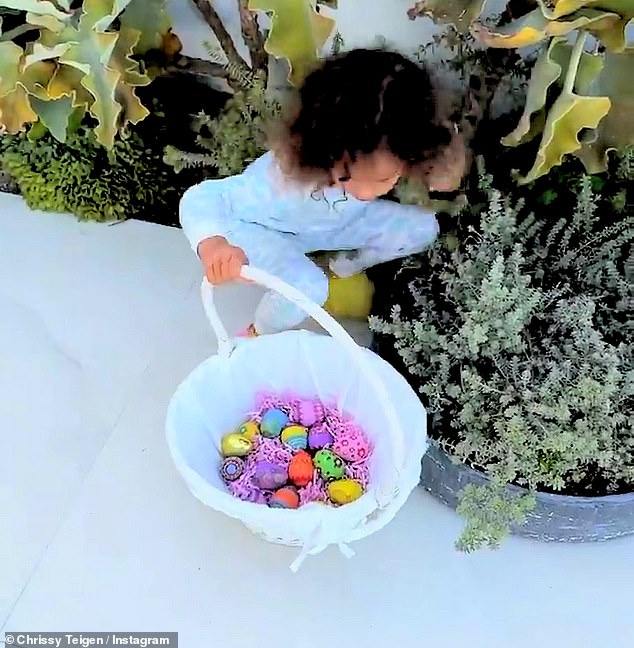 No fear: The kindergartner showed no trepidation in burrowing through the underbrush in search of the brightly decorated eggs

The Legend kids seemed to have fun marking their holiday with a traditional Easter egg hunt.

Young Luna showed no trepidation in burrowing through the underbrush in search of the brightly colored eggs.

Later, they played on a not-so-traditional rock climbing wall. 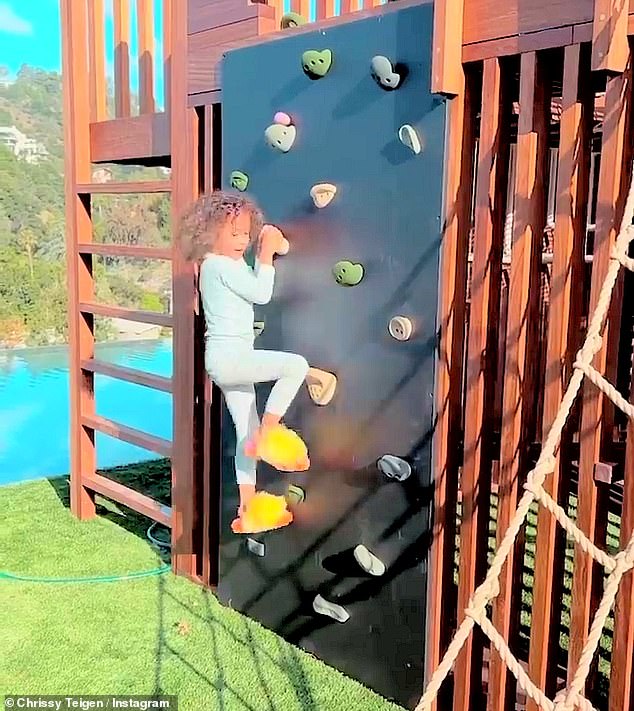 Up the wall:  After the egg hunt, Luna decided to take a turn on the climbing wall, wearing fuzzy yellow slippers instead of sneakers

Instead of sneakers, the kindergartner chose to show her skills wearing a pair of fuzzy yellow slippers.

It’s been a busy time for the family filled with lots of adventures.

They recently returned from a Spring Break vacation to Hawaii, and then a trip to Disneyland to celebrate Luna’s birthday. 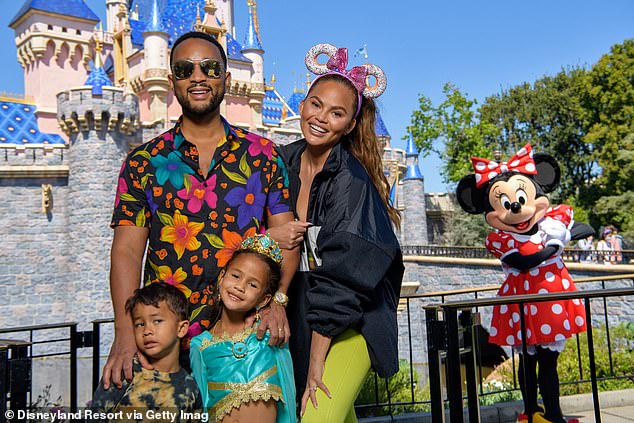 Happiest place on Earth: Chrissy, John and their kids Luna and Miles at Disneyland last week