She has been in the spotlight for over two decades.

But Christina Milian may look better than ever.

The 40-year-old multihyphenate looked absolutely scintillating in a recent photoshoot for PrettyLittleThing posted onto her Instagram account on Tuesday. 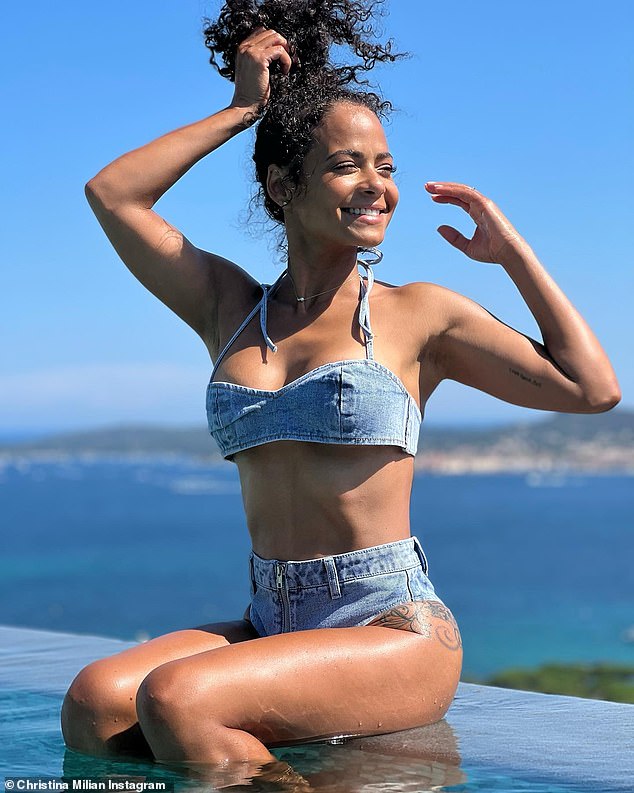 The Love Don’t Cost A Thing star posed while standing at the edge of an infinity pool for the picturesque snaps.

She combed through her curly locks in two of the snaps as she showcased her natural looks with complementary make-up. 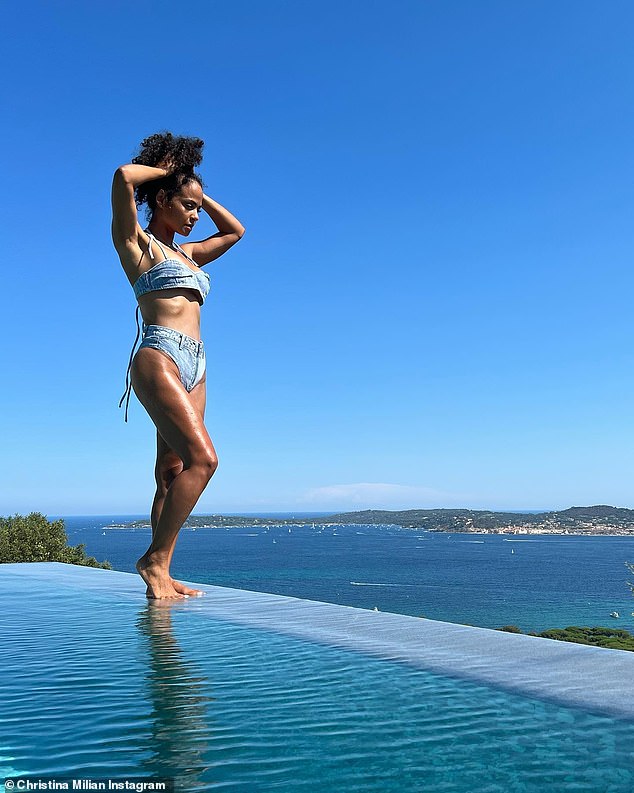 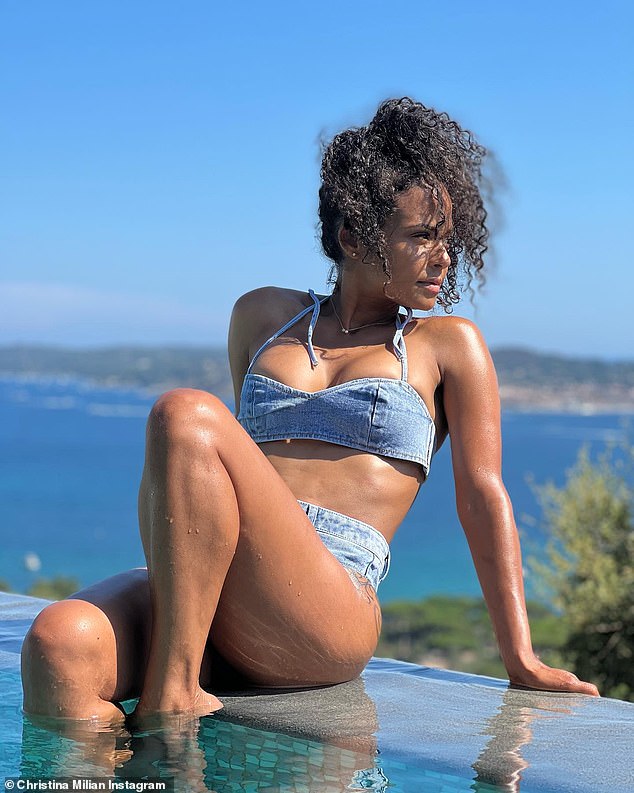 She captioned the gallery of images to her 7.1million followers: ‘Hair blowing’ in the wind [wind emoji] Sun glistening on my skin [sparkle emoji] @prettylittlething’

The stunner has certainly been flexing her promotional muscle for the brand as last month she flaunted her slim waist and fit physique in a photo shoot for PrettyLittleThing also on Instagram.

The singer is a brand ambassador for the popular fast-fashion retailer, and often shows off her stylish looks to help promote the company.

The actress has had role of ambassador with other top retailers over the years, such as Fashion Nova and collaborated with Rihanna’s lingerie brand, Savage X Fenty. 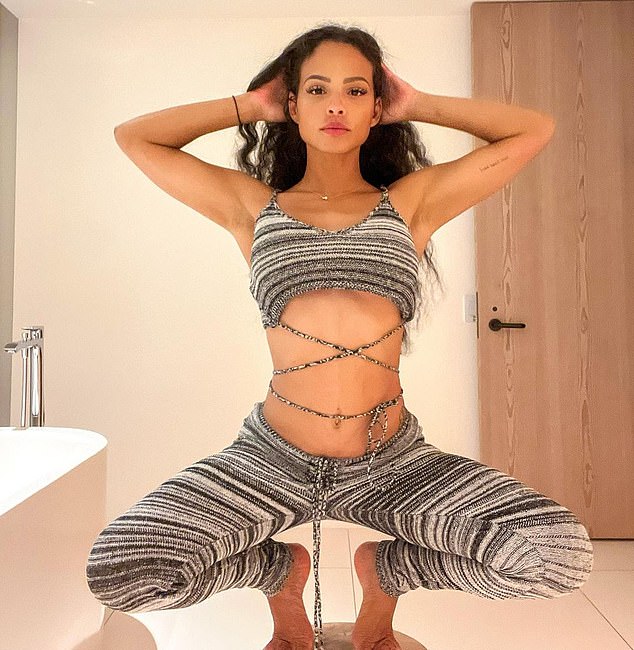 Stunning: The stunner has certainly been flexing her promotional muscle for the brand as last month she flaunted her slim waist and fit physique in a photo shoot for PrettyLittleThing also on Instagram

The mom of three flaunted her toned midriff in a gray and white striped crop top that can be tied down to the waist.

She added a pair of matching leggings that could also be tied and secured at the waist.

As she exuded confidence in the fashionable outfit, the AM To PM singer showed off a few model poses for a mini photo shoot for the brand.

According to the brand’s website, the crop top is currently priced at $10 with the leggings priced around $14.50. 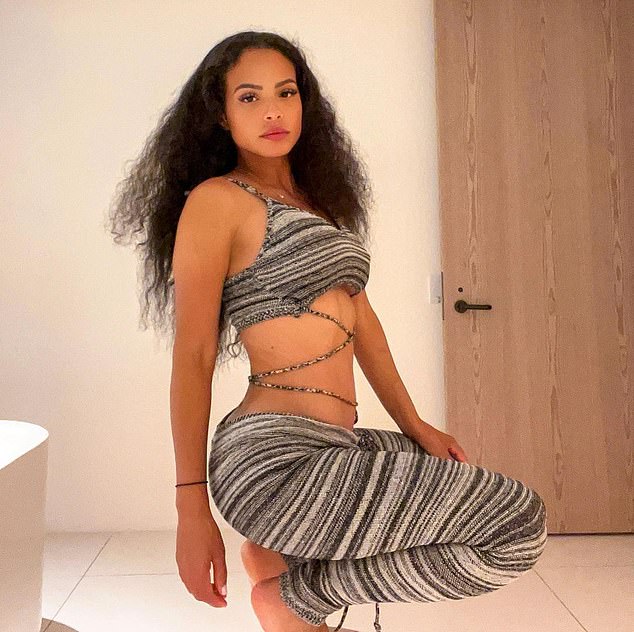 Beautiful: The mom of three posed in an ensemble as brand ambassador for the UK based fashion retailer

The Dip It Low hitmaker kept her hair naturally down, with her long locks falling down past her shoulders.

Her makeup was simple and elegant, with a small amount of mascara applied to her long lashes and a pink-colored tint to her lips.

She opted to not have any heavy eyeliner or eyeshadow to her look, and also kept additional color to her cheeks very minimal.

Christina decided to say very comfortable while she posed on the tiled floor by not wearing any shoes. To not take away from her eye-popping and unique outfit, she only accessorized the look with one dainty necklace. 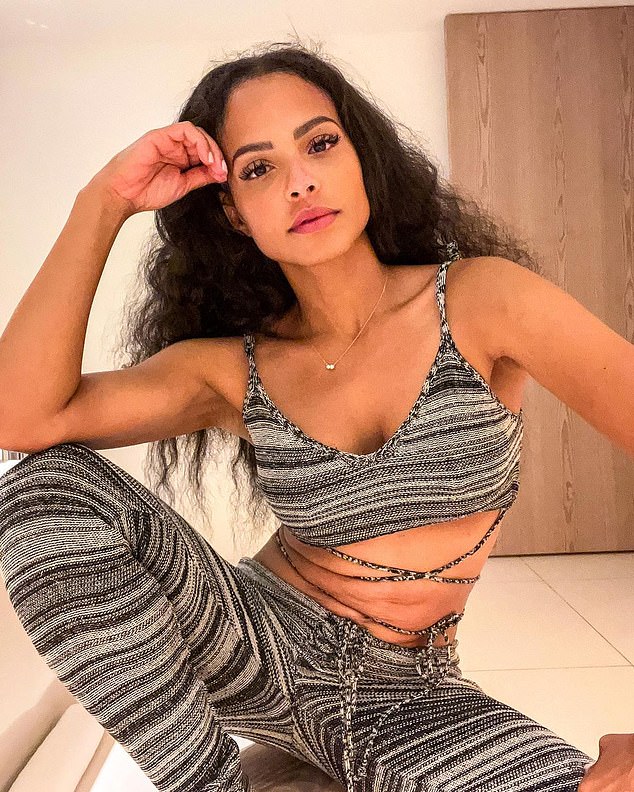 So stylish: The singer and songwriter has also collaborated for Rihanna’s lingerie brand, Savage X Fenty

With her brand ambassador roles and collaborations for various fashion brands, the actress has become a fashion inspiration to her 7.1 million followers on Instagram.

Alongside juggling being a mother and working with brands, the star is also a dedicated businesswoman.

The Love Don’t Cost A Thing actress is co-founder of a café called Beignet Box, with two locations in the Los Angeles area. She opened up the tasty restaurant with her long-time friend, Elizabeth Morris. 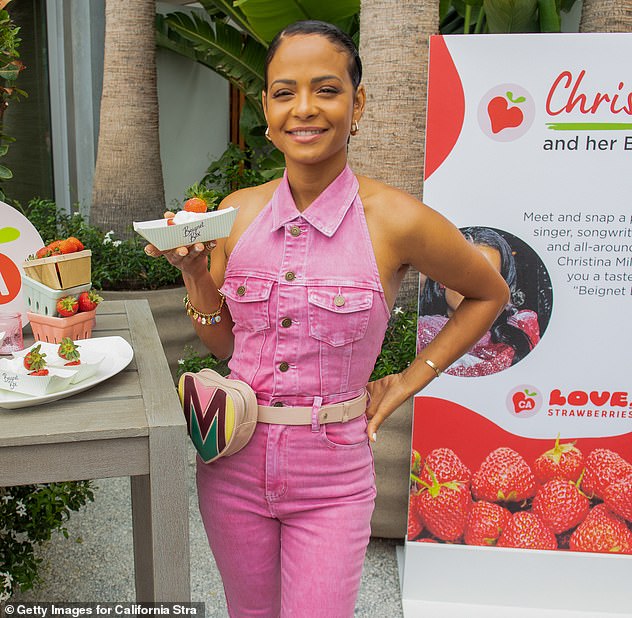 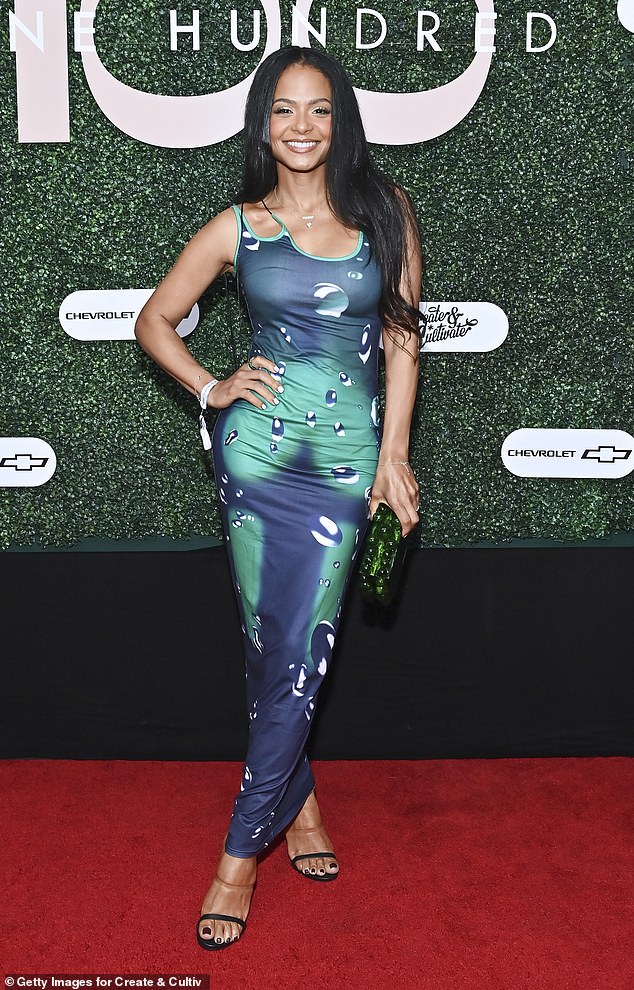 Food lover: The actress and singer also has a passion for yummy treats, and opened her own café which has two locations in Los Angeles

During an interview with Modeliste Magazine, the star discussed being a hard-working businesswoman and the importance of not giving up.

‘Nothing comes easy. It takes a lot of work, time, and patience,’ she explained. ‘Don’t ever be afraid to fail because your failures are lessons learned that make you better. There will be a lot of failure and it’s not personal, you just have to keep trying.’

Although starting her business has been a monumental moment in her life, her biggest passion is acting.

Christina has starred in films such as Falling Inn Love, Love Don’t Cost A Thing, and American Pie.

On the topic of what other goals she has for her successful career, she responded with, ‘One day I would love to write a script and direct a movie. Fingers crossed.’ 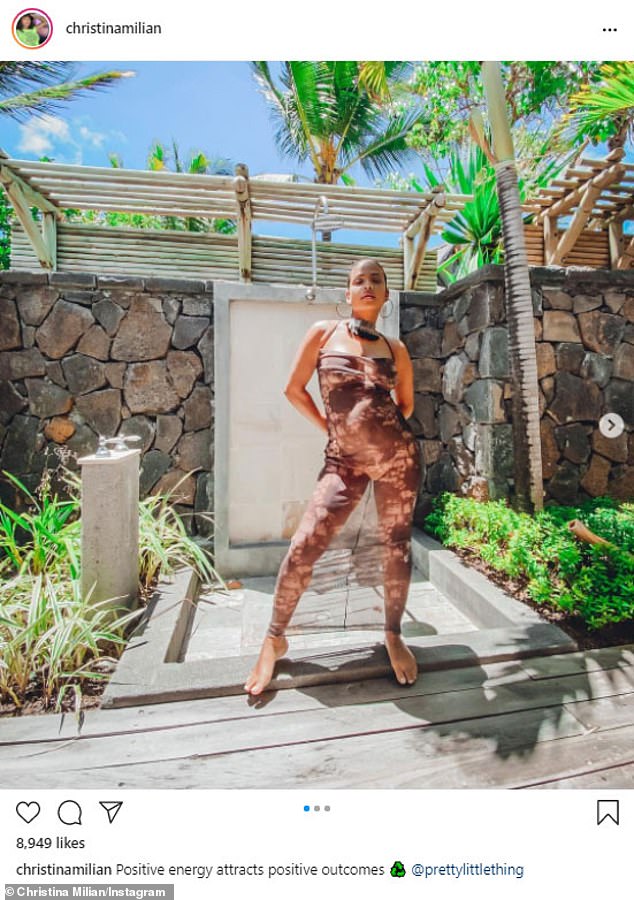 Dedicated: Christina has had the role of brand ambassador for Pretty Little Thing for over a year

When asked about what her biggest inspiration was in her life, the American Pie actress stated simply, ‘My children. Everything I do is for them.’

Christina was formerly married to singer, The Dream from 2009 to 2011. The two share one daughter together, Violet.

After dating after her divorce from the singer for some years, she married French singer, M. Pokura, in 2020. The couple have two children, Isaiah and Kenna. 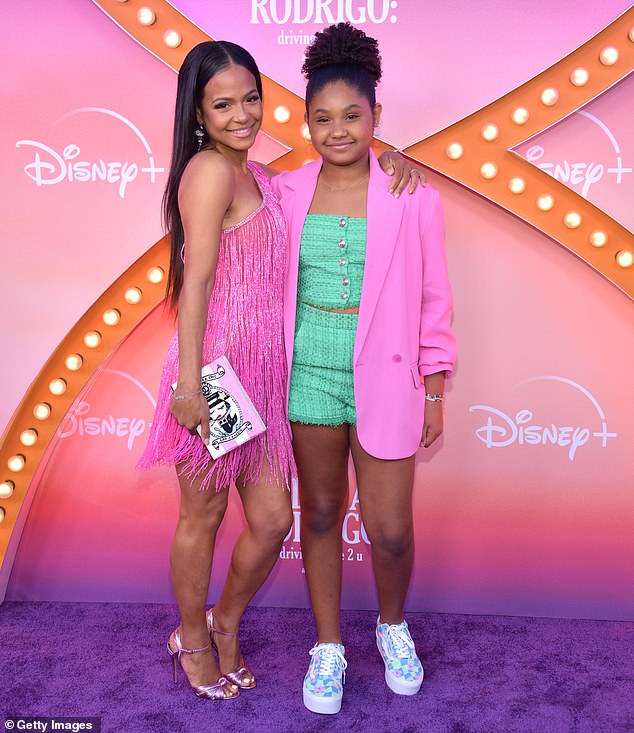 Mother daughter duo: Christina and her daughter she shares with The Dream from her previous marriage, Violet Nash, pose together on the red carpet 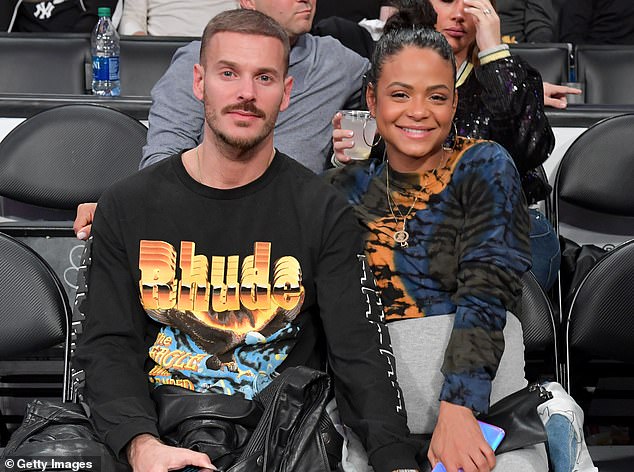