She the proud mother of three children.

And just 16 months after her most recent arrival, son Isiah, the actress and singer took to her Instagram page to show off her banging body as fashion ambassador for Fashion Nova.

For her latest promotional push of new arrivals for the American fashion retail company, Milian strutted her stuff in a skimpy white bikini, while on a family trip to the Italian island of Sardinia. 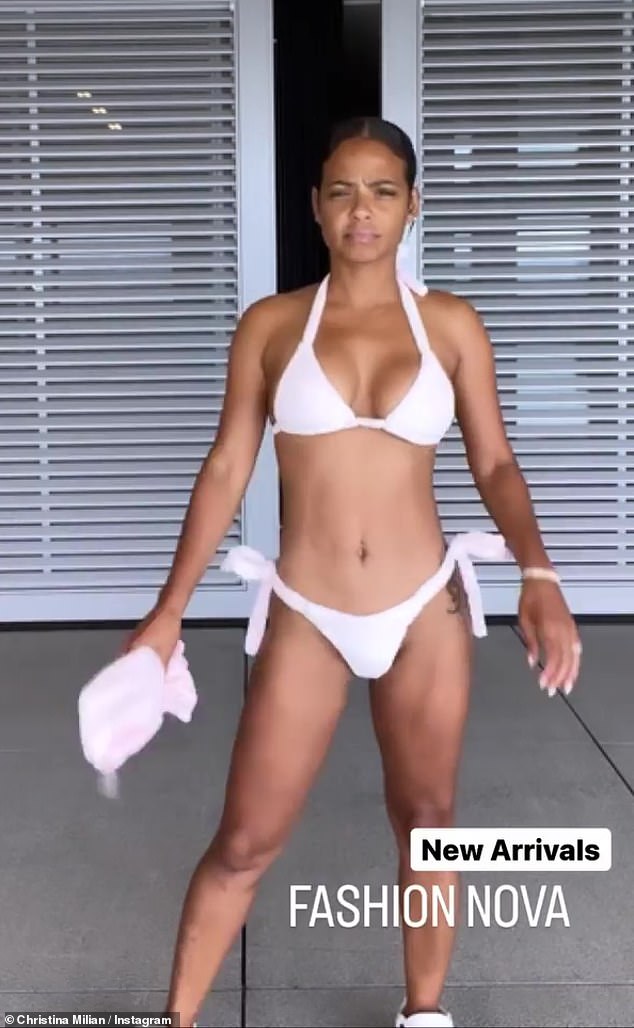 Bangin’: Christina Milian, 40, showed off her fit figure while promoting Fashion Nova during a family trip to the Italian island of Sardinia

Being the well-rounded entertainer that she is, Milian put on a mock catwalk exhibition of sorts for a video, which began with her stepping out from a sliding glass door.

‘Uno Dos Thres 4-5-6-7 @FashionNova #fashionnova #fashionnovapartner #newarrivals,’ the 40-year-old shared in the caption, as a means to create a bit of excitement to her first appearance that showed her stripping out of a small white sarong.

Now dressed in just the two-piece swimsuit from Fashion Nova, the Love Don’t Cost A Thing star proceeded to strike a number of poses both in the beach wrap and just in the bikini. 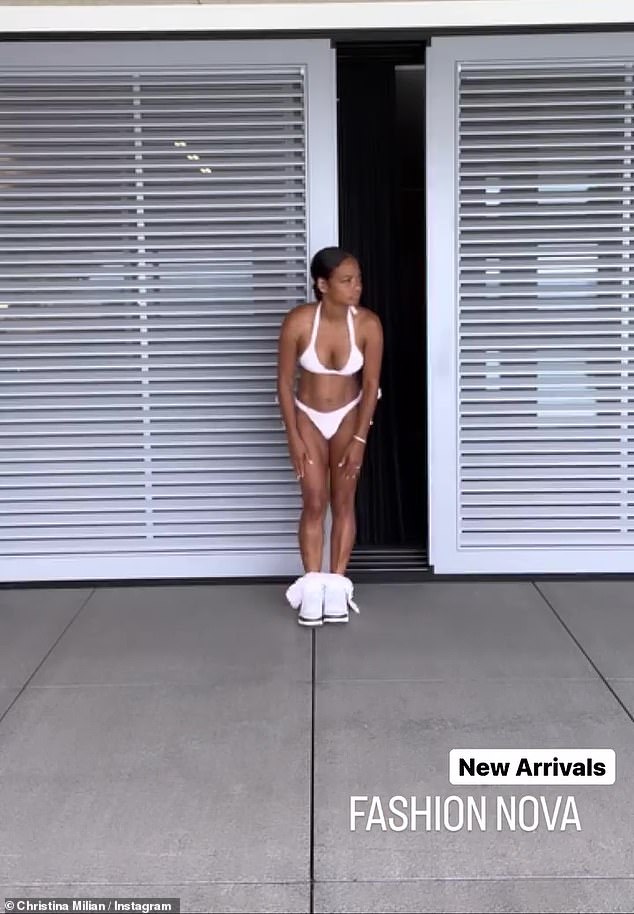 Being the well-rounded entertainer that she is, Milian put on a mock catwalk exhibition of sorts for a video, which began with her stepping out from a sliding glass door

Making an appearance: The entertainer also gave a countdown to her mock catwalk in the caption to create a bit of drama

Working it: Milian first appeared while stripping out of a small white sarong, to showcase the white Fashion Nova bikini, which part of the the fashion retailer’s new arrivals 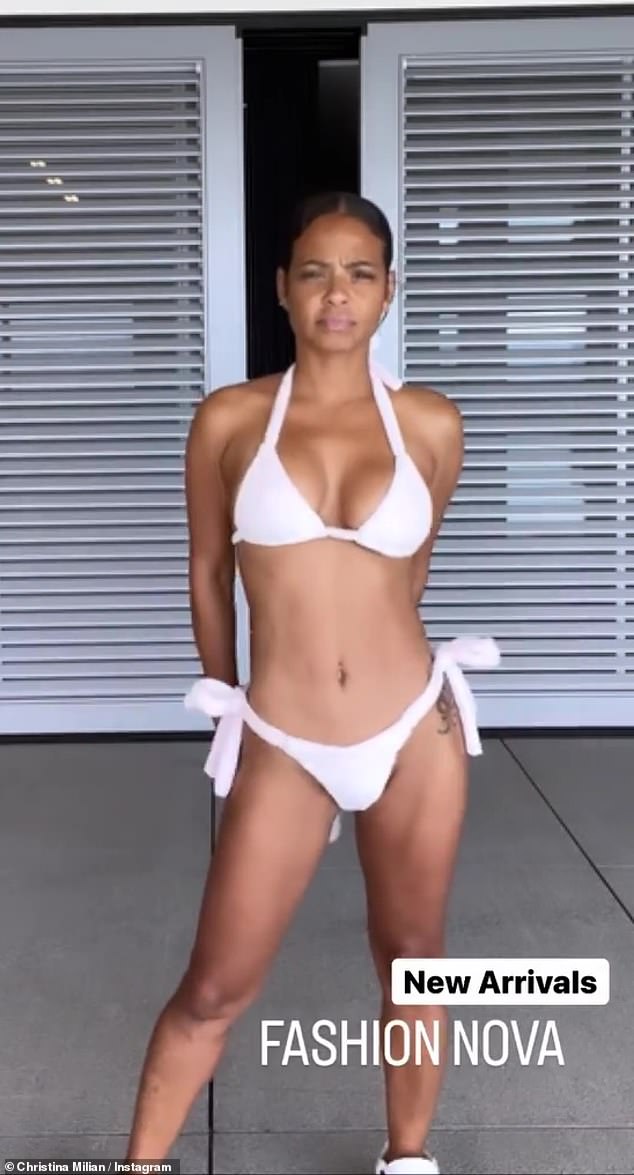 Sizzling: The New Jersey native worked the camera while strutting her stuff in the two-piece

And in keeping with the casual beach vibe, she also donned a pair of matching white sneakers for the clip.

It ends with her striking a pose while kneeling down on one knee as she flashed a seductive stare, and another with her arms raised up over her head to reveal her tattoo on her hip. 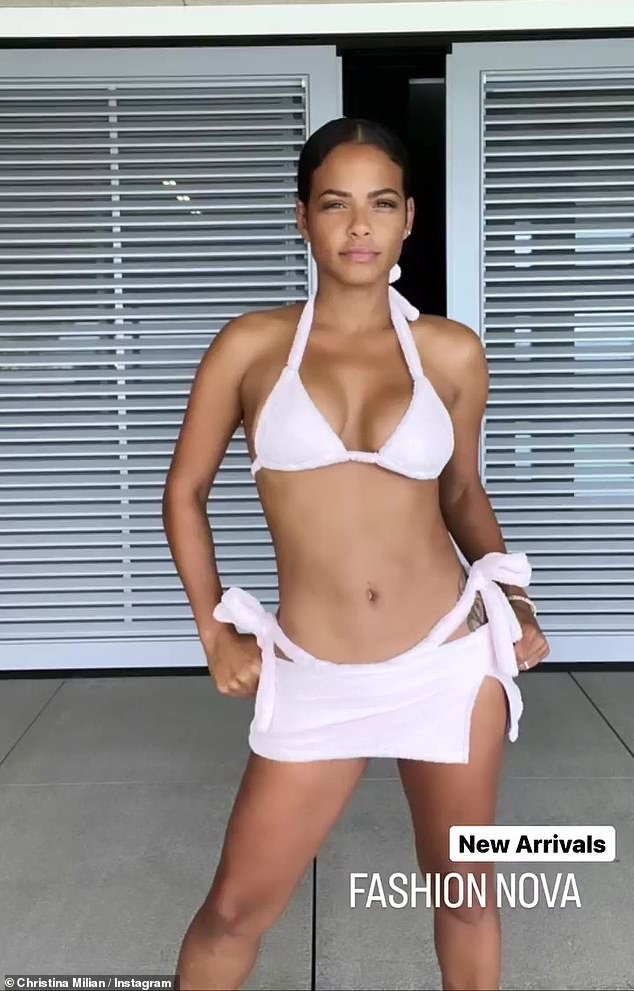 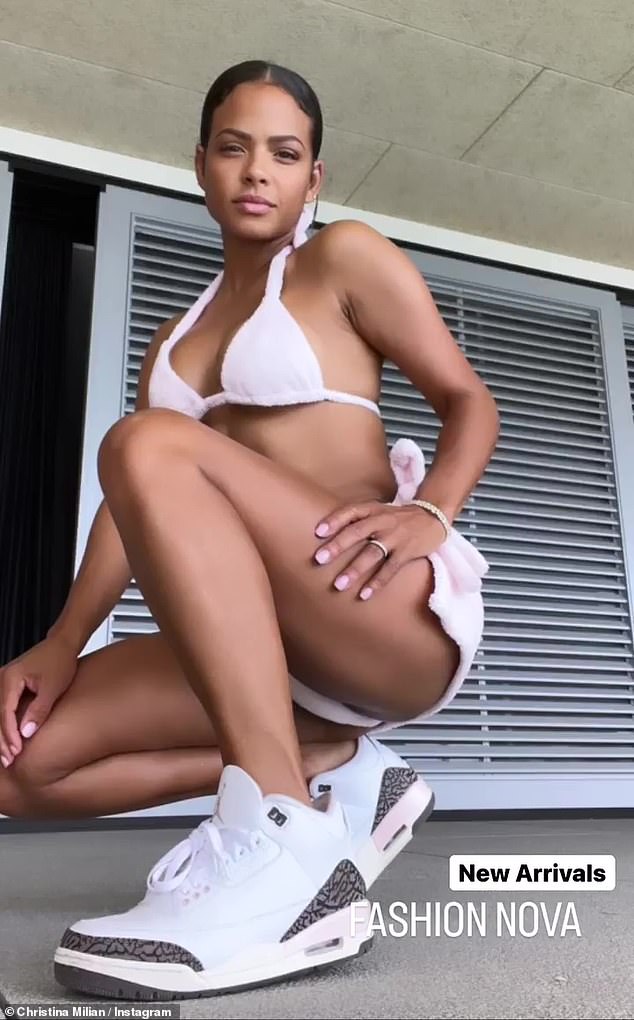 Lovely: The TV personality wrapped up the video with a couple moves, including a kneel down as she stared seductively into the camera 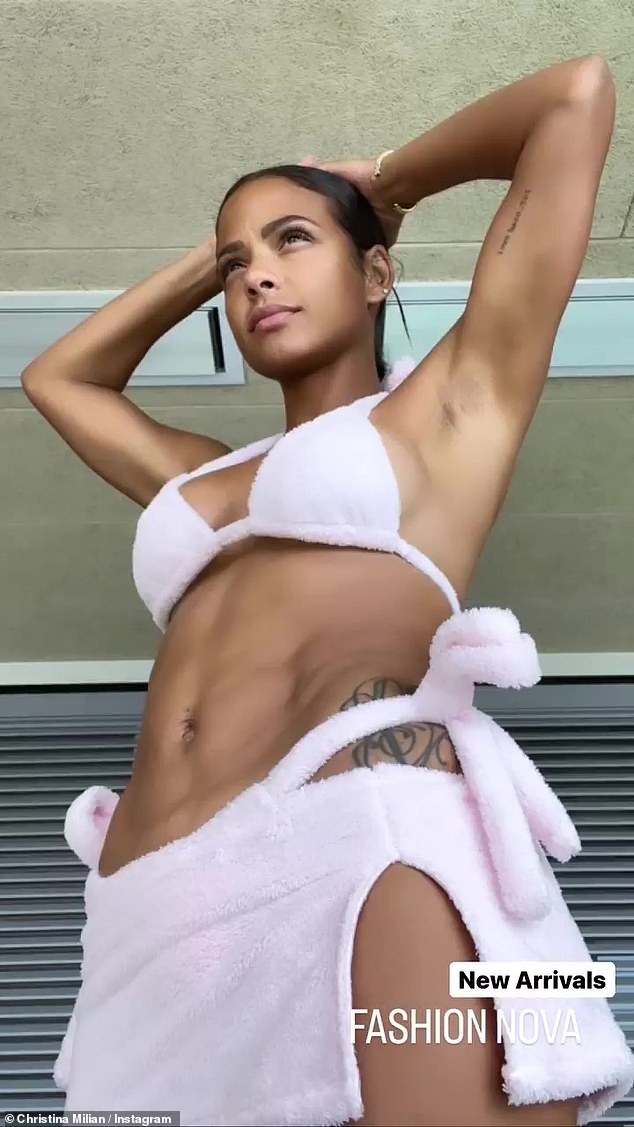 Toned body ink: Milian ended the clip by lifting her arms above her head, which highlighted her toned midriff and tattoo on her hip

One day earlier, Milian took to Instagram and posted a photo of herself and husband Matt Pokora enjoying a couple of gelato cones

Double scoop for me,’ she gushed in the picture that showed the couple snuggled up together.

She also took a couples photo with their friends later in the evening while still on the Italian island on Wednesday. 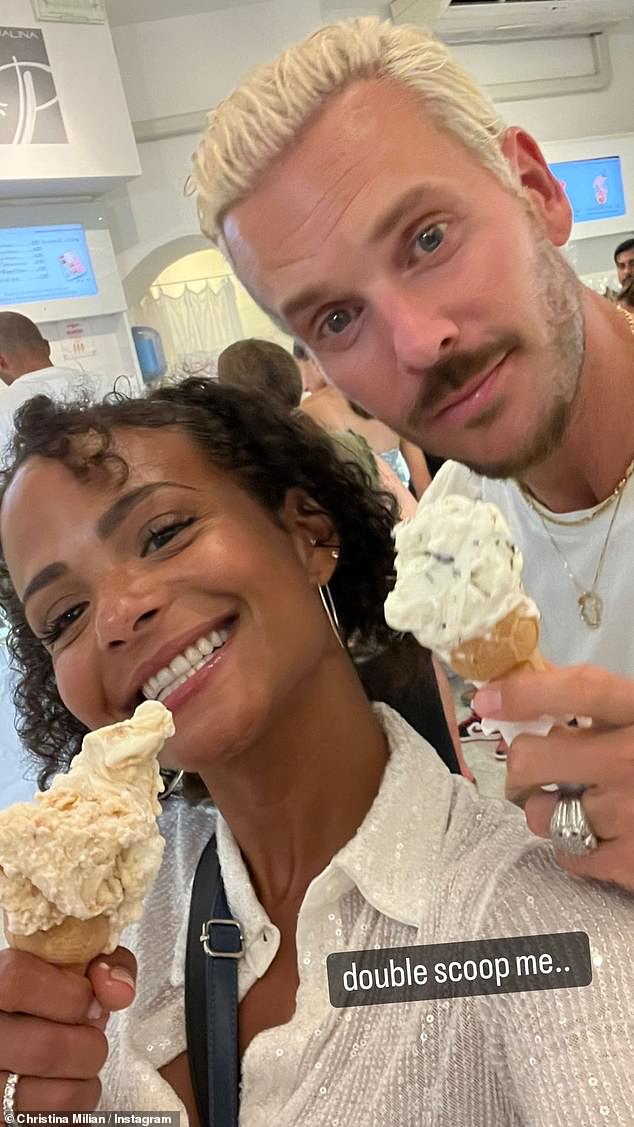 Italian sweet treat: Milian also got to enjoy a bot of gelato with husband Matt Pokora 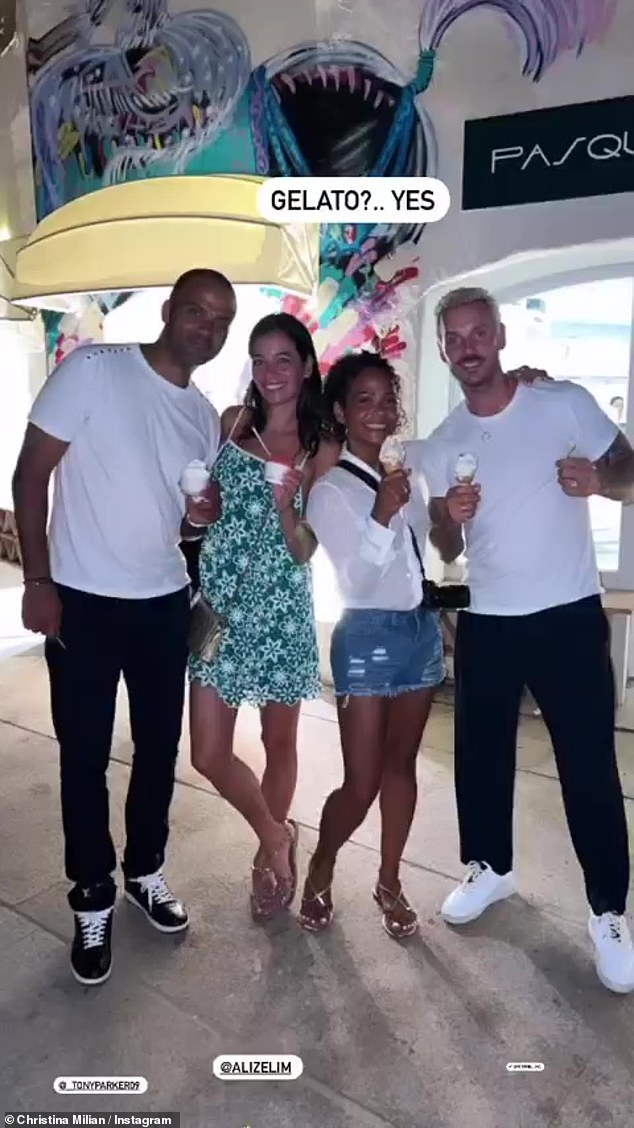 Summer lovin’: The couple also spend time with friends on the Italian island

The New Jersey native also shared some images of herself and Pokora with two-year-old Isiah and their one year-old daughter Keena.

Milian is also the proud mama to her 12-year-old daughter Violet, whom she shares with ex-husband Terius Youngdell Nash, otherwise known by his stage name of The-Dream. But it’s not clear whether she made the trip or stayed back home with her father.

The television personality, who keeps in shape by running on the treadmill every day, has also been using her social media influencing powers as ambassador to the UK-based clothing line PrettyLittleThing while on holiday in the tropical paradise. 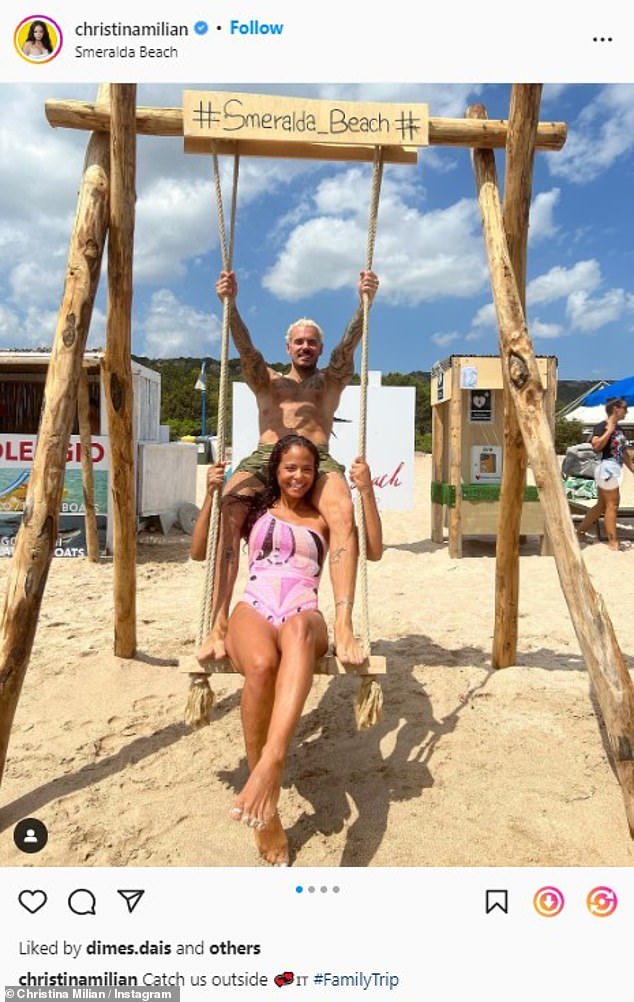 Lovin’ it: The couple, who have been married since December 2020, also gave Milian’s 7.1 million Instagram fans and followers a glimpse of their time on Smeralda Beach in Italy 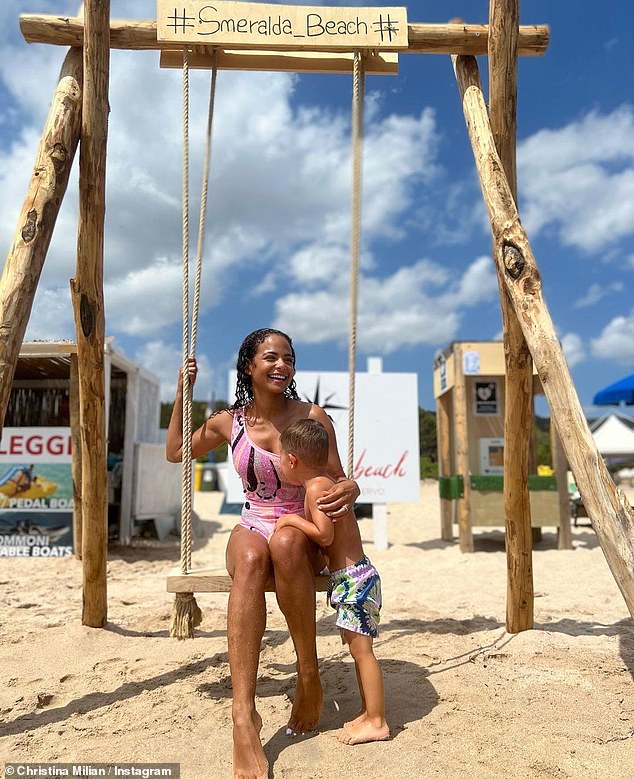 Family trip: The proud mom also shared a photo of herself with her two-year-old son Isiah 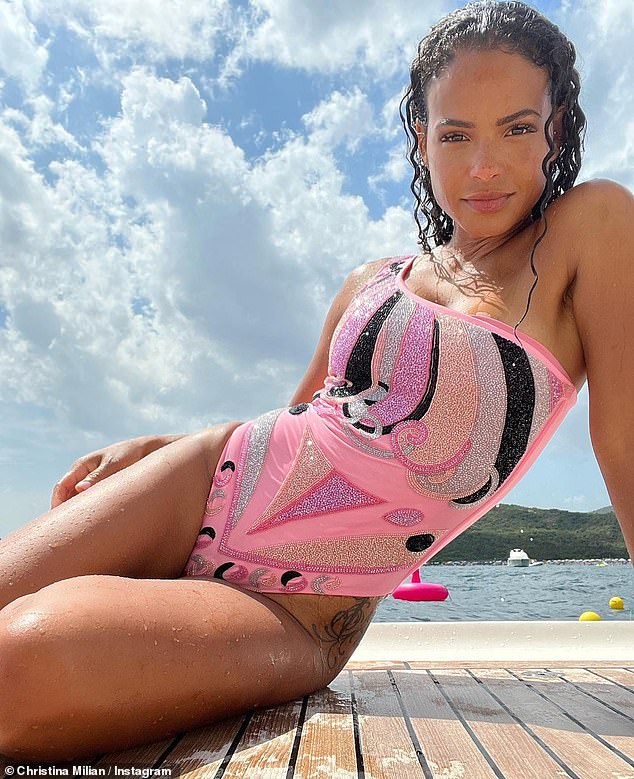 Beach time: The mother of three also showed off her fab figure in a one-piece swimsuit 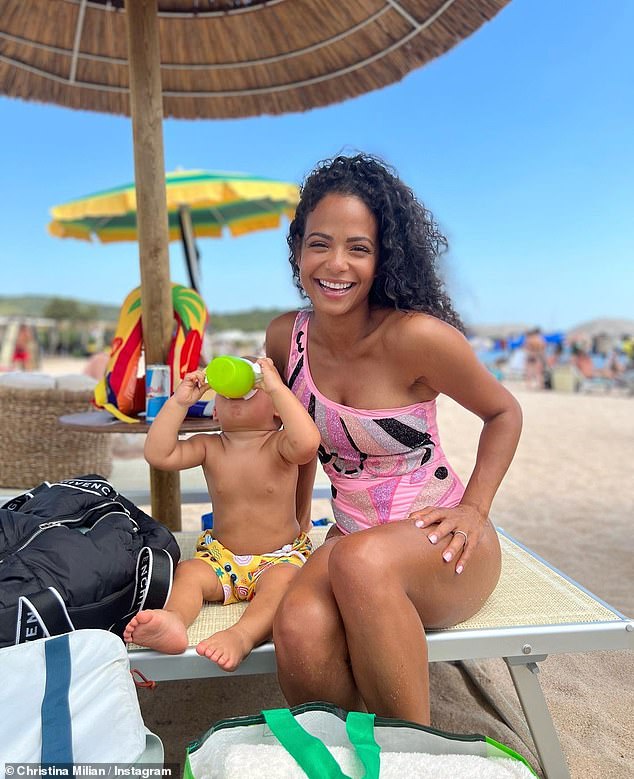 Family time: Milian was all smiles when she struck a pose with one-year-old daughter Keena