Politicians and charities are warning of a debt time bomb as consumers turn to buy now, pay later (BNPL) to fund Christmas shopping.

BNPL allows customers to split the cost of purchases into instalments. It is particularly popular with younger shoppers and in sectors such as clothing and fast fashion.

It boomed during the pandemic amid a surge in online shopping, leading to the growth of firms including Swedish group Klarna, Silicon Valley-based Stripe and British outfit Zilch. 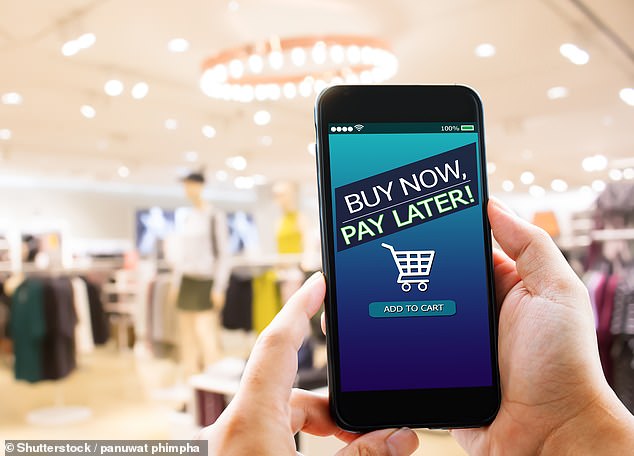 Tech giants Apple and Paypal also launched BNPL services. But the sector has come under pressure as the cost of living hits spending and demand.

This week, Klarna – once Europe’s most valuable tech firm – saw losses more than double to £652m in the third quarter, while last month Stripe announced it was cutting around 1,000 jobs, 14 per cent of its workforce.

The industry also faces regulation following criticism that it allows people to unknowingly build up debts they cannot repay. Sue Anderson, head of media at debt charity StepChange, said 27 per cent of people who used credit last Christmas opted for BNPL, but this could rise in 2022.

‘More could turn to BNPL to afford Christmas, leaving consumers more vulnerable to the risk of problem debt,’ she said. ‘BNPL options are becoming increasingly common at checkouts and are often presented as a convenient way to pay.

‘While BNPL is usually interest-free, it’s important to remember that it’s still a form of credit, and the consequences of missing a payment can be just as serious as with any other credit product.’

StepChange’s head of external affairs Richard Lane said people often did not recognise that they had taken out credit or debt. Unlike other forms of lending, BNPL is unregulated – but is facing a crackdown as fears of a debt crisis mount.

Tory MP Paul Maynard said it needed to be ‘properly regulated’. He added that while this Christmas was expensive for shoppers ‘more so than ever’, they should consider options such as credit unions.

‘It may not look like it, but [BNPL] is a form of credit, and people need to be careful,’ Maynard said.

Labour MP Stella Creasy called on the Government to confront ‘legal loan sharks’, saying the cost of living was ‘dragging millions into a cycle of toxic personal debt’.

She has tabled an amendment to the Financial Services and Markets Bill, due to be voted on next week, which would require regulations on BNPL to be published by the Government within 28 days of it becoming law. ‘MPs can step in where ministers have failed and vote to compel the Government to act,’ she said.