A fourth person, named only as a ‘City of Hope patient, has been cured of HIV using a highly dangerous stem cell treatment reserved only for patients who are also battling leukemia.

The unnamed 66 year old man was treated in the City of Hope National Medical Center in Duarte, California, earning him his nickname. He received a blood stem cell transplant in early 2019 and has not shown any evidence of HIV replication in his body since. He has now been off of HIV medication for 17 months.

The transplant is extremely dangerous and requires doctors to find a donor that has a rare genetic mutation that makes them resistant to the virus. Because of this, it is only reserved for HIV patients who are also suffering from late-stage cancer.

Researchers are still hopeful that this success can have wider reaching impact, though, and help many other elderly HIV patients that are also suffering from a blood cancer at the same time. 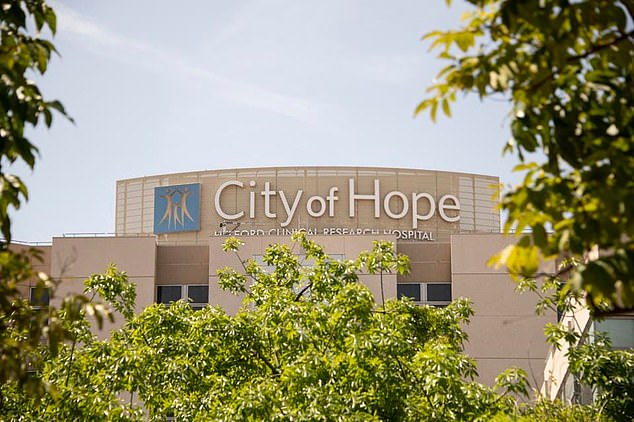 The ‘City of Hope’ patient, named for the California hospital he is receiving treatment at, has been functionally cured of both HIV and his leukemia after a successfull stem cell treatment (file photo)

‘When I was diagnosed with HIV in 1988, like many others, I thought it was a death sentence,’ the man said in a statement from the hospital.

‘I never thought I would live to see the day that I no longer have HIV. City of Hope made that possible, and I am beyond grateful.’

The hospital reports that the 66-year-old patient had been suffering from HIV since 1988 – more than 30 years ago.

He has been using antiretroviral therapy drugs to manage the condition and prevent it from developing into AIDS.

His AIDS diagnosis was the longest term of any of the other who have also had their disease cured by the successful transplant.

After receiving reduced-intensity chemotherapy treatments that would make the transplant more tolerable, the man received a blood stem cell transplant in early 2019.

The donor, who is also unnamed, is unrelated to the man but has a rare genetic mutation called homozygous CCR5 Delta 32.

People who have the mutation have natural resistance to HIV as they have a CCR5 receptor on their immune cells that can block pathways the virus needs to replicate.

These types of transplants can be deadly as there is a chance the bodies immune system rejects, and begins to attack, the implanted cells.

Doctors at City of Hope found success, and within a matter of years both the man’s cancer and HIV has disappeared. 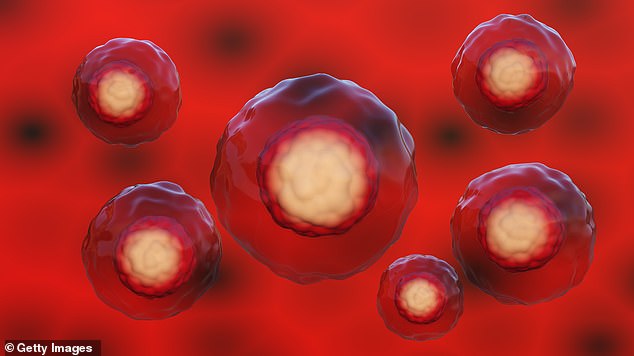 The treatment is incredibly risky as the body may reject the implants, killing the patient. Because of these concerns it is only to be used on people who are already at-risk of death because of a severe case of cancer (file photo) 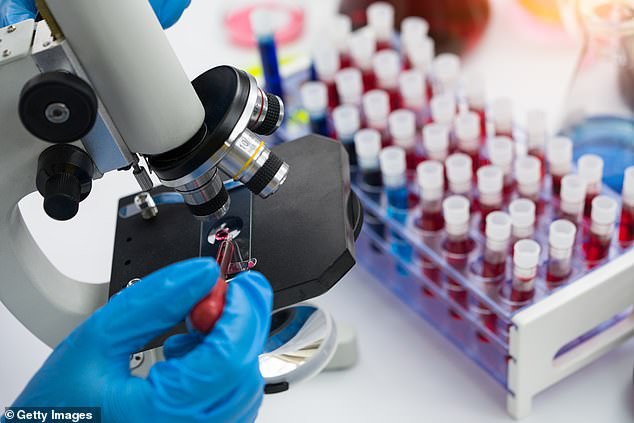 Official figures estimate that around 1.2 million Americans are suffering from HIV, but one-in-eight cases have not yet been diagnosed (file photo)

‘We were thrilled to let him know that his HIV is in remission and he no longer needs to take antiretroviral therapy that he had been on for over 30 years,’ Dr Jana Dickter, City of Hope associate clinical professor in the Division of Infectious Diseases, said at a presentation of the case at the AIDS 2022 conference.

Thousands more Americans may be living with undiagnosed HIV than before Covid struck, official figures have suggested, in a warning sign the devastating virus is spreading again in the United States.

The annual surveillance report from the Centers for Disease Control and Prevention (CDC) reports new diagnoses fell by about two percent every year since 2016. But in 2020, the latest available data, they tumbled 17 percent to 30,000 new cases — which was 5,000 fewer than would be expected based on previous trends.

At the same time the number of CDC-funded swabs for the virus fell by half from 2.4 to 1.2 million, one of the lowest numbers on record, leading officials to fear many cases have gone unnoticed.

In its report the agency said the ‘steep reduction’ in new cases was ‘likely due to disruptions in clinical care, patient hesitancy… and shortages in HIV testing reagents/materials’. Bruce Packett, director of American Academy of HIV medicine, told DailyMail.com it was ‘very likely’ thousands of cases had been missed.

He warned that — in line with other sexually transmitted diseases — cases of HIV may now be ‘level’ or ‘even increasing’, in a reversal of the gradual decline since for the past four years. The CDC warns other STIs like gonorrhea and syphilis may already be at record highs.

America is currently aiming to eradicate the transmission of HIV in just eight years, but experts say although this was the ‘right’ target efforts to hit it have been ‘set back’ by the pandemic.

‘He saw many of his friends die from AIDS in the early days of the disease and faced so much stigma when he was diagnosed with HIV in 1988. But now, he can celebrate this medical milestone.’

Robert Stone, president and CEO of City of Hope, said:  ‘We are proud to have played a part in helping the City of Hope patient reach remission for both HIV and leukemia. It is humbling to know that our pioneering science in bone marrow and stem cell transplants, along with our pursuit of the best precision medicine in cancer, has helped transform this patient’s life.

‘The entire team at City of Hope is honored to make a difference every day in the lives of people with cancer, diabetes and other life-threatening diseases.’

Most recent official data shows estimates that 1.2 million people in the U.S. are suffering from HIV, with around one-in-eight not knowing they are infected.

There were around 34,800 new infections in 2019. While the figure is high it is still around a 70 percent reduction from the peak of the AIDS crisis in the 1980s. The figure has also gradually dropped over time.

Many are using antiretroviral drugs which prevent the virus from developing into full fledged AIDS, but still have to live with HIV for the remainder of their lives.

While this treatment is promising, and could give hope to many of the people suffering, its applications are relatively limited.

The danger of the procedure means that it is only ethical to perform it on people that are already likely to die anyways.

Still though, experts are hopeful that breakthroughs made in recent months will allow for better treatments for the virus to form.

‘The City of Hope patient’s case, if the right donor can be identified, may open up the opportunity for more older patients living with HIV and blood cancers to receive a stem cell transplant and go into remission for both diseases,’ Dickter said.

There are other forms of treatment being developed as well. A New York woman received a ‘haploidentical cord transplantation’, which uses umbilical cord blood and bone marrow from the donor.

Her body reacted well to the treatment, the doctors report, and she quickly saw positive results.

Despite dropping HIV treatment over a year ago, the virus has not resurged in her. Repeated scans of her body show no HIV cells with the potential of replicating and her cells could not be infected in a lab environment.

Like the City of Hope patient, the procedure performed on her is risky and can not be replicated on patients that are not already in a dire situation.

WHY MODERN MEDS MEAN HIV IS NOT A DEATH SENTENCE

Prior to 1996, HIV was a death sentence. Then, anti-retroviral therapy (ART) was made to suppress the virus. Now, a person can live as long a life as anyone else, despite having HIV.

Drugs were also invented to lower an HIV-negative person’s risk of contracting the virus by 99%.

In recent years, research has shown that ART can suppress HIV to such an extent that it makes the virus untransmittable to sexual partners.

That has spurred a movement to downgrade the crime of infecting a person with HIV: it leaves the victim on life-long, costly medication, but it does not mean certain death.

Here is more about the new life-saving and preventative drugs:

It suppresses their viral load so the virus is untransmittable

In 1996, anti-retroviral therapy (ART) was discovered.

The drug, a triple combination, turned HIV from a fatal diagnosis to a manageable chronic condition.

It suppresses the virus, preventing it from developing into AIDS (Acquired Immunodeficiency Syndrome), which makes the body unable to withstand infections.

After six months of religiously taking the daily pill, it suppresses the virus to such an extent that it’s undetectable.

And once a person’s viral load is undetectable, they cannot transmit HIV to anyone else, according to scores of studies including a decade-long study by the National Institutes of Health.

It is 99% effective at preventing HIV

This pill works like ‘the pill’ – it is taken daily and is 99 percent effective at preventing HIV infection (more effective than the contraceptive pill is at preventing pregnancy).

It consists of two medicines (tenofovir dosproxil fumarate and emtricitabine). Those medicines can mount an immediate attack on any trace of HIV that enters the person’s bloodstream, before it is able to spread throughout the body.

DR ELLIE CANNON: Is there a natural remedy to tackle my dreadful insomnia?