Fast-fashion retailer Quiz has revealed a massive boom in store trade over the festive period despite Covid restrictions affecting sales of partywear.

The company said total revenues jumped by a fifth to £8.8million in December as the lack of store closures helped sales in its UK outlets and concessions climb by about £2million from the previous year to £5.2million.

This helped offset a £700million drop in online purchases following the cessation of particular third-party partnerships, though the board noted that its website sales were in line with its forecasts. 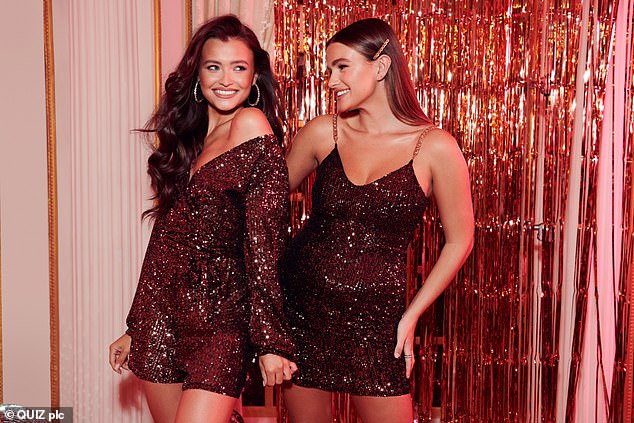 Party time: Quiz said total revenues jumped by a fifth to £8.8m in December as the lack of store closures helped sales in its UK outlets and concessions climb to £5.2m

Revenues at its international business, which includes five shops and 15 concessions in Ireland, also increased by 11 per cent to £1.5million even as the country was impacted by rising coronavirus cases.

Quiz acknowledged that the spread of the Omicron variant ‘notably reduced’ customer levels in the second half of the month and led to many consumers returning partywear apparel to stores.

Fashion sellers were hoping for a roaring trade in the run-up to the Christmas and New Year holidays this time around after last year’s very muted celebrations when people were prevented from mixing indoors with those outside their home and support bubble.

But they took a knock again this year after the UK Government implemented ‘Plan B’ measures in England, and the authorities in Wales and Scotland reintroduced very tough rules on socialising.

From Boxing Day in WaIes, all nightclubs were closed, outdoor events had their attendance numbers capped at 50, and a maximum of six people could meet up in pubs, cinemas and restaurants.

Scotland brought in slightly fewer restrictions in late December, but only 500 people could attend an outdoor event like a football match, while no more than 100 could visit an unseated indoor event. 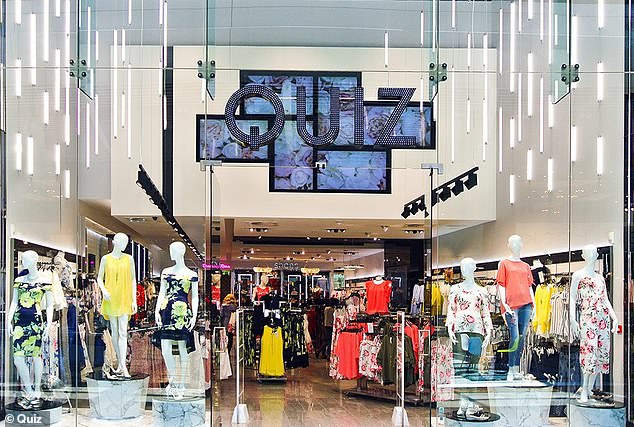 Refund: Quiz acknowledged that the Omicron variant ‘notably reduced’ customer levels in the second half of December and led many consumers to return partywear apparel to stores

Together, these curbs caused a higher number of people to cancel social events and businesses to shun the traditional office Christmas party, hurting demand for formal outfits as a consequence.

Nonetheless, bosses at Glasgow-based Quiz said that they were ‘pleased with the performance achieved in the period given the challenging trading conditions.

They believe that as long as the coronavirus causes ‘no further substantial disruption,’ its full-year results will match their expectations.

Quiz’s latest trading update arrives a month after it released interim results showing its revenue more than doubled to £36.2million in the six months to the end of September on the back of the loosening of trading curbs.

Within UK shops and concessions, sales surged by over 250 per cent to £16.6million, but online trade also rose by £2.6million even after non-essential stores were allowed to reopen by the UK Government in mid-April.

Founded in 1993 by Tarak Ramzan, Quiz developed into a major British fashion brand online and on the high street and listed on the London Stock Exchange’s Alternative Investment Market in 2017.

It has launched collaborations with reality television stars from shows such as The Only Way is Essex, Geordie Shore and Love Island, and has seen its shares climb by about 125 per cent over the last 12 months.

However, their value remains over 90 per cent below their value three years ago following successive profit warnings, Brexit uncertainty, tougher competition, and concerns regarding the treatment of staff employed by its suppliers.

Driving licence backlog for those with medical conditions swells