Coleen Rooney has hit back at WAG rival Rebekah Vardy’s claims she was ‘milking’ her foot injury during their explosive court showdown.

Coleen, 36, was wearing a surgical boot after suffering a fall back in March, and shared an X-ray image of her broken foot via Twitter on Wednesday, revealing the fracture has finally healed.

The image comes after Rebekah, 40, who lost against Coleen in their £3 million Wagatha Christie trial, hinted her rival was ‘milking’ her injury by wearing a moon boot throughout the warring pair’s court showdown. 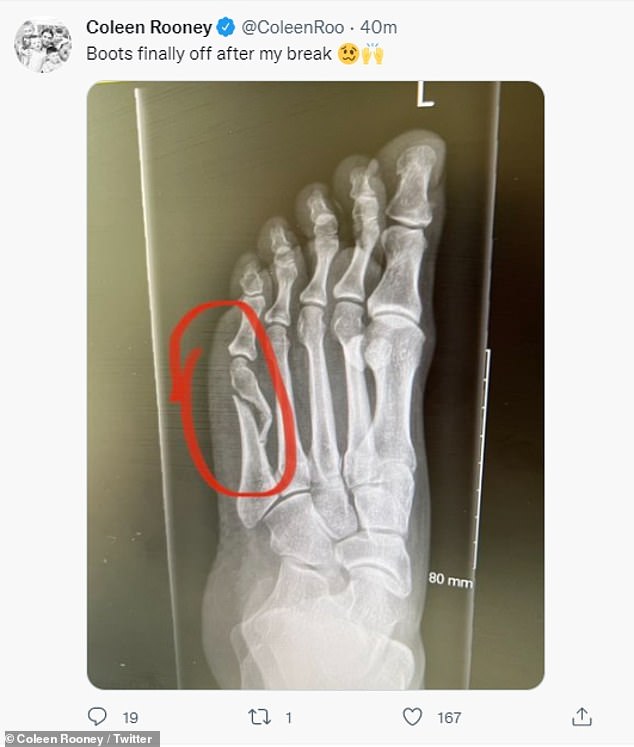 Recovery: Coleen Rooney revealed on Wednesday that her boot was finally off, with the WAG sharing an image of her X-ray on Twitter

Taking to Twitter, the wife of footballer Wayne, 36, uploaded an image of her X-ray of her left foot, circling her broken bone.

Captioning the image, she penned: ‘Boots finally off after my break.’ [sic]

A source told MailOnline back in March: ’Coleen has had a fall at home and suffered a fracture. She was in quite a bit of pain and had to go to hospital.

‘It should take about six weeks to heal. Wayne is doing all he can to help as she is having to hop around and use a crutch.’ 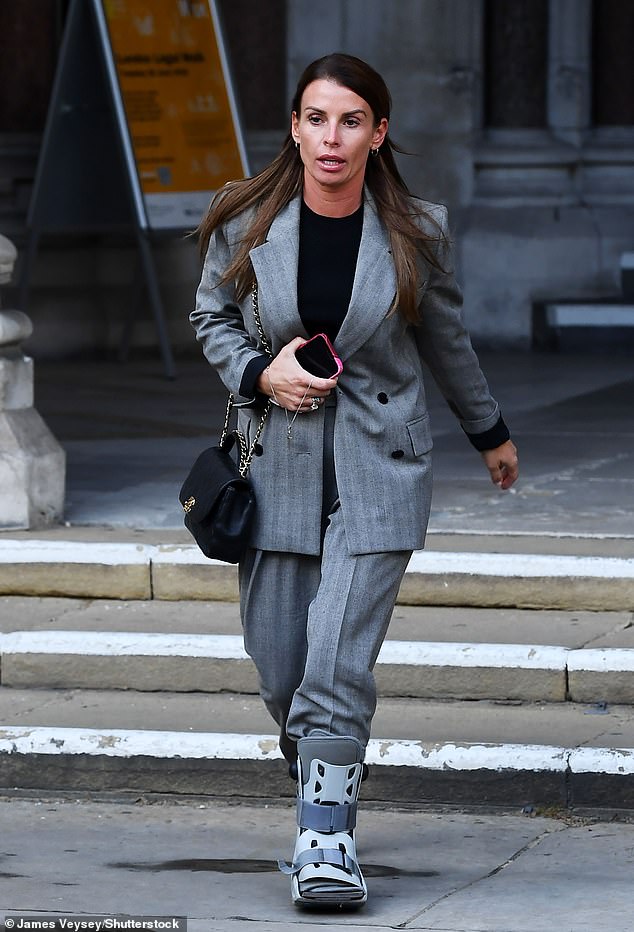 Injury: She had been wearing a surgical boot after suffering a fall back in March, but Coleen is back to her best this week 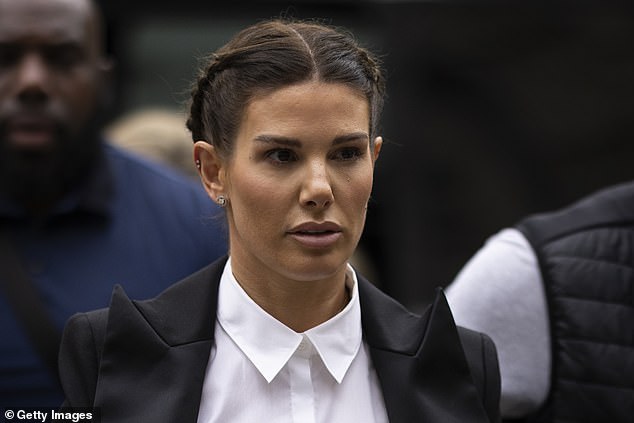 Sticking the boot in: It comes as Rebekah Vardy, who lost against Coleen in their £3 million Wagatha Christie trial, hinted that her rival was ‘milking’ her moon boot

However, it appears the healing process took much longer than expected, with Coleen’s boot only just coming off.

And in response to her health woes, Rebekah hinted that Coleen may have exaggerated things as when asked if the mother-of-four was ‘milking the moon-boot’ during an interview with The Sun.

With Rebekah giggling as she responded: ‘Ohhh I couldn’t possibly [comment]…!’

Elsewhere, while Twitter users some shared their well wishes at Coleen’s post, many followers responded with comical quips, with several centering around fellow WAG Rebekah, 40, whom she had recently triumphed over during their £3million court case.

‘Should make the World Cup still tho’ commented one fan.’ 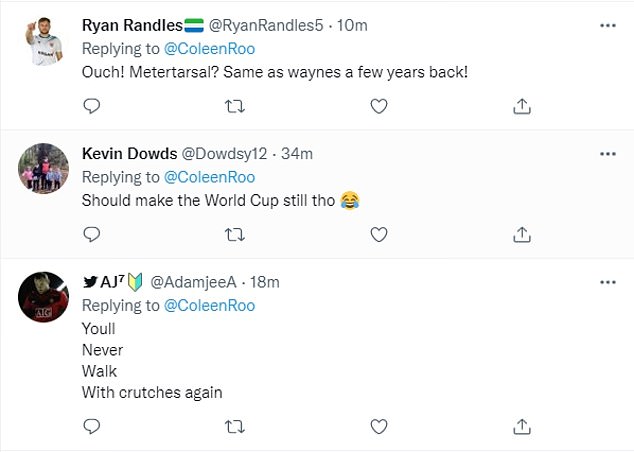 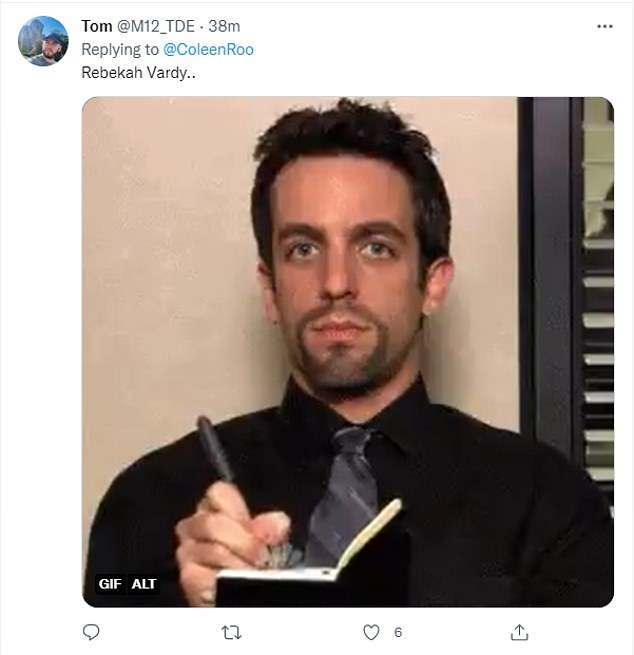 Funny: Fans were quick to share their humorous responses following her Wagatha Christie trial victory against Rebekah Vardy, with one joking that her rival had already shared the news about her boot

While another quipped: ‘We already knew this though. Mrs Vardy Tweeted this half an hour ago.’

Echoing that sentiment, another shared an image of a man taking notes, in reference to Vardy being accused of leaking stories of Coleen.

With another cheeky follower asking: ‘Is that from kicking vardys a**e?’ 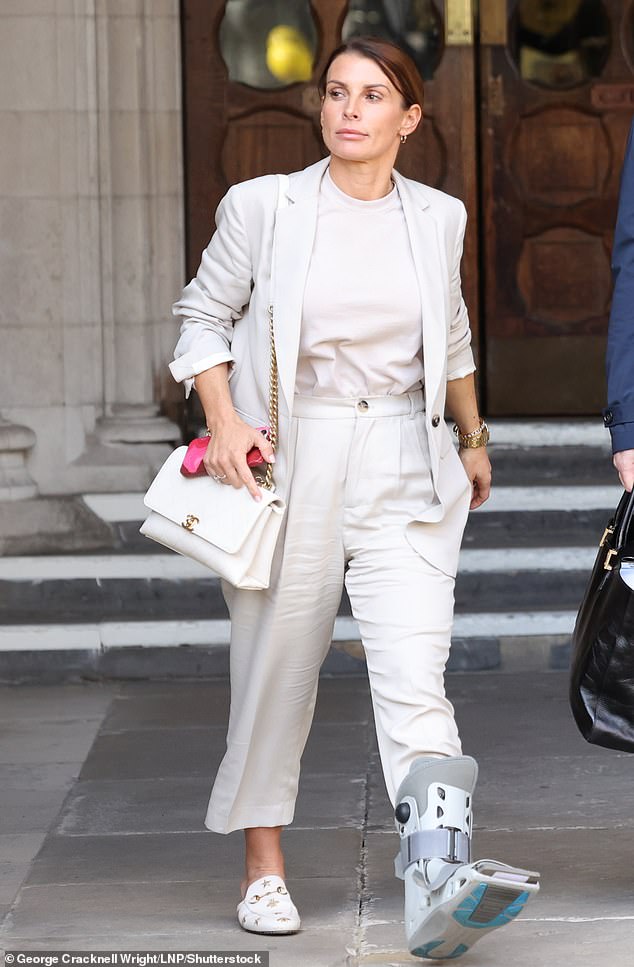 Finally: Taking to Twitter, the wife of footballer Wayne, 36, uploaded an image of her X-ray of her left foot, circling her broken bone

It comes after Rebekah revealed the moment she asked Coleen : ‘What the f*** is this?’ following her now infamous Wagatha Christie post, in which she was accused of leaking a slew of stories about her WAG rival to the press.

The TV personality was enjoying a trip to Dubai when she saw Coleen had taken to social media to accuse her of leaking stories to the Sun newspaper following her own months-long ‘sting operation’, ending the post with the now immortal words: ‘It’s… Rebekah Vardy’s account.’

Speaking out after refuting the claim and taking it to the High Court – sparking a sensational £3million libel battle, which she lost last week – the wife of Leicester City striker Jamie Vardy, 35, said she was in shock upon reading the accusation.

However she extended an olive branch to Coleen, admitting that she would ‘take her to Cafe Nero’ for a coffee if she bumped into her in the street, as she is not one to ‘hold a grudge.’ 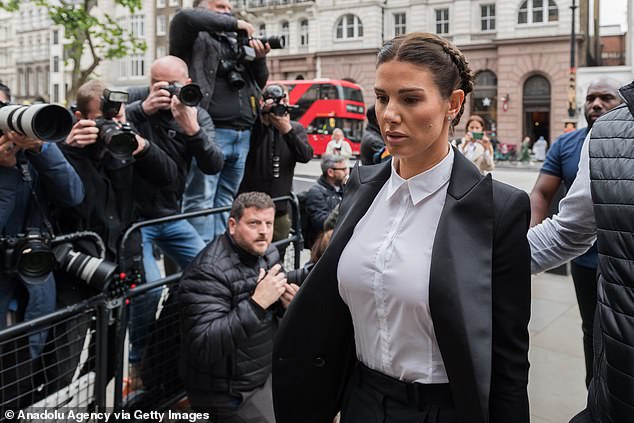 Shocked: It comes after Rebekah revealed the moment she asked Coleen : ‘What the f*** is this?’ following her now infamous Wagatha Christie post

Speaking in an exclusive interview with Clemmie Moodie of the Sun, Rebekah said Coleen had called her from a withheld number in the moments before openly accusing her on October 9, 2019.

She said: ‘All of a sudden my phone imploded. I had a missed call from a withheld number, but then she (Coleen) messaged me and said: ‘I’ve been trying to call you’.

‘I picked up the phone and called her and basically said, ‘What the f*** is this?’

‘Her response was quite rude, quite harsh, and she basically just said, ‘You know what this is’. And at that point I really didn’t know what it was. It was like, ‘No, surely this can’t be real; no one would do that.’

The comments were Mrs Vardy’s most detailed yet about her emotional reaction to the bitter court battle.

They illustrate the psychological toll on the WAG following one of the most high profile and embarrassing celebrity spats of recent times.

But it seems Rebekah is ready to forgive and forget, adding that if she saw her in the street tomorrow she would ask her ‘if she wanted to go for a Caffe Nero.’

She later claims she ‘reached out’ to Coleen in November last year but did not get a response, before insisting she has no ‘bad feelings’ towards her. 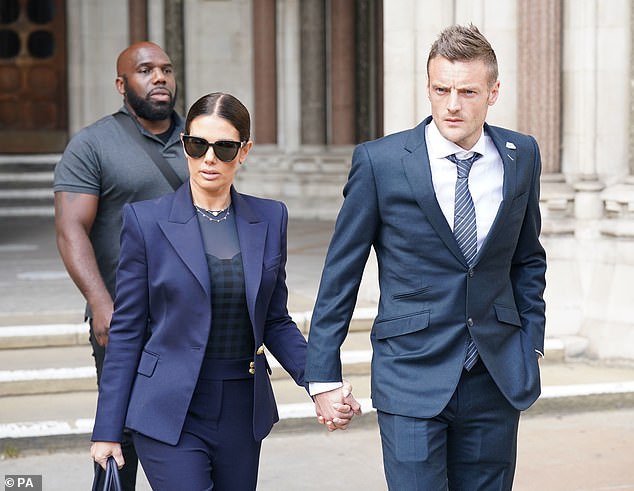 Shocked: It comes after Rebekah revealed the moment she asked Coleen : ‘What the f*** is this?’ following her now infamous Wagatha Christie post