Rishi Sunak has emerged as the frontrunner in the 2022 Tory leadership contest, with the ex-Chancellor receiving the backing of 47 Conservative colleagues. However, a total of eight contenders have received support from the 20 MPs needed to reach the first ballot just days after Boris Johnson told Brits he would give up “the best job in the world” pending a race to replace him. Foreign Secretary Liz Truss, Trade Minister Penny Mordaunt, Tonbridge & Malling MP Tom Tugendhat, recently-appointed Chancellor Nadhim Zahawi, ex-Equalities Minister Kemi Badenoch, previous leadership contender Jeremy Hunt and Attorney General Suella Braverman also joined the ex-Chancellor on the first ballot.

Mr Sunak, who heaped pressure on Mr Johnson to quit by resigning from Number 11 last week, decided to stand on a slightly different platform from many of his leadership rivals.

While others, including Ms Truss, have pledged to introduce immediate tax cuts, the Richmond MP has vowed to hold fire on reducing the tax burden until a later date.

Speaking at his leadership launch in Westminster, the ex-Chancellor said: “Once we have gripped inflation, I will get the tax burden down.

Mr Raab said: “I remember back when we had the referendum in 2016, he was one of the first ones out of the traps – as a young, new Member of Parliament, a backbencher – with all of the pressure on him at the time, and he immediately put his colours to the mast and not just that, he immediately started thinking about how we could grasp the opportunities of Brexit.” 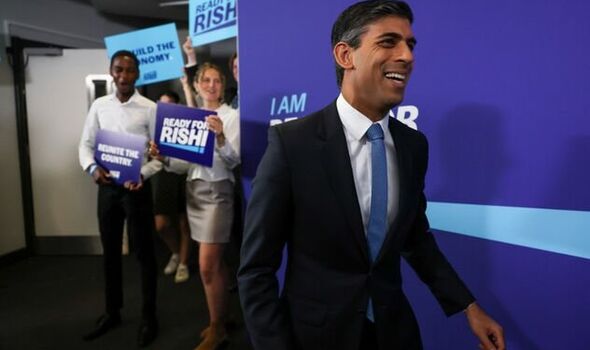 Sunak said: “That’s my economic approach. I would describe it as common-sense Thatcherism.” (Image: Getty)

Transport Secretary Grant Shapps, who briefly staged his own bid to succeed Mr Johnson, was also in attendance as a supporter of Sunak’s campaign.

However, the ex-Chancellor has set out his economic stall yet again and even channelled the fiscal legacy of Margaret Thatcher.

Speaking to the Telegraph, Mr Sunak said: “Inflation is the enemy that makes everybody poorer.

“And if we don’t act to tackle inflation now, it’s going to cost families more in the long run, especially on their mortgage rates.

“So that’s what I’ll be focused on dealing with.”

The ex-Chancellor added: “But we will cut taxes, as I said, and we will do it responsibly.

“That’s my economic approach. I would describe it as common-sense Thatcherism.

“I believe that’s what she would have done.

“And my economics approach has been endorsed by lots of people who have a good understanding of how she thought about these things.

“I think it’s the right approach for the country.”

The former Chancellor has the backing of many central figures in Mrs Thatcher’s Government.

Two other occupants of Number 11 appeared to offer their support for the ‘Ready4Rishi’ campaign after Lord Lamont of Lerwick provided a ringing endorsement and Dominic Lawson, the son of Lord Lawson of Blaby, suggested his father would also back Mr Sunak.

Former Tory leader William Hague also appeared to give the ex-Chancellor a boost after he penned a piece in the Times suggesting Mrs Thatcher would not cut taxes at the moment.

Mr Hague, who preceded Mr Sunak as the MP for Richmond, concluded: “A slew of tax promises should not be the dividing line in this leadership election.

“But if that is the line, Sunak is standing on the right side of it.”

Mr Hague’s intervention came just hours after Ms Truss vowed to axe the National Insurance increase and cut taxes “from day one” to help alleviate the pressures of the cost of living crisis.

Allies of the Richmond MP have rejected the allegations against Mr Sunak. (Image: Getty)

Mr Hunt, who lost to Mr Johnson in the 2019 leadership contest, also suggested he would slash a number of taxes and even bring corporation tax down to 15 percent.

Despite receiving the backing from several big beasts, Mr Sunak has faced criticism since entering the race after a 424-word anti-Sunak dossier circulated around Westminster.

The document described Mr Sunak as a “schoolboy”, a “liar” and even claimed “there is nothing Conservative” about the frontrunner’s economic agenda.

Brexit Opportunities Minister Jacob Rees-Mogg, a loyal supporter of Mr Johnson, echoed such criticisms and accused Mr Sunak of pursuing policies which were “all about the big state”.

The ex-Chancellor’s leadership bid faced other problems over the weekend after a video resurfaced showing a 21-year-old Sunak saying he does not have working-class friends and he was forced to deny links with Mr Johnson’s Brexit-backing ex-Number 10 adviser Dominic Cummings.

However, allies of the Richmond MP have rejected the allegations against Mr Sunak.

Redcar MP Jacob Young told Express.co.uk: “It is both unfair and frankly misleading to characterise Rishi as having been a ‘big tax, big spend’ Chancellor.”

Ex-Housing Secretary Robert Jenrick told GB News: “I think he’s got the best plan to grow the economy in the years ahead, get taxes down over time but do so in a way which is credible and can ensure that we also don’t allow borrowing to get out of control.”

Liverpool drive-by shooting: Police swoop in to lock down area as suspect at large