Constance Wu has revealed she was raped early in her career during a date with an aspiring novelist.

In her upcoming memoir Making a Scene, Wu recalled the confusion she felt after the incident and how she was able to forget about the encounter for years before it all came flooding back once she achieved success in Hollywood.

In an excerpt of the novel obtained by Vanity Fair, Wu, 40, revealed she initially did not consider the experience assault until years later after filming Crazy Rich Asians. 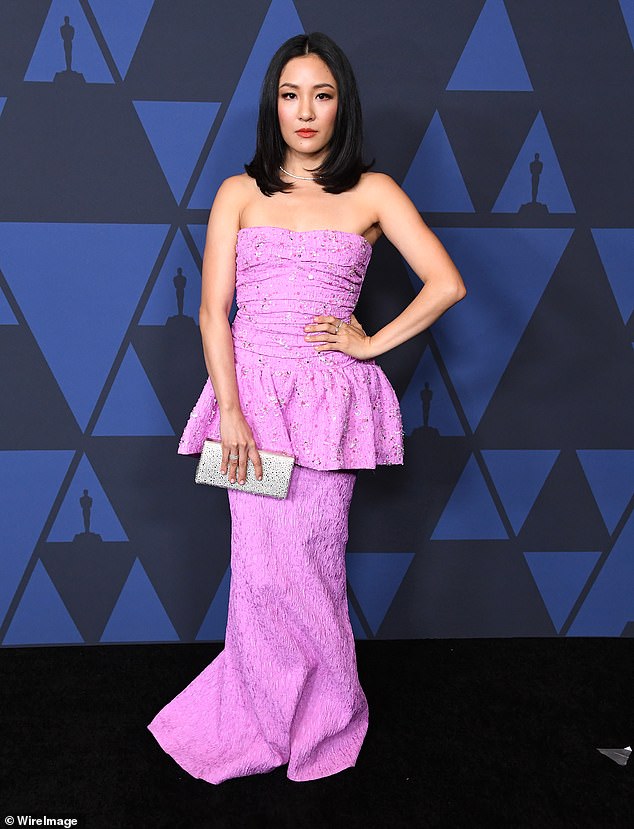 ‘I did not consent to sex’: Constance Wu has revealed she was raped in her 20s during a date with an aspiring novelist; pictured October 2019

Wu recalled initially being dazzled by Ty, an aspiring novelist who worked a regular 9-5 job, when he first asked her out.

‘When Ty asked me out on a date, it felt like I had been invited to the popular kids’ table. He was thirty-six and he was a real New Yorker. Ty was tall and broad-shouldered. He had the kind of skin where you could tell he probably had freckles on his shoulders,’ she wrote.

The alleged rape occurred during their second date, when Ty invited her to his apartment after dinner to give her a gift.

Constance ignored a ‘twinge of warning in my gut’ and entered his apartment, recalling Ty did not appear ‘threatening or shady’ and she did not want to insult him by having him believe she perceived him as a threat. 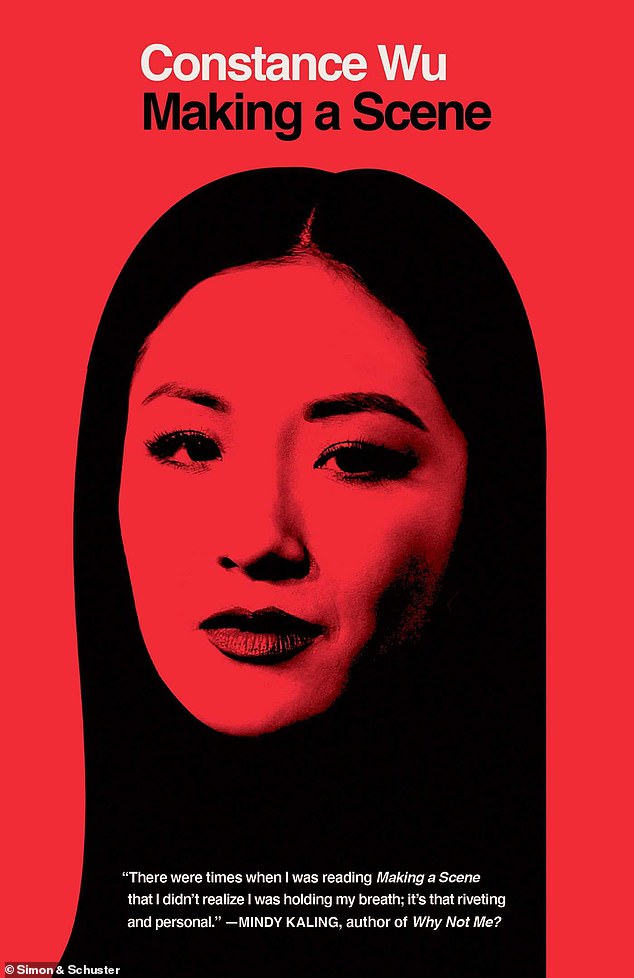 Revealing: Wu recalled the assault in her upcoming memoir of essays, Making a Scene

Once inside his place, Ty gave her a ‘beautifully wrapped’ gift and asked her not to open it until she returned home.

‘It was a sweet gesture, and I kissed him to say thanks,’ Constance wrote.

The kissing led to ‘some fooling around’, and Constance ‘let him take some of my clothes off and I let myself be touched.’

‘He felt me between my legs, and I shyly pushed him away, but he could feel my arousal,’ she recalled.

Ty then put a condom on, but Constance told him she was not ready.

‘He took off his pants and started putting the condom on—an obvious signal for sex—which I did not want. So I said, “Oh gosh, I’m sorry, I’m not ready to have sex with you,”‘ she recalled.

Despite her protestation, Ty continued. 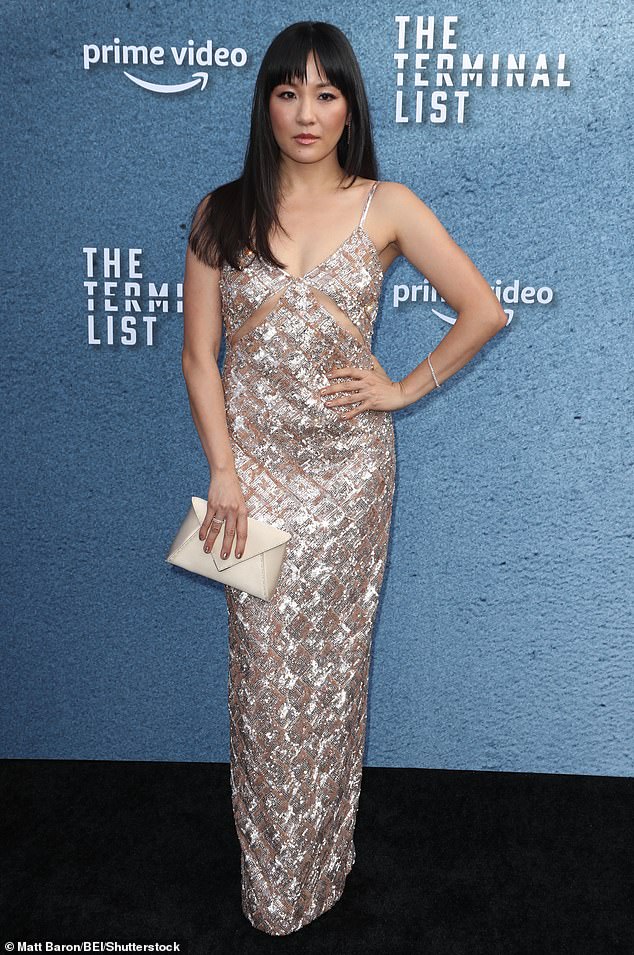 ‘It felt like I had been invited to the popular kids’ table’: Wu recalled initially being dazzled by Ty, an aspiring novelist who worked a regular 9-5 job, when he first asked her out; pictured June 2022

‘I said it clearly. But he merely smiled, as if he knew better, as if my vagina’s wetness was more telling than the words coming out of my mouth. He gently got on top of me and held my face in his hands. He kissed my lips, my forehead, and looked into my eyes. He was being so tender.’

Once again, she told Ty she was not ready, but he still went ahead and did it.

‘I repeated, as seriously as I could, “Really, I’m not ready for sex,” my face flushing. He smiled at me again like I was a baby kitten, held me close, kissed me, gently moved my legs apart, and then he . . . did it anyway.

Constance said she decided against fighting back because she didn’t ‘want to make a scene.’

‘And since he was wearing a condom, I rationalized that it wasn’t that bad,’ she added.

To this day, she still struggles with the fact that she quickly achieved orgasm during the experience.

‘It shames and confuses me even today to admit this part: I had an orgasm quickly, something that rarely happens the first time I have sex with someone. I hate that it happened,’ she said.

Security: Wu said the truth of the incident dawned on her after she filmed Crazy Rich Asians; pictured in the film

However, she did not indicate to Ty she had climaxed, and left after he cuddled her.

‘But I didn’t give him any indication that I had orgasmed, and he didn’t seem to care. He finished. He kissed me on the forehead again. Held me close. Cuddled me and nuzzled my ear. I tried to act normal. Giggled to hide my fear and discomfort. He wanted me to stay over. I mumbled an excuse about needing to get back to my apartment for my skin care regime. I said “sorry” a million times,’ she said.

As she left, Constance remembered feeling ‘weird’ as she attempted to discern what exactly had happened to her.

In that moment, she said she did not ‘feel raped.’

‘He helped me get dressed and then handed me the gift box. He kissed me, said he couldn’t wait to see me again. I took the box and kissed him back. “Thank you,” I said. I wasn’t even upset. I just felt . . . weird. Maybe because there had been no physical force; maybe because I had pretended that everything was cool afterward. But I didn’t feel attacked or assaulted or coerced and I certainly didn’t feel raped. He just didn’t listen to me, I thought,’ she said. 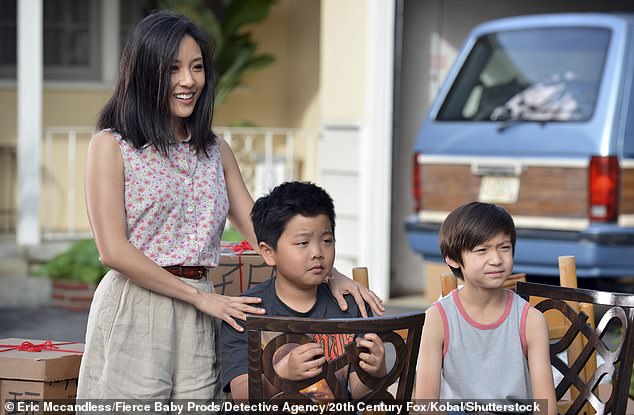 Success: Constance believes the memory resurfaced once she finally achieved a voice in Hollywood with roles in Crazy Rich Asians and Fresh Off The Boat; pictured with Fresh Off The Boat co-stars Hudson Yang and Forrest Wheeler

The next day, she opened the gift with her roommate, and was stunned to see it was full of rose petals, pearl earrings, and a 20 page manuscript he had written called ‘The Beating Heart of the Forest.’ To her shock, the book was about ‘the beautiful Princess Warrior Constance Wu.’

Ty continued texting and calling Constance in the weeks to follow, but she never returned any of his messages.

More than 10 years later, after forgetting about the incident, it finally dawned on Constance that she had been raped.

‘I was on a plane from Singapore, where I had finished filming Crazy Rich Asians. I’d just woken up from a nap when the realization hit me like a flood. Ty raped me. He raped me, and I hadn’t done anything about it. A strange sound involuntarily croaked out of my throat, almost a squawk. Embarrassed, I hoped no one on the plane heard me. My heart was pounding. For a split second, I panicked. But then I talked myself out of the panic,’ she wrote.

Constance grappled with the realization in the days ahead. 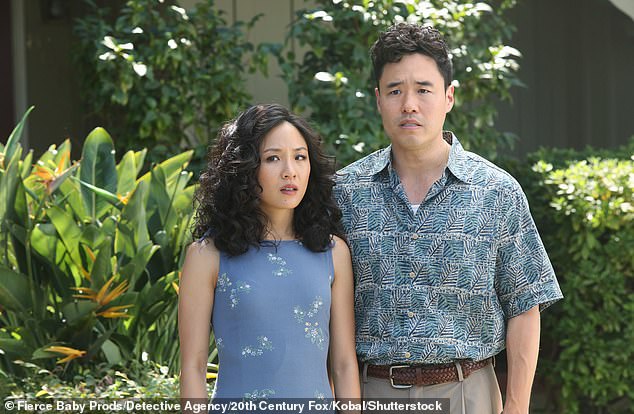 Respect: ‘I’d reached a place in my life where people actually listened to me,’ she realized; pictured with co-star Randall Park in Fresh Off The Boat

‘What would have happened if I had remembered it sooner?’ she wondered. ‘If I had realized it was rape back when it happened, I could have reported it . . . but who would have believed me? After I had orgasmed, cuddled with him, pretended I was happy, accepted his gift, kissed him good night, even texted him home safe, thank you. He had text receipts and all I had was my voice saying I’m not ready for sex. I hadn’t, like, recorded it! Who would have believed me?’

‘If the memory had resurfaced right when my activism was finding its voice, I could have utilized it as a courageous confession to reinforce my political stance. But then I likely would have lied about the orgasm to simplify the story and protect myself from criticism.’

Constance now believes the security she had achieved in life allowed the memory to resurface.

‘I’d reached a place in my life where people actually listened to me,’ she realized.

The memory of Ty attempting to reach out to her months after their encounter emerged also re-emerged at this time.

‘A few months after Ty raped me, I answered a phone call from an anonymous number.

”Hi! It’s Ty!” I froze. “I miss you!” he said, that familiar warmth in his voice, as though months without communication hadn’t passed. Panicked, I was nice back to him and said, “I’m running into an audition right now so could I call you later?” He said sure.’

She ended up never returning his call, but sent an email turning him down: ‘I’m sorry about the lack of contact. You’re great, but I just don’t want to date you. I’m sorry,’ she wrote.

‘I think he must have felt hurt and rejected, but instead of being sad that a girl didn’t like him, he turned to anger. He made a scene, calling me a heartless b*tch, an ugly whore who would never get anywhere in life. That was the last I ever heard from him,’ she said.

‘I did not consent to sex. Maybe it wasn’t violent, but it was rape. Period,’ Constance writes.

Constance’s book, Making A Scene, will be released October 4.