Constance Wu wept as she spoke about sexual harassment she had experienced from a producer while working on the series Fresh Off the Boat.

The Richmond, Virginia native, 40, appeared Monday on Late Night with Seth Meyers, where she said she initially ‘didn’t want to write’ to include the details of the aforementioned experience in her new book Making a Scene.

‘That was the last essay I wrote for the book, and only after being, like, pushed by my editor, like, “You should write about this. This is what people want to hear,”‘ the Crazy Rich Asians actress said. ‘And I was like, “I’m done with that chapter in my life.”‘ 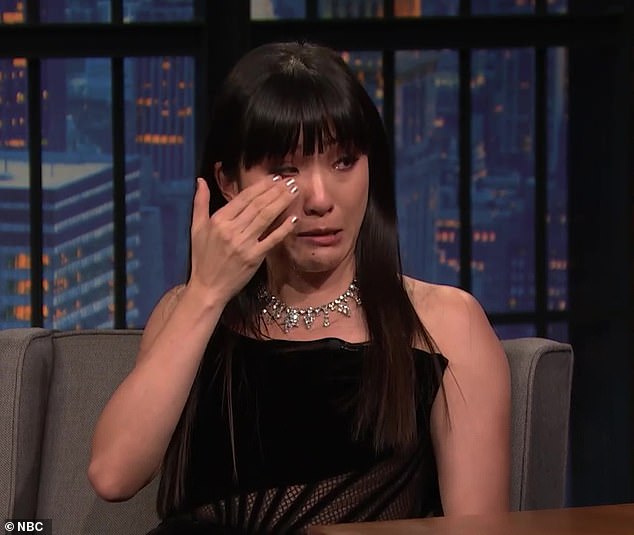 The latest: Constance Wu, 40, wept as she spoke about sexual harassment she had experienced from a producer while working on the series Fresh Off the Boat appearing Monday on Late Night with Seth Meyers

Wu said that she was scared of being retaliated against if she spoke out about the harassment when it was occurring.

‘I had never done anything big before,’ she said. ‘I had just graduated from being a waitress. I was scared of being fired. Once I, sort of, felt a little bit of job security then I started saying no to this producer, which infuriated him.

‘But it was okay, so I thought, ”You know what? I handled it.” I don’t need to stain the reputation of this show or of this producer. I can just keep it inside.’

Wu said that she was ‘never really able to be [herself] on set,’ noting, ‘I’d see my abuser being buddy-buddy with everyone else, knowing what he had done to me.’ 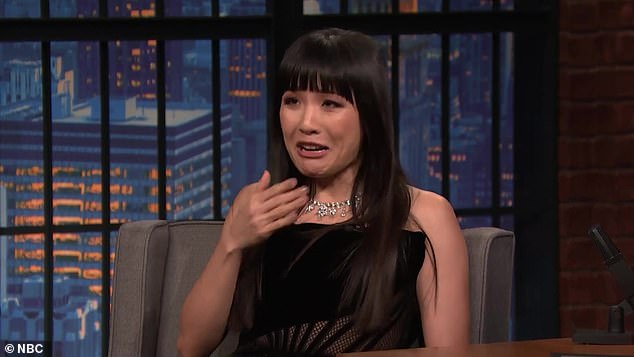 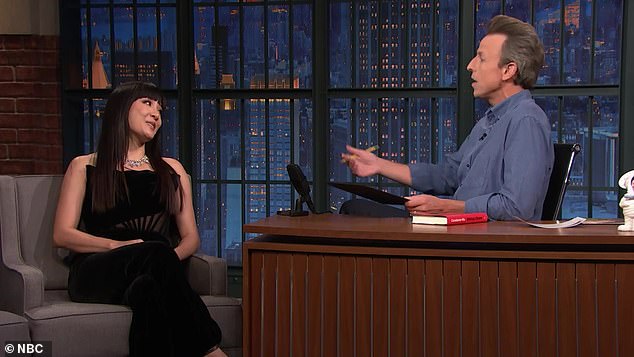 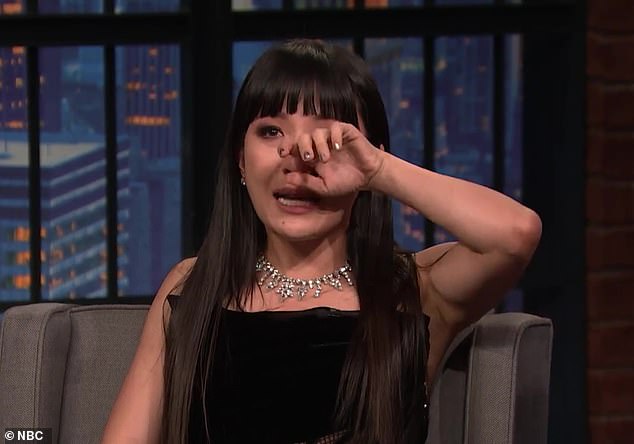 Wu said that her anguish over what was happening led her her to tweet about her disappointment that the series had been renewed for a sixth season in 2019.

She said through tears on the show, ‘The thing I learned is that bad feelings and abuse don’t just go away because you will it to.

‘It’s gonna come out somewhere. I think people didn’t understand the context of those tweets. And thank you for not making fun of it, because it led me to a really dark time.’ (She revealed in July that she had attempted suicide amid the negative backlash to her tweets.)

She told Meyers, ‘I decided to include it in the book because I think it’s important that we engage in curiosity and empathy before we go straight to judgment because if somebody does something that is out of character for them, it usually means something is going on in their life.’

Wu also detailed how she felt amid the backlash to her tweet three years ago while appearing on Red Table Talk, in a preview for Wednesday’s episode.

‘It’s actually hard for me to talk about without getting emotional,’ she said. ‘People were basically canceling me for being ungrateful and ungraceful. They were saying I didn’t think of the other people’s jobs on the show, how selfish that was and how I was, like, behaving like a diva.’ 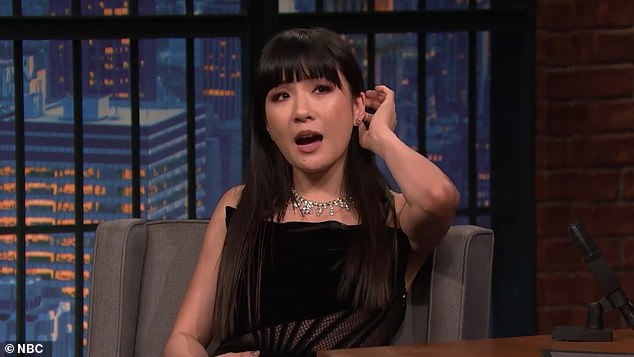 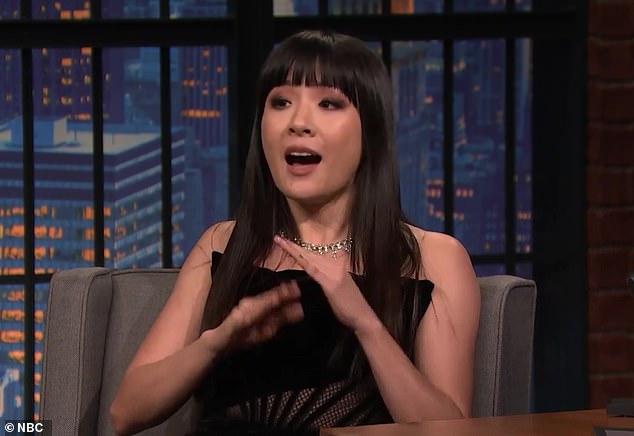 ‘I didn’t want to sully the one show with sexual harassment claims against the one Asian American man who was doing all this better work for the community.’

Wu first made the revelation in her upcoming new memoir, Making A Scene, and again when she talked with the New York Times ahead of the release of the book.

While the actress discloses details about how the man exhibited controlling behaviors during the show’s first two seasons, she would only refer to the man by using an initial.

Loosely inspired by the life of chef and food personality Eddie Huang and his 2013 autobiography, Fresh Off The Boat was the first network TV sitcom in the U.S. to feature a family of Asian Americans as main characters in over 20 years.

The show, which depicted a Taiwanese-American family living in Florida in the 1990s, went into production in 2014, and eventually premiered on ABC the following February to positive critical reception.

Wu maintains that producer started showing those controlling behaviors in the first season, which included ‘demanding that she run all her business matters past him and telling her what to wear.’

‘Fresh Off the Boat was my first-ever TV show,’ the actress told the Times, before explaining her mindset at the time. ‘I was thrown into this world. I don’t have parents in the industry. And because I was 30, people thought I knew what I was doing. It made me paranoid and embarrassed.’ 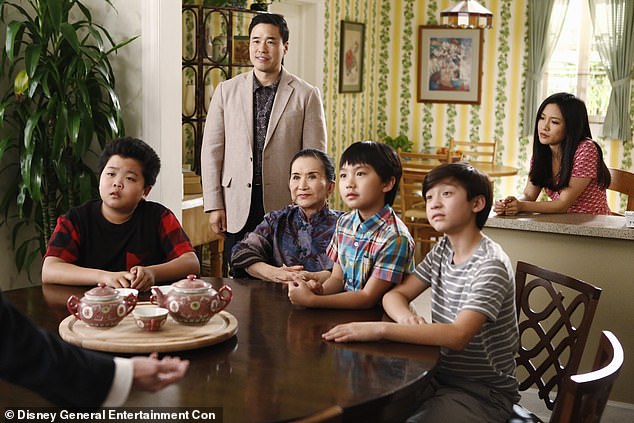 Impactful: Loosely inspired by the life of chef and food personality Eddie Huang and his 2013 autobiography, Fresh Off The Boat was the first network TV sitcom in the U.S. to feature a family of Asian Americans as main characters in over 20 years; she is pictured on the right with co-stars Hudson Yang, Randall Park, Lucille Soong, Ian Chen and Forrest Wheeler

Wu, whose real-life parents emigrated from Taiwan, went on to reveal to the Times that the producer’s inappropriate behaviors escalated when they attended a sporting event and he allegedly ‘placed his hand on her thigh, his hand ultimately grazing her crotch.’

The actress confronted the man and asked him to stop, and eventually they both just tried to move on past the incident.

During her conversation with the New York Times, Wu revealed that she decided not to speak up about his controlling behaviors at the time due to fear of consequences, but as time went on and the show became a success she began to feel more empowered and comfortable about her status within the show.

By the time Wu and the man had an argument over attending a film festival together, they were no longer speaking with each other. 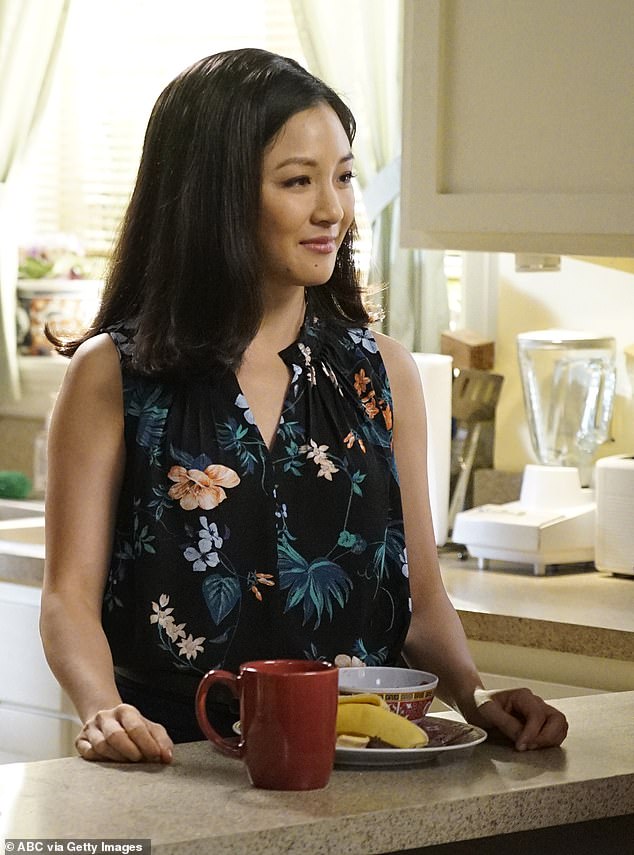 Allegations: The actress alleges the senior producer exhibited controlling behaviors during the first two seasons of the show, that eventually escalated to an incident where ‘he placed his hand on her thigh’ and his hand ‘ultimately grazed her crotch’

‘I kept my mouth shut for a really long time about a lot of sexual harassment and intimidation that I received the first two seasons of the show,’ the Virginia native said during a panel at the Atlantic Festival last Friday.

She explained, ‘Because, after the first two seasons, once it was a success, once I was no longer scared of losing my job, that’s when I was able to start saying “no” to the harassment, “no” to the intimidation, from this particular producer.’

Ultimately, she decided not to go public and identify the man to avoid ‘staining the reputation of the show.’

Fresh Off The Boat would go on to air for six seasons, ending in February 2020 after earning the distinction of being the first series featuring an all Asian American main cast to broadcast over 100 episodes.

So far representatives for Fresh Off the Boat and 20th Television have not publicly responded to any of the accusations.

Wu initially kept quiet about the sexual harassment and intimidation accusations due to fear of consequences, like losing her job on the show; ultimately, she decided not to identify the man to avoid ‘staining the reputation of the show’; she is pictured with co-star Randall Park