Coronation Street actor Ian Bartholomew made a surprise appearance during the first round of the Britain’s Got Talent auditions on Sunday as he performed his own song This Time It’s Forever.

The soap star, 67, who played domestic abuser Geoff Metcalfe on the ITV show, sung his 2020 charity single in support of survivors of domestic abuse, with any money raised from sales of the song going to Women’s Aid.

As he took to the stage, he said according to The Sun: ‘I am from Cheshire. I was in Coronation Street. I played nasty Geoff Metcalfe. He was a nasty piece of work. I started in 2018 and I fell off a roof in the show last year. I am 67.

Unexpected: Coronation Street actor Ian Bartholomew, 67, made a surprise appearance during the first round of the Britain’s Got Talent auditions on Sunday

‘The song I am singing I wrote myself and was used in a campaign by Women’s Aid to raise awareness about domestic abuse. I am not here for me, I am here for the charity and the abused victims.

‘The song came out of the first lockdown when cases of domestic abuse were going through the roof and three women were dying every two weeks and I was so angry and I still am.’

Ian said he hoped appearing on Britain’s Got Talent would raise awareness for the survivors of domestic abuse and the work Women’s Aid does. 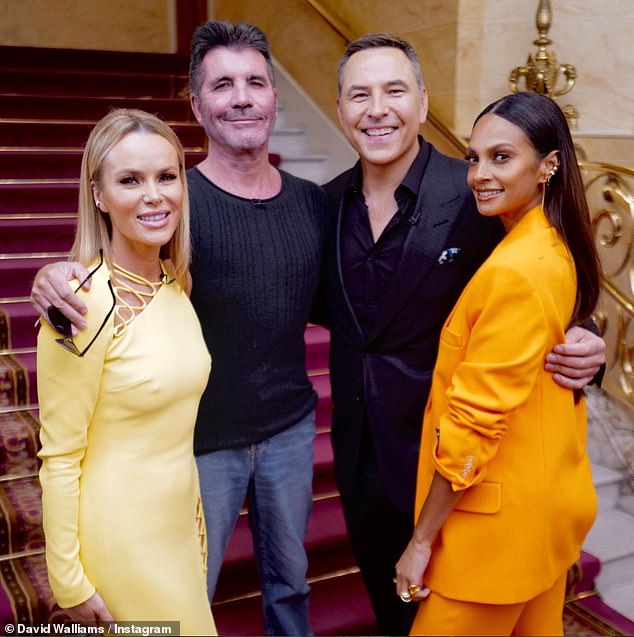 Back again: Simon Cowell, 62, was back on the Britain’s Got Talent judging panel with Amanda Holden, 50, David Walliams, 50, and Alesha Dixon, 43

Show judge David Walliams, 50, told Ian he did ‘brilliantly’ and he did well with his ‘unexpected’ performance which touched on ‘a very difficult subject’.

Amanda Holden, 50, suggested Ian’s audition would have had a bigger impact if he had some survivors alongside him, perhaps singing in a choir.

Simon agreed, telling Ian he needed ’50 or 100 voices’ alongside him on stage. 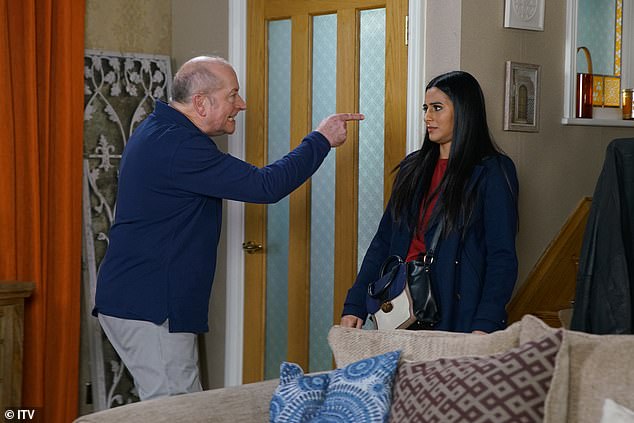 Making a difference: The soap star, who played domestic abuser Geoff Metcalfe on the ITV show, sung his 2020 charity single in support of survivors of domestic abuse

MailOnline has contacted representatives for Ian and Britain’s Got Talent for comment.

Ian previously said of his track: ‘The song This Time it’s Forever, is about escaping from, and surviving domestic abuse.

‘The inspiration behind it stemmed from the research I did for the role of Geoff and the Coronation Street coercive control storyline in which Women’s Aid was heavily involved, and, because of that, I wanted to support and help the charity in its life-saving work with survivors of domestic abuse. 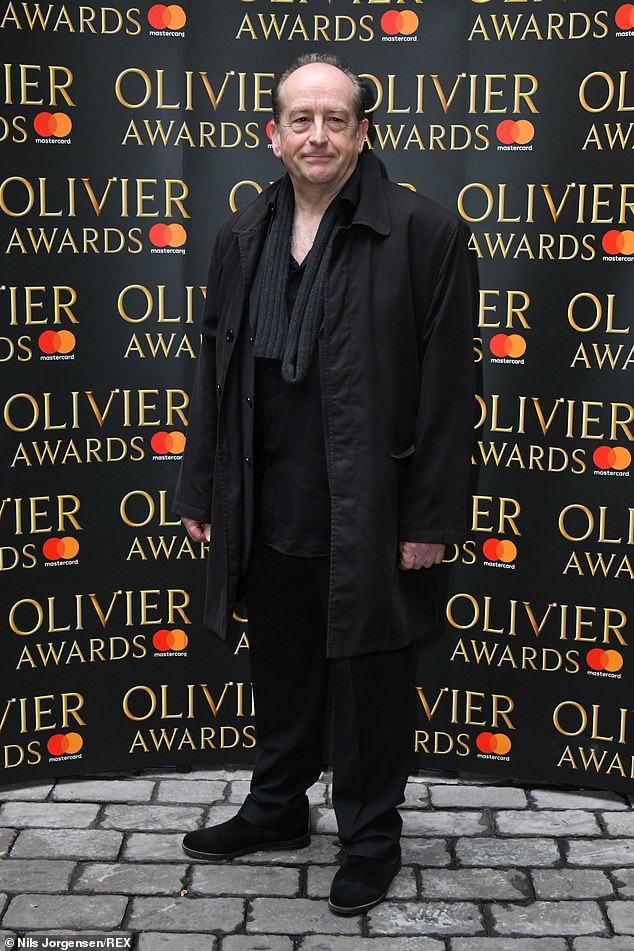 Raising awareness: Ian previously said of his track: ‘The song This Time it’s Forever, is about escaping from, and surviving domestic abuse’ (pictured 2017)

‘The point of the song is to raise awareness and funds for Women’s Aid so it can continue to combat the suffering and pain caused by the alarming frequency in our society of this appalling crime. It is not just a storyline on TV.

‘It is happening right now, for real, in a house near you. We must all do what we can to bring an end to domestic abuse. This is my contribution.’

A JustGiving page has been set up to raise funds in relation to the song for Women’s Aid, with £4,166 being pledged at the time of writing. 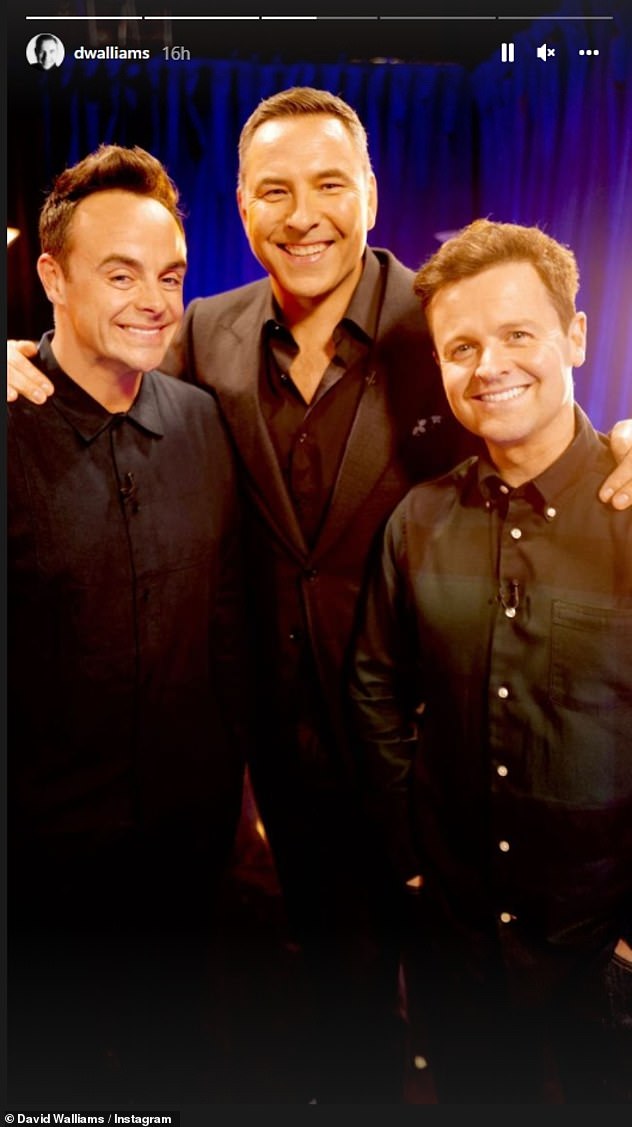 Return: David , 50, posed alongside hosts Ant McPartlin, 46 and Declan Donnelly, 46 at the auditions

Ian joined Coronation Street as Geoff in 2018 with the character being a love interest for Audrey Roberts (Sue Nicholls).

He went on to marry Yasmeen Nazir (Shelley King) and Geoff began to control her in 2019, prompting Yasmeen to eventually fight back and hit Geoff over the head with a wine bottle before stabbing him in the neck with it.

Geoff survived and claimed Yasmeen was the abusive person in the relationship but footage later emerged to contradict Geoff’s claims.

Villain Geoff painted Yasmeen as a violent alcoholic in court following the stabbing, with Geoff attempting to influence witnesses and character references during the trial.

Yasmeen was found not guilty despite Geoff’s attempts, with the character branding the trial a ‘farce’. 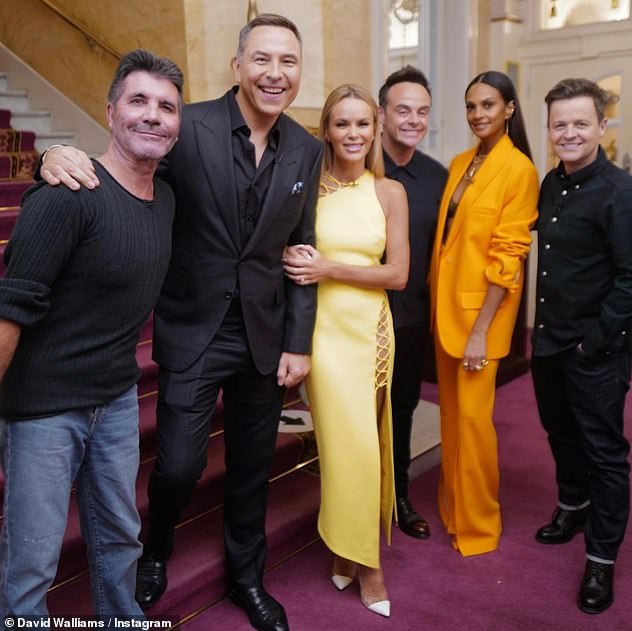 Gang’s back together! Amanda glowed in a skintight yellow gown that clung to her sensational curves, and boasted a thigh-high slit to show off her sculpted legs

He later tried to convince Yasmeen to sell her share in the house they owned so he could live with his new love interest Christine, which she agreed to as along as she could return to collect some photos.

Geoff agreed but set fire to the pictures prompting a chase to ensue and Geoff to dramatically fall to his death from the roof.

Meanwhile, Simon posed for a slew of snaps alongside his fellow judges Amanda, David and Alesha Dixon, 43, as well as show hosts Ant McPartlin, 46 and Declan Donnelly, 46, this weekend.

David took to his Instagram page to share the happy photos, writing: ‘Reunited’ with a simple heart alongside a photo of him and pal Simon.

A video was also shared to the official Britain’s Got Talent Instagram page of the group bursting through a paper banner proclaiming ‘welcome back’ while cheering wildly.

Bosses captioned the clip: ‘We’re back, baby! What a fab first day’. 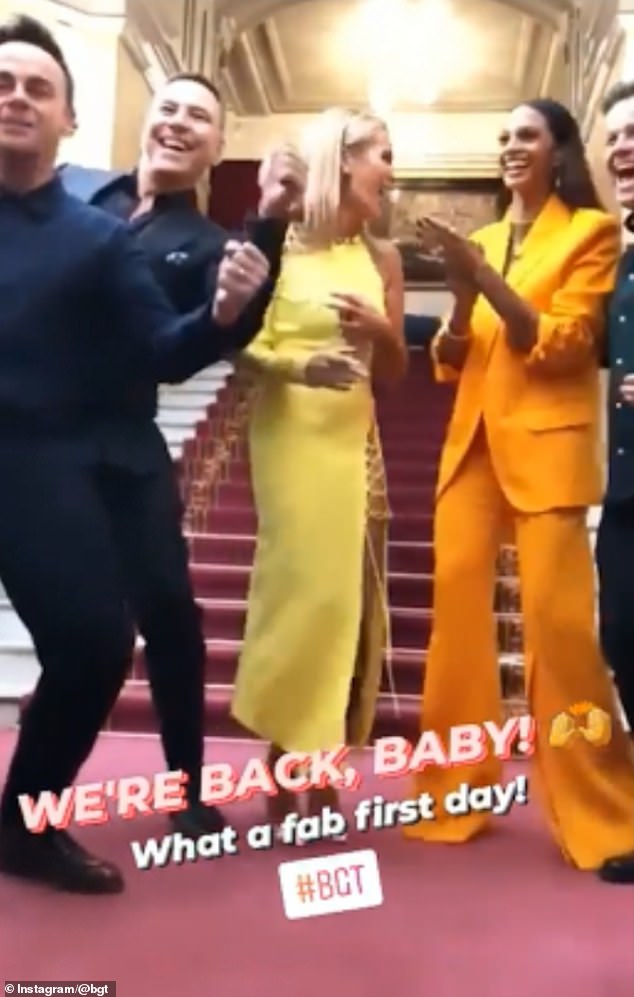 Warm welcome: They captioned the clip: ‘We’re back, baby! What a fab first day’

It was also revealed the day had been full of excitement already, with not just one but two golden buzzers being used on the first day.

The fifteenth series, planned for production and broadcast last year, was met with concerns from ITV, Thames and Syco Entertainment on how to safely conduct filming amid new government restrictions to combat the COVID-19 pandemic.

An initial decision was to postpone production until later on that year, however all involved agreed that they would not produce a new series until 2022.

It was reported on Saturday that Simon will remain on Britain’s Got Talent until 2025 as the show’s deal is extended.

The TV personality will be a judge on the TV show for another four series after ITV extended the programme’s current deal by 12 more months, claims The Mirror. 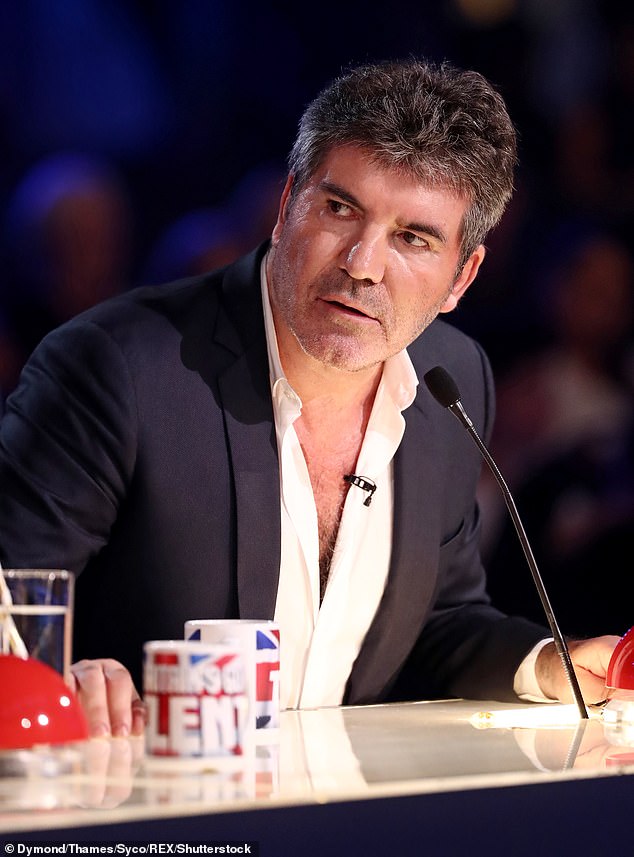 Part of the furniture: The TV personality will be a judge on the TV for another four series after ITV extended the talent show’s current deal by 12 more months, claims The Mirror