The UK will still have to live with ‘substantial’ levels of Covid deaths after lockdowns come to an end because the virus won’t go away, one of the Government’s scientific advisers said today.

Professor Andrew Hayward, an infectious disease expert based at University College London and a member of SAGE, said he believes ‘we’ve been through the worst of this’.

But he said vaccines won’t totally get rid of the virus and the country would still have to live with ‘a degree of mortality that will be substantial’.

SAGE has predicted that a third wave of the virus is inevitable and tens of thousands more people will die because millions will be left unprotected by vaccines, which aren’t 100 per cent effective and won’t be taken by everyone.

Almost 125,000 people in Britain have been killed by Covid so far in the pandemic, but deaths are now down to a four-month low at 255 per day from a peak of more than 1,200 per day at the end of January.

This drop means that the number of ‘excess’ deaths – those above what is considered normal for the time of year – may already be back to zero, meaning deaths from all causes are now at average levels, one doctor has claimed.

Professor Carl Heneghan, an evidence-based medicine researcher at Oxford University, said England ‘should be back to somewhere near normal for this time of the year’. 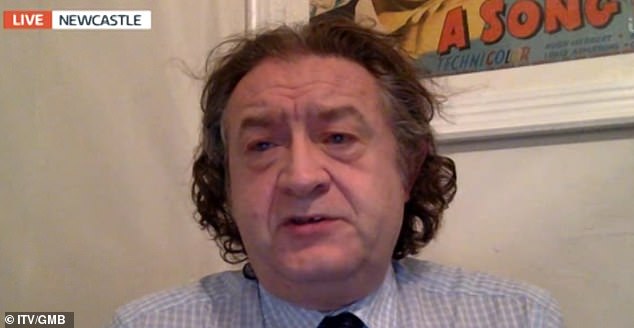 Professor Andrew Hayward, a UCL infectious disease expert, said on Times Radio: ‘We’ve been through the worst of this’ 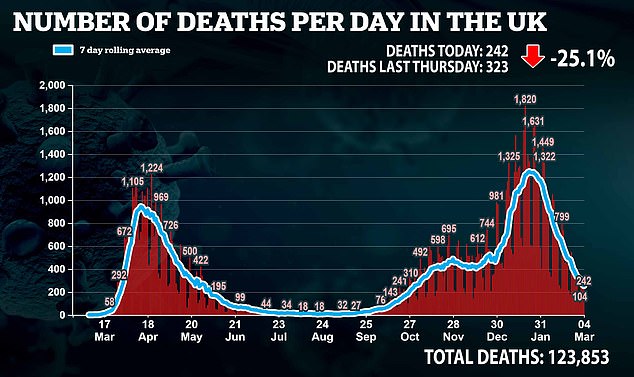 Coronavirus cases and deaths in the UK fell again yesterday to just 6,573 more positive tests and 242 fatalities, with both measures down more than a quarter on the same time last week.

Infections were down 34 per cent compared to last Thursday while deaths dropped 25 per cent, continuing the shrinking of the country’s outbreak.

Another 278,956 people received a Covid vaccine for the first time, along with 68,450 people getting a second dose. A total of 20.9million have now been immunised, with 964,000 of them receiving a full two doses.

Separate Public Health England data showed positive tests done through NHS Test and Trace have now been falling in every region and age group for seven weeks in a row.

A weekly report showed cases are in freefall across the country and only two out of 149 local authorities recorded an increase last week – Hull and Wokingham.

Speaking on Times Radio today Professor Hayward said: ‘Given the societal trade-offs, we are going to have to live with a degree of mortality that will be substantial.

Vaccines won’t completely stop people dying of Covid because they are not 100 per cent effective, meaning some will still get sick even after having a jab.

And not everyone will take them – some people will decide not to, while others won’t be healthy enough to be vaccinated.

Prime Minister Boris Johnson has publicly accepted that more people will die of the disease when lockdown comes to an end but said the country cannot live like it is now in the long-term.

He said in February: ‘The vaccines reduce the danger of Covid, they save lives and they keep people out of hospital. But no vaccine against any disease has ever been 100 per cent effective.

‘So, whenever we ease the lockdown – whether it’s today or in six or nine months – we’ve got to be realistic and accept that there will be more infections, more hospitalisations and therefore, sadly, more deaths, just as there are every year with flu.

‘Even if we sustained the lockdown indefinitely, which would itself cost lives and do immeasurable harm to our children, we would not be able to eradicate this disease.’

Professor Hayward agreed that the virus would likely become like flu in the future.

Flu circulates every winter and kills thousands of people, mostly over-65s, and is tackled with constantly updating vaccines, as Covid will likely be.

Speaking about mutated versions of the coronavirus, Professor Hayward said: ‘The vaccines will still take the sting out of it, if you like, and reduce the case fatality rates.

‘Of course, we have the technology to update the vaccines and I think that’s where we’re going really, a situation that will be much more like flu.

‘The numbers of deaths will be much more like flu, the approach to surveillance of new strains and development of new vaccines and regular annual vaccines will be like that. And we will get back to normal.’

According to another scientist, the number of people dying of all causes may already be getting back to normal.

Professor Carl Heneghan said he expects the Office for National Statistics to show that deaths were back to average levels for the time of year by the end of February.

The report is weekly and he said he would expect to see the effect in data for last week.

Deaths can drop to average levels without Covid deaths being eradicated, if the number of people dying of non-Covid causes is below usual levels.

Coronavirus may have killed so many people who would otherwise have died of different conditions that the two cancel each other out and the overall death count stays the same.

Professor Heneghan told The Telegraph: ‘Unless there is a significant increase in non-Covid deaths then next Tuesday the ONS report for the week ending February 26 should be back to somewhere near normal for this time of year.’

ONS figures published this week showed there were almost 14,000 excess deaths in England and Wales during the week ending February 19. This was 18.8 per cent above the five-year average – the equivalent of around 2,100 deaths.

Covid was to blame for around 4,000 deaths during the same week. 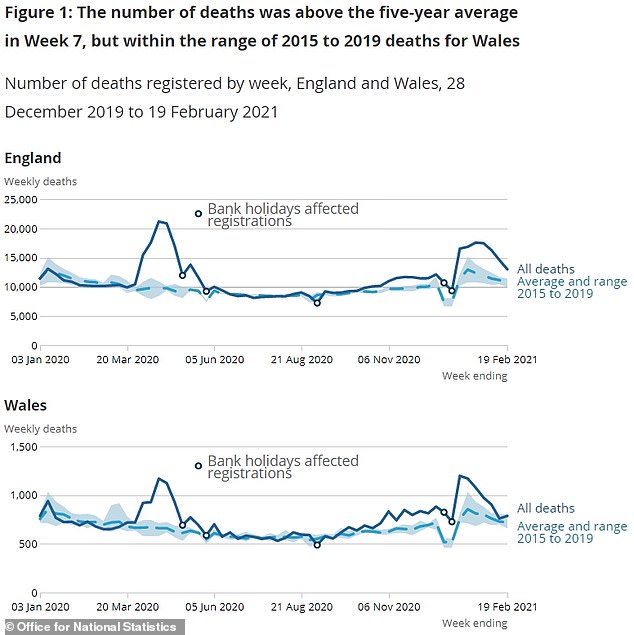 Deaths from all causes remained above the five-year average, in the most recent week (solid blue line, compared to dotted line), but they are almost back to average levels 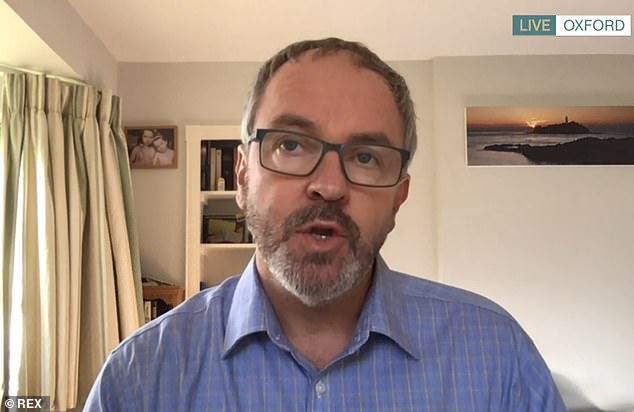 Professor Carl Heneghan, a doctor and evidence-based medicine expert at the University of Oxford, said he expects the number of deaths of all causes – including Covid – to be back to average already

How 12 times more people are dying from cancer than Covid