Country crooner Eric Church has shared his love for his home state of North Carolina both in his music and in interviews over the years, including his beloved North Carolina Tar Heels basketball team.

And with UNC set to face off against rival Duke in the Final Four of the men’s NCAA tournament for the first time this weekend, Church proved his devotion by canceling a sold-out concert in order to catch Saturday’s big game.

The singer, 44, was slated to perform for an audience of thousands at the AT&T Center in San Antonio, Texas, but an email was sent out to ticket-holders on Wednesday informing them of the cancelation. 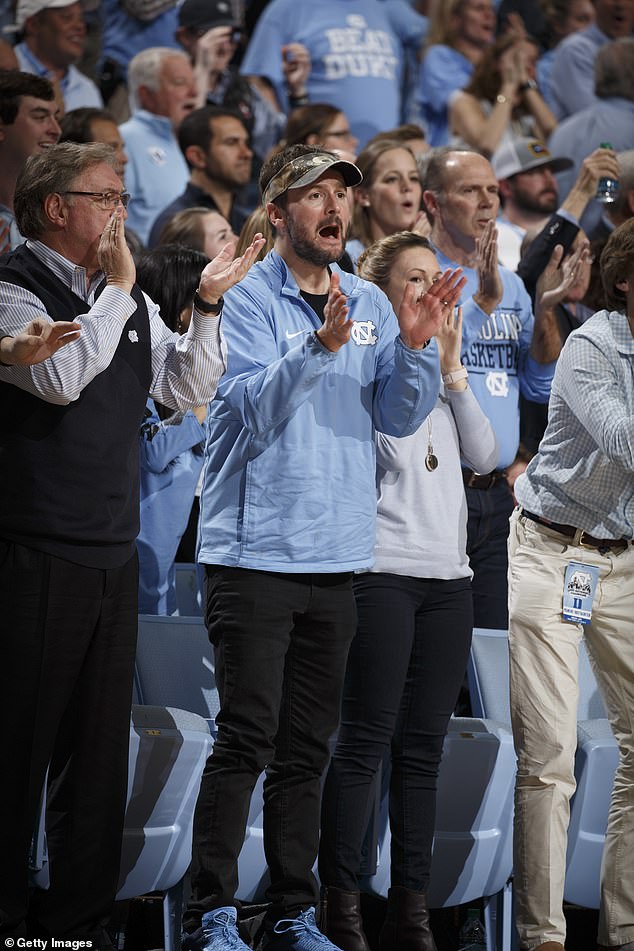 Controversial: Country music star Eric Church announced he was canceling his sold out show in San Antonio, Texas on Saturday so he could watch his beloved North Carolina Tar Heel face off against the Duke Blue Devils in one of the two Final Four NCAA men’s tournament games

Church would call his decision to cancel his sold out show at AT&T Center in San Antonio on Saturday the ‘the most selfish thing’ he’s ever asked of his fans to do.

But still, in a message via Ticketmaster, to his fans, dubbed the Church Choir, the North Carolina native made his case, imploring them to understand his decision and why the game means so much to him.

‘This Saturday, my family and I are going to stand together to cheer on the Tar Heels as the team has made it to the Final Four, Church’s message to his “Church Choir” fans began, as reported by ABC 11 in North Carolina.

‘As a lifelong Carolina basketball fan, I’ve watched Carolina and Duke battle over the years but to have them matchup in the Final Four for the first time in history of the NCAA Tournament is any sports enthusiast’s dream.’ 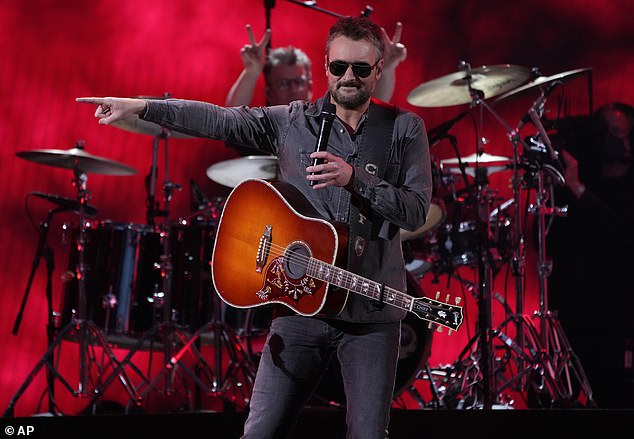 Backlash: The North Carolina native, 44, made his case for the cancelation in a statement via Ticketmaster to his so-called Church Choir fans, which hasn’t gone over too well with some

The star continued, ‘This is also the most selfish thing I’ve ever asked the Choir to do: to give up your Saturday night plans with us so that I can have this moment with my family and sports community.’

He proceeded to compare his passion for UNC basketball to the passion felt by his fans ‘who fill the seats at our concerts’, and how it’s driven him to ‘want to be part of a crowd at a game of this significance.’

He ended by quoting Woody Durham, the play by play announcer for the North Carolina Tar Heels football and basketball programs from 1971 to 2011: ‘Go where you go and do what you do.’ [T]hanks for letting me go here and be with the Tar Heels.’ 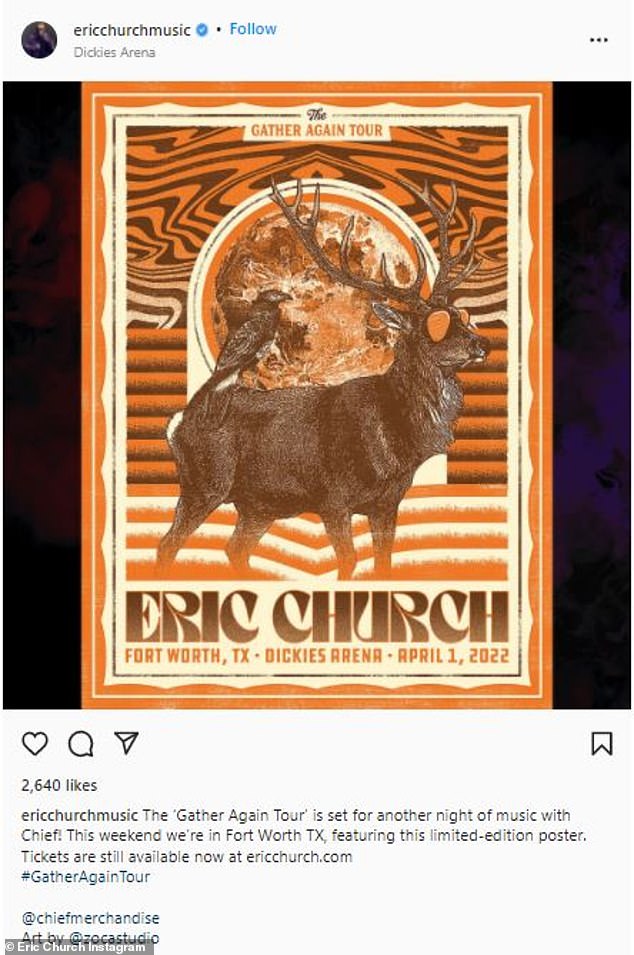 Fans venting: Many fans shared their opinions about the cancelation on the Carolina star’s social media platforms, including an Instagram post he made on Wednesday promoting his concert in Fort Worth, Texas on Friday

Later on Wednesday, Church took to Instagram to promote his upcoming concert on Friday in Fort Worth, Texas.

‘The Gather Again Tour is set for another night of music with Chief! This weekend we’re in Fort Worth TX, featuring this limited-edition poster. Tickets are still available now at ericchurch.com,’ he wrote in the caption.

While some fans understood his reasoning and could relate to his passion for all things UNC basketball, there were many others who were not so understanding, and have since besieged his social media platforms to vent their frustration, which included his Instagram page.

Backlash: Many fans shared their disgust with Church canceling the show

Backlash: There were some people who used other event’s as a way to make a point

Backlash: Some fans questioned Church’s loyalty to his fans

One fan wrote, ‘Hope he shows up for the fans,’ in a reference to Friday’s concert.

‘Better hope there’s not a bass fishing tournament in North Carolina first. He might want to go to that,’ another person shared.

One man questioned Church’s loyalty to his fans by writing, ‘Pretty sorry that you canceled a whole show just for some basketball game. Always thought you were for the fans.’

A few people kept it short but to the point and commented, ‘Lol Fort Worth doesn’t want you around sorry.’

Backlash: A few people kept it short but to the point

Supportive: Church did have some supporters who told angry people ‘to get over it’

Supportive: And then some supporters understood Church’s UNC fandom

There were some people who thought fans were taking their frustration a bit too far, commenting, ‘LMAO Y’all need to get over it! I would’ve done the exact same thing!’

And then there were those who completely understood Church’s decision and love for the Tar Heels: ‘Who cares about San Antonio. The Heels matter more #BeatDook and #GOHEELS.’

The winner of the UNC Tar Heels and Duke Blue Devils game will face off for the national championship against the winner of other Final Four Game: Villanova vs. Kansas. 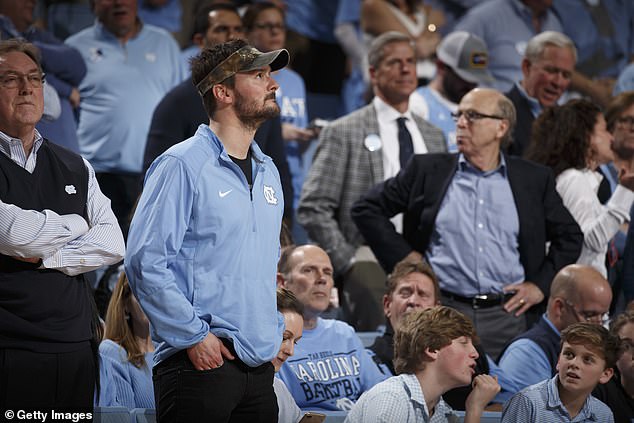 ‘Tar Heels devotion: As a lifelong Carolina basketball fan, I’ve watched Carolina and Duke battle over the years but to have them matchup in the Final Four for the first time in history of the NCAA Tournament is any sports enthusiast’s dream,’ Church said in his statement to fans, before confessing his decision ‘is the most selfish thing’ he’s ever asked of his fans to do