Covid came from a Wuhan lab… but scientists were too scared to say! Leaked emails exposed

The shocking claims were never brought to the public as scientists were in fear that the news would damage the reputation of science in China. Top British and American scientists who discussed the idea believe that it is highly likely that the coronavirus that led to Covid was accidentally leaked from a laboratory in the Chinese city. An email from Sir Jeremy Farrar, director of the Wellcome Trust, on February 2, 2020 said that “a likely explanation” was that Covid had rapidly evolved from a Sars-like virus inside human tissue in a low-security lab.

The email, to Dr Anthony Fauci and Dr Francis Collins of the US National Institutes of Health, went on to say that such evolution may have “accidentally created a virus primed for rapid transmission between humans”.

But a leading scientist told Sir Jeremy that “further debate would do unnecessary harm to science in general and science in China in particular”.

Dr Collins, the former director of the US National Institutes of Health, warned it could damage “international harmony”.

Viscount Ridley, co-author of Viral: the search for the origin of Covid, said: “These emails show a lamentable lack of openness and transparency among Western scientists who appear to have been more interested in shutting down a hypothesis they thought was very plausible, for political reasons.” 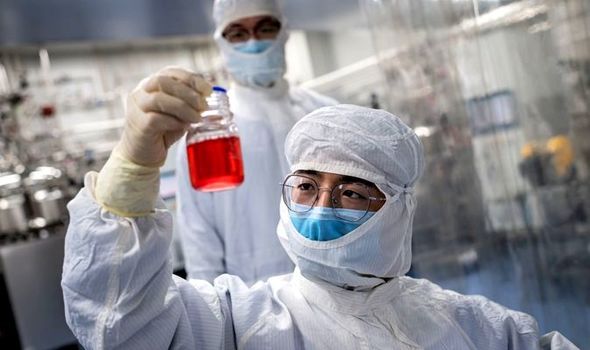 Much speculation has emerged over the origin of the virus (Image: Getty)

Many suggest the Wuhan Institute of Virology is the origin of the virus (Image: Getty)

In the emails, Sir Jeremy said that other scientists also believed the virus could not have evolved naturally.

One such scientist was Professor Mike Farzan, of Scripps Research, the expert who discovered how the original Sars virus binds to human cells.

Scientists were particularly concerned by a part of COVID-19 called the furin cleavage site, a section of the spike protein which helps it enter cells and makes it so infectious to humans.

Summarising Professor Farzan’s concerns in an email, Sir Jeremy said: “He is bothered by the furin site and has a hard time (to) explain that as an event outside the lab, though there are possible ways in nature it is highly unlikely.”

He added: “I think this becomes a question of how do you put all this together, whether you believe in this series of coincidences, what you know of the lab in Wuhan, how much could be in nature – accidental release or natural event? I am 70:30 or 60:40.”

Scientists did not want to harm the reputation of Chinese science (Image: Getty)

Later emails showed that by February 4, Sir Jeremy had revised his estimate of a laboratory leak to 50:50, while Professor Eddie Holmes, of the University of Sydney, gave a 60:40 estimate in favour of an accidental release.

The emails also show that Bob Garry, of the University of Texas, was unconvinced that COVID-19 emerged naturally.

He said: “I just can’t figure out how this gets accomplished in nature.”

Professor Andrew Rambaut, from the University of Edinburgh, also said that the furin cleavage site “strikes me as unusual”.

He added: “I think the only people with sufficient information or access to samples to address it would be the teams working in Wuhan.”

Further emails show that by February 2, 2020, scientists were already trying to shut down the debate into the laboratory leak theory.

An email from Dr Ron Fouchier to Sir Jeremy said: “Further debate about such accusations would unnecessarily distract top researchers from their active duties and do unnecessary harm to science in general and science in China in particular.”

Dr Collins, former director of the NIH, replied to Sir Jeremy stating: “I share your view that a swift convening of experts in a confidence-inspiring framework is needed or the voices of conspiracy will quickly dominate, doing great potential harm to science and international harmony.”

Institutions that held the emails have repeatedly resisted efforts to publish their content.

The University of Edinburgh recently turned down a Freedom of Information request from The Telegraph asking to see Prof Rambaut’s replies, claiming “disclosure would be likely to endanger the physical or mental health and safety of individuals”.

A US intelligence review suggested that the COVID-19 virus did originate from China.

However, Beijing has vehemently denied the report.

China deny the virus was leaked from the Wuhan lab (Image: Getty)

Foreign ministry spokesperson Wang Wenbin said in a statement that China had expressed firm opposition to initial findings published in the summary report in August.

Mr Wenbin said: “No matter how many times this report is published and how many versions are concocted, it cannot change the nature of this being entirely political and false.”

He added that the fact intelligence agencies were tapped in origin-tracing efforts was “ironclad proof” of politicisation, and urged the US to “stop attacking and smearing China”.

In August, US President Joe Biden said China was withholding critical information on the origins of COVID-19, adding that Chinese officials had worked to prevent access for international investigators.

Although Mr Biden’s review was launched while the lab-leak theory gained momentum, the report noted that most agencies believed the virus was not genetically engineered.