London’s Covid outbreak may no longer be shrinking, according to official data which has prompted scientists to warn that the worst of the Omicron crisis may not be over yet.

Infections in the capital have risen in under-60s as a whole since New Year’s Eve, with rates highest among adults in their 20s and 30s. Top experts fear they will likely keep creeping up because children have now gone back to school, giving the virus more opportunities to spread.

Simultaneously, cases appear to be dropping among the over-60s in a hopeful sign pressure could ease further on the NHS, with London’s hospitals already seeing a downturn in admissions.

But it’s not yet clear whether either trend is genuine or simply due to changes in the number of tests being carried out, with the proportion of people now swabbing positive for the coronavirus having fallen for the first time since Omicron took off.

Academics today warned that cases would inevitably rise in over-60s if the outbreak is generally growing among younger adults, warning that the true trajectory won’t become clear for another week or so.

Despite warning signs that the capital’s outbreak may not have peaked, London’s senior health official yesterday argued that outbreak peaked over the New Year period. Separate Covid surveillance data warned up to one in 10 Londoners were infected on New Year’s Eve.

Yesterday London recorded 16,493 cases, its lowest tally since mid-December. Its hospitalisations are also falling after peaking at half the level of last winter’s crisis.

But the numbers of critically ill patients has barely risen throughout the Omicron wave, which has given ministers confidence to stick to their ‘ride it out’ plan. Deaths are also flat and the mortality rate is dropping because of the ultra-infectious variant, experts say.

Nationally, Covid cases have fallen week-on-week over the last four days. But they are now highest in the North West and North East, in a sign these regions could soon face heavier pressures. 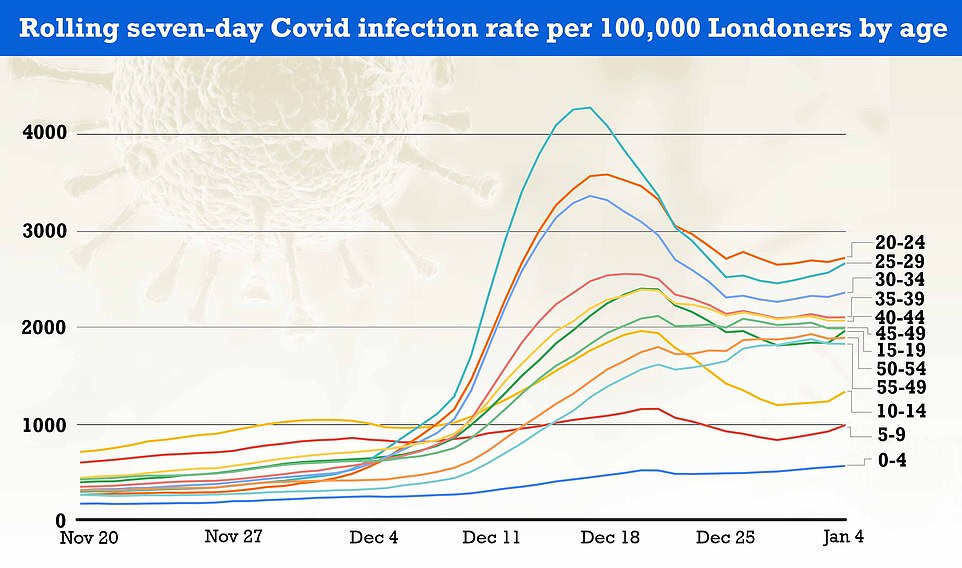 The above graph shows infection rates in under-60s in London since late November. It reveals that while rates are highest in 20 to 35-year-olds, there has recently been an uptick among children and their parents 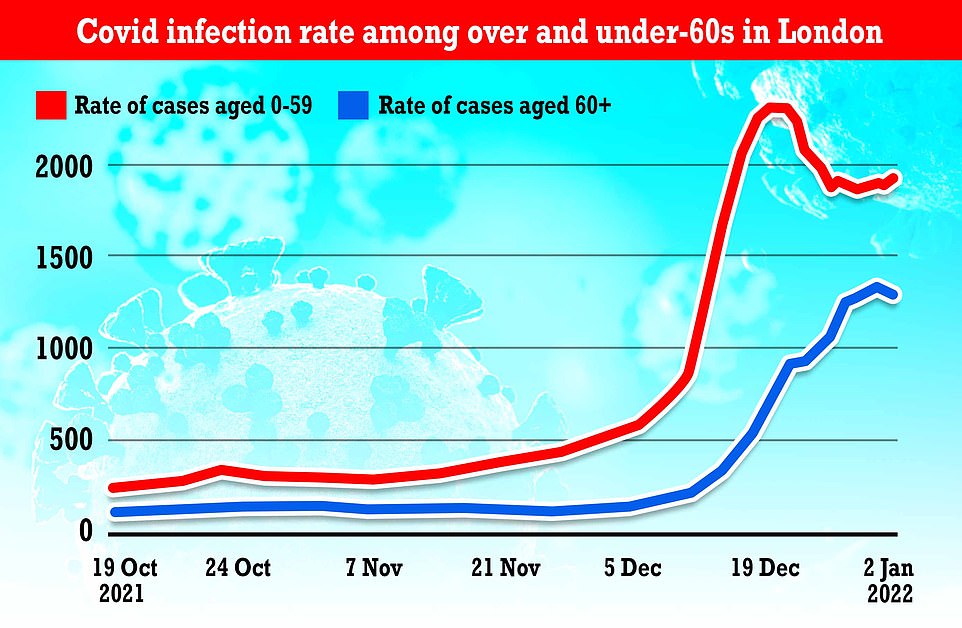 The above graph shows Covid cases among over-60s and under-60s in London. Cases have now plateaued in the younger age group in a sign that the worst of London’s Omicron crisis may not be over 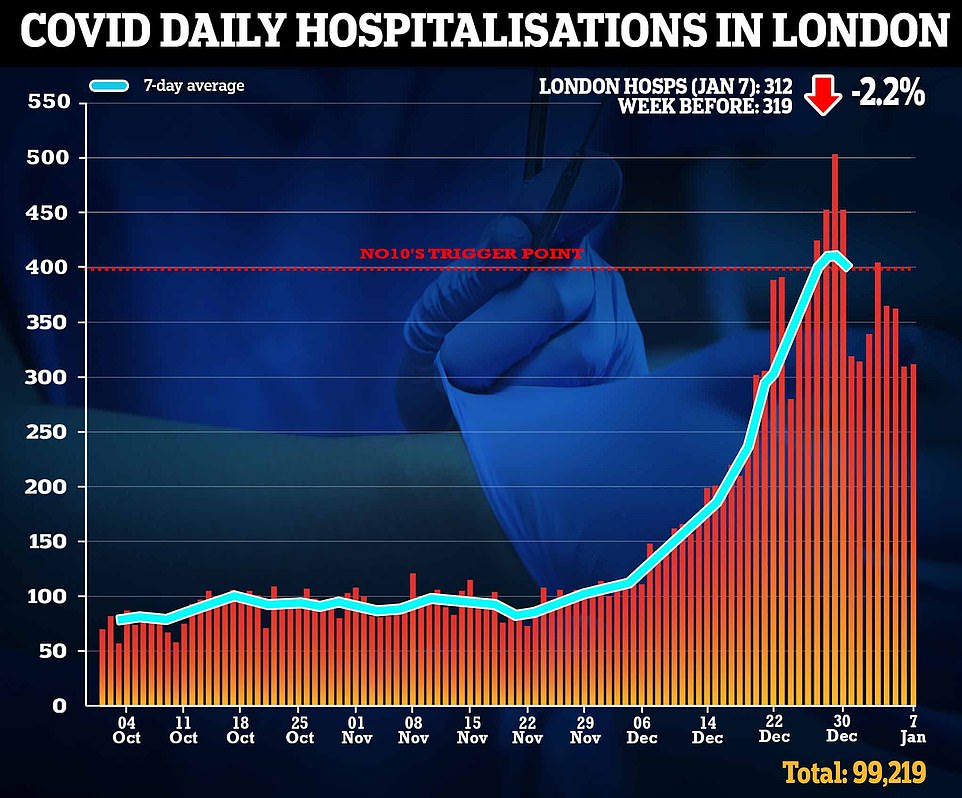 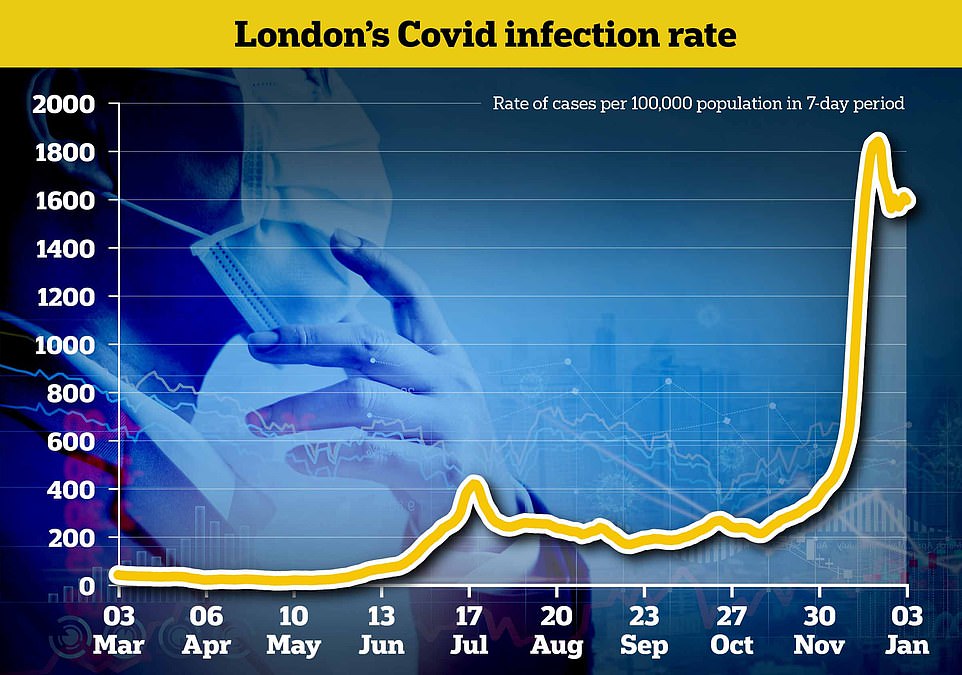 Department of Health data showed cases had risen 2.2 per cent in a week among under-60s as a whole in London, illustrating a change in trajectory.

But young children and adults in their 50s saw the biggest percentage rise in cases over the latest week figures are available for.

Catching a common cold may protect you from getting Covid, another study finds

Catching the common cold could also protect against Covid, yet more research has suggested.

Ever since the start of the pandemic, experts have speculated other coronaviruses — which tend to cause runny noses and sore throats — could offer some cross-reactive immunity.

But new real-world evidence has uncovered the ‘clearest evidence’ yet that immunity induced by colds can help fight off Covid.

People with higher levels of T cells from other seasonal coronaviruses were less likely to get infected with SARS-CoV-2, the virus that causes Covid.

T cells are a key part of the immune system, and hunt down invading pathogens and stop them replicating within the body.

Imperial College London scientists studied 52 people who lived with someone who had tested positive for the virus. Half caught the virus, while the others managed to ward it off.

They took blood samples from the volunteers within days of being exposed to SARS-CoV-2, allowing researchers to determine their T cell levels.

Household contacts who did not test positive had ‘significantly higher levels’ of pre-existing coronavirus-fighting T cells, on average.

These T cells ‘targeted internal proteins within the SARS-CoV-2 virus rather than the spike protein to protect against infection’, the team said.

Professor Ajit Lalvani, one of the researchers, said: ‘Our study provides the clearest evidence to date that T cells induced by common cold coronaviruses play a protective role against SARS-CoV-2 infection.’

But experts warned people cannot rely on having had the common cold alone as protection against Covid and getting triple-jabbed remains ‘the best way to protect yourself’.

Experts said more tests may be behind the rise in younger age groups, after some schools returned on January 4, but that it was still too early to tell.

Some 191,000 swabs were carried out in London on January 4, the most since March last year, but it is unclear how many of them were done for children returning to school.

There were also signs that cases among over-60s were dropping.

But he told MailOnline a clearer image will only emerge ‘next week’ when the ‘usual mixing for work and school return to pre-Christmas levels’.

Professor Paul Hunter, an infectious diseases expert at the University of East Anglia, said the rise in cases in younger age groups could be down to more swabs being done.

He told MailOnline: ‘It’s plausible that the plateau in cases in the under-60s is because of increased testing as people go back to work and so on, [rather than an actual surge], but we will need to give it a week or two to be sure.’

Asked whether cases in over-60s had peaked, Professor Hunter told MailOnline: ‘It is possible. Based on the last day or so of data it does seem to have fallen in London in that age group.

‘[But] we will need to give it a week or so until we’ve got rid of the holidays impact…. for it to be a bit more obvious what’s going on.’

He warned: ‘If cases in the under-60s rise they will rise in the over-60s because they generally get it from under-60s, not each other, except during outbreaks which are not occurring right now.’

Eminent statistician at Cambridge University, Sir David Spiegelhalter, also said it was too early to be certain whether cases had peaked in older adults in the capital.

He told MailOnline: ‘It’s still too soon to say with older people.’

Experts said yesterday the Omicron wave in London likely peaked over the New Year period, with Professor Fenton telling Sky News: ‘We think we may have passed or are at the peak.

‘Data from the ONS [Office for National Statistics] suggests that the peak may have occurred at or just about the New Year period and we’re seeing reductions in overall case rates across the city and the prevalence of infections within the community.’

‘[But] remember that infection levels are still very, very high… It means that we’re not yet out of this critical phase of the pandemic, although we may well be past the peak.’ 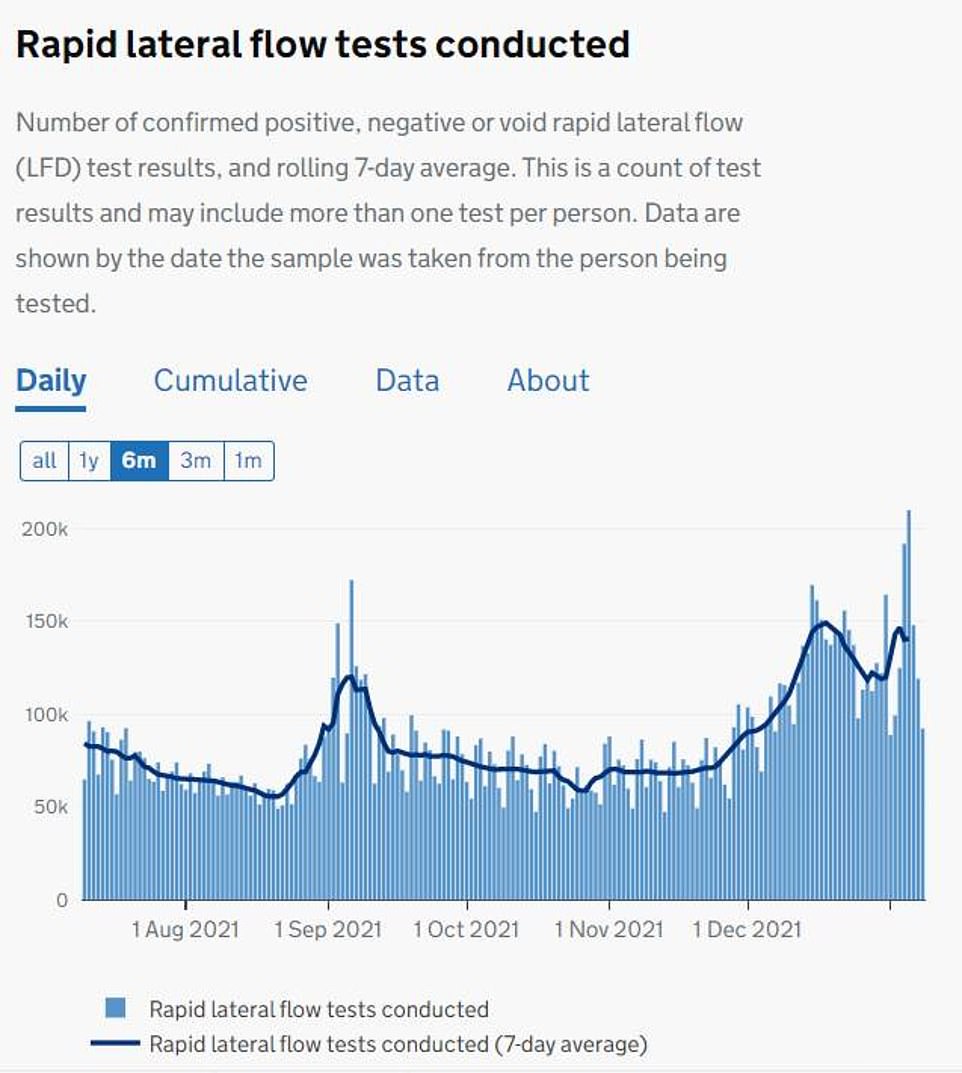 The above shows the number of lateral flow tests carried out every day in London. It reveals big spikes in swabbing on January 4 and 5 (right), when schools began to return from the summer holidays 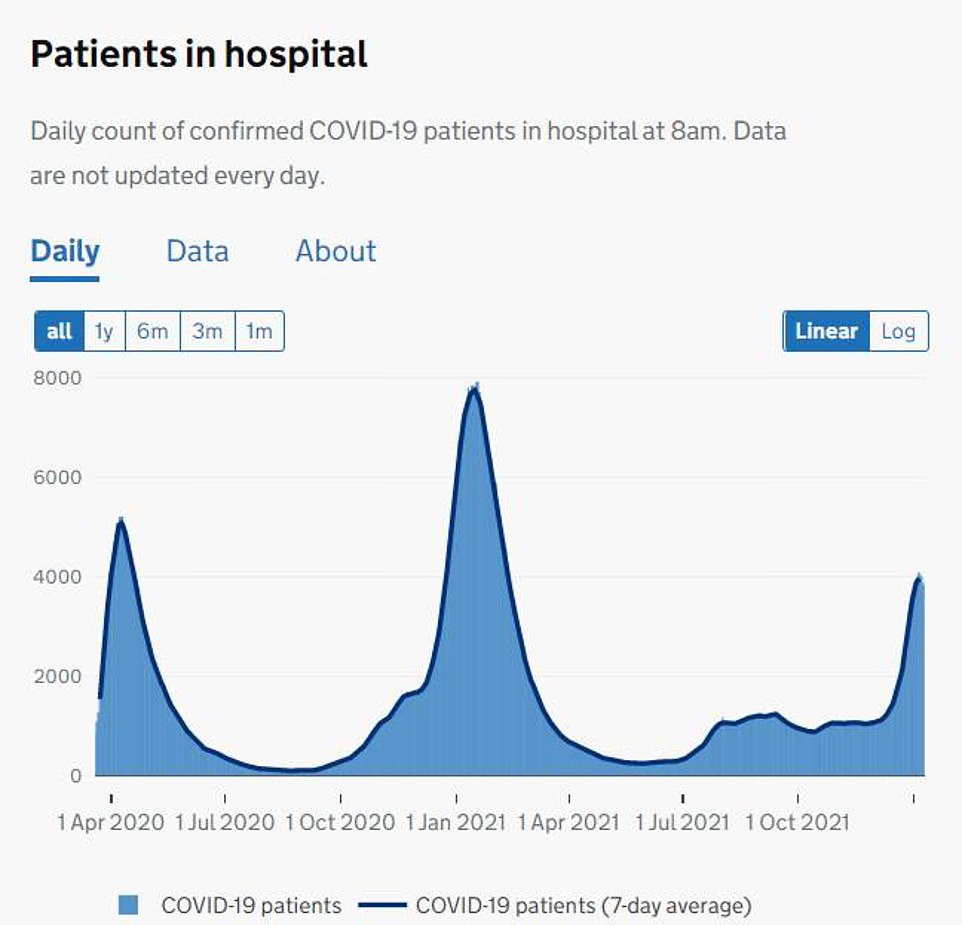 The above shows  the number of Covid patients in hospitals in the capital. It reveals that they may now be plateauing at around half the levels of the previous wave 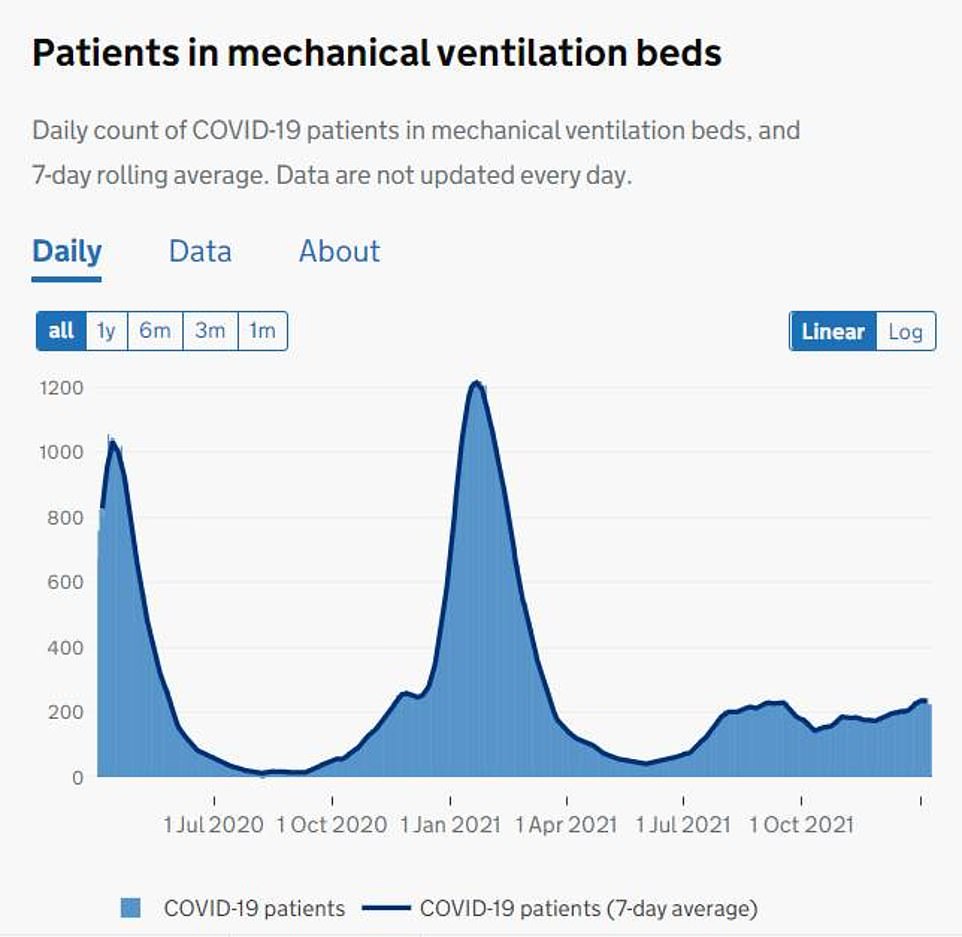 The above shows the number of patients on mechanical ventilators in London. This has barely risen since Omicron arrived 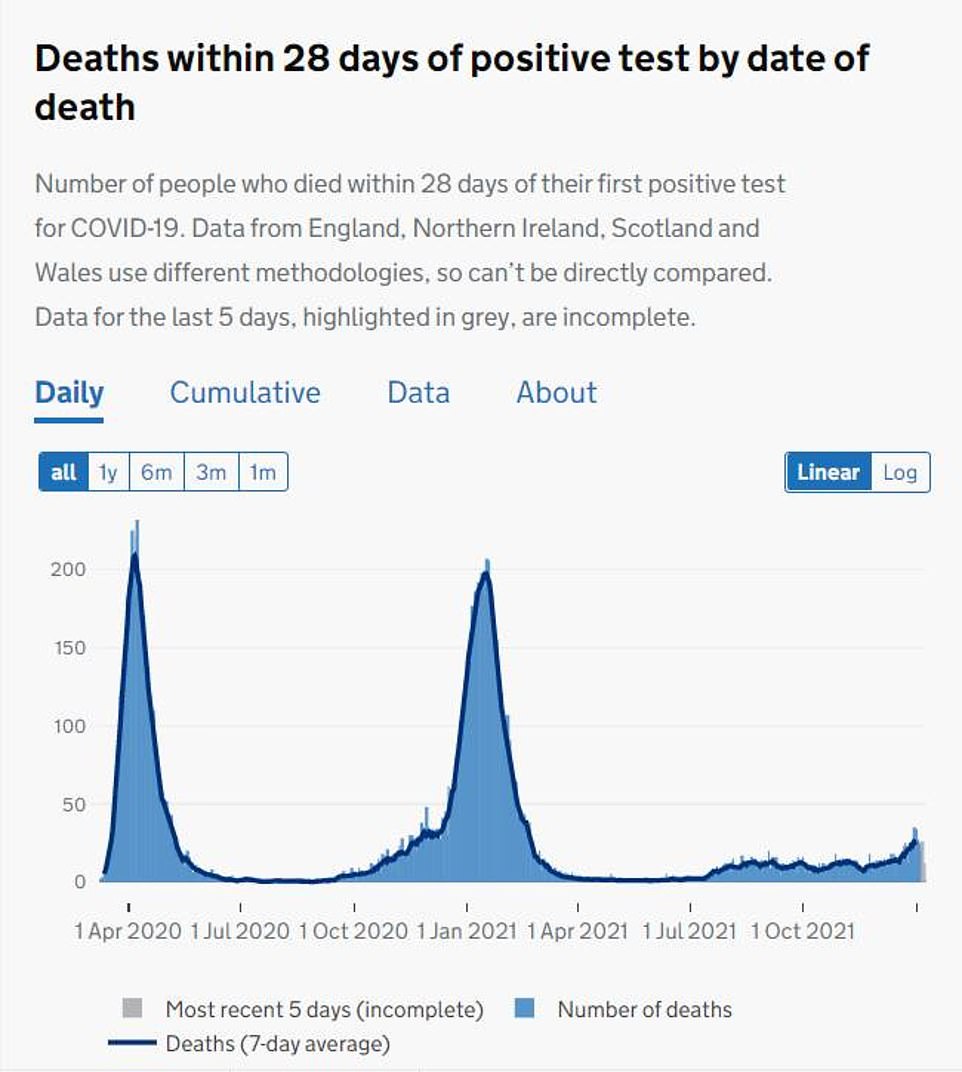 This chart show the number of Covid deaths recorded in the capital. It is now rising

Boris Johnson today hailed ‘great progress’ against Omicron and said the government is ‘looking at’ cutting the self-isolation period again as ministers insisted Britain is on a path to ‘living with Covid’.

The PM argued that efforts to ‘see off’ the latest variant were working amid signs the brutal wave is already slowing down – but warned that the NHS is still under significant pressure and urged people to get booster jabs.

On a visit to a vaccination clinic in Uxbridge, he poured cold water on rumours that lateral flow tests could stop being free soon, saying they will stay ‘as long as necessary’.

And he tempered his optimism by stressing that ministers will follow the ‘science’ on whether quarantine can be cut again from seven days without causing another deadly spike in infections.

The government and NHS leaders appear increasingly confident that the Omicron wave will not overwhelm services.

White House to EXPAND use of Pfizer antiviral drug Paxlovid