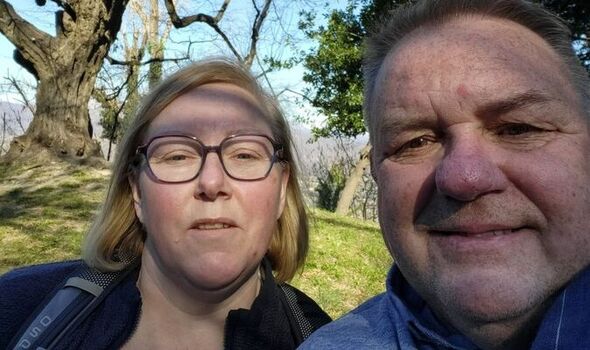 David Chadwick was excited for his romantic getaway with wife, Alison, 46, but when he arrived at Zagreb Airport, in Croatia, he was stopped by border guards. When boarding the Ryanair flight at Manchester Airport, David somehow managed to use his 21-year-old stepdaughter’s passport instead of his own.

As David did not possess any other form of identification, he was kept in a cell at the airport for the entirety of the holiday, reports The Liverpool Echo.

He was then escorted onto his original flight home and greeted by border officials at Manchester Airport who confirmed his identification based on photos of his passport and driving licence on his phone and let him go home.

Senior international clinical manager David, who lives in Standish, with wife Alison and stepdaughter Katherine, who are both nurses, said: “I was simply gutted, and embarrassed at the same time.

“I pride myself in never having the wrong things in hand luggage and always having the correct documentation, so I couldn’t believe it had happened. I think our faces said it all.

“I accept it’s half my fault for picking up the wrong passport,but you’d think that, post 9/11, I wouldn’t have been able to board a plane with a female name and photo of my daughter on!

“When I finally got back to the UK, the border force at Manchester Airport couldn’t believe I got to Croatia with the wrong passport.

“The most perplexed was the Zagreb UK consulate as to how I’d managed to get to Croatia in the first place.

“This was a much-needed break for both of us – my wife is an NHS nurse who worked all the way through the pandemic whilst I worked in clinical research – but I spent the whole time in a cell. It was gutting.”

Both David and Alison had been looking forward to their romantic five-day break together after both working tirelessly throughout the pandemic.

Opening the drawer of the coffee table in their living room on the morning of their flight on April 24, David had grabbed the two passports inside without checking them.

He did not realise at the time that he had picked up his stepdaughter’s passport instead of his own, which was still in his laptop bag from a work trip two weeks prior.

David had to stay in a small cell for his entire holiday at Zagreb Airport whilst Alison lived in the Airbnb apartment they had booked for their trip before the airport disaster.

David said: “The police officer in Zagreb was really nice – he tried to get us straight back on a flight home when he realised the mistake but, as you can imagine, no other airline would take me without a valid passport.

“He had to break the news to Alison that she would have to enter Croatia alone as he needed to lock me up.

“I was locked up on the Sunday and he was nice enough to let me out of my cell for five minutes when he was next on duty on the Tuesday, and then I was released on the Thursday and sent home.

“The owner of the Airbnb apartment we rented was utterly brilliant too – she waited for Alison to arrive, then stayed and had a drink with her to calm her nerves. She also phoned her everyday to check she was alright.”

The unfortunate dad claims Ryanair didn’t help him after he requested help from his cell and he has not heard from the airline since finally returning home on April 28.

The Foreign Office had spoken to the police in Zagreb on his behalf to try and secure emergency documentation but, as David couldn’t enter the country, there was no way of him collecting the documents.

Now relieved to be home but saddened to have missed out on his much needed holiday, David said: “I’m extremely disappointed to not have seen what looked to be a beautiful country.

“I’m sad that my carelessness caused some people to be so worried about me, giving them more stress than they deserved.

“As you can imagine, the whole time I was detained, my wife held onto the notion that I may get released but she spent our five day holiday all on her own.

“Alison and I had to use WhatsApp voice notes and pictures to communicate – we couldn’t physically speak to each other as the one time we did, both of us got too upset to continue the conversation.

“[My stepdaughter] was so worried when we told her – her mum in a new country and her stepdad in a cell.

“It’s not the kind of pressure you’d ever want to put on a 21-year-old. I will definitely go back to Croatia in the future – the police officer and the owner of the Airbnb flat demonstrated how nice Croatian people are.

“I’ll just make sure I have the right passport next time!”

A spokesperson for Ryanair said: “This passenger was detained by Croatian authorities on arrival to Zagreb, following his flight from Manchester (24 Apr) for failing to travel with his own passport.

“It is each passenger’s responsibility to ensure they have a correct and valid passport for travel.