Dakota Johnson turns out yet another winning fashion ensemble

Another day, another winning fashion ensemble from Dakota Johnson.

The Fifty Shades of Grey star has been turning out look after look this week, following her appearance at fashion’s biggest night the Met Gala on Monday.

On Thursday evening, the 32-year-old was pictured leaving her hotels dressed in a chic pinstripe white blazer over a black top and matching flared trousers. 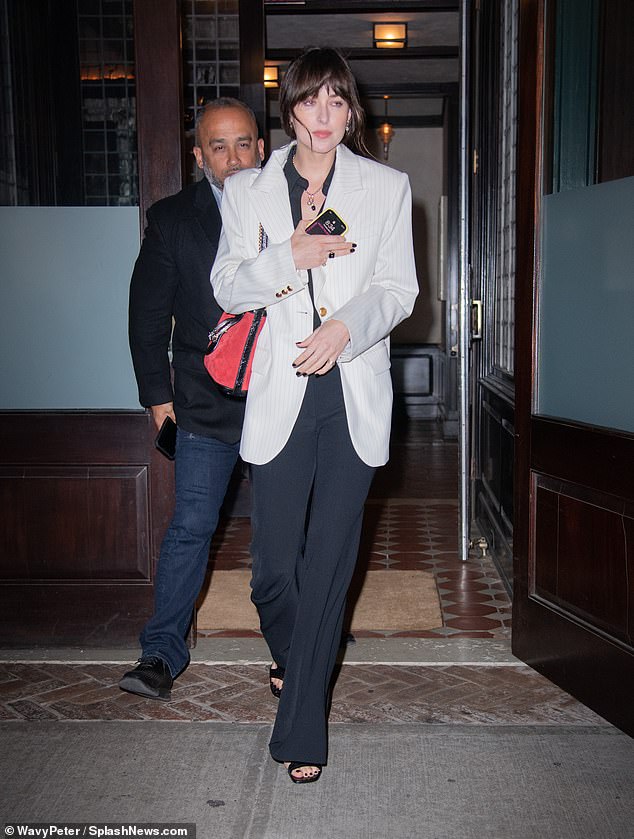 Effortless: Dakota Johnson turns out yet another winning fashion ensemble in stylish white pinstripe jacket as she leaves her hotel in NYC

The daughter of Melanie Griffith kept her brunette locks tied back, completing a casual yet stylish overall look.

Dakota was accompanied by security as she left the hotel solo.

She also showed off a designer red handbag and statement jewelry as she headed out for the evening. 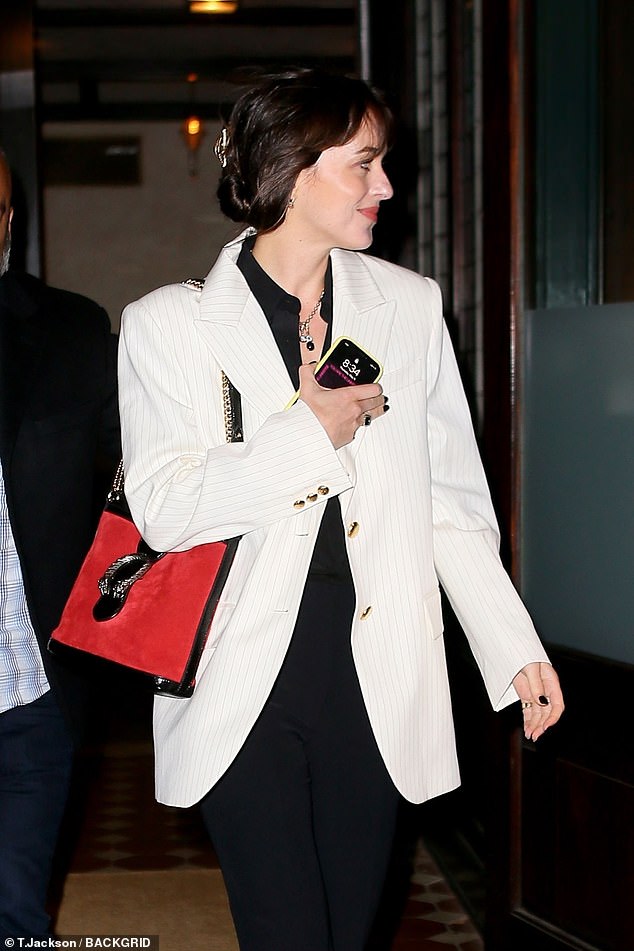 Style: She also showed off a designer red handbag and statement jewelry as she headed out for the evening

Johnson most recently attended the Met Gala, where she showcased her sensational figure in a see-through black jumpsuit designed by Alessandro Michele of Gucci.

Although she is in a longtime relationship with Coldplay heartthrob Chris Martin, 45, she attended the glittering event solo.

Her smoldering lace getup was dripping with shimmering metallic fringe that complemented her ornate drop earrings. 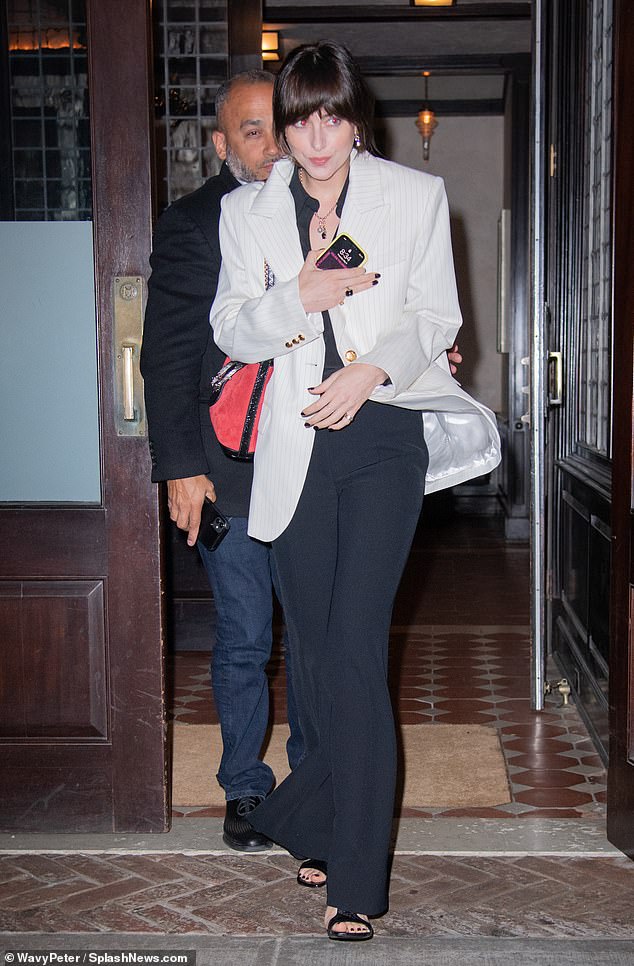 Here she comes: The Fifty Shades of Grey star was seen making a stylish exit out of her hotel 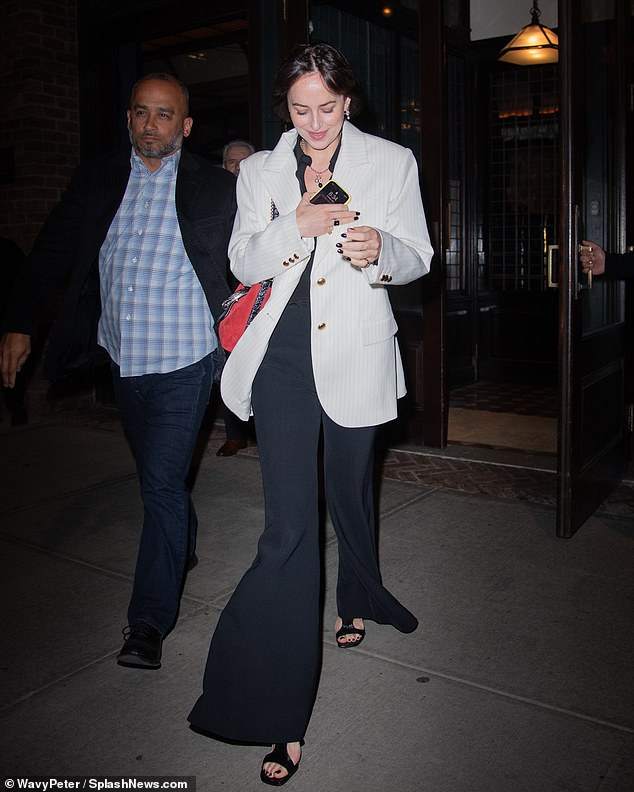 Fashion foot forward: She showed off her flared trousers as she went about her night

In terms of her acting career, after her successful role in Maggie Gyllenhaal’s The Lost Daughter in 2021, she will now be the star of Persuasion, a Netflix film based on Jane Austen’s novel of the same name.

The movie tells the story of Anne Elliot, a woman who does not want to conform to societal norms, when an ex love interest comes back into her life.

‘When Frederick Wentworth—the dashing one she once sent away—crashes back into her life, Anne must choose between putting the past behind her or listening to her heart when it comes to second chances,’ the log line reads.

Fans of the star won’t have to wait long to see her in the role, as Persuasion will be available to stream on Netflix on July 15. 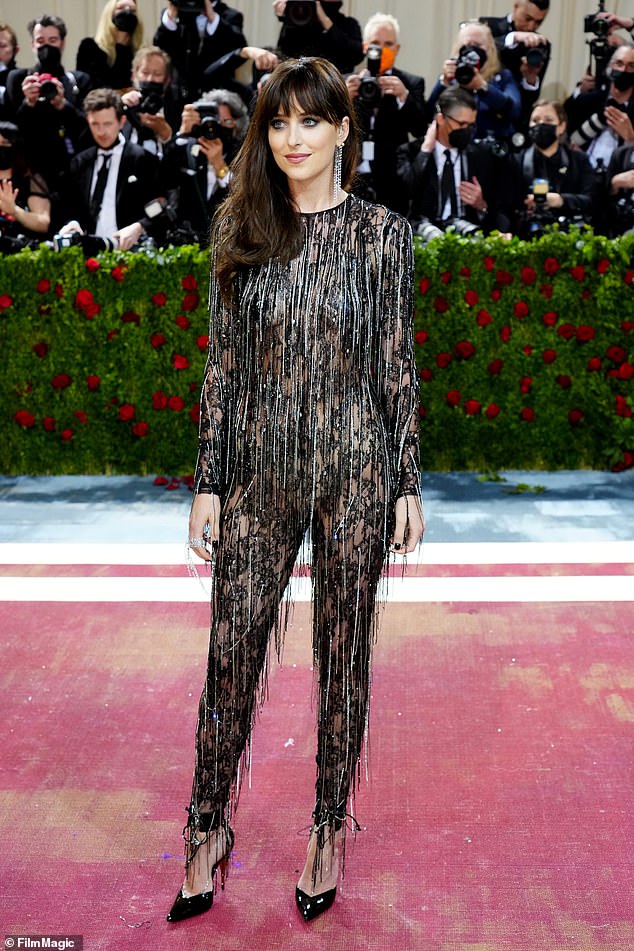