Dame Helen Mirren blends in with the home furnishings in her £3,650 Dolce & Gabbana dress

She was styled in a stunning array of Dolce & Gabbana dresses for the fashion house’s tenth anniversary of their haute couture line, Alta Moda.

But one of the ensembles from last weekend’s festivities in Sicily saw Dame Helen Mirren lost amid the home furnishings. 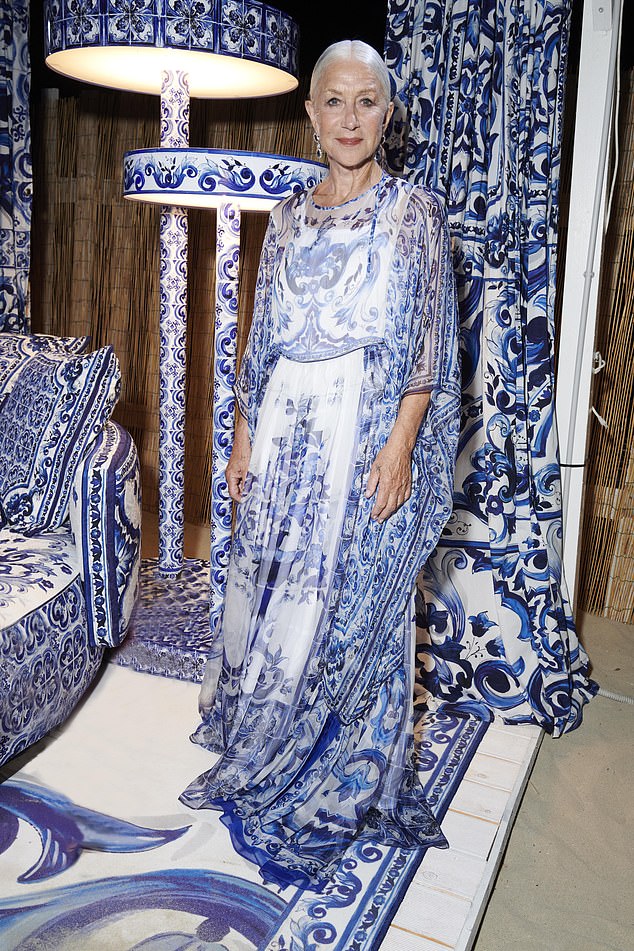 Matching Dame Helen Mirren was lost amid the home furnishings in a stunning blue and white, majolica-print chiffon dress designed by Dolce & Gabbana over the weekend

However, she blended in with the curtains, sofa and lampshades at the Piazza Duomo in Sicily, where she was celebrating the tenth anniversary of the Italian fashion house’s haute couture line.

Dame Helen, who played Her Majesty in The Queen, gushed of her weekend of dress-up: ‘A truly magical event.’

Dame Helen teamed up with Mariah Carey, 52, Drew Barrymore, 47 and Sharon Stone, 64 for the stunning shot, with the foursome looking resplendent in their D&G ensembles. 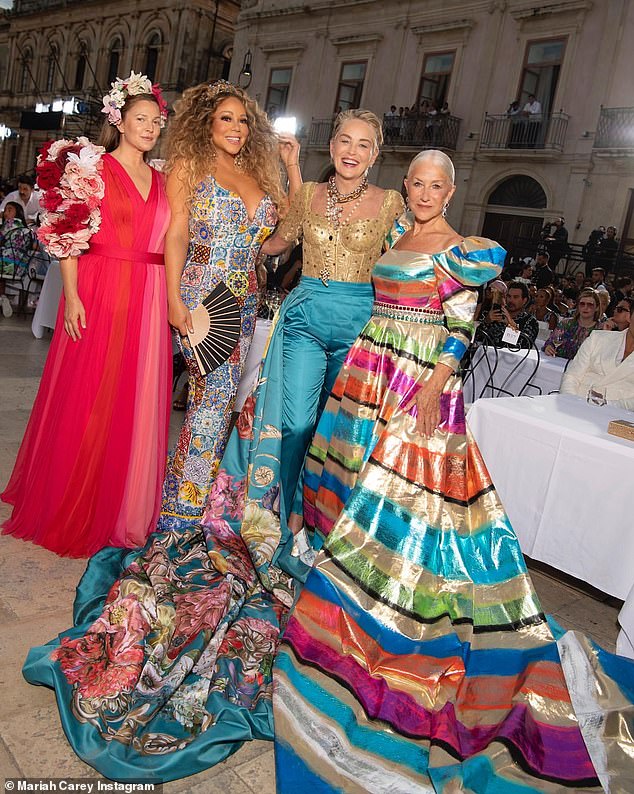 In the shot shared on Mariah’s Instagram, Dame Helen wowed in a metallic, rainbow gown with a dramatic skirt which fanned out in front of her.

She stood next to Sharon who teamed a pair of turquoise satin trousers which featured a floral train, with a racy gold corset-style top .

Mariah arrived in a skintight fishtail dress with a plunging neckline and a Majolica-inspired print, adding a gold crown in her curly locks.

Drew meanwhile looked incredible in a pink and red pleated gown with her sleeves festooned with roses and a floral headpiece to match. 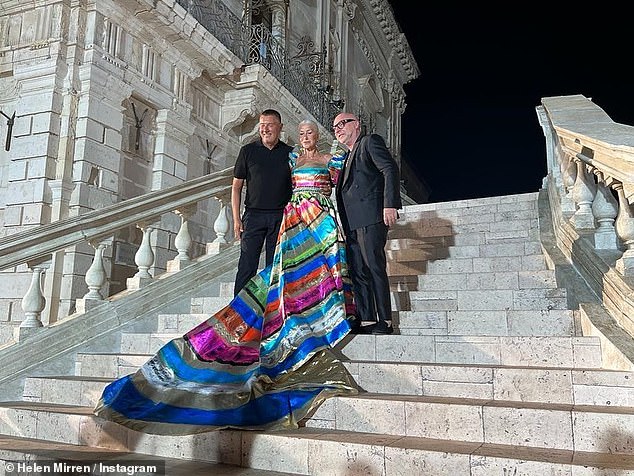 VIP: Dame Helen also wowed in a metallic, rainbow gown with a dramatic skirt which fanned out in front of her as she posed for Insta snaps with design duo Dolce & Gabbana 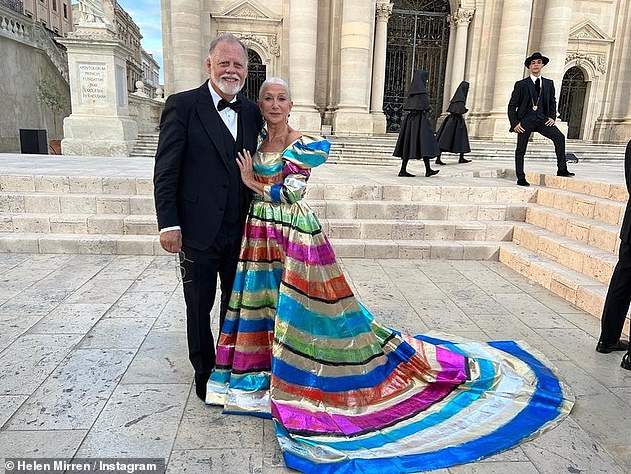 Date: She also appeared in a glam photo with her dapper husband Taylor Hackford

‘Siracusa is a special place for us,’ Gabbana explained before the show, as reported by the National News, adding, ‘It is in the most southern part of Sicily, in front of Africa. I love the feeling, I love the mood, I love the stones, the colors, the people.’

To help set up the mood, ahead of the Alta Moda presentation, there was a re-enactment of the classic Italian opera Cavalleria rusticana from the late 1800s by Pietro Mascagni that was performed on a catwalk set up in front of the famed cathedral.

The idea was to create an experience that was best representative of the Dolce & Gabba DNA. 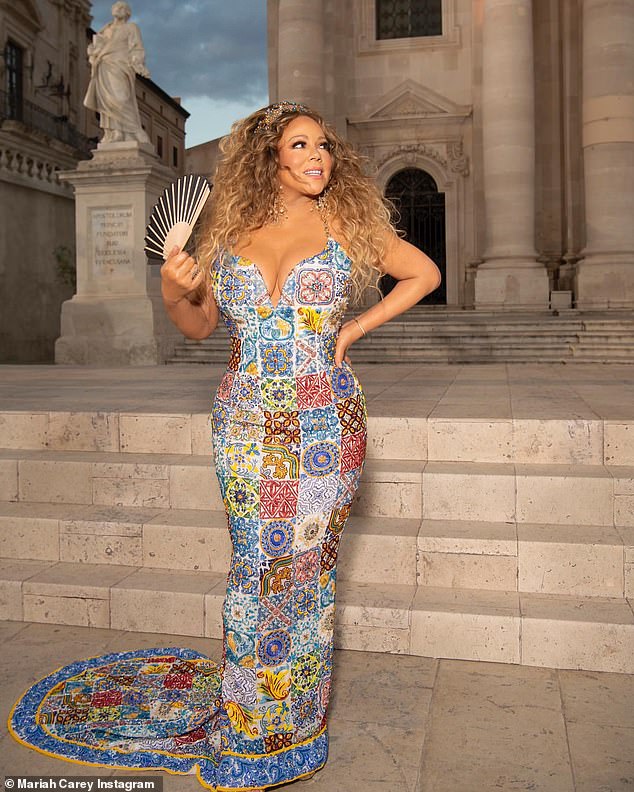 Queen: Mariah arrived in a skintight fishtail dress with a plunging neckline and a Majolica-inspired print, adding a gold crown in her curly locks

The new collection has been described as heartfelt love letter to the Sicilian woman, which has been part of the brand inspiration.

This time around there was a move away from its signature prints and vibrant colors, and replaced almost entirely with black pieces.

‘If you ask someone, in their imagination, what the Sicilian woman wears, it is black,’ said Gabbana.

In all, the new collection consists of 106, that were represented by the many models who first appeared at the top of a set of steps in front of the cathedral. 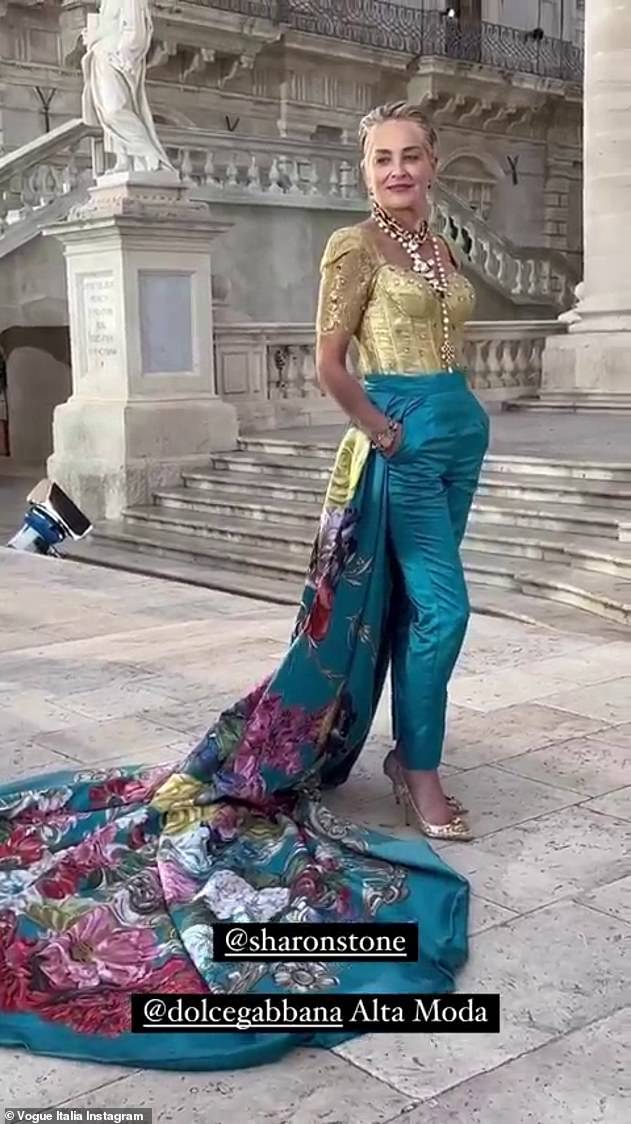 Gorgeous: Sharon teamed a pair of turquoise satin trousers which featured a floral train, with a racy gold corset-style top