‘Made the most amazing memories!’ Danielle Armstrong poses in a ‘bride’ jumper at the airport as she returns from her raucous Mykonos hen do

By Amelia Wynne For Mailonline

Danielle Armstrong finally returned from her raucous Mykonos hen do on Monday after a wild four days of partying.

The former TOWIE star, 34, posed at the airport for her latest Instagram snap wearing a white ‘bride’ jumper and held her passport.

She told in the caption how she had made the ‘most amazing memories’ with her friends including her fellow reality star Ferne McCann during the jam-packed trip. 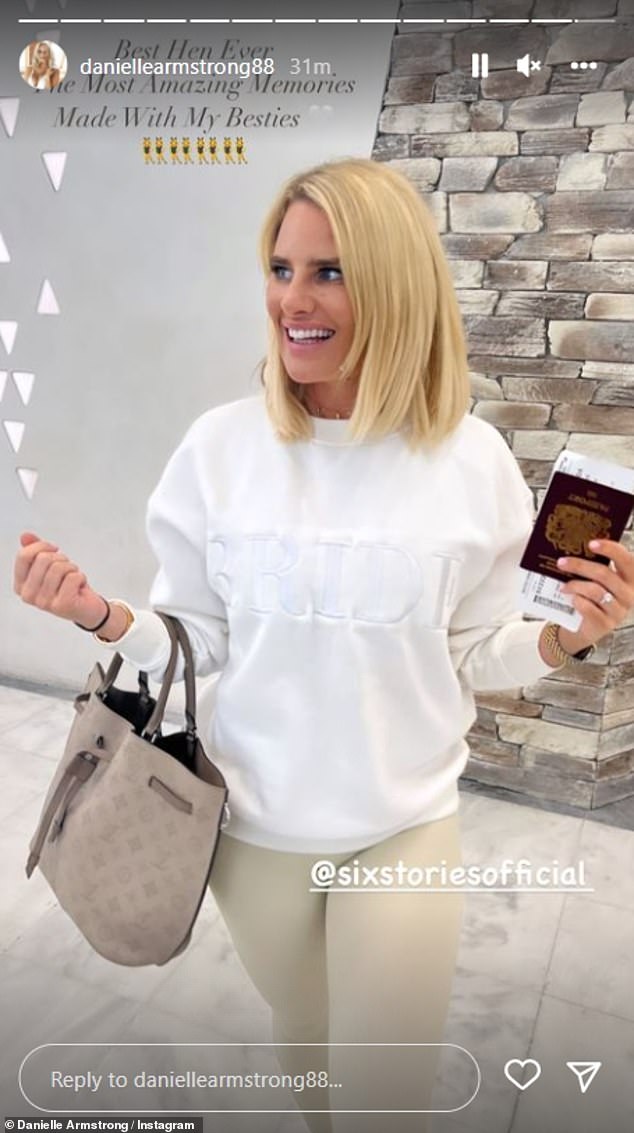 Back to reality: Danielle Armstrong finally returned from her raucous Mykonos hen do on Monday after a wild four days of partying

The star is set to wed her fiancé Tom Edney this summer after the pair welcomed their daughter Orla in May 2020.

Danielle looked chic in her airport snap as she wore her bride jumper which was teamed with cream leggings and she toted a matching Louis Vuitton bag.

She later said on her Story as she updated fans on her journey back to the UK: ‘Hi we are just delayed on the runway so I wanted to do a little message.

‘I have had the best weekend ever and I feel so blessed. It was everything I had wished it would be and now I’m just so excited to get back to my little Orla. 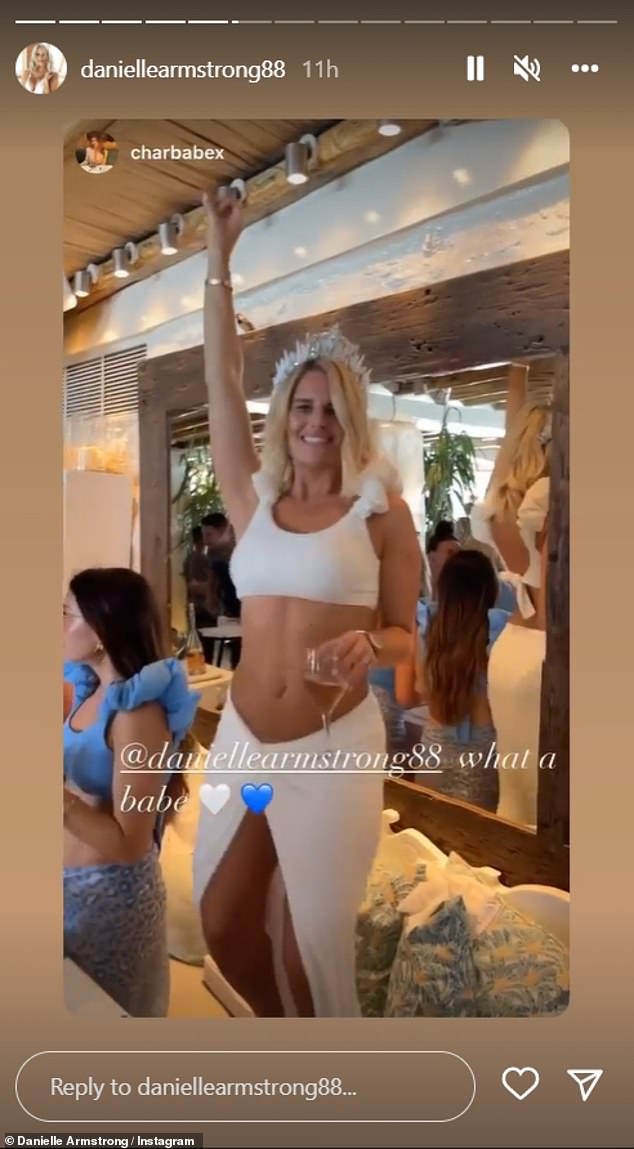 Fun times: Danielle has been partying the bank holiday away with her pals in Mykonos and has been documenting it all on social media 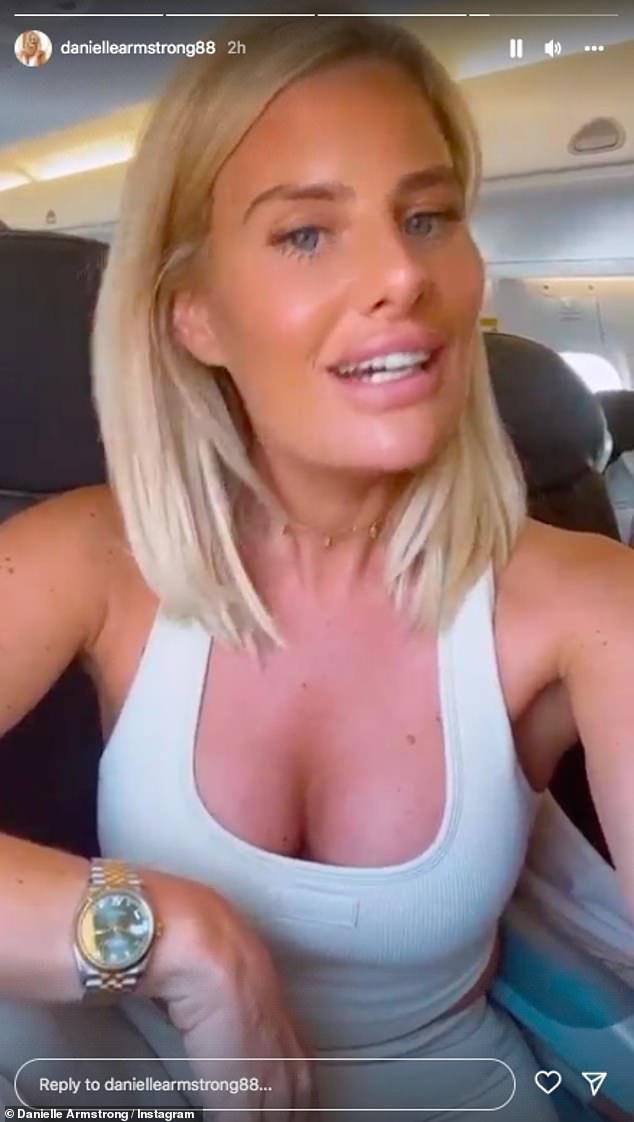 Happy: She later said on her Story as she updated fans on her journey back to the UK: ‘I have had the best weekend ever and I feel so blessed’

‘I am excited now to get back to my fiancé and back to work and get married.’

Danielle has been partying the bank holiday away with her pals in Mykonos and has been documenting it all on social media.

Ferne recently told MailOnline she was ‘really excited’ to become a bridesmaid once again. 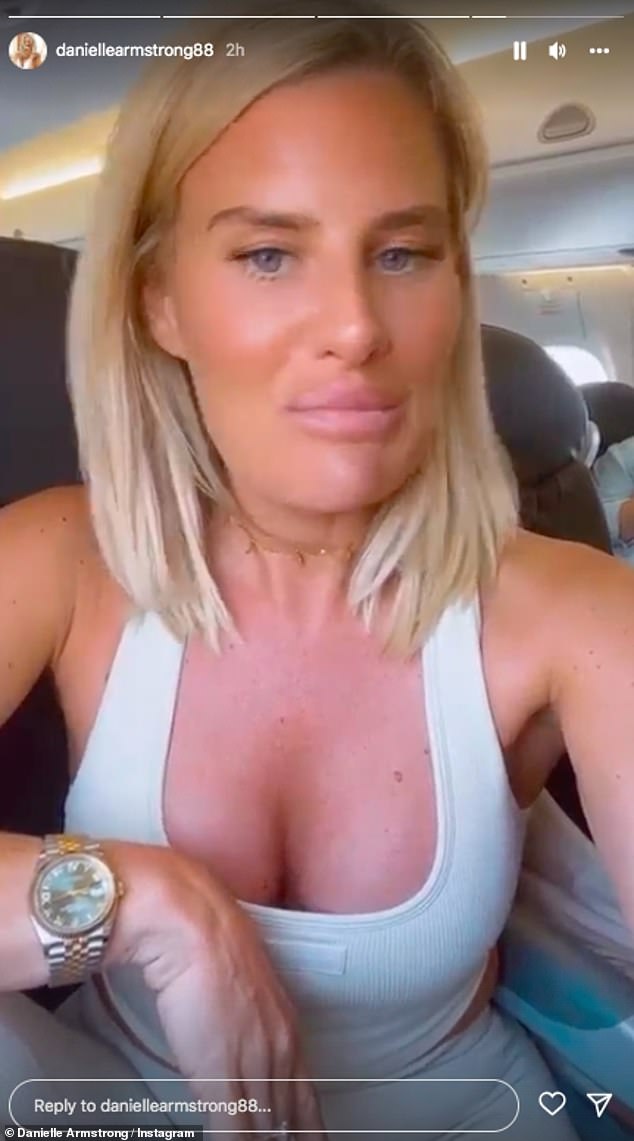 ‘Blessed’: She continued: ‘It was everything I had wished it would be and now I’m just so excited to get back to my little Orla’

She said: ‘I’m actually a bridesmaid and I’m so looking forward to that. I’ve never been an adult bridesmaid so I’m really, really excited for that. I can’t wait.

‘I’ve got Danielle’s hen do coming up in a few weeks which is gonna be really fun.’

Danielle and Tom, who are parents to daughter Orla, two, have known each other since they were children, falling in love in 2019 after a series of failed romances for the reality star.

She gushed about their romance in a sweet Instagram post earlier this week, sharing a photo of herself with Tom and writing: ‘Known each other since we were 11 & to think we are getting married in just a few months.’ 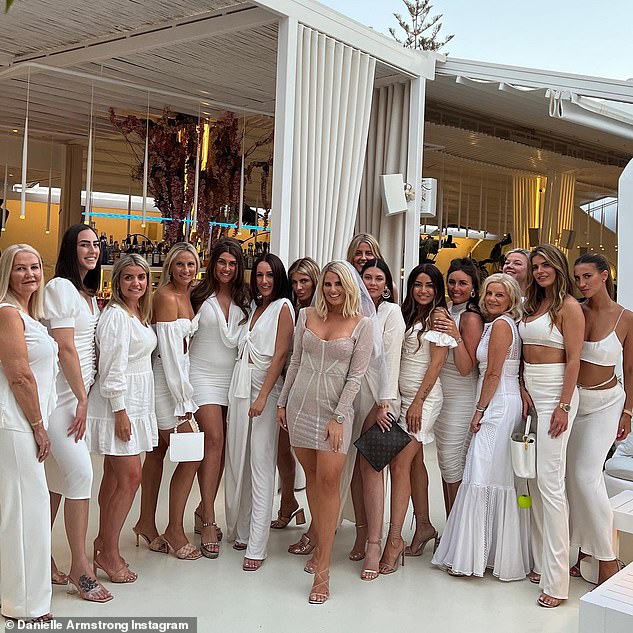 Group: Danielle posed up with her hen party friends in their ensembles earlier in the weekend as they went out for a meal together

It was in March 2020 that Danielle announced she was engaged to Tom – her best friend of 22 years.

The blonde beauty who was expecting her first child at the time and shared the happy news on Instagram during the couple’s romantic babymoon in Dubai.

Showcasing her sparkling ring in a series of loved-up snaps, the mother wrote: ‘Feel Like The Luckiest Girl In The World Right Now… I SAID YES ☺️ #imengaged.’ [sic]

Taking to her Instagram Stories, the Danni Boutique owner was elated as she gushed: ‘So… I said yes! You’ve actually done very well. I actually felt sick from the boat, I didn’t know what to do! 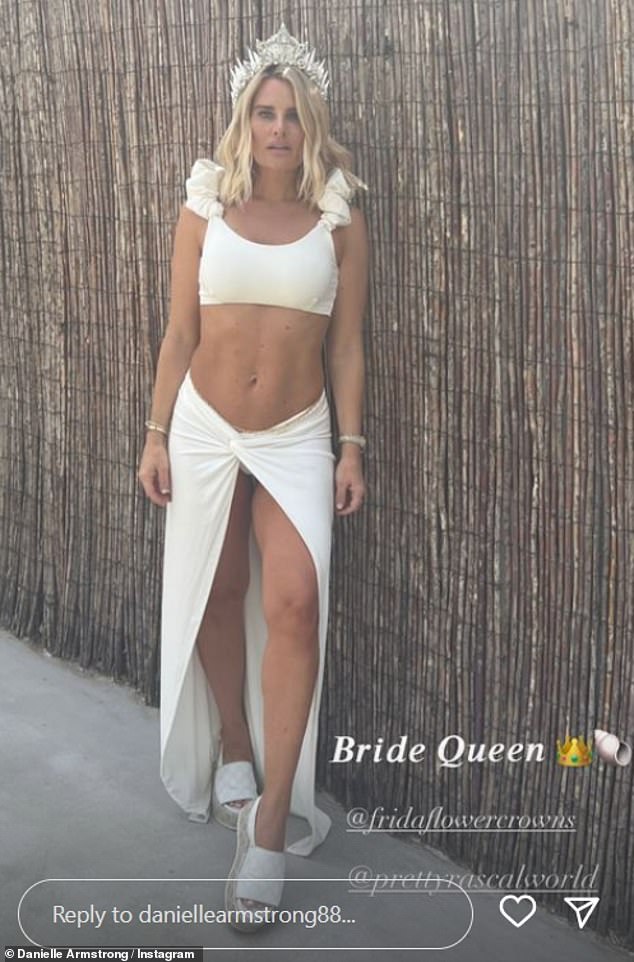 Bride to be: Daniella wore a crop-top and matching skirt with a front split as she posed on holiday while wearing a special crown earlier in the weekend

‘You excited to marry me?’, she asked her partner, before declaring: ‘Mrs. Edney to be!’

The September before, the star confirmed she had found love again with her childhood sweetheart, shortly after splitting from her boyfriend of two-and-a-half years, Daniel Spiller.

Before embarking on a relationship with Tom, the fitness enthusiast split from Herne Bay footballer Daniel in August 2019.

Danielle was previously in a relationship with businessman James Lock, 35, who she dated on and off from 2014 until 2016. 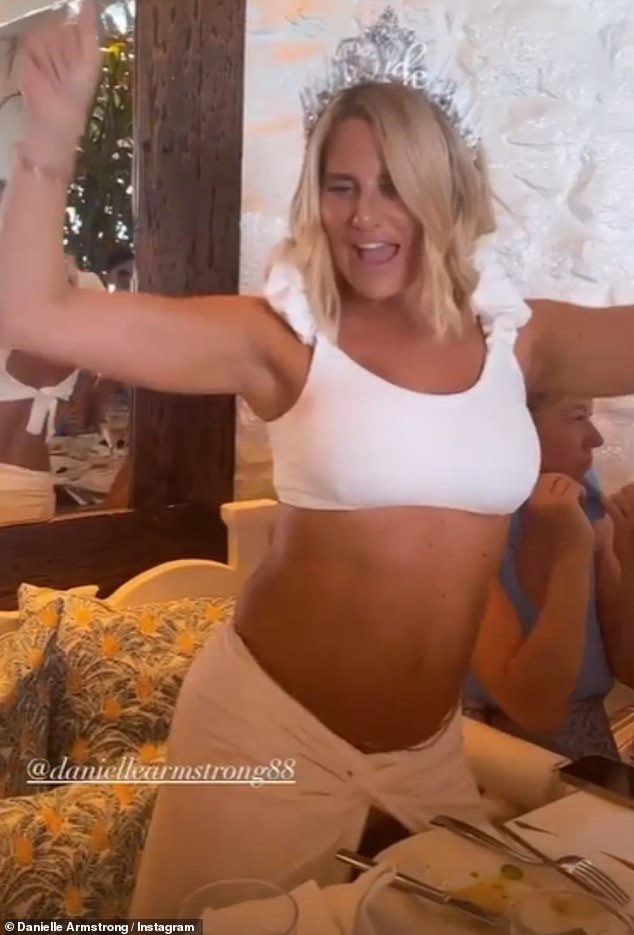 Partying it up: Danielle’s fellow former TOWIE star pal Ferne shared a picture on Instagram of her pal dancing 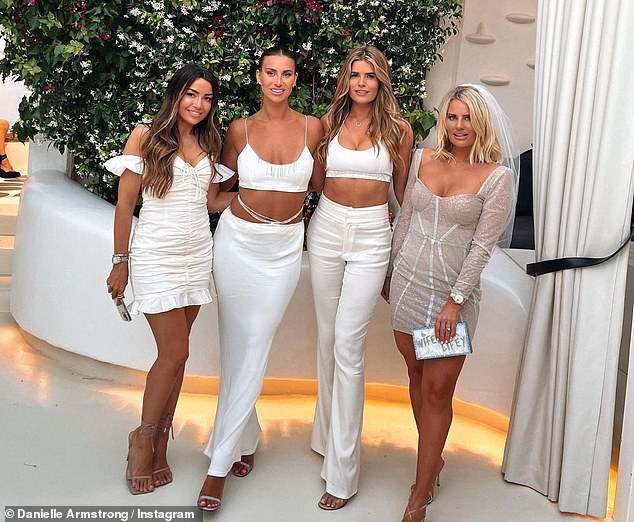 Gals: They looked like they had had an incredible time on the Mykonos hen do (pictured on their first night)