Dave Bautista emotional as filming wraps on Guardians of the Galaxy Vol. 3: 'End of a journey'

Dave Bautista on Tuesday took to Instagram with an emotional message as filming wrapped on Guardians of the Galaxy Vol. 3.

‘Haven’t found the words yet. It ended so suddenly and I was on to my next film before I could process it all,’ Bautista, 52, captioned the shot. ‘End of a journey that changed my life.’ 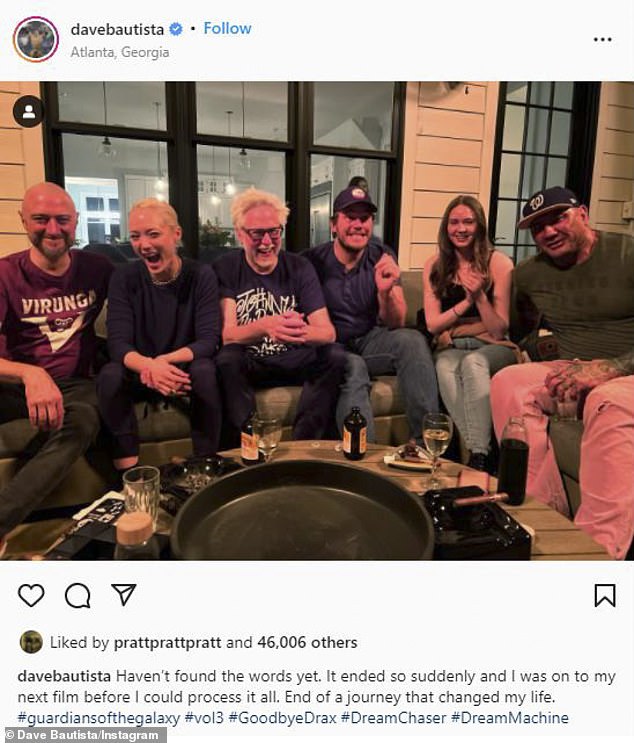 The latest: Dave Bautista on Tuesday took to Instagram with an emotional message as filming wrapped on Guardians of the Galaxy Vol. 3. He was pictured with (L-R) Sean Gunn, Pom Klementieff, writer-director James Gunn, Chris Pratt and Karen Gillan

The Army of the Dead star shared an image in which he sat around a table with his collaborators on the film, including writer-director James Gunn and costars Chris Pratt, Karen Gillan, Sean Gunn and Pom Klementieff.

Bautista has said that the film will mark the last time he plays the role of Drax, which he’s reprised in movies like Avengers: Infinity War, Avengers: Endgame and the forthcoming Thor: Love and Thunder.

The WWE alum, appearing last year on Ellen, said the third installment in the Guardians of the Galaxy series would mark his swan song from the character.

‘You know, the journey’s come full circle and I’m ready to kind of step aside and wrap it up,’ Bautista said. ‘I didn’t think [me leaving the MCU] was going to be news because I figured everybody assumed it. 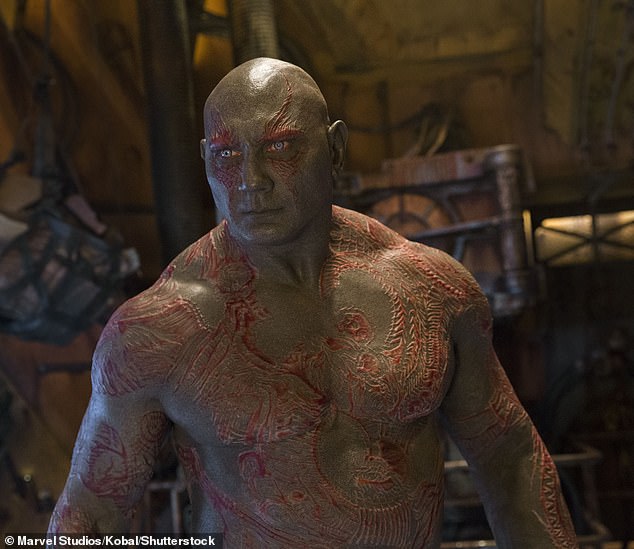 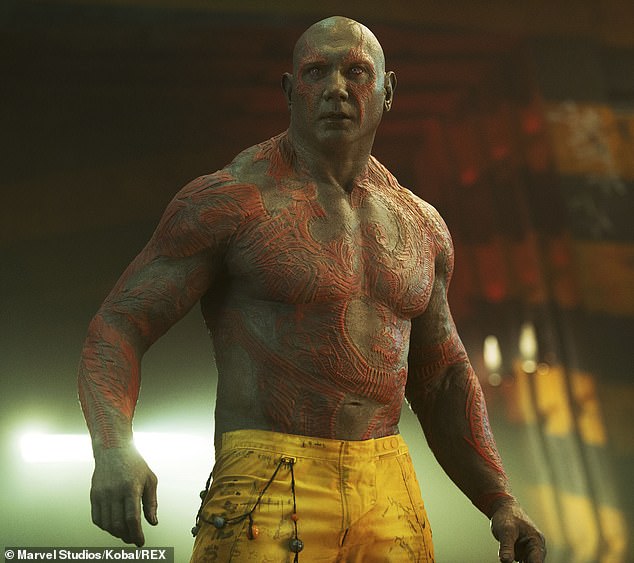 The pro wrestler has reprised the role of Drax in movies like Avengers: Infinity War, Avengers: Endgame and the forthcoming Thor: Love and Thunder

‘This is how this works – we work in trilogies, and James Gunn has already announced that it’s his last film and when James is done, I’m done.’

Gunn on Saturday took to Twitter declaring that the film shoot had concluded.

‘After over 100 days of shooting & over 3000 shots, this is the slate for the final shot of #GotGVol3, presented to me by the camera crew,’ Gunn said. ‘It was an easy shot of Rocket seated … [and] took everything in me not to break down sobbing on the spot.

‘The majority of the last ten years of my life have been spent working on & thinking about the Guardians. I still have a long road ahead of me with VFX & editing, but it was still momentous to me.’

Gunn added: ‘It is somewhat simple to explain to others how much I love this cast & crew. It is more difficult to explain how much I love these characters – that I see them as parts of myself & parts of those I love, & filming them, & writing their words, is a way of expressing that love. 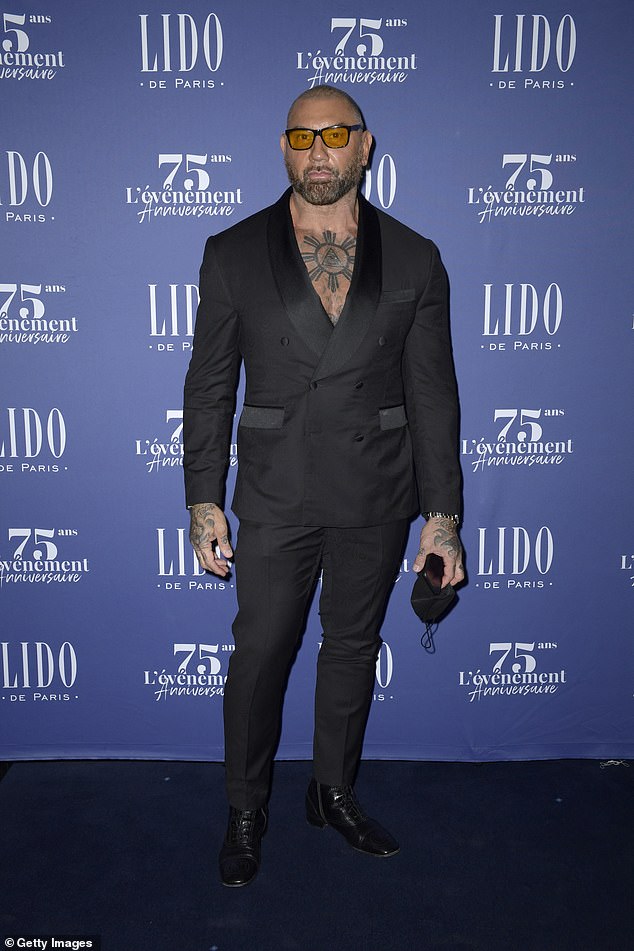 The actor, pictured in Paris last fall, said last year of the GotG series: ‘You know, the journey’s come full circle and I’m ready to kind of step aside and wrap it up’ 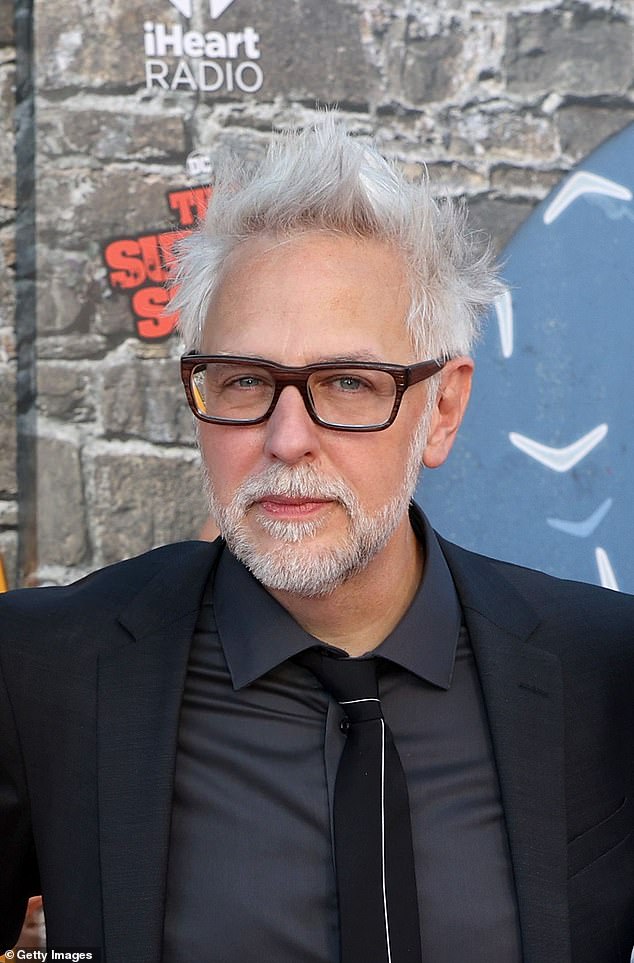 James Gunn, pictured last year in LA, said that wrapping on the film was ‘momentous to’ him

The director said that ‘shooting that last shot was a reminder of the warm impermanence of life & love, & how that impermanence makes it so precious, so valuable, & is a good reason to be grateful for what I have right now.’

The filmmaker also posted the group shot (with Bautista) on Instagram with a message lauding the performers and crew he worked with on the movies.

‘And that’s a picture wrap on the Guardians of the Galaxy trilogy,’ he said. ‘I love this amazing cast & crew & their beautiful talent & kind souls. I’m a lucky human to have them on the journey with me for nearly a decade. (And yes Zoe [Saldaña] was with us but the only picture I have with her has an unannounced actor with us!).’

Saldana responded to his message, ‘Love you guardians! Yes I was there but left early cause I’m an old tired mama! Hahahahahahaha.’

Cruz Beckham, 17, relaxes with dad David on board the family's $5M superyacht in Miami

Cruz Beckham, 17, relaxes with dad David on board the family's $5M superyacht in Miami