‘Harper crushing it before our friends bat mitzvah rager,’ the Saturday Night Live alum, 57, captioned the shot, which was posed in front of a set of staircases. ‘My shirt got a bit john travolta in all the chaos.’

The comedy veteran donned a black suit with a white button-up top at the event, with his shaggy brown locks parted. 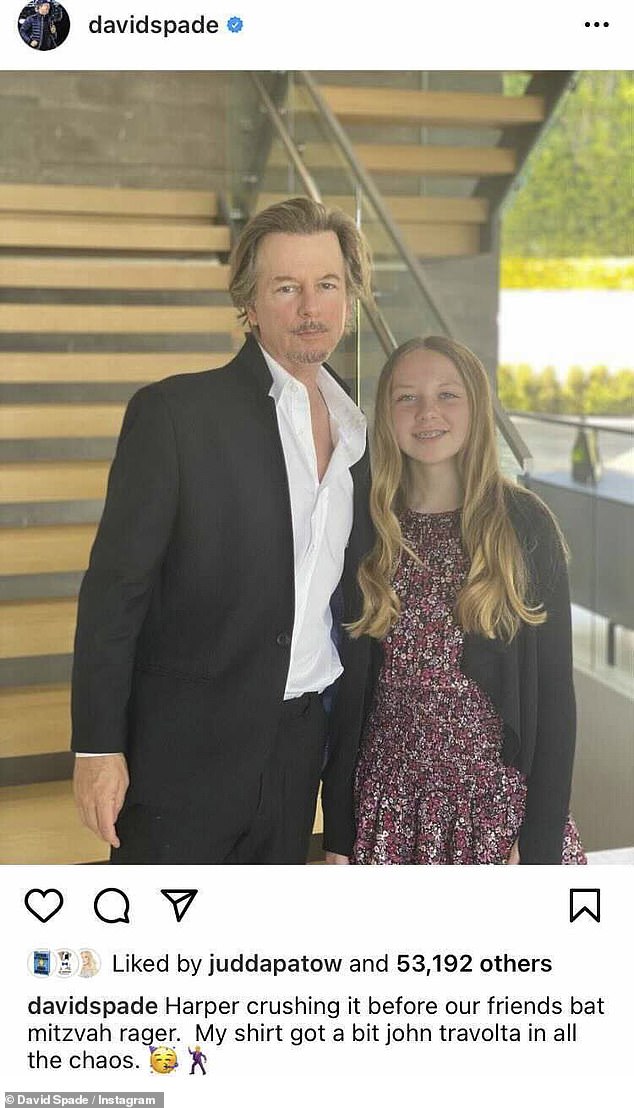 Harper wore a black wool coat over a floral maroon dress with her blonde locks parted down the middle.

The Birmingham, Michigan-born funnyman received a number of responses from his showbiz friends, as comic Lauren Lapkus wrote, ‘Harper is so pretty!’

Howard Stern’s wife Beth left a heart emoji, while broadcaster Lauren Sivan commented, ‘I’ve never seen her smile in a photo with you! Congrats. You finally did it!!!’

Spade, who’s also been seen in films including Joe Dirt, Joe Dirt 2: Beautiful Loser and Dickie Roberts: Former Child Star, welcomed Harper in August of 2008 with his ex-girlfriend, one-time Playboy model Jillian Grace, 36. He has no other children. 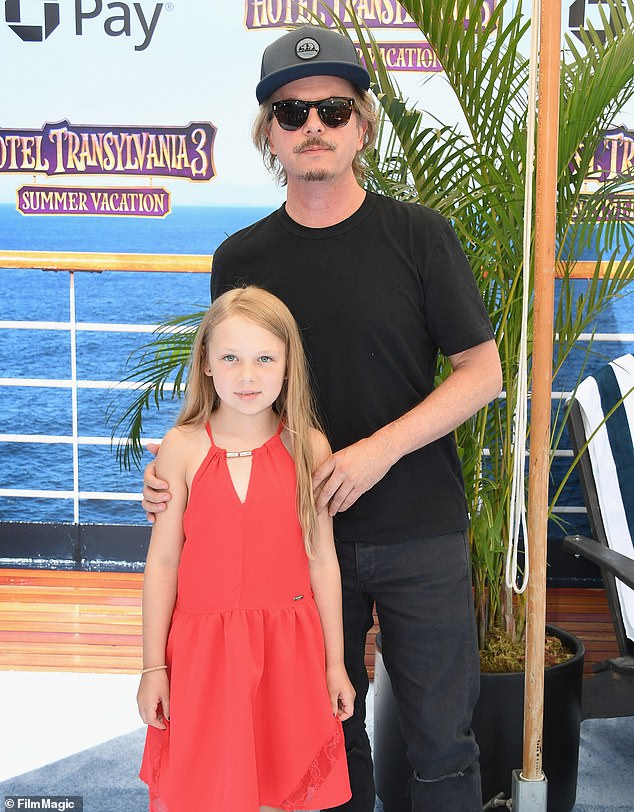 Spade and his daughter were pictured at an event in Westwood, California in 2018 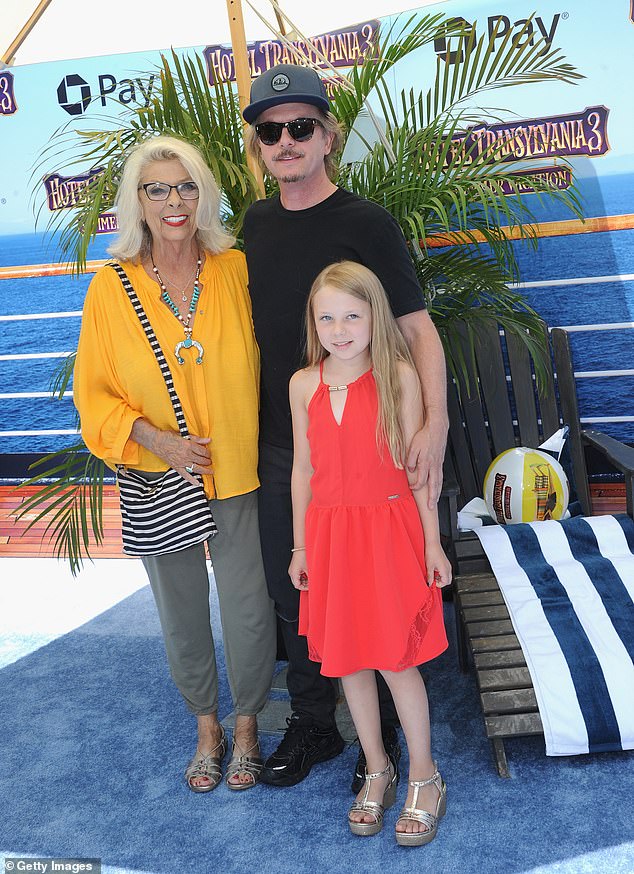 They were joined by his mother Judith M. Spade at the event in Southern California

Spade last week spoke in a comprehensive interview with The Hollywood Reporter in support of his new Netflix special Nothing Personal, which began streaming last month.

Spade opened up about the shifting landscape in stand-up in the wake of the attack on Chris Rock by Will Smith at the Oscars in March, and another last week against Dave Chappelle at the Hollywood Bowl, by a man armed with a knife.

‘Since the Will Smith incident, I feel there’s a change in the air,’ Spade told the outlet. ‘The invisible barrier between audience and stage has been broken. But clearly, the grace period is over. I think all performers will hit first and ask questions later if someone comes at them. Even if it’s a juggler, you might get a bowling pin across the temple.’

Asked about how his colleague Rock handled the situation in the aftermath of the slap from Smith, Spade said, ‘I think he got a lot of props for just continuing and not causing a scene more than it was, and sort of defusing it and moving on, and it’s really pretty much the only option.

‘And you are at the Oscars – it is a worldwide event, and there’s just too many things going through your head at that point. I think he picked the right one, and just move on and try not to over-talk about it because it was talked about so much. Let it die down.’ 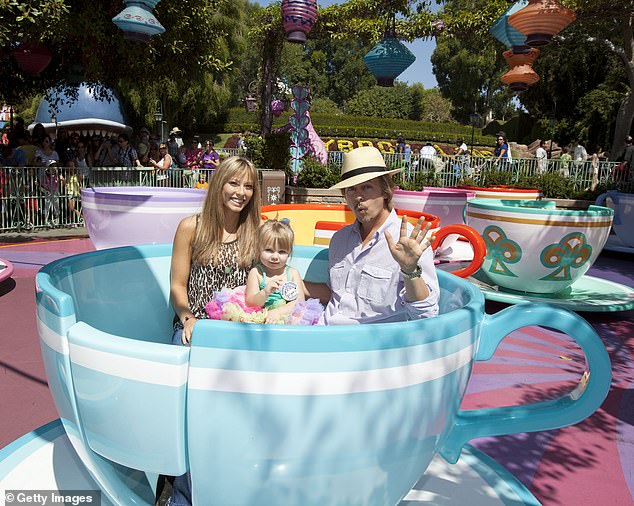 Spade was snapped on a Disneyland ride with Harper and her mother, one-time Playboy model Jillian Grace in September of 2011 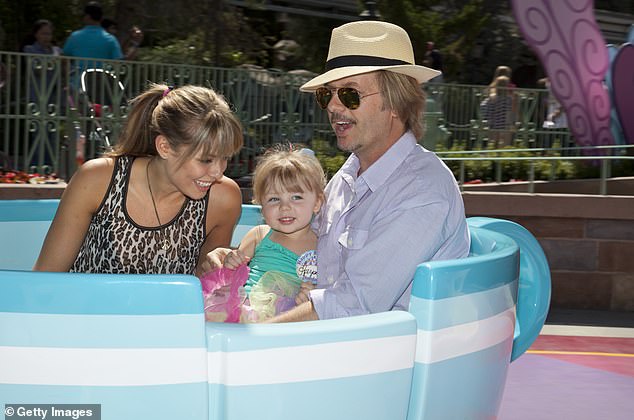 Spade was also asked about his Nothing Personal reference of Alec Baldwin’s fatal shooting of cinematographer Halyna Hutchins on the set of the film Rust last fall, and if he told Baldwin that he would be mentioning it.

‘I forgot about that one … funnily enough, no,’ Spade said. ‘I love Alec Baldwin, and he was great on SNL … that was something I threw in that morning of the special because it fit into that chunk.

‘But again, people are going to know that that’s a very serious situation. But when you say a flip remark, it catches you off-guard. It doesn’t mean I think lightly of what happened. It doesn’t mean any of that.’