Regulators came under fierce criticism after a six-year probe into disgraced former bosses of failed bank HBOS ended in no action being taken.

Officials at the Bank of England and the Financial Conduct Authority (FCA) said there would be no consequences for ten people including its former chief executives James Crosby and Andy Hornby, as well as chairman David Stevenson, in what was one of the worst scandals in British banking history.

HBOS, which was for a time the UK’s largest mortgage lender, went bankrupt in 2008 after years of excessive risk-taking and fraud. It was rescued by Lloyds in a Government-engineered deal at a cost of £20billion to the taxpayer. 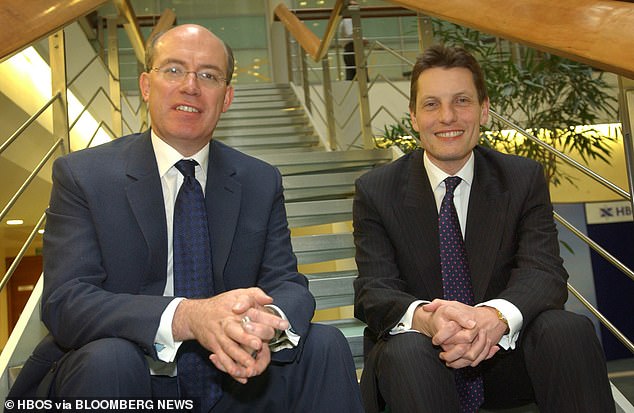 Yesterday, the Bank of England said the authorities had conducted ‘rigorous and forensic’ investigations but concluded no further steps would be taken and the matter would be closed. It did not say whether the inquiry, originally expected to last a year, had been ended due to lack of evidence or if there had been no wrongdoing.

The decision drew outrage from MPs, including Kevin Hollinrake, who is on the Treasury Select Committee, who warned events like HBOS would ‘keep happening’ until people were held to account. He said: ‘When has the FCA ever found anyone responsible for anything?

‘Time and time again the bosses of these big banks get huge rewards for abject failure.’

The FCA announced in 2016 that it would launch a fresh investigation into HBOS, after a stinging review led by Andrew Green QC criticised the previous regulatory response as inadequate.

The decision not to act could be damaging for Nikhil Rathi, who became head of the FCA in 2020. He is under pressure as it suffers low morale, possible strikes, a case backlog and few successes.

The Prudential Regulation Authority and the FCA said: ‘The authorities gathered more than 2m documents, interviewed former HBOS senior managers, engaged extensively with the parties, and undertook substantial analysis of contemporaneous documentary evidence considering those senior managers’ roles and responsibilities at HBOS prior to its failure in 2008.

‘Independent decision-makers reviewed the matters and have each determined no enforcement action should be taken.’

Lloyds has been dealing with the fallout from the scandal for more than a decade. But the events failed to incur any consequences for Hornby despite him leaving in 2008 with his reputation as the rising star of banking in tatters.

How Hornby made millions

Former chief Andy Hornby, 55, has taken on a string of lucrative roles and made millions since leaving in shame.

Following his exit, he was boss at Alliance Boots, earning £4.1m for two years’ work, bagging a £450,000 ‘golden goodbye’ for not joining a rival.

Later, at gambling firm Ladbrokes Coral he was chief operating officer. While his salary was not disclosed, he made around £8m when it was sold to GVC Holdings.

He now leads The Restaurant Group and has been paid over £1.5m since joining in 2019.