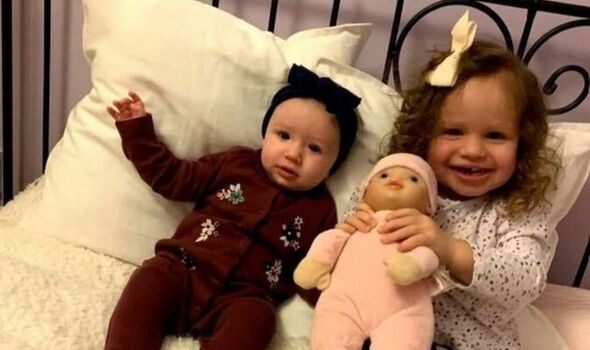 Teddi and Nala were both diagnosed with the brain disorder. (Image: Chronicle Live)

Ally Wallace, 32, and Jake Shaw, 29, discovered their two daughters Nala, two, and 11-month old Teddi both suffer from a genetic brain disease. Known as Metachromatic Leukodystrophy (MLD), the condition affects the ‘white matter’ of the brain and causes the sufferers to lose physical and mental skills.

Tragically, Nala is unable to receive treatment for the disease as her brain has already deteriorated too far.

Her parents received the heartbreaking news she will continue to lose all her functions and is not expected to live beyond childhood.

Teddi was tested for MLD after Nala was diagnosed with the disease earlier this month.

As the youngest sister’s condition is not at an advanced stage she will be able to undergo life-saving gene therapy treatment in Manchester next month, Chronicle Live reported.

Ally and Jake, who live in Shilbottle, Northumberland, have been told that they are both carriers of the genetic condition, giving them a one in four chance of passing it on to their children.

“It’s just awful because Nala was such a character. She’s gone from being this hilarious little girl, always singing along to Frozen every day, and now she can’t even move. She can’t feed herself or play with her toys anymore.

“Nala has saved Teddi’s life. If Nala didn’t have the disease, Teddi’s disease wouldn’t have been found quickly enough.

“We’re going to carry on the legacy that she saved her sister’s life. It’s heartbreaking but it’s the reality.”

Ms Wallace first took Nala to the doctors after becoming concerned about her walking difficulties, which included walking on the inside of her foot.

She said her daughter’s mobility got worse and she developed a tremor in her hands.

Ms Wallace said doctors began looking for neuromuscular diseases and she was put on a waiting list to see a paediatrician.

She said: “Nala started to have these episodes. She would start crying and it was impossible to calm her down. She was shaking that much it was almost as if she was having a seizure.

“It happened two nights in a row and on the second night I decided to phone an ambulance. By this point she couldn’t stand on her own and she could barely get herself off the sofa.”

Nala was taken to the Royal Victoria Infirmary (RVI) in Newcastle to undergo an emergency MRI scan due to concerns she may have had a brain tumour.

It was then that the parents received the news that their daughter had MLD.

Ms Wallace said: “I didn’t have a clue what it was. To start with I was relieved because for months I thought she had a brain tumour.

“After the doctor left the room, Jake went onto Google and he went silent and white. He said ‘I have just Googled it and it’s not good, I have seen the life expectancy’. At that point I told him I didn’t want to know.”

As the condition is genetic, the pair brought their younger daughter Teddi into the hospital for tests.

It was then discovered she too had the disease.

Ms Wallace said: “It’s incredibly unlucky that both parents have this gene. If we both have the gene then there is a one in four chance of passing it on and we have passed it on to both children.

“It’s extremely rare, it affects one in 40,000. I have never heard of it before and I don’t think anybody around me has heard of it.”

There was previously no treatment available for the disease, according to the NHS.

However, the health service struck a deal in February this year for the gene therapy Teddi will undergo.

The 11-month-old will begin her treatment, which includes chemotherapy, at the Royal Manchester Children’s Hospital on June 21.

Her mother said: “Just the thought of her little body going through that doesn’t bare thinking about. We’re focusing on the fact this is going to hopefully save her life.

“They’re going to remove one of her ovaries and freeze it for the future as the treatment she is having will make her infertile. It’s just not something you think about doing when she’s not even one.”

Nala’s health has deteriorated over the past few months.

She is likely to need a peg fitted in the coming months which will feed her.

The life expectancy of a child with MLD is between five to eight years.

Ms Wallace said: “I can tell she’s frustrated because she can’t understand why she can’t do anything anymore. She’s only two so we can’t explain to her what’s going on either.

“She doesn’t understand what’s happening to her body and why she can’t do anything anymore. She will be aware of everything that goes on around her but she won’t be able to control her own body.”

Ms Wallace has set up a GoFundMe page to raise funds for a trip to Disneyland for Nala as well as equipment that can make her more comfortable.

She said some of the money will also be used to support Teddi as she goes through treatment.

A number of her close friends – Shannon Whiting, Jodie Dunn and Courtney Dunn – are also holding a fundraising event to raise money for the family at Shilbottle Community Hall between 1-4pm on July 30.

Ms Wallace added: “I just want to say a huge thank you to absolutely everyone so far who has sent messages, donated and supported us. A special thank you has to go to the Alnwick and Shilbottle community.”