Starmer rules out return to EU or single market under Labour

Sir Keir Starmer pledged to “make Brexit work” as he set out Labour’s five-point plan during a speech at the Centre of Economic Reform on Monday. The Leader of the Opposition used his speech to vow to keep the UK out of the EU’s single market and customs union. Sir Keir, a leading advocate of a second referendum on EU membership while serving as Jeremy Corbyn’s Shadow Brexit Secretary, also claimed Labour would tear down unnecessary trade barriers, keep the country safe, invest in the UK and support Britain’s world-leading services and scientists.

However, pro-Brexit campaigners have rubbished the Labour leader’s plan.

A senior staff member on the 2016 Vote Leave campaign said: “I am concerned as to whether first of all Sir Keir Starmer will still be Labour leader and secondly [because] he doesn’t have a great record on sticking to what people voted for.”

The decision to resign if hit with a fine has mounted pressure on the Leader of the Opposition as the force is expected to make its announcement in the coming days.

However, Sir Keir’s legacy as the Remain-supporting Shadow Brexit Secretary has followed him to the Labour leadership as Conservative MPs continue to claim the Holborn & St Pancras MP voted against Brexit on 48 occasions and was a leading figure in the People’s Vote campaign.

The Vote Leave source also suggested Labour could be forced to buckle on its pledge to keep Britain out of the EU’s orbit if it fell short of an overall majority at the next general election.

They said: “Labour is basically unable to win the next general election without winning seats in Scotland and therefore you’re in coalition territory.

“Who is he going to turn to? The Liberal Democrats? The SNP? Or possibly both?

“I wouldn’t trust Keir Starmer not to start back-tracking on that.”

Another leading pro-Brexit campaigner told Express.co.uk: “If he needed to go into coalition with the Liberal Democrats or even worse the SNP they may extract that as the price for a Labour Government and I am sure it will be a price he is willing to pay.” 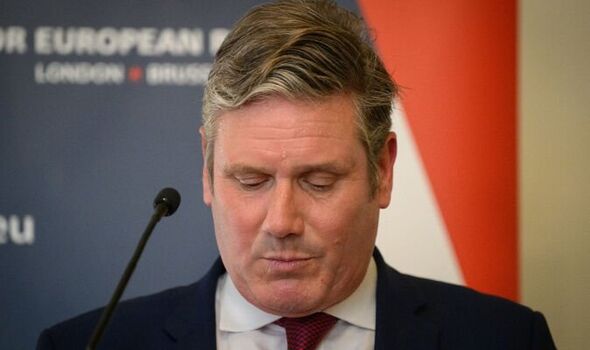 Current opinion polls indicate Labour would emerge as the largest party in a general election but fall short of the 326 seats to form a majority Government.

Britain Elects currently puts Labour on 306 seats and the Conservatives on 245.

This could force Sir Keir to look for support from as many as 24 Liberal Democrat MPs or 50 MPs from Nicola Sturgeon’s Scottish National Party.

Speaking about the reason behind the Labour leader’s Brexit u-turn, the former Vote Leave source said: “He is quite obviously playing to the ‘Red Wall’ and thinking if we go into another general election with Brexit still playing around that is going to play badly for Labour.

“But when you look at Labour MPs there are very, very few of them who have actually embraced Brexit and a lot of them are still trying to refight the referendum.”

They added: “I think it will upset the Labour Remain voters and it will not bring back those voters who traditionally voted Labour but have now found they can vote for other parties.”

Sir Keir also came under fire from an ex-insider at the post-referendum campaign group Leave Means Leave for failing to back the wishes of the British people after the vote in 2016.

They told Express.co.uk: “Millions of lifelong Labour voters were abandoned by their party in 2019, and the idea that this will be forgotten about because of Starmer’s volte-face shimmy is for the birds.

“This recent policy announcement will simply alienate Starmer from the fanatic Europhiles in Islington that still haven’t recovered from 2019, whilst the rest of us in the country will carry on ignoring him.

“He was one of the key architects of the second referendum campaign, and it’s laughable to watch him try and convince the public that he can be trusted not to reverse Brexit.”

The ex-Vote source insider said: “There’s some fancy phrases in there but where’s the substance?” (Image: Getty)

However, another Brexit campaigner has alleged Sir Keir could be putting together an even more direct plan to drag Britain closer to the EU.

A source from the former Leave.EU campaign, which lost the official designation to Vote Leave in 2016, said: “Keir has got a headline saying no change to Brexit but what he is doing is proposing a whole series of technocratic alterations that means Brexit cannot be a success.”

The insider then suggested this could give the Labour leader the chance to take Britain back into the EU in a decade’s time when Brussels will be “a lot worse” than it was in 2016.

The Leave.EU insider went on to highlight how mutual recognition and defence were key examples of areas in which Sir Keir could steer Brexit Britain off course.

However, other Eurosceptic campaigners seem to think Mr Starmer has offered very little when it comes to detail about his Brexit pledge.

One pro-Brexit campaigner described his “thin” plan as “wishful thinking” and pointed out the Government had already tried to renegotiate elements of the Northern Ireland Protocol.

However, the most damning assessment came from the Vote Leave insider.

They said: “There’s some fancy phrases in there but where’s the substance?

“The devil is going to be in the detail.

“He says he is going to get various deals with the EU but the EU is not up for renegotiating anything.”

Sir Keir Starmer was a leading advocate of a second referendum on EU membership. (Image: Getty)

Speaking about the Northern Ireland Protocol, the ex-Vote Leave insider claimed: “The only way Starmer is going to get a deal is by giving into EU dictation of terms.”

They also warned this could keep an Irish Sea border in place, frustrate Ulster Unionists and assist the SNP’s IndyRef2 campaign.

Tearing down unnecessary trade barriers also posed a problem for the former Vote Leave source as it was claimed signing up to Brussels’ rules on agriculture and food could “hamper” Britain’s ability to sign free trade agreements around the world.

The UK has signed several bespoke free trade agreements since leaving the EU, including with Australia and New Zealand.

The Department for International Trade has also opened negotiations with India and Canada.

However, Brexit-backing campaigners even suggest security deals, such as Anglosphere accords like Five Eyes and AUKUS, could be put at risk if the Labour leader entered Downing Street at the next general election.

The Vote Leave insider, echoing the campaign’s referendum arguments, went on to claim: “Turning to the Commonwealth is more exciting than being locked into fortress Europe.”

Sir Keir’s Eurosceptic awakening could also spark fury inside pro-EU wings of the Labour Party as it comes just days after London Mayor Sadiq Khan told LBC that Brexit was an act of “self-inflicted harm” and voiced his support for rejoining the single market.

Walthamstow MP Stella Creasy, who chairs the Labour Movement for Europe, also said: “We urge Keir to make sure nothing is off the table as a solution in the fight to tackle the cost of living crisis and protect jobs, trade and security.”

Express.co.uk has contacted the Labour Party and Liberal Democrats for comment.