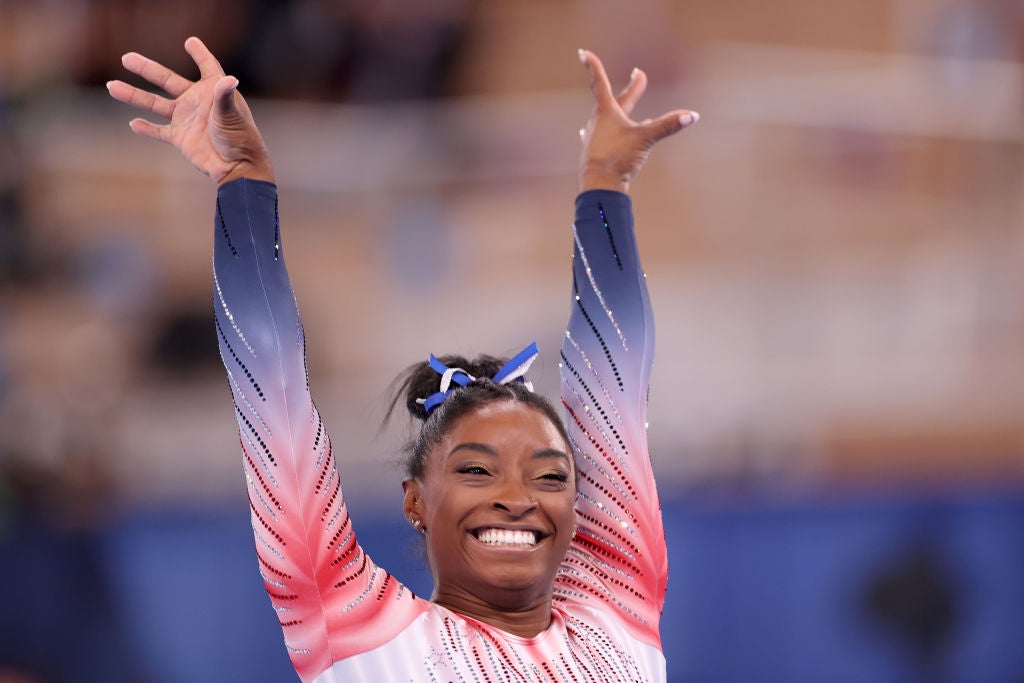 Elite athletes have reacted to Simone Biles’s return to Tokyo 2020, and her winning bronze in the beam final on Tuesday.

“So awesome to see you back up there!” Tweeted fellow athlete and American Olympic champion swimmer Simone Manuel. “You have so much to be proud of! Your resilience is so inspiring!”

Simone Biles took a break from the games in July, due to mental health issues. The gymnast dropped out of the women’s team final, plus four of her individual finals.

“Don’t let others define you. You define yourself … terrific to see you back out there, Simone. Rooting for you, always.” tweeted tennis legend Billie Jean King, after Biles’s bronze win.

“Simone, you have thrilled us with out-of-this-world gymnastics and made us smile, laugh, jump for joy and out of our seats, but that tough and tenacious beam routine was EVERYTHING! You should have it bronzed! Oh wait, you did! I am over-the-moon happy for you,w” rote former Olympic gymnast Kathy Johnson Clarke.

Twenty-four-year-old Biles has been widely praised for setting her own boundaries and highlighting the mental pressures in competitive sport.

“This is not a moment of weakness, it’s absolutely far from it for Simone, but it’s a real sign of strength, on one of the world’s biggest stages. The four-time Olympic champion has transcended her sport, and raised awareness on a range of very important issues,” said former professional footballer Alex Scott during an Olympic broadcast on BBC after Biles’s initial withdrawal.

“Finding one’s voice is just a difficult as any skill that can be mastered. Simone has ensured that the Tokyo Olympics will also be defined by things other than sport, a conversation that needs to be continued. Mental health is important and it does matter.”

The first African American woman to win an Olympic gymnastics gold medal, Dominique Dawes, wrote about Biles’s withdrawal decision in The Washington Post: “Biles has underscored for us all that mental health is worth more than a gold medal.”

“It definitely feels more special, this bronze, than the balance beam bronze at Rio. I’ll cherish it for a long time,” Biles said post-event.

“It’s been a very long week, a very long five years. I didn’t expect to medal today, I just wanted to go out and do it for me and that’s what I did.”

Commentators across the world of sport and politics have recognised the athlete’s achievements in and out of the gym at Tokyo 2020.

“Biles went out on her own terms and showed the importance of athletes preserving their mental health,” wrote Lukas Weese on Twitter. “You did what was best, not what was easiest!” posted democratic nominee Pam Keith.