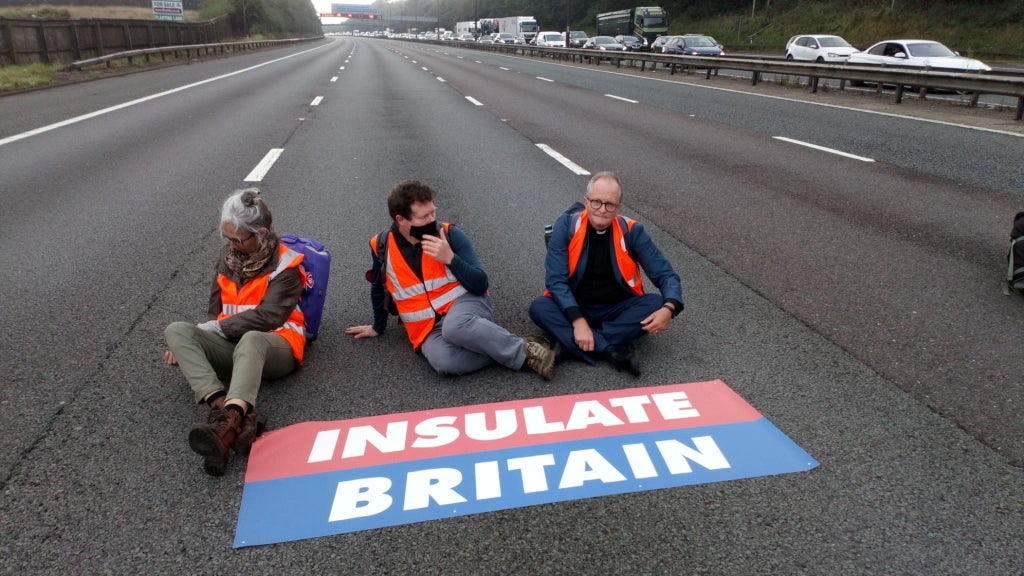 Dozens of climate protesters have been arrested after blocking parts of the M25 for a second time in three days.

Three people have also been arrested on suspicion of organising the event.

The protesters targeted Junctions 1a and 1b for Dartford, Kent, the main carriageway between Junction 8 at Reigate and Junction 9 at Leatherhead, Surrey, and Junction 23 for South Mimms, Hertfordshire.

Insulate Britain said it was demanding “credible action” from the government to target climate change, by insulating all homes across the UK.

Its statement read: “It is a total no-brainer and yet this government refuses to get on with the job. This is criminal negligence.”

However, the government argued the protest was counterproductive with the lines of stagnant vehicles only adding to emissions.

Business Secretary Kwasi Kwarteng said: “These actions are not only highly disruptive to those going to work and transporting vital goods, but are putting lives at risks on a busy motorway.

“Not to mention the resulting traffic delays will only add to vehicle emissions.”

The Metropolitan Police said it cleared Junction 25 of protesters, arresting 14 for obstructing the public highway, including three who had glued themselves to the road or each other.

It said: “We cannot remove protesters who are glued to the road without specialist equipment and trained officers. This was happening at multiple locations around the M25 and it took time to resolve – time which could have been spent policing our communities in London.

“A further three people have been arrested across the country on suspicion of orchestrating the protest.”

Surrey Police said it had helped the Metropolitan Police in dealing with the protesters, adding it had made 32 arrests.

It added there had also been a crash involving multiple vehicles in Leatherhead though it was too early to determine whether it had been linked to the protests.

Hertfordshire Police said its officers were at the scene within minutes of being alerted of the protest, and had attempted to engage with the group before arresting 18 people.

Superintendent Adam Willmot said: “Protesters ignored repeated requests from officers to move to a safer and less disruptive location, and alleged that they had glued themselves to the Tarmac, making it clear that their aim was to cause as much disruption as possible.”

Kent Police said it had arrested 21 people for obstructing the highway.