Easyjet heads for ANOTHER year of losses: Airline braced for £200m hit as it is forced to cancel thousands more flights over summer

Easyjet will likely rack up another year of losses as it cancels thousands more flights and leaves holidaymakers in the lurch.

The budget airline was on track to return to profit this year as it bounced back from the pandemic.

But amid chaotic scenes at airports across the UK and Europe, the carrier yesterday slashed the number of flights it planned for the summer. 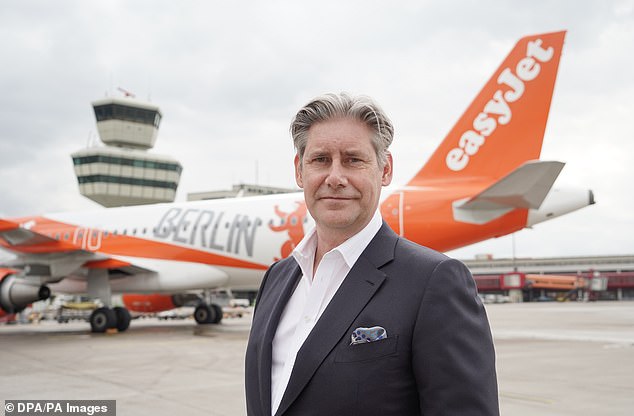 It is feared as many as 10,000 flights could be cancelled between July and September – leaving the holiday plans of 1.5m customers in jeopardy.

Analysts had expected EasyJet to be back in the black this year having suffered £2.2billion of losses since coronavirus struck in 2020.

But with revenues taking another hit and costs rising, they slashed their forecasts yesterday. Experts at private wealth manager Bernstein warned the lost flights could cost it as much as £200million.

And brokers at Peel Hunt said EasyJet was on course to make a £59million loss this year having previously pencilled in a £44million profit.

Analyst Alex Paterson said: ‘Because the disruption has dragged on, costs have increased.’

Sophie Lund-Yates, an analyst at Hargreaves Lansdown, said: ‘These plans are going to prolong total recovery for EasyJet. The costs that come with ramping operations back up are huge.

‘So while it’s a customer apology being doled out today, any deviation from the new plan will mean the same courtesy would be due to shareholders.’

In an unscheduled trading update, EasyJet said it was ‘proactively consolidating’ – or axing in plain English – flights in a bid to avoid last-minute cancellations.

It said the move would give customers advance notice and the chance to rebook on alternative flights.

Holidaymakers have been hit by mass cancellations and long queues at airports ever since travel restrictions were eased in spring, with EasyJet and British Airways among the worst offenders amid staff shortages and IT failures.

In a move that will fuel concerns about the summer, EasyJet said it expects capacity between April and June to be around 87 per cent of pre-pandemic levels, having previously forecast 90 per cent.

And it cut the outlook for the crucial July to September holiday period from 97 per cent to 90 per cent – raising the prospect that 10,000 flights could be axed.

In a grovelling apology, chief executive Johan Lundgren said: ‘We are sorry that for some customers we have not been able to deliver the service they have come to expect from us.’

Heathrow was also forced to ‘apologise unreservedly’ after it cancelled flights at two terminals yesterday following a weekend that saw luggage pile up.

Lundgren said he was forced to act after London Gatwick and Amsterdam’s Schiphol airport imposed a cap on flights.

The airline has already cancelled thousands of flights, particularly during school holidays at Easter and the half-term period, which coincided with the Jubilee bank holiday weekend.

No-frills rival Ryanair, however, capitalised on the cancellations, adding over 200 extra flights from its UK airports.

Easyjet’s woes have coincided with claims from the International Air Transport Association (IATA) that the aviation industry is ‘within reach’ of profitability.

The trade body believes airlines will be back in the black by 2023, with IATA director general Willie Walsh – the former boss of BA – stressing now ‘is a time for optimism’ despite rising costs.

IATA said it expects sector losses to reach £7.9billion for 2022, a significant upgrade to its previous forecast of £9.5billion.