Eating less could add years to your life, if a new study is to be believed.

Yale University scientists say cutting back on calories can ‘rejuvenate’ a key part of your immune system.

Adults who reduced their calorie intake by approximately 14 per cent had a better-functioning thymus gland.

This is the equivalent of around 300 calories for men who stick to dietary guidelines of 2,000 per day for women or 2,500 for men.

The thymus gland, an organ that sits above the heart and produces illness-fighting T cells, usually ages quicker than the rest of the body.

Stopping its decline could ‘enhance healthy lifespan’, according to Professor Vishwa Deep Dixit, a dietitian who was part of the research team.

Researchers believe reducing calorie intake could also thwart inflammation — when the immune system overreacts, leading to a raft of diseases.

Branded ‘exciting’ by the researchers, the study adds to decades-worth of evidence that cutting back on calories can enhance lifespan in flies, worms and mice through bolstering the thymus gland.

It is the first to look at the whether the same happens in humans. 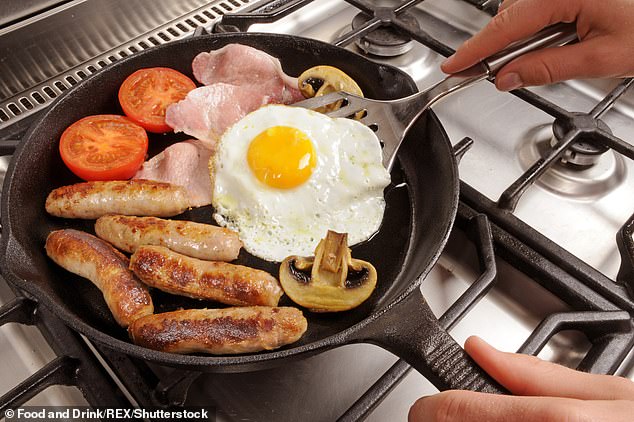 Dropping how much you eat could add years to your life by rejuvenating a gland vital to your immune system, Yale University researchers claim [stock pic]

What is the thymus gland?

The Thymus is a small gland located in the chest just under the breastbone; and is critically important in the body’s response to disease invasion.

As people age, their thymus glands shrink and become harder to locate.

White blood cells originate in the bone marrow. About half of them go directly into the bloodstream and tissue fluids, but the rest of them must pass through the Thymus gland.

The Thymus gland is a central figure of the immune system because of its primary role in processing these white blood cells into T lymphocytes.

First, they stimulate the production and growth of antibodies by other lymphocytes.

Second, they stimulate the growth and action of the phagocytes, which surround and engulf invading viruses and microbes.

The study, published in Science, recruited 238 non-obese adults aged 26 to 47 and tasked two-thirds with reducing their calorie intake.

They were instructed to follow a diet plan aimed at reducing their intake by a quarter. They were not asked to stick to a certain amount of food.

Participants all had their bodyweight measured regularly to estimate how much they were sticking to the plan.

Measurements suggested the volunteers reduced their intake by roughly 14 per cent on average, ranging from 12 to 22 per cent.

They measured T-cell numbers as well as the weight and fat mass around the thymus glands.

They also detected a reduction in fat around the gland, compared to little change in the group who had no dietary restrictions over the course of the trial.

Senior author Professor Dixit, who is the director of the Yale Centre for Research on Aging, said this indicated the thymus was producing more T-cells after two years of eating less than it was at the beginning of the trial.

He said: ‘The fact that this organ can be rejuvenated is, in my view, stunning because there is very little evidence of that happening in humans.

‘That this is even possible is very exciting.

‘There’s so much debate about what type of diet is better — low carbohydrates or fat, increased protein, intermittent fasting — and I think time will tell which of these are important.

‘But this is a very well-controlled study that shows a simple reduction in calories, and no specific diet, has a remarkable effect in terms of biology and shifting the immuno-metabolic state in a direction that’s protective of human health.

‘So, from a public health standpoint, I think it gives hope.’

It is produced by immune cells known as macrophages and can cause age-related inflammation.

Professor Dixit said: ‘These findings demonstrate that PLA2G7 is one of the drivers of the effects of calorie restriction.

‘Identifying these drivers helps us understand how the metabolic system and the immune system talk to each other, which can point us to potential targets that can improve immune function, reduce inflammation, and potentially even enhance healthy lifespan.’