Stowe School piqued the public’s interest when it graced our screens as one of the glorious period settings in the hit Netflix drama Bridgerton.

But now I hear the public school in Buckingham, whose alumni include the likes of Prince Harry’s ex-girlfriends Chelsy Davy and Cressida Bonas, and Virgin tycoon Sir Richard Branson, has stoked some theatrics of its own.

For I can disclose the £40,000-a-year boarding school is pushing through controversial plans for a £6.5 million design, technology and engineering facility to be built on the estate, in the face of fierce opposition from conservation groups.

Historic England, The Gardens Trust and The Georgian Group have claimed that the ‘flawed’ proposal will ‘cause a high degree of harm to the historic fabric and character of one of the most important registered parks and gardens in Europe’.

The landscaped parklands have been run by the National Trust since 1989, while the school’s main building, the Grade I listed Stowe House, is the former country seat of the Dukes of Buckingham and Chandos. 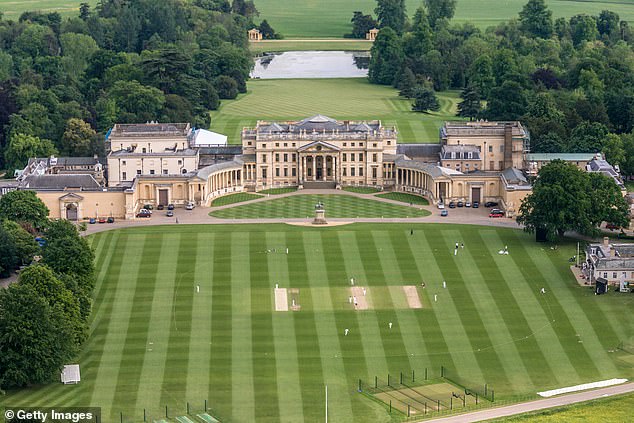 An aerial photograph of Stowe School in Buckinghamshire, which rose to prominence through Netflix hit Bridgerton

The £40,000-a-year boarding school is pushing through controversial plans for a £6.5 million design, technology and engineering facility

It has played host to kings, queens and tsars through the centuries.

The opposers became so incensed by the ‘damaging proposal’ for the development of part of Rook Spinney woodland, an area unaltered since the 18th century, that they sent their appeal to the Housing Secretary Michael Gove.

But he brushed aside their complaints and refused to get involved.

Although permission was granted, planning officers did raise their own concerns and recommended that the application be rejected, stating in their report that: ‘It is the view of officers that the level of harm would be at the higher end of that scale’.

Planning documents show that at least 28 trees will need to be removed, including some that are around 150 years old.

He tells me: ‘We are working closely with our partners and stakeholders to ensure that the whole site is developed sympathetically and in accordance with established conservation and restoration principles.

‘We hope to open the building in late 2023, Stowe’s centenary year.’

Blowing out the candles on her 40th birthday cake was nearly a task of Mission: Impossible-level danger for the franchise’s star Hayley Atwell. 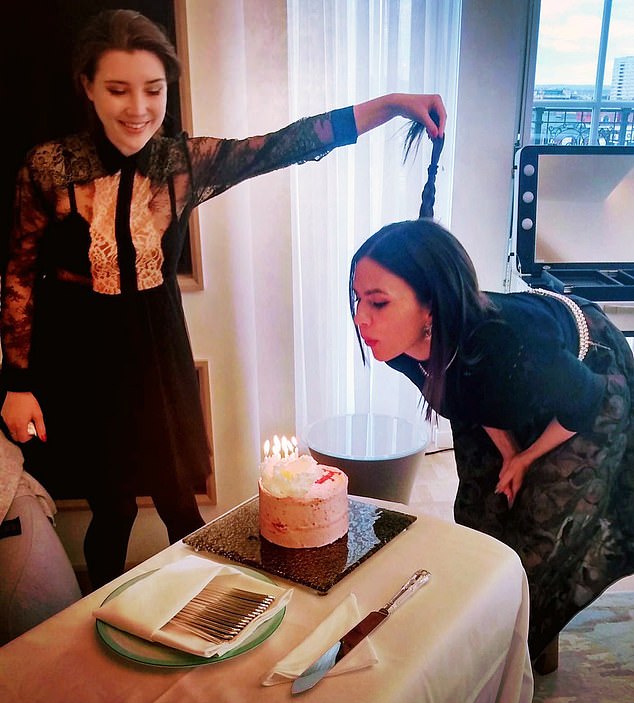 ‘Just a whisper of singe instead.’

Atwell became a family friend after she starred in Brideshead Revisited with Dame Emma, who defended her when a producer allegedly ordered her to go on a diet during filming.

Liz’s starry friends get her in hot water

Elizabeth Hurley’s penchant for posting swimwear pictures seems to have finally hit a sour note with her fans.

During an escape to the sun, the actress took great pride in sharing a photo of her rescuing two starfish.

‘Found these magnificent starfish, alive but stranded, on the beach — they’re now happily back at the bottom of the sea,’ the 56-year-old boasted. 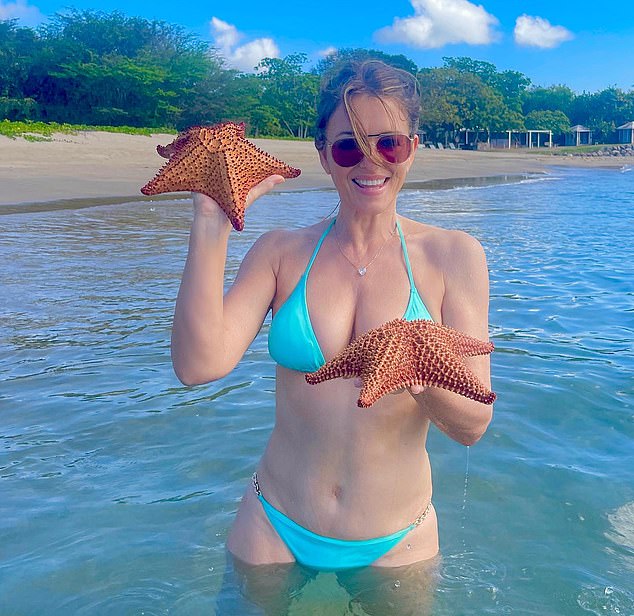 Elizabeth Hurley posted a picture in her bikini holding two starfish to her social media, but has received criticism

But despite her best intentions, it is recommended to never touch a starfish.

One disgruntled fan wrote: ‘They are extremely delicate and most likely won’t survive once you take them out of the sea and manipulate them.’

Another remarked: ‘You just killed those stars.’

‘It fills me with anger and frustration,’ says the 28-year-old, who holds dual UK and U.S. citizenship. 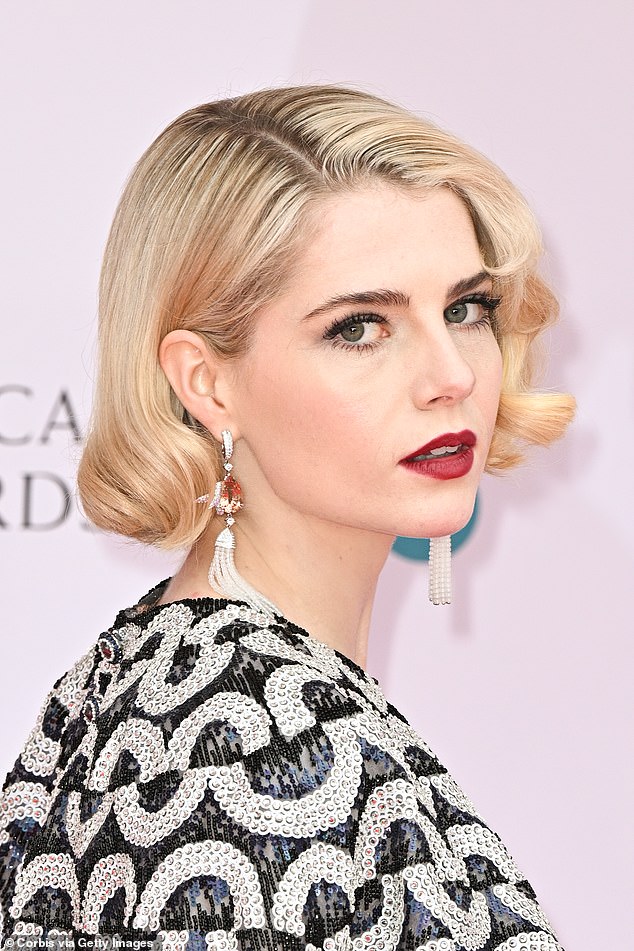 ‘You can’t present as angry because people switch off and don’t listen to the angry woman.’

She adds: ‘A man walks into a room and you take him as he is, but as a woman there are so many factors that people will base their judgments on.’

She’s not usually one to blow her own trumpet, but sustainability warrior Stella McCartney wishes she had been admired more for being the first fashion eco-rebel.

‘As a fashion designer that has shunned fur and leather, and has never used animal products, I was the brunt of a joke in the beginning,’ says the 50-year-old daughter of Sir Paul.

She tells chef Ruth Rogers on her River Cafe Table 4 podcast: ‘I always used to come at it and think “I don’t understand why I’m not the coolest rebel punk-rock person in the room, because if you’re all using fur and leather, and all eating meat, you’re the ones that are boring and mainstream.’

McCartney, who was awarded an OBE in 2013 for services to fashion, adds: ‘I’m the one that’s questioning and pushing buttons and challenging convention.’

The 67-year-old opines: ‘Marvin Gaye wrote What’s Going On in response to the Vietnam war.

‘Where is the record responding to the Ukraine war?

‘Where is the fantastic pop song about Putin?’ 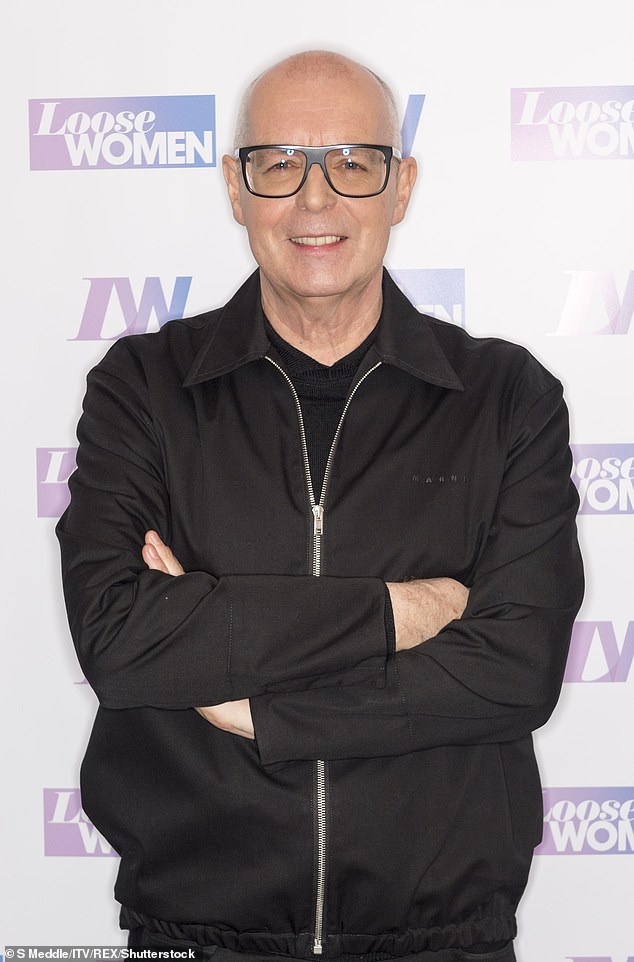 The synth-pop singer who, alongside keyboardist Chris Lowe, has sold more than 100 million records worldwide, says his interest in the industry has waned.

‘I wish there was more art in it, rather than just people dissing their boyfriend,’ he says.

Tory MP Jacob Rees-Mogg backs Transport Secretary Grant Shapps’s pledge to do away with the ‘endless torrent’ of train announcements.

The 52-year-old says: ‘I was collecting a son from a trip and they were saying “Children wander off on the baggage trolleys”.

‘I was like “What kind of announcement is that?” Can you just leave us in peace?

‘The Government should not encourage these annoyances.’

Spare a thought for Countdown presenter Anne Robinson, who reveals that driving back from filming for the Channel 4 quiz in Salford is a perilous task.

‘When I’m coming back I can only last about two junctions before I need to stop off and use the loo.

‘And the worst part is that I’m in full make-up and dressed for the show, so when I get out of the car I look like a hooker.’

The Queen enjoys a little je ne sais quoi when it comes to her dining menus, which have traditionally been written in French.

In fact, Her Majesty’s love for the language is so great that she pulls up the Royal Household’s chefs on their linguistic skills.

‘If I get an accent wrong or mix up the masculine and feminine on the menus I send up for her approval, she’ll let me know.

‘Her Majesty misses nothing,’ he says.

Poll result: Should energy companies be nationalised to control bills? – YOU VOTED