The only time that all 14 of Lucian Freud’s acknowledged offspring ever encountered each other was, reputedly, at the celebrated artist’s funeral in 2011.

A similar, sombre gathering had seemed possible next week when the family bids farewell to Jane McAdam Freud, the first of the siblings to die.

But I can reveal any hope of that is over — extinguished on Thursday night by an extraordinary punch-up in a London pub which has left one of Freud’s five sons on the cusp of reporting his brother to the police.

Yet there had been no inkling of flying fists when Alex Boyt — Freud’s only son by Suzy Boyt — got talking to painter Paul McAdam Freud, the elder of Freud’s two sons by Katherine McAdam and brother of sculptress Jane, whose death, aged 64, I disclosed earlier this month. 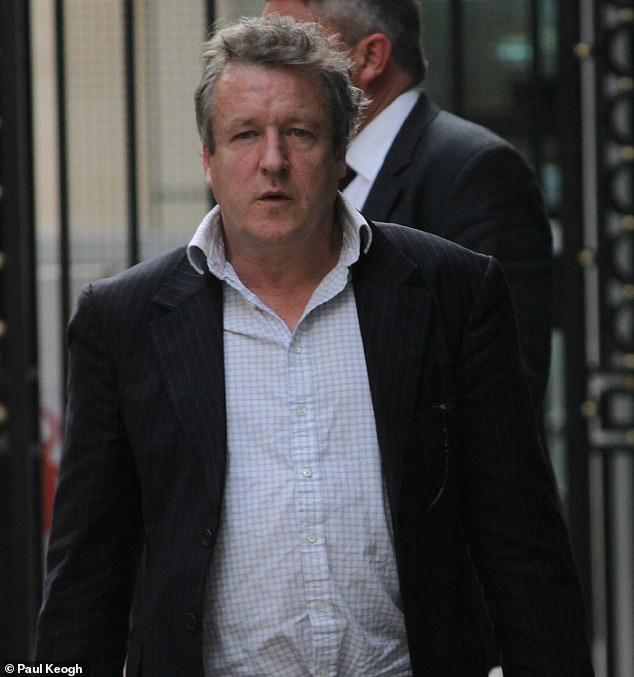 ‘They were standing close to the door, chatting very amicably,’ recalls an eyewitness at the Royal Exchange pub in Paddington, where Thursday nights have become newly fashionable, thanks to Paul Simenon, bassist for punk band The Clash.

‘There’s a DJ set by Simenon every Thursday which attracts a bohemian crowd reliving their youth,’ explains my informant, adding that Bella Freud — one of Freud’s daughters by publican’s daughter Bernardine Coverley — is a Thursday regular.

This time, though, the family contingent was just the two half-brothers – Alex ‘in a blazer and cream coloured cords and loafers’ and Paul, ‘about 5ft 10in and stockier’, wearing ‘a pork pie hat and a rather loud shirt’.

There was no doubting the men’s blood ties. ‘There’s a striking similarity in the nose and face,’ adds the witness, who explains that the mood changed suddenly and explosively when Paul asked Alex if he would be attending Jane’s funeral. 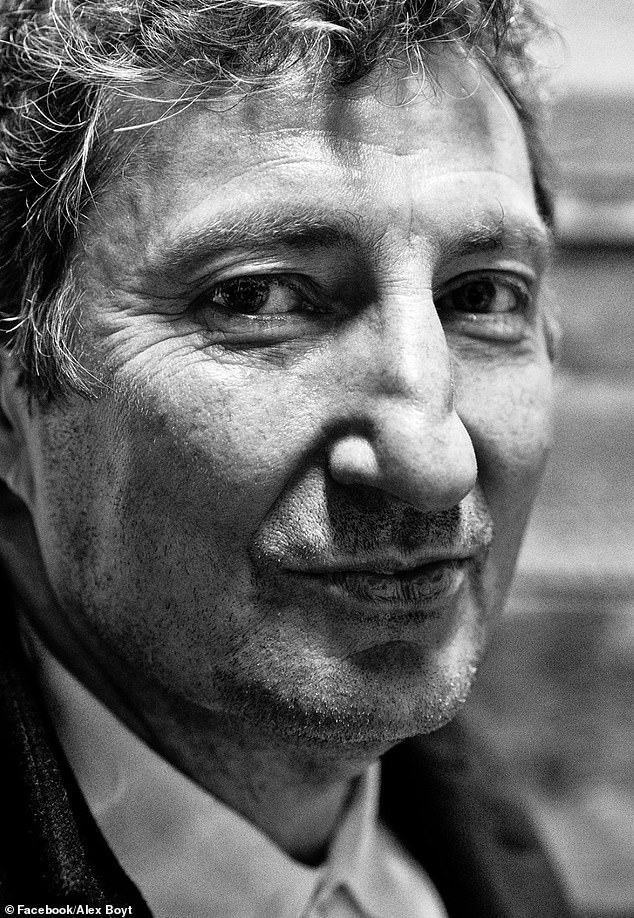 Alex Boyt  (pictured) — Freud’s only son by Suzy Boyt. Alex, who tells me he hadn’t seen Paul ‘for years’, crisply summarises the encounter. ‘Out of the blue he punched me then disappeared. [I] might go to the police, might not’

He didn’t have the chance to say anything else. ‘Paul punched him — a right to his left jaw — so hard he flew out through the pub door. He would have been knocked to the ground if it hadn’t been for the crowd drinking outside.’

Alex, who tells me he hadn’t seen Paul ‘for years’, crisply summarises the encounter. ‘Out of the blue he punched me then disappeared. [I] might go to the police, might not.’ 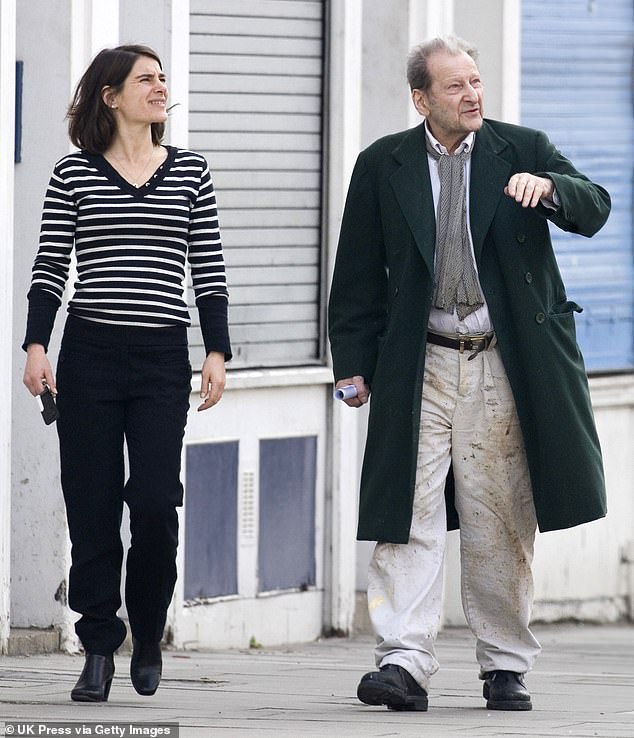 Paul declines to comment. In common with all Freud’s children by McAdam, he was omitted from his father’s £42 million will.

But he’s evidently inherited a pugilistic streak from Lucian, who once remarked that he had ‘a lot of fights’ because ‘people said things to me to which I felt the only reply was to hit them’.

Sealed with a kiss: Lord’s girl to wed ‘snob’ Hetty

As the daughter of Le Mans winner Johnny Dumfries, Lady Caroline Crichton-Stuart knows a thing or two about champagne celebrations.

And she has something special planned for her own wedding. Lady Caroline, 37, is to marry artist and model Hetty Douglas, 31, who describes herself as a ‘London-based lesbian painter’. 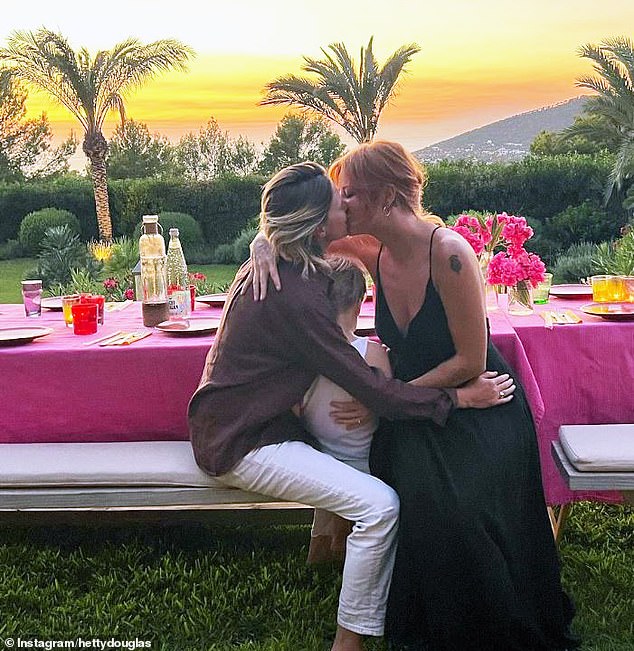 Lady Caroline, 37, is to marry artist and model Hetty Douglas, 31, who describes herself as a ‘London-based lesbian painter’. ‘She said yes!’ gushes Hetty. Her fiancee declares: ‘Get ready for a big gay wedding.’

Hetty proposed on the Spanish party island of Ibiza, while they were on holiday with model Cara Delevingne last weekend. ‘She said yes!’ gushes Hetty. Her fiancee declares: ‘Get ready for a big gay wedding.’

It will be a welcome celebration for Lady Caroline, whose father, the 7th Marquess of Bute, died last year aged 62.

Hetty caused a social media storm in 2017 by mocking scaffolders in a McDonald’s by suggesting they only managed ‘one GCSE’ between them.

After Hetty was branded a ‘snob’ online, a friend claimed she had been reacting to the construction workers verbally abusing restaurant staff.

Angela Hicks’s father, Ashley, is the godson of Prince Philip and her great-grandfather was the 1st Earl Mountbatten of Burma, but she’s not too grand to take the mickey. 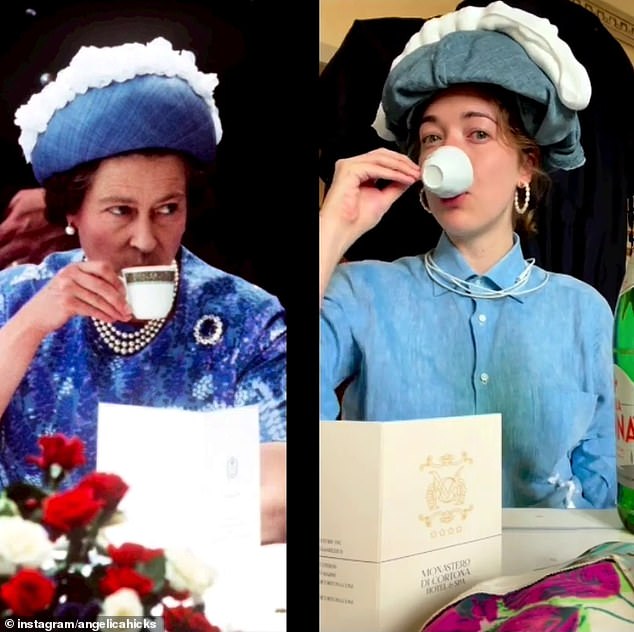 In a video, far right, she recreates an outfit worn by the Queen during a Silver Jubilee visit to Northern Ireland in 1977. University College London graduate Angelica uses a cushion cover on top of a fruit bowl, covered in shaving foam, to imitate Her Majesty’s striking hat.

‘I really try to not buy stuff, because that’s part of the comedy for me.’

Donna’s family holiday with ‘the Airspinalls’

Many people would go to the ends of the earth to avoid bumping into an ex, but Donna Air has gone on holiday with hers.

The actress, 43, is in the Bahamas with casino and wildlife park heir Damian Aspinall, 62, from whom she broke up in 2007. 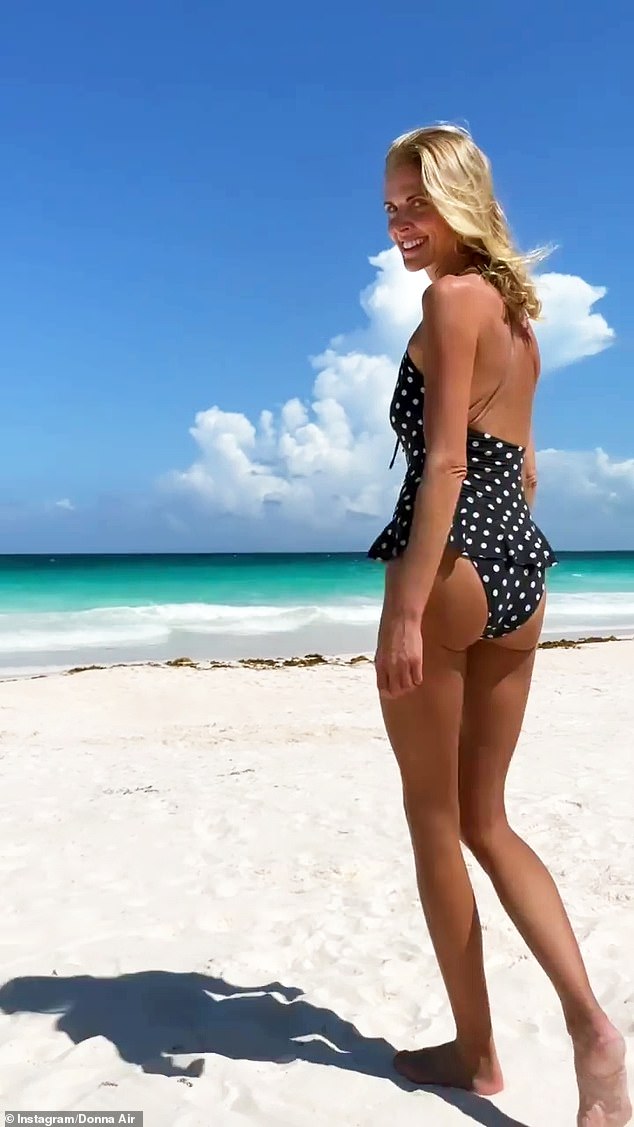 Actress Donna Air, 43, is in the Bahamas with casino and wildlife park heir Damian Aspinall, 62, from whom she broke up in 2007.

And so swimmingly are they getting on that she’s suggested they should create a portmanteau of their surnames.

‘Meet the Airspinalls,’ she says, next to this picture of her and Damian, below, heading to a Harbour Island beach with their daughter, Freya, 18.

Former Byker Grove star Donna fell in love with Damian after they were introduced in 2000 by mutual pal, Tara Palmer Tomkinson, who died in 2017 aged 45. 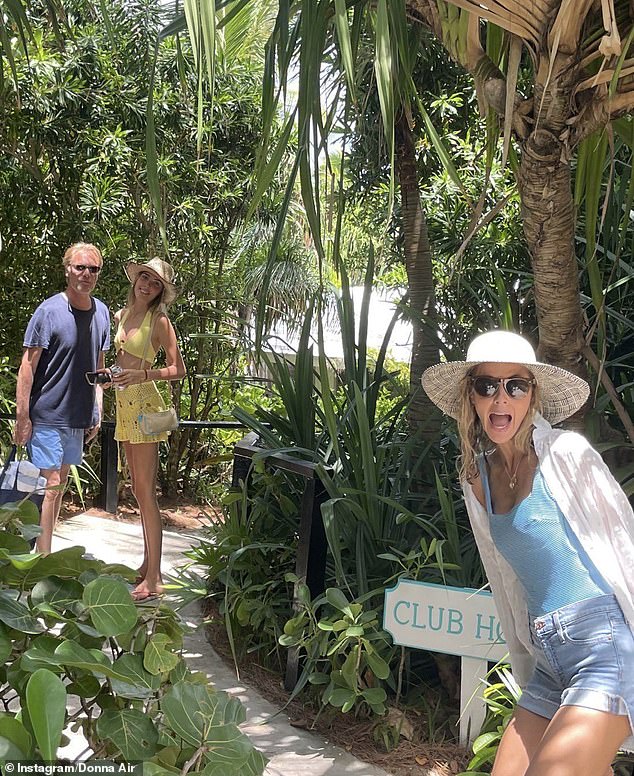 ‘Meet the Airspinalls,’ she says, next to this picture of her and Damian, below, heading to a Harbour Island beach with their daughter, Freya, 18

Donna, who used to go out with the Duchess of Cambridge’s brother James Middleton, is seeing businessman Ashley Smatt.

He divorced Julia Sebag-Montefiore in 2002.

Tragic Darius was to star as Caesar

Much-loved singer and actor Darius Campbell Danesh, who was laid to rest in Glasgow on Thursday, was planning a sensational return to the West End stage.

I can reveal that the former Pop Idol contestant, 41, who was found unresponsive in a flat in the U.S. earlier this month, had been invited to star as Julius Caesar in lavish new musical Cleopatra.

‘I wanted him to play the male lead because of his tremendous talent and presence on stage — and that powerful voice,’ his friend Rawaa Barnes tells me.

‘I could think of no one else who could capture the charisma and majesty of Caesar, who could charm anyone.’

Rawaa, who lives in Chelsea with her banker husband Nicholas Duffy, has written the libretto and score for Cleopatra.

She adds of Darius: ‘They don’t make them like that any more. Handsome and 6ft 4in, he was perfect for the role and was very much looking forward to returning to the London stage.’

Kit’s costs go through the roof…

Still only 35, Kit Harington is worried about looking threadbare on top. But, lest fans of the Game Of Thrones star gasp in horror, I can offer immediate reassurance. 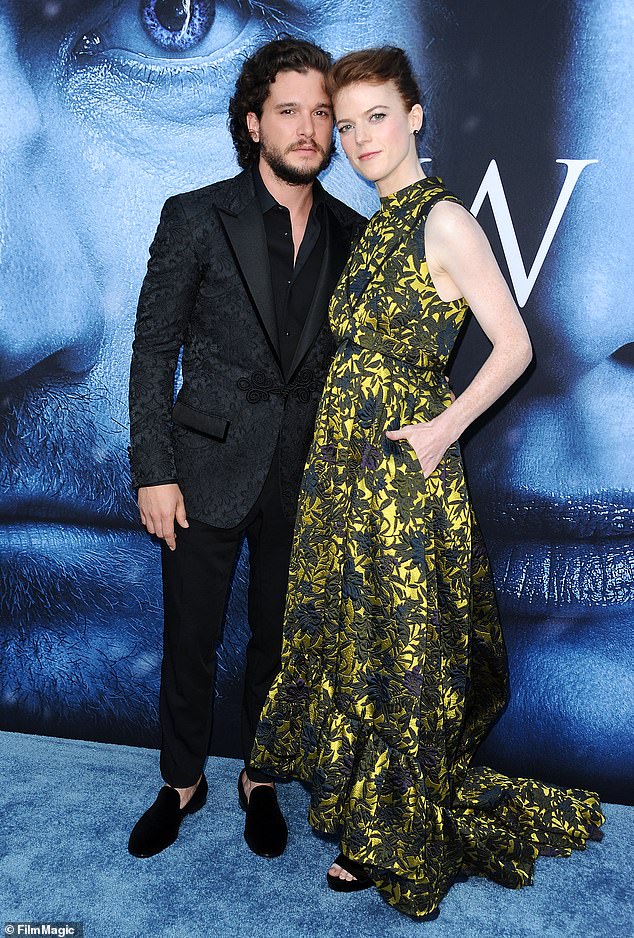 It isn’t Harington’s luxuriant curls giving him cause for concern, but the ageing thatch on the Grade II 15th-century Suffolk farmhouse which he and his wife, Thrones co-star Rose Leslie (right), snapped up for £1.75million in 2017

It isn’t Harington’s luxuriant curls giving him cause for concern, but the ageing thatch on the Grade II 15th-century Suffolk farmhouse which he and his wife, Thrones co-star Rose Leslie, snapped up for £1.75million in 2017.

‘All areas of roof-covering require repair and replacement,’ advise the thatchers who will rectify matters.

Baronet’s son Harington and Rose are certainly learning about the challenges of country life.

Last year they applied for permission to install two 6ft solid oak gates to deter locals from peering in, inspired not by ‘the architectural and historic merits of the building,’ noted their planning agent, but by ‘an unwelcome desire to observe the occupants.’ 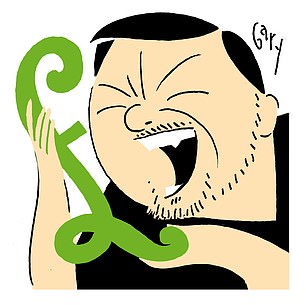 Ricky Gervais is laughing all the way to the bank. I can reveal one of the businesses owned by the star of The Office and After Life made a £4million profit last year.

Newly published accounts for Derek Productions reveal the huge sum, while another of his companies, Red Lion 99, made £850,000.

Between them, these two firms held £11.2million as at November last year.

How the Slough branch of Wernham Hogg Paper Merchants would covet such figures!