Edward VIII ‘was given allowance by George’ says commentator

Her Majesty marked 70 years on the throne last month, an unprecedented anniversary for a British monarch. Celebrations for the remarkable feat will take place throughout the year, culminating in a four-day Bank Holiday weekend in June. The four days of celebrations will include a number of public events and community activities, including Trooping the Colour, a special live concert from Buckingham Palace and The Big Jubilee Lunch.

Yet, if the Duke and Duchess of Windsor had their way, this anniversary may never have happened.

Christopher Wilson, author of a number of royal biographies, revealed in 2009 that the exiled Duke and Duchess hatched a plan to change the course of British history.

The former King Edward VIII famously abdicated the throne in 1936 to marry American divorcee Wallis Simpson, and the pair were effectively exiled from the UK.

Yet, Mr Wilson told The Telegraph, they had deeply ambitious thoughts to return in the spring of 1946 with King George VI’s health beginning to deteriorate. 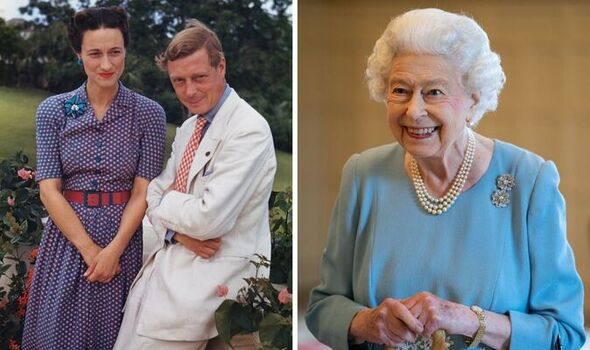 The plot reached its height in 1949, when Mr Wilson said there was a “heavy bias” against the then-Princess Elizabeth becoming Queen because of the “Mountbatten influence” — the combined force of Lord Mountbatten and his nephew Prince Philip of Greece, entitled the Duke of Edinburgh by this point.

A letter between the Duke and Duchess of Windsor and Kenneth de Courcy, a Windsor confidante, saw a plot emerge that would have them return to Britain, buy an estate, and wait for others to suggest he become King once again.

The first written evidence of the plot was dated March 19, 1946 and referred to “the subject we discussed in Paris”.

The Duchess was in on the plot too, and knew of his desire to return to public life.

The Duke and Duchess were effectively exiled upon abdication. (Image: GETTY)

A letter to Mr de Courcy, seen by Mr Wilson, spoke of the Duchess’ desire to not “see the Duke of Windsor wasted”.

By the spring of 1949, the plot had thickened significantly.

Mr de Courcy wrote to the Duchess, saying: “The King is gravely ill and out of circulation and he will not be in circulation again… the King faces the fearful tragedy of losing first one leg then the other… The King will be able to do extremely little and moreover that those around him will gain greater and greater power.

“I may tell you most confidentially that a Regency has already been discussed and it seems likely enough that presently [a Regent] will be appointed.”

The situation, in Mr de Courcy’s eyes, mirrored that of King George III years of illness, during which he was king in name but incapable of doing the job.

Mr de Courcy suggested a Regency “primarily influenced by the Mountbattens” could be “fatal” for The Firm.

Mr Wilson said Mr de Courcy “painted the bleakest possible picture of the Sovereign’s health” to prompt the Duchess of his plot.

He wrote: “The King is suffering from a grievous malady which is incurable, it has spread over his whole body and the result is the blood does not flow freely through the arteries… I am told on the highest medical authority that the King faces… the fearful tragedy of losing first one leg and then the other within two or three years.”

Edward and his wife enjoyed a party lifestyle over in France upon their exile. (Image: GETTY)

Mr de Courcy sought to encourage the Duke and Duchess to return, since it might endorse his future candidature if George VI was considered incapable of carrying out his duties.

He wrote: “[The Duke] could, in these difficult circumstances be a decisive influence for good – making it absolutely impossible for the Mountbattens to become the decisive political and social influence upon the Regency and the future Monarch.

He continued: “I should like to see you and the Duke buy an agricultural property somewhere near London and the Duke devote a good deal of his time to experimental farming on the most advanced modern lines.

“This would make a great appeal to the country…

“Your property here ought to be sufficiently near London to make it possible for people to drive down for dinner, etc, and the [guest] lists should be most carefully considered…

“I venture to say that if this advice were followed, the results would be remarkable.”

The Duke dithered, and Princess Elizabeth took on more royal duties as her father’s health deteriorated.

George VI made a recovery of sorts, “walking with death” as Winston Churchill famously described it, until February 6, 1952 when he took his final breath.

By this point, the Duke and Duchess were splitting their time between Paris and New York, hosting lavish parties and doting on the pugs they kept.

They failed to attend the coronation of Queen Elizabeth II, insteading watching on television in Paris.

The Royal Family never truly accepted the Duchess, and the pair declined to attend Prince Charles’ investiture in 1969, saying the Prince of Wales would not want his “aged great-uncle” there.

The Duke died on May 28, 1972, having been diagnosed with throat cancer the previous year. The Duchess died in 1986, and was buried alongside her husband in the Royal Burial Ground.

'We should look at a UK-wide referendum!' Brits 'fed up' with Sturgeon wanting Indyref2