Emily Atack slams 'perverts' who have been 'bombarding' her with messages

The Inbetweeners star, 32, took to her Instagram Story on Sunday to share that an image of her was circulating on Fake Taxi – an explicit site where men have sex with women in the back of cabs. 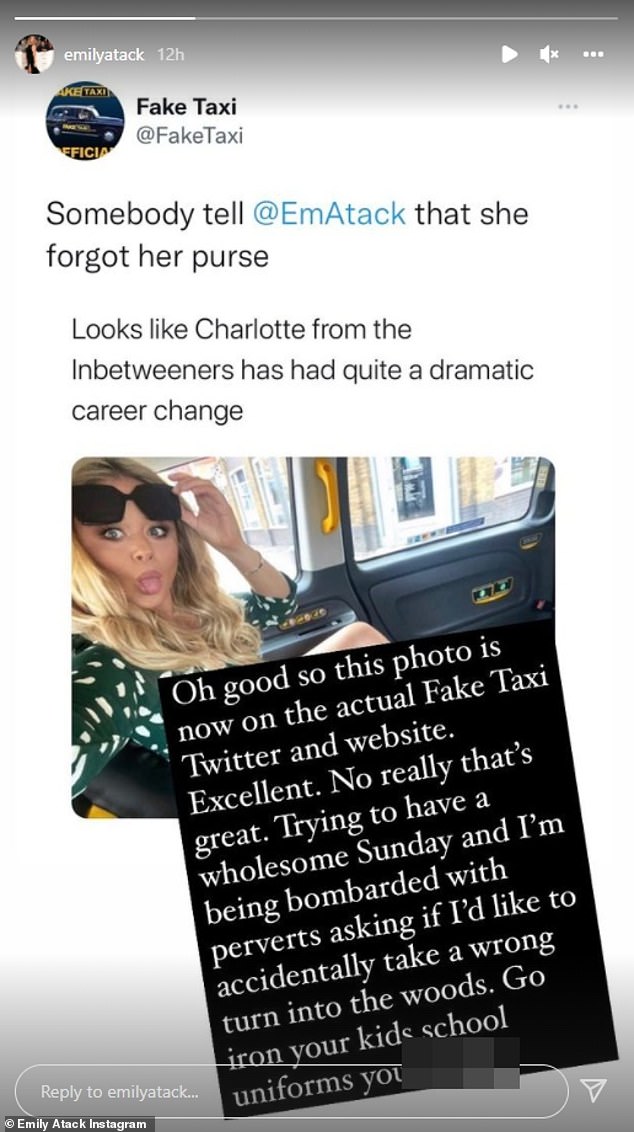 She wrote on social media on Sunday: ‘Oh good so this photo is now on the actual Fake Taxi Twitter and website.

‘Excellent, No really that’s great. Trying to have a wholesome Sunday and I’m being bombarded with perverts asking if I’d like to accidentally take a wrong turn into the woods.

The photo shows Emily sitting in the back of a black cab wearing a green mini dress, as she playfully sticks out her tongue. 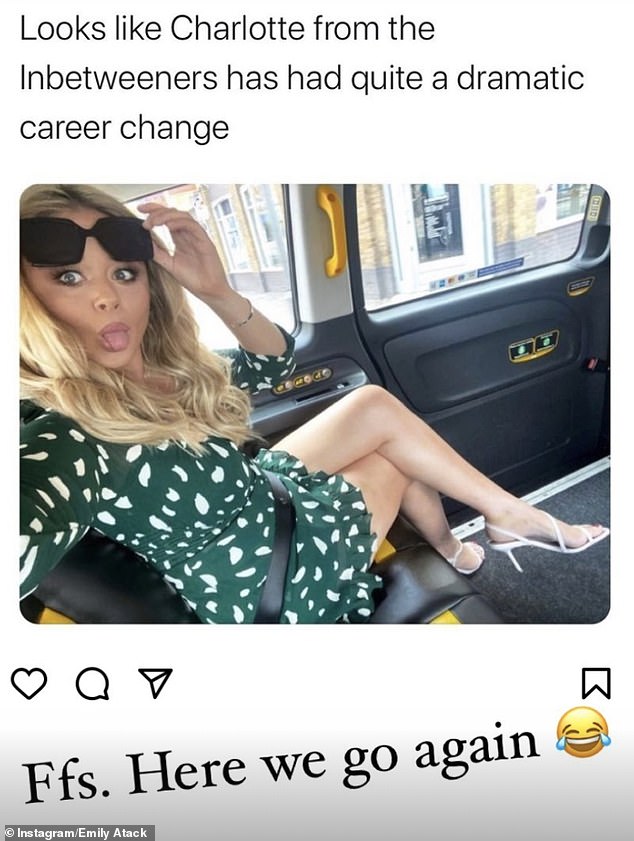 An Instagram page shared the snap and wrote alongside it: ‘Looks like Charlotte from The Inbetweeners has had quite a dramatic career change.’

Snapping back at the trolls, Emily posted the comments on her Instagram stories on Thursday and said: ‘Ffs. Here we go again.’

In a follow-up post, the stand-up comedian shared a screenshot of one comment which aimed to clarify the crude meaning behind the meme. 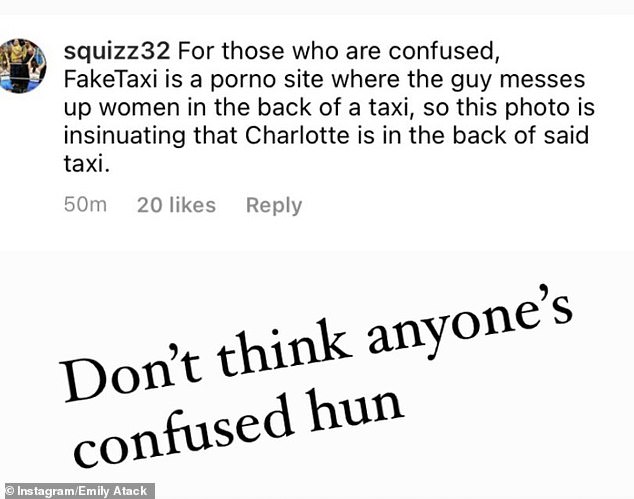 Clapping back: The stand-up comedian shared a screenshot of comment which aimed to clarify the meaning behind the cruel meme and said ‘don’t think anyone’s confused hun’ 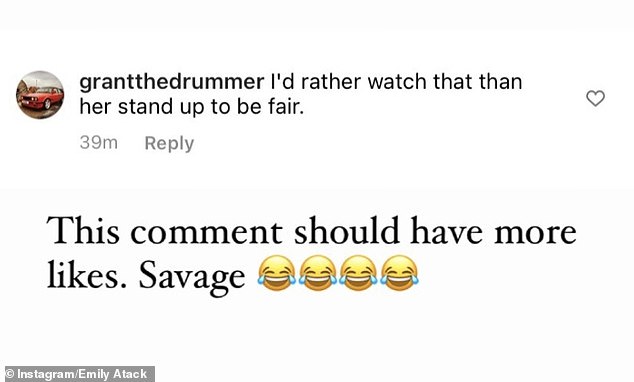 Defiant: Emily brushed off the harsh comments as she quipped on her stories: ‘This comment should have more likes. Savage’

Another troll commented on the meme: ‘I’d rather watch that than her stand-up to be fair.’

But Emily brushed off the harsh comment as she quipped: ‘This comment should have more likes. Savage.’

Nasty: Just last month, the actress came under fire by trolls who branded her an ‘alcoholic’ and asked if she was ‘expecting a baby’

Just last month, the actress was targeted by trolls who branded her an ‘alcoholic’ and asked if she was ‘expecting a baby’.

She took to her Instagram stories at the time as she shared a cruel message she received in response to a mirror selfie.

The blonde beauty subtly hit back at the comments as she shared another stunning photo and defiantly enjoyed a glass of wine.

Earlier in the day, Emily looked effortlessly stylish as she showcased her chic laid back outfit. 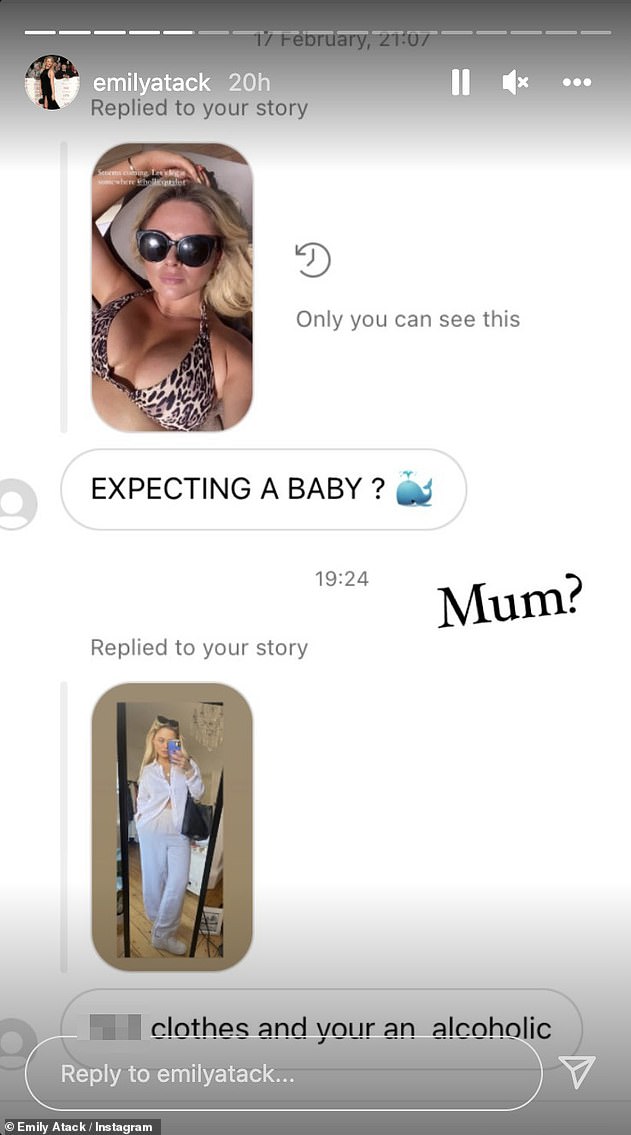 Hitting back: In response to the mirror shot, a cruel troll penned: ‘S*** clothes and you’re an alcoholic’

She teamed a pair of linen trousers with a matching white shirt that she left partially unbuttoned with some Nike trainers.

Her blonde locks were held back off her face with some circular framed black sunglasses as she displayed her natural beauty with minimal makeup.

In response to the mirror shot, a cruel troll penned: ‘S*** clothes and you’re an alcoholic.’

Weeks before the same user also replied to an incredible bikini photo with: ‘Expecting a baby?’ alongside a whale emoji.

She frequently shares messages from online trolls and has previously took to her Story after a follower branded her a ‘fat munter’ with a pig emoji.

Seeing the funny side of the vile message, the blonde beauty joked about the use of the word munter, writing: ‘Great to see the word ‘Munter’ making a comeback’.

She paired her caption on the screenshot with a duo of heart eye emojis, in a true mark of her dismissal at the hater.

Emily has spoken about trolls commenting on her weight previously.

She spoke with The Sun about how she deals with unsolicited comments on her figure, saying: ‘I don’t think there’s any way you deal with it, it upsets me, but not for long, I’ll talk about something else five minutes later.’

‘If someone comments on something on social media that upsets me, say about my weight, I go: ‘That’s upsetting,’ and then I just move on.’ 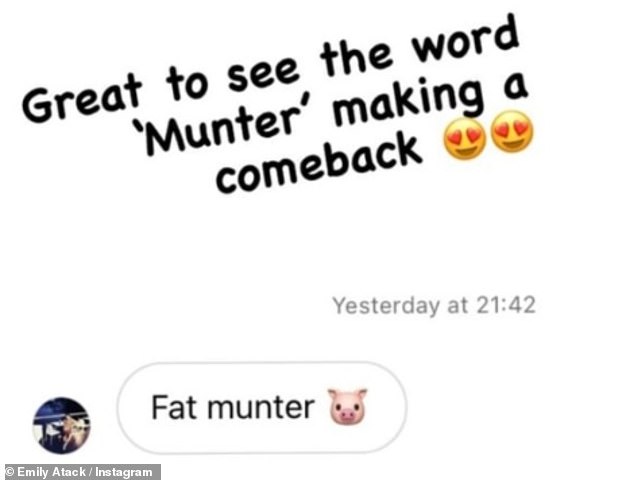 Shock: The Inbetweeners star frequently shares messages from online trolls and has previously took to her stories after a follower branded her a ‘fat munter’