Paws-itively cheeky! Emily Ratajkowski bares her bottom in NAKED snap with her dog Columbo as they both share they same pose laid out on a rug

She’s certainly never been shy when it comes to showing off her supermodel looks, and Friday morning was no exception for Emily Ratajkowski.

The American actress gave her 29.4million followers a very rude awakening as she posed completely naked while laying across a rug alongside her dog Columbo.

There appeared to be no rhyme or reason for the photo, which the 31-year-old simply captioned: ‘baby boy bumbi.’ 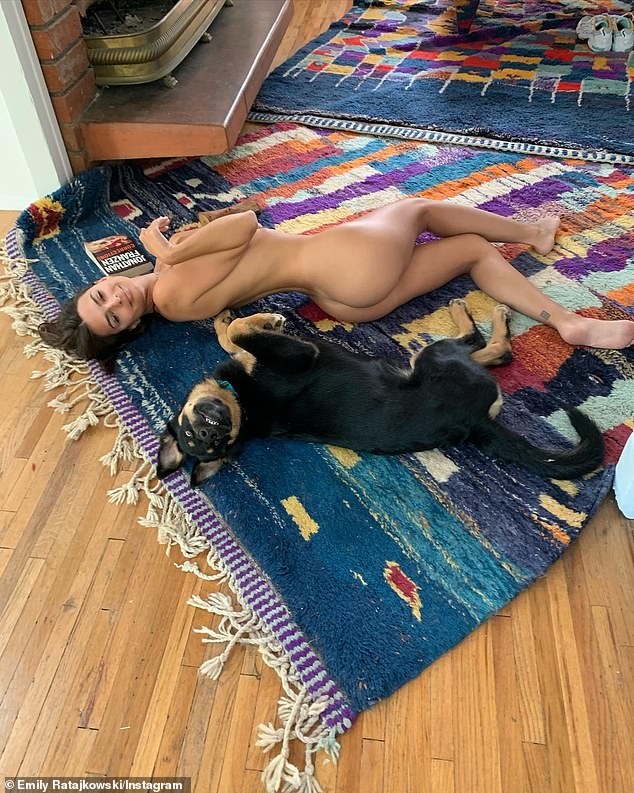 Friends fur-ever: Emily Ratajkowski bares her bottom in NAKED snap with her dog Columbo as they both share they same pose laid out on a rug

The cheeky snap showcased her bare bottom as she mirrored the same pose as her pooch, who had his paws up while spread out across the floor.

A pair of white trainers with socks in them could be seen in the corner of the photo, presumably where Emily had just stripped off.

The Corrections, a novel by Jonathan Franzen, could also be seen next to the model, which is a sprawling tale about the diaspora of the modern American family.

Her husband, film producer Sebastian Bear-McClard, was not pictured – though it is quite possible that he was responsible for taking the racy snap.

The pair – who were married in 2018 – keep a relatively low profile as a couple, rarely posting about one another on social media.

However, they are often spotted together around New York City where they reside, accompanied by their fur baby Columbo.

Emily has been making plenty of travel plans lately, after she spent some time enjoying the stunning beaches of Tulum, Mexico, earlier in June.

Her vacation south of the border came shortly after she traveled to France for the Cannes Film Festival, where she looked glamorous on the red carpet for David Cronenberg’s comeback film Crimes Of The Future.

Missing from her outing on Thursday was her film producer husband Sebastian Bear-McClard whom she married in February 2018.

On March 8, 2021, Emily and Sebastian welcomed a son named Sylvester.