A tweet is worth a thousand words? Emily Ratajkowski LIKES post about her husband Sebastian Bear-McClard’s ‘serial cheating’ – fueling reports their divorce was sparked by his infidelity

By Nola Ojomu For Dailymail.Com

Emily Ratajkowski appears to be letting her Twitter reveal her true feelings about estranged husband Sebastian Bear-McClard as the model has been ‘liking’ tweets about what caused her marriage to end.

The 31-year-old’s social media activity comes after it was revealed that she and husband Sebastian, 41, have split after a four-year marriage amid claims the producer is a ‘serial cheater.’

Though Emily is yet to release an official statement about the reason for the split, she chose to like a tweet which specifically mentioned her estranged partner’s alleged infidelity. 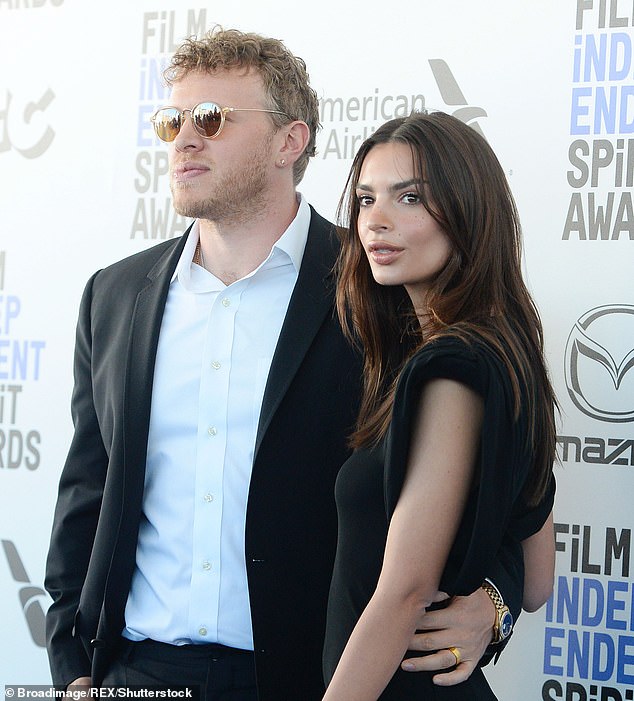 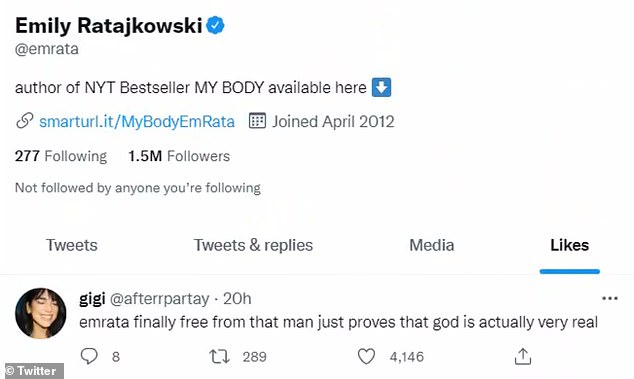 Good riddance:  The model’s, 31, social media activity comes after it was revealed that she and husband Sebastian, 41, have split after a four-year marriage

‘can’t believe that little b***h cheated on emrata,’ one furious fan tweeted, which received a like from the Inamorata designer.

Another tweet stated: ‘Girls, how are we celebrating Emrata’s divorce’.

While Emily liked a third comment which read: ’emrata finally free from that man just proves that god is actually very real.’

It was reported last week that the fashion star made the decision to leave her film producer husband following the claims of his infidelity, but is believed to be coping well. 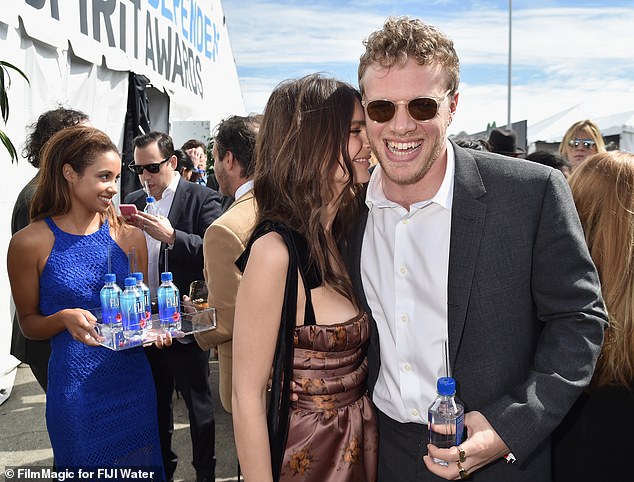 Happier times: Emily and Sebastian are yet to release an official statement about their marriage split – pictured in 2018 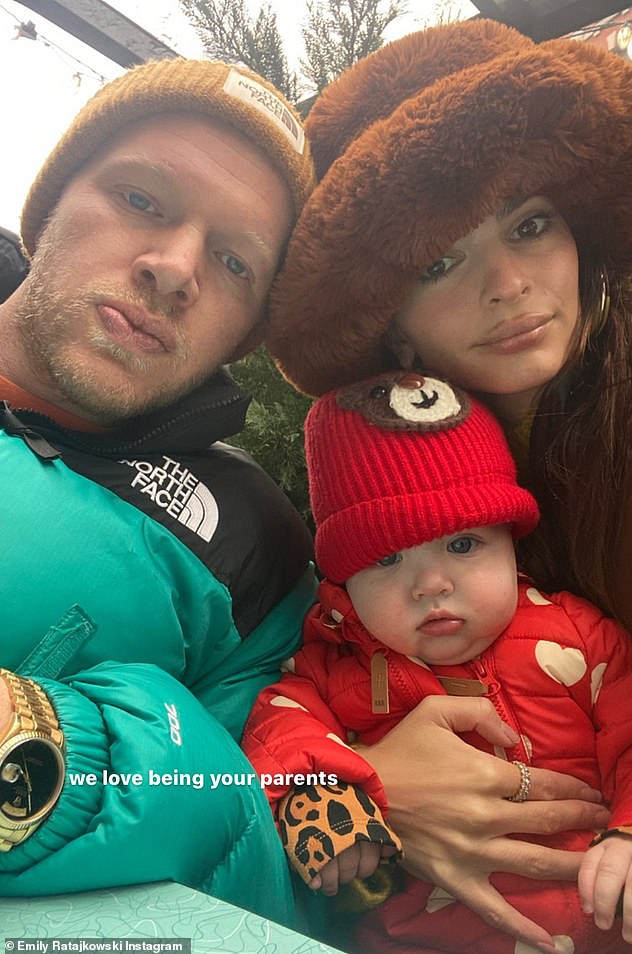 Her focus: Emily was reportedly the one who made the decision to leave her husband, and is now focusing on the couple’s son Sylvester, 16 months

A source close to the star confirmed the news to PEOPLE, and said Emily is focusing on parenting the couple’s son Sylvester, 16 months.

They said: ‘They split recently. It was Em’s decision. She is doing okay. She is strong and focused on her son. She loves being a mom.’

The unnamed source also said Ratajkowski plans to file for divorce, but paperwork has not yet been filed.

The pair’s split comes after a source told Page Six that Sebastian has been a ‘serial cheater’, saying: ‘Yeah, he cheated. He’s a serial cheater. It’s gross. He’s a dog.’ 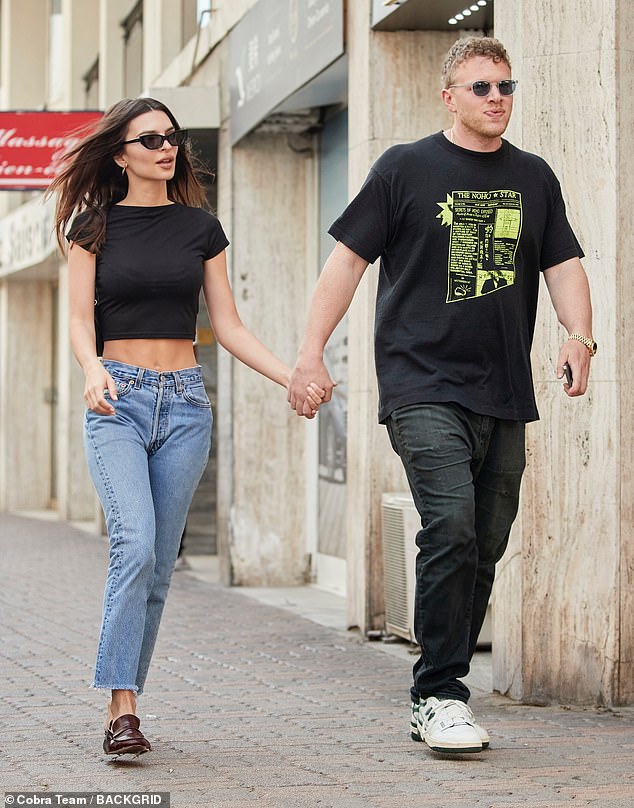 Moving on: The couple were last spotted together in mid-June while on vacation in Italy – pictured in France in May

Rumors of a rift first began when the fashionista started appearing without her wedding ring, and did not post any public Father’s Day wishes to her husband of four years last month.

The Inamorata founder and Sebastian first started dating on Valentine’s Day in 2018, and just a few weeks later, they were married during a civil ceremony in New York City on February 23, 2018, with just a few friends as witnesses.

Two and half years later the couple announced they were expecting a baby. They welcomed their son into the world on March 8, 2021.

Feb 13, 2018: Emily and Sebastian make their first public appearance as a couple after being in the same friend group for years.

April 2018: Emily shares their proposal story, revealing he proposed in Minetta Tavern and made a ring out of the paper clip from their bill.

Feb 2019: The model pays tribute to their one-year anniversary by showing off her real two-stone engagement ring and wedding band.

March 2019: Sebastian becomes embroiled in a real estate scandal with his landlord claiming he owed $120,000 in rent and Emily came to his defense.

May 2019: The two become dog parents to an adorable Husky-German Shepherd named Colombo.

Oct 2020: Emily reveals that she and Sebastian are expecting their first child together.

June 2022: Emily and Sebastian’s last sighting together soaking up sun on the beach in Porto Ercole, Italy.