Emily Ratajkowski flaunted her stunning figure in a muted floral top and matching skirt on Instagram on Monday.

The 31-year-old model and essayist put on a busty display in a tan bustier-style top that showed off a bit of a tan line she had developed while vacationing on the beach.

She tagged the fashion brand Miaou, which produced her ensemble, along with its designer Alexia Elkaim and the plus-size model Paloma Elsesser. 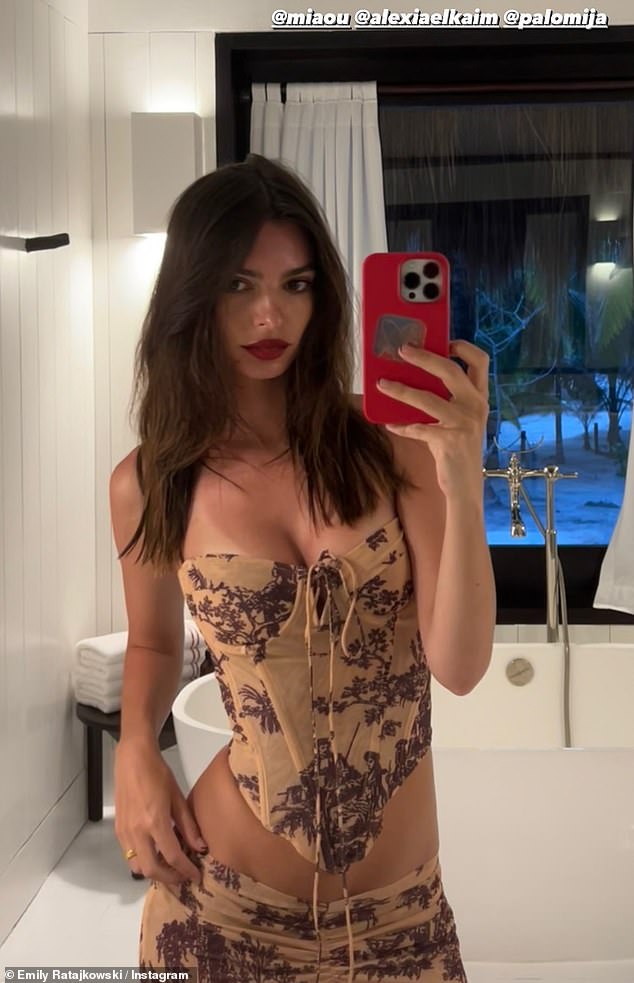 The top and matching skirt appeared to be from the Paloma Elsesser x Miaou collection, which has several similar tops that cost around $245–285.

Her low-rise skirt was ruched in front and featured a similar tan-and-brown floral pattern. Similar designs cost around $165 on the brand’s website.

Emily’s top featured defined cups and ribs culminating in a V-shape, which strings dangling down from her bust.

The Gone Girl actress stood out with a splash of crimson across her plump lips, and she wore her brunette locks with a middle part as they rested across her chest.

She appeared to be snapping a mirror selfie in a hotel bathroom, with the bathtub behind her and an opening window revealing sand and palm trees behind her. 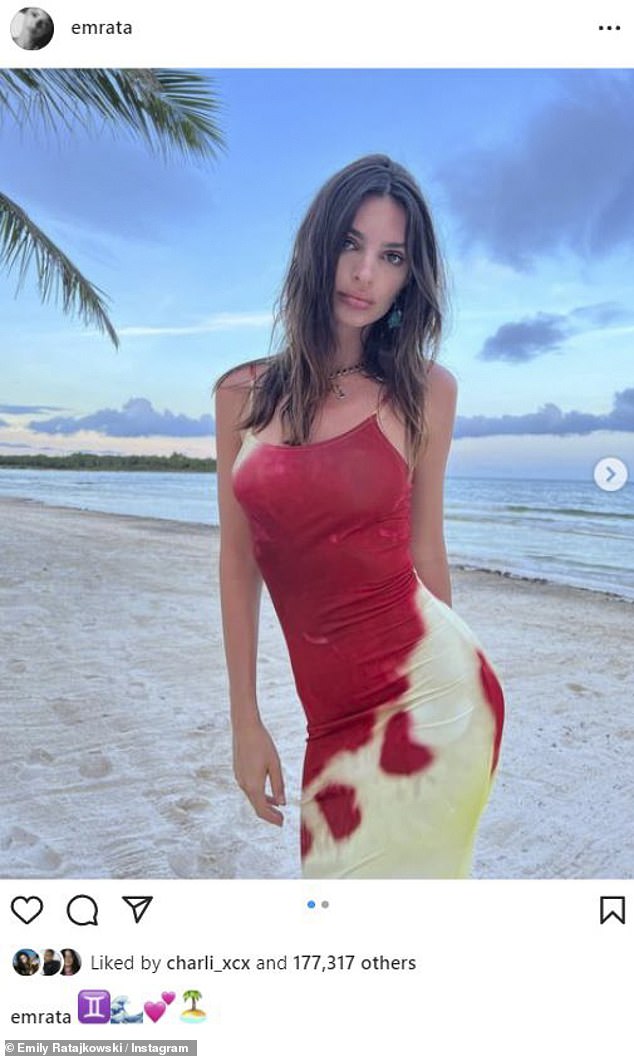 Red hot: Emily, who appeared to be vacationing in a tropical local, earlier posted photos of herself in a tie dye red-and-white dress while showing off a bit of a sunburn 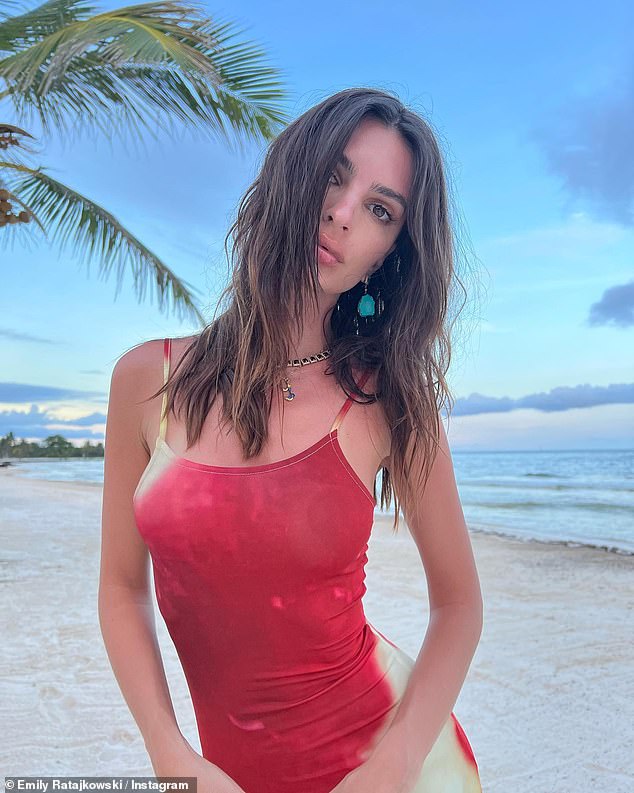 Gone in the blink of an eye: The look hugged her curves, but she quickly deleted the post

Earlier on Monday, Emily showed off a brighter red-and-white tie dye–style dress, which appeared to account for her tan lines in the subsequent Insta Stories post.

The bodycon dress featured slim straps and a more modest neckline. She accessorized with a gold segmented necklace, and she wore her dark hair in somewhat messy strands across her shoulders.

She also contrasted the red-and-white dress with a set of blue earrings, and she appeared to have developed a bit of a sunburn.

The Blurred Lines star posed on a beach with gorgeous white sand, and she simply captioned the post — which was subsequently deleted — with wave and palm tree emojis. 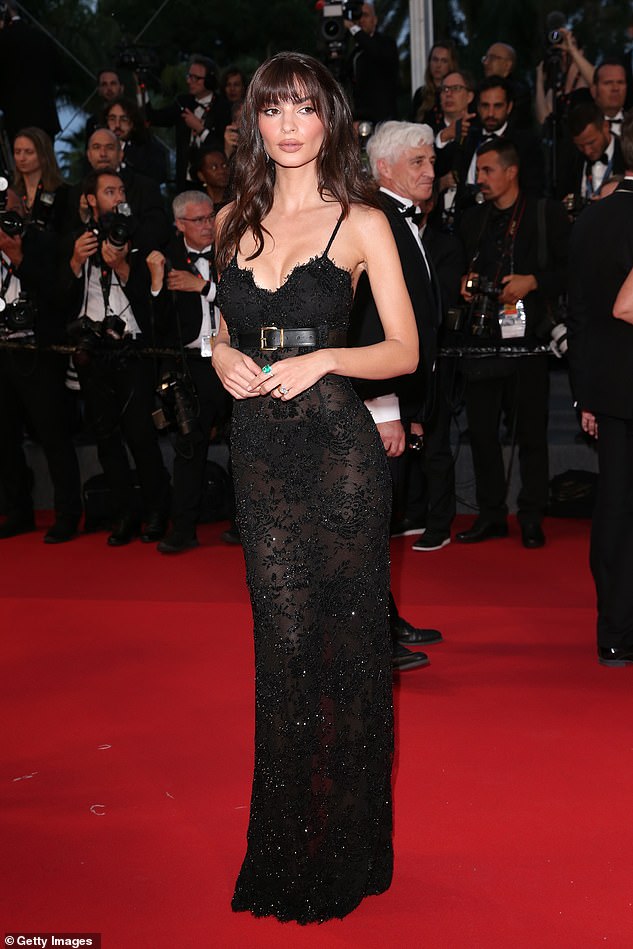 Glamorous: Although the catwalk star didn’t specify where she was vacation, she was enjoying the pristine climate of the French Riviera late last month for the Cannes Film Festival

Although the catwalk star didn’t specify where she was vacation, she was enjoying the pristine climate of the French Riviera late last month for the Cannes Film Festival.

The mother of one-year-old son Sylvester highlighted her stunning figure in a semi-sheer black lace Miu Miu dress decorated with black beads as she attended a screening of David Cronenberg’s comeback film Crimes Of The Future, which stars Viggo Mortenson, Léa Seydoux and Kristen Stewart.

Following the festival appearance, she and her husband Sebastian Bear-McClard returned home to New York City, though she has apparently jetted off again to a more tropical locale. 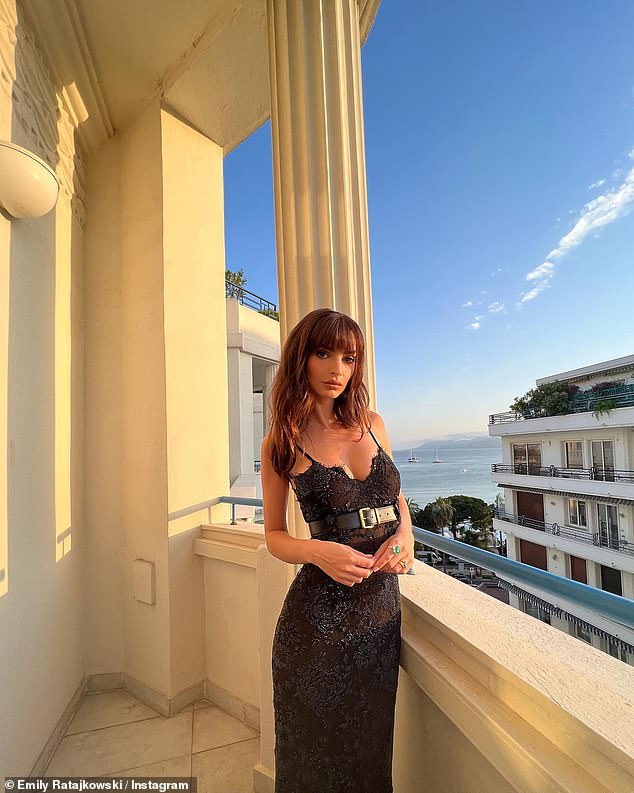 Back in black: She showed off in a glamorous semi-sheer black Miu Miu dress while attending a screening of David Cronenberg’s film Crimes Of The Future