Emma Thompson and Lashana Lynch looked in good spirits as they joined co-star Alisha Weir at the premiere of Matilda The Musical at the Royal Festival Hall as part of the BFI London Film Festival on Wednesday.

The actress, 63, who plays Miss Trunchbull in the film, cut a stylish figure as she walked the red carpet alongside her fellow co-stars.

Emma donned a beige leather jacket for the evening with a tassel detail which she wore with black trousers.

The film star also sported a white printed T-shirt and added height to her frame with a pair of black leather boots.

Emma, who completed her look with dark brown earrings, grinned from ear-to-ear as she was greeted by hundreds of fans who lined the red carpet.

Alisha, who plays the lead role of Matilda in the flick, was joined on the red carpet by actor Stephen Graham who plays her father Mr. Wormwood.

The Irish actress sported a white dress with a pleated hemline and a baby blue waist strap. 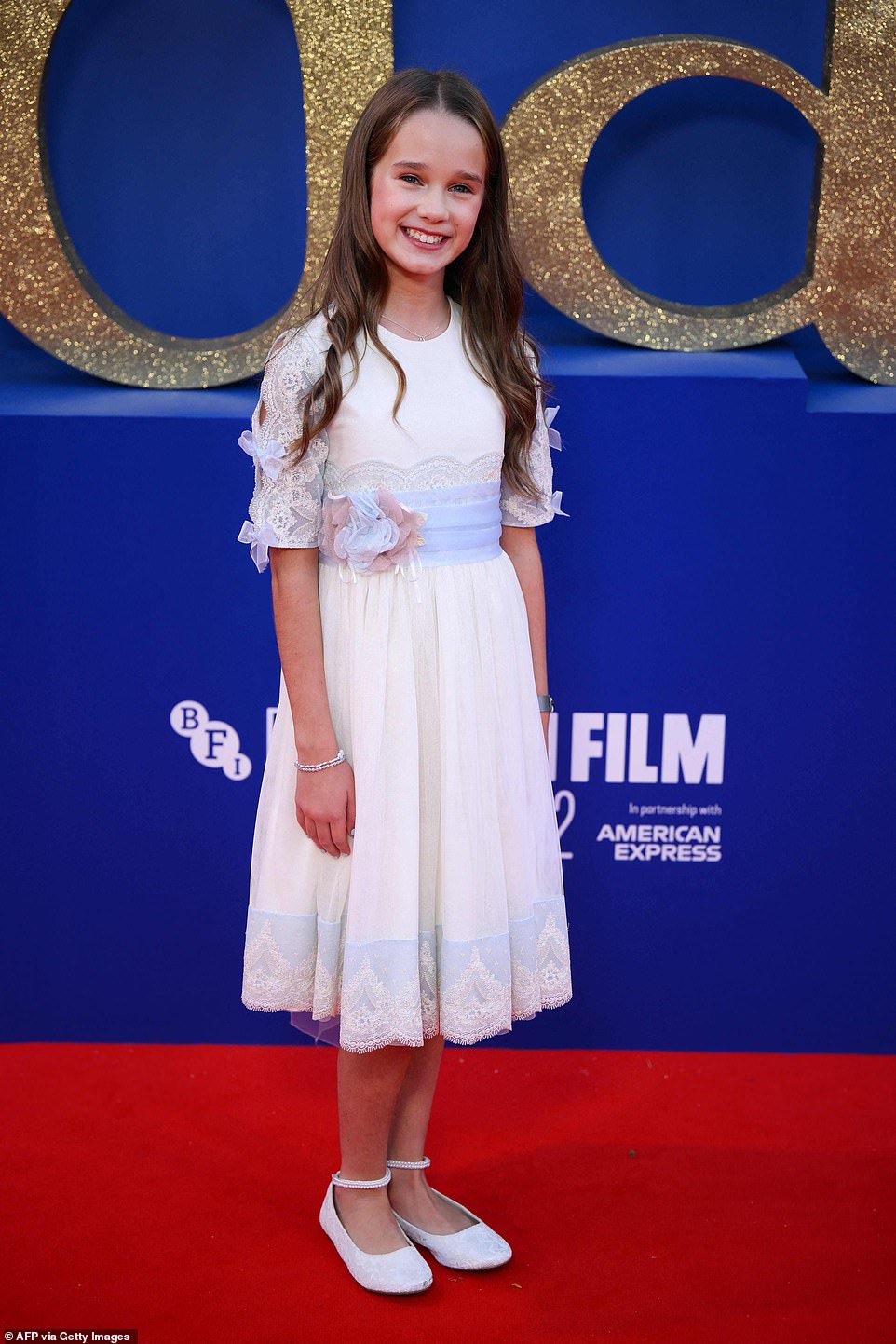 Big screen debut: Alisha, who plays the lead role of Matilda in the flick, sported a white dress with a pleated hemline and a baby blue waist strap 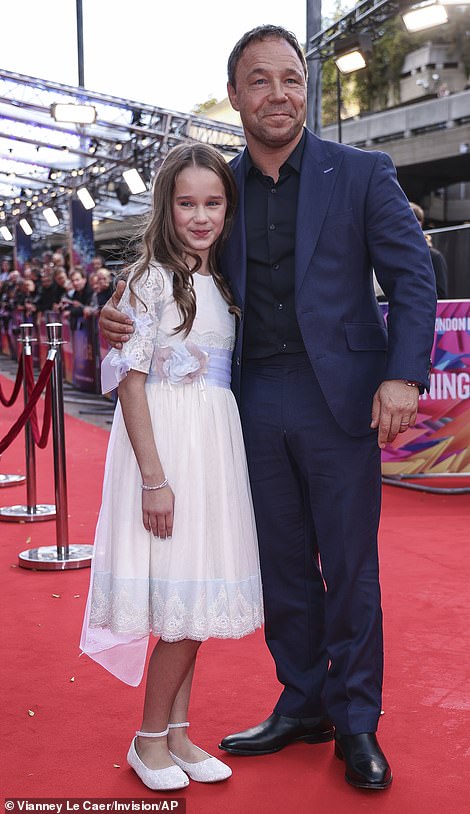 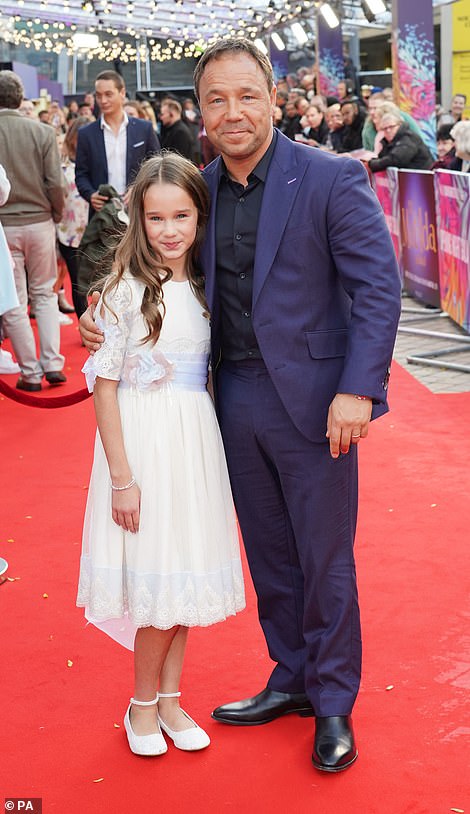 Co-stars: Alisha was joined on the red carpet by Stephen Graham, who plays her father Mr. Wormwood

Career defining role: Born on September 26, 2009 and raised in the Knocklyon area of Dublin, Alisha Weir has been plucked from relative obscurity to play the ‘brilliant’ Matilda Wormwood, a schoolgirl with a vivid imagination who dares to take a stand and turn her wildest dreams into a reality

Stephen, who attended the premiere alongside his wife Hannah Walters, looked smart in a navy blazer and matching trousers which he wore with a black shirt.

Lashana Lynch, who plays Miss Honey, looked sensational for the evening in a multi-coloured sleeveless dress with a sequined embellishment.

The garment featured a diamond print while the No Time To Die star added height to her frame with a pair of black heels.

Sindu Vee, who plays Mrs. Phelps in the musical, cut a glamorous figure in a black strapless gown.

The actress also sported an eye-catching gold necklace and matching arm bands while she added to her look with a burgundy clutch bag.

Born on September 26, 2009 and raised in the Knocklyon area of Dublin, Alisha has been plucked from relative obscurity to play the ‘brilliant’ Matilda Wormwood, a schoolgirl with a vivid imagination who dares to take a stand and turn her wildest dreams into a reality.

Looking good: Emma donned a beige leather jacket for the evening with a tassel detail which she wore with black trousers 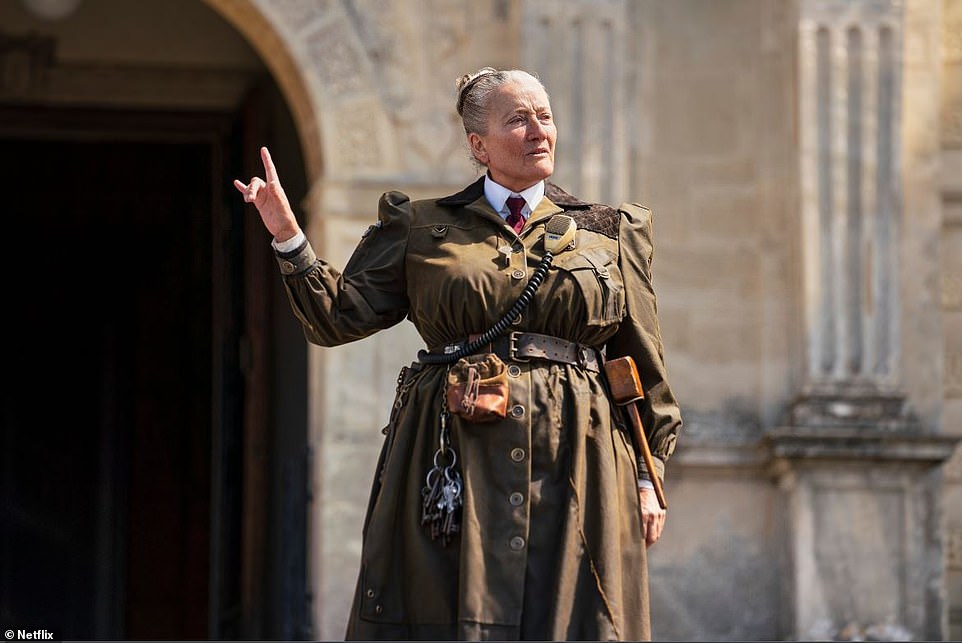 Role: Emma underwent a dramatic transformation for her role as Miss Trunchbull

It could almost be art imitating life for the young Irish actress, who won the coveted role when she was an 11-year old drama student with little professional experience to speak of.

Now aged 13 and on the verge of a major promotional campaign with an A-list group of actors, Weir appears to be completing a remarkable leap from independent features to international stardom.

Before stepping into Matilda’s tiny shoes, the young actress and singer had previously appeared on Ireland’s The Late Late Toy Show, in which she performed a rendition of Cyndi Lauper’s True Colours, and Once the musical at Dublin’s Olympia Theatre. 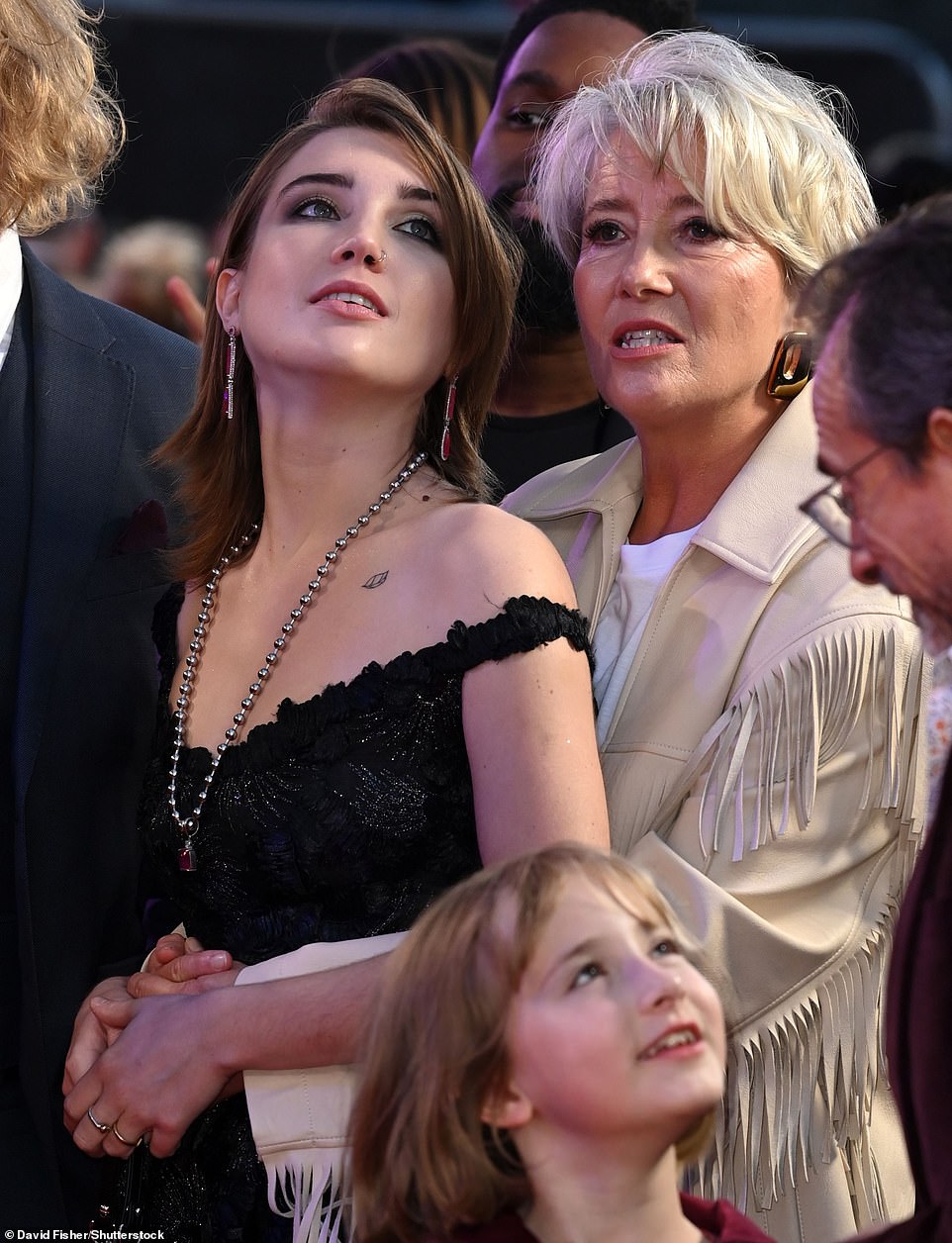 Family: Joining Emma at the premiere was her daughter Gaia, 22, who she shares with husband Greg Wise 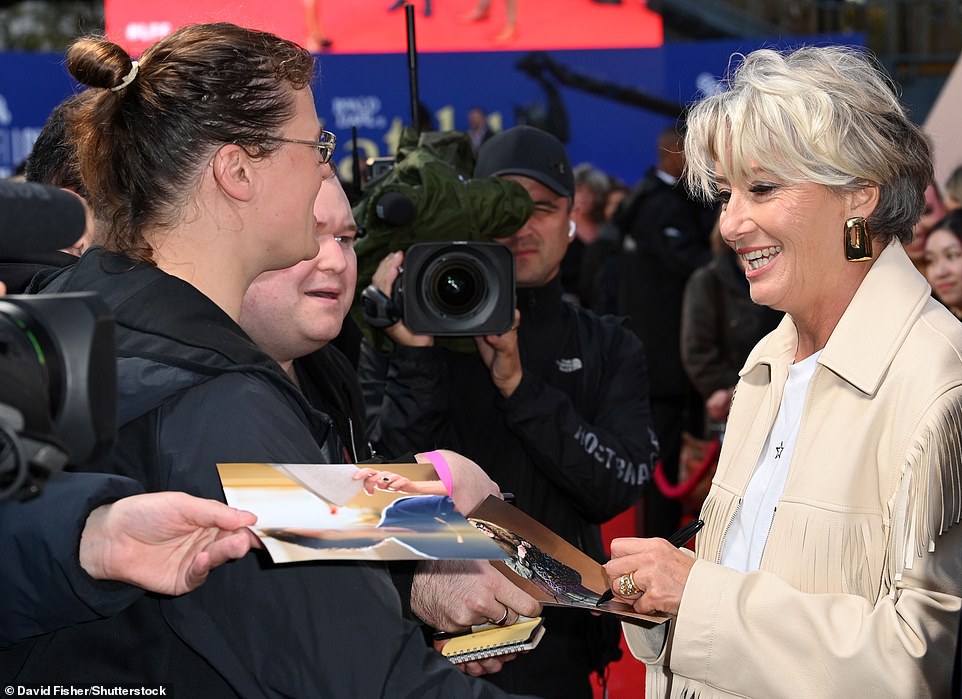 Star-studded: Emma stopped on the red carpet to sign autographs for fans

There has also been a brief appearance on mainstream TV, with the young performer featuring in a rendition of Trip The Light Fantastic on Dancing With The Stars Ireland.

He told followers: ‘MASSIVE NEWS!! Absolutely over the moon to finally announce that my Drama Student Alisha Weir has landed the title role of ‘Matilda’ in the Roald Dahl Netflix production of Matilda!! So so proud!’ 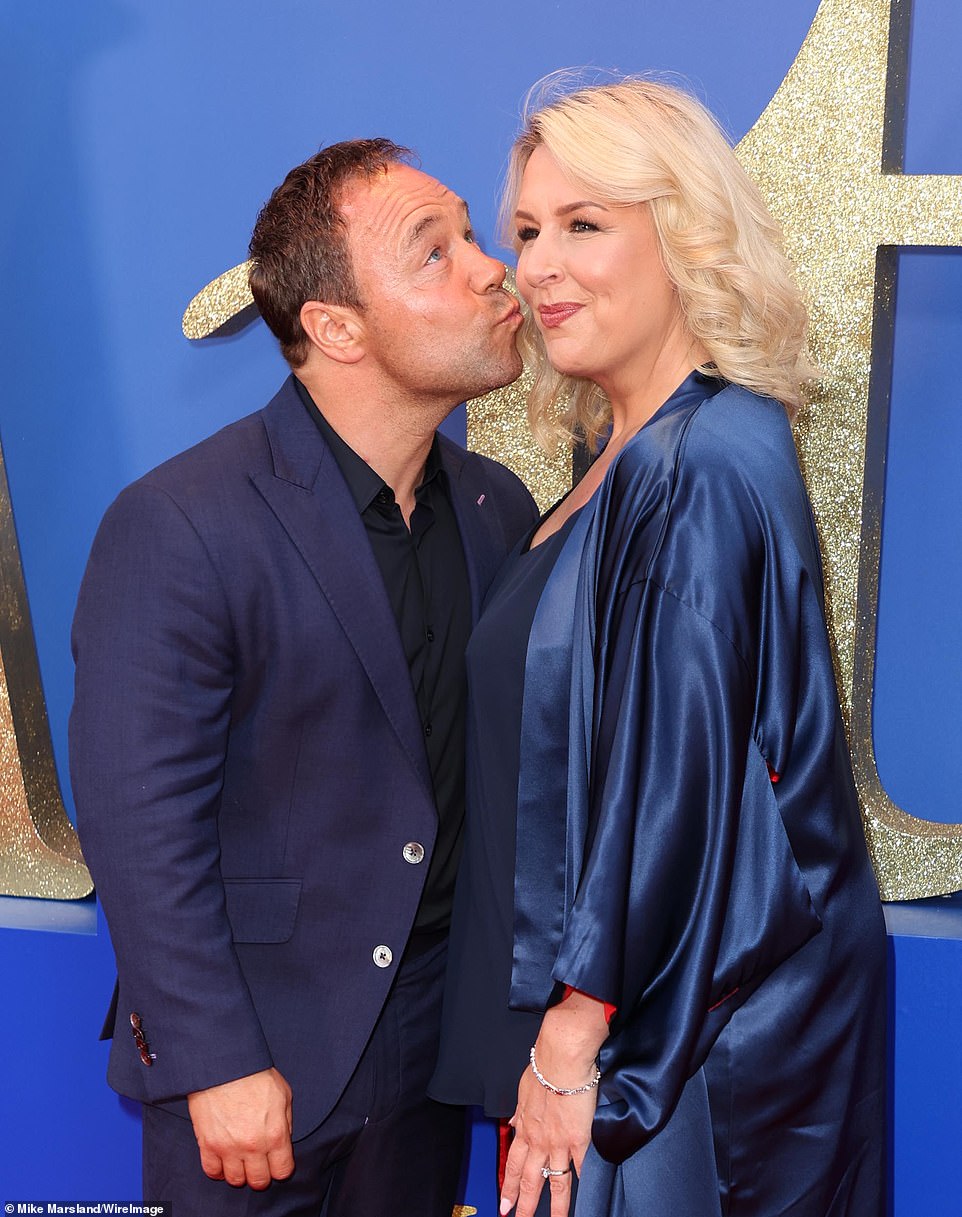 Loved-up: Stephen leaned in for a kiss with his wife Hannah Walters who looked incredible in a navy long-sleeved dress 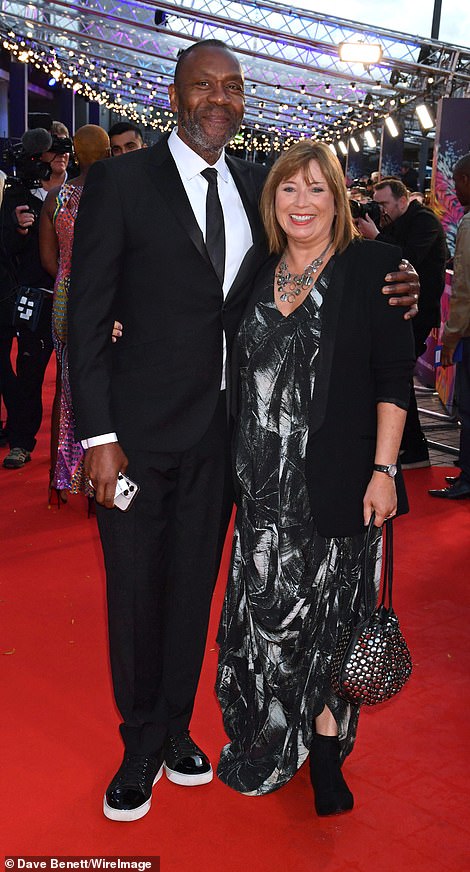 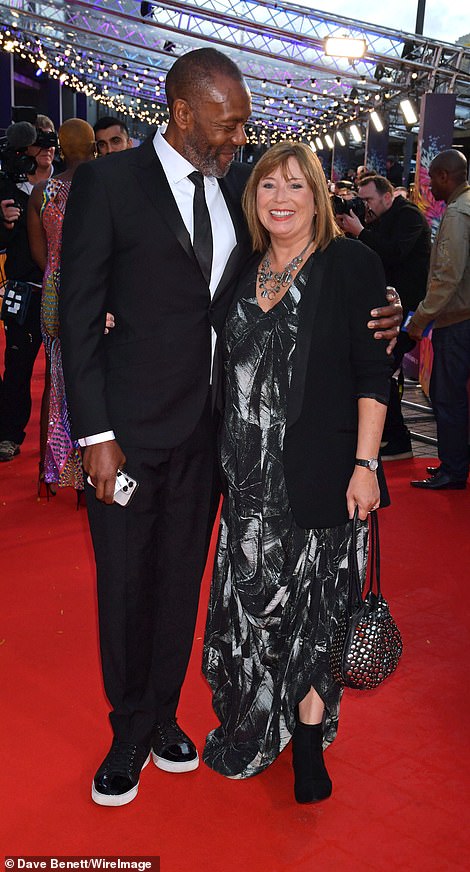 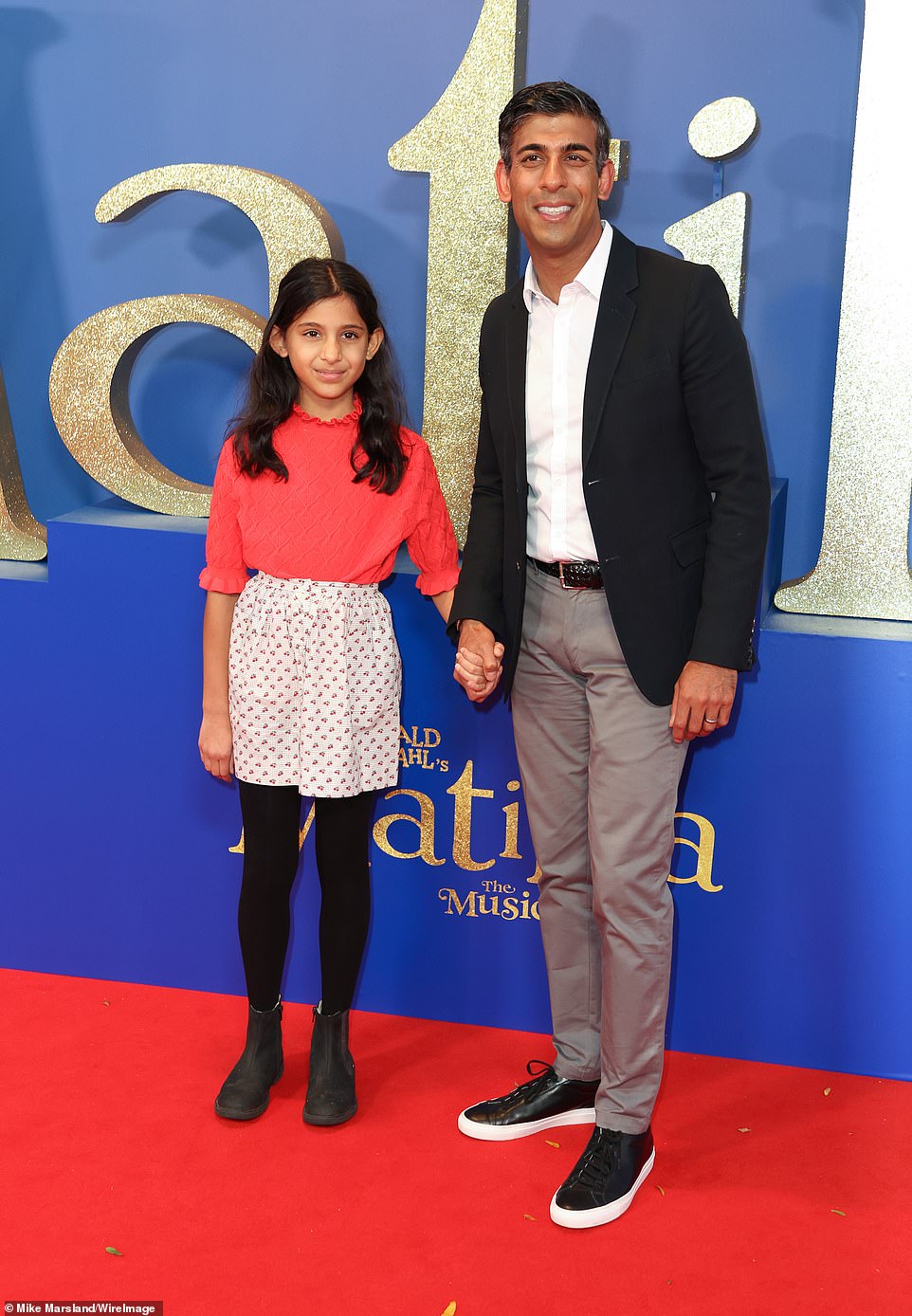 Fmily: Former Chancellor of the Exchequer Rishi Sunak attended the event with his daughter

The agency previously appeared to foreshadow the trajectory her career might take by publishing a glowing report in 2019, in which her vocal performance was described as ‘very clear’ and ‘perfectly in tune.’

Posting on Instagram in January 2021, she wrote: ‘I am delighted to be playing the role of ‘Matilda’ in Matilda the movie musical which will be on Netflix.

‘I am so excited to get started !!! Thank you so much to everyone for all your nice comments. I am so happy.’

Sensational: Sindu Vee, who plays Mrs. Phelps in the musical, cut a glamorous figure in a black strapless gown 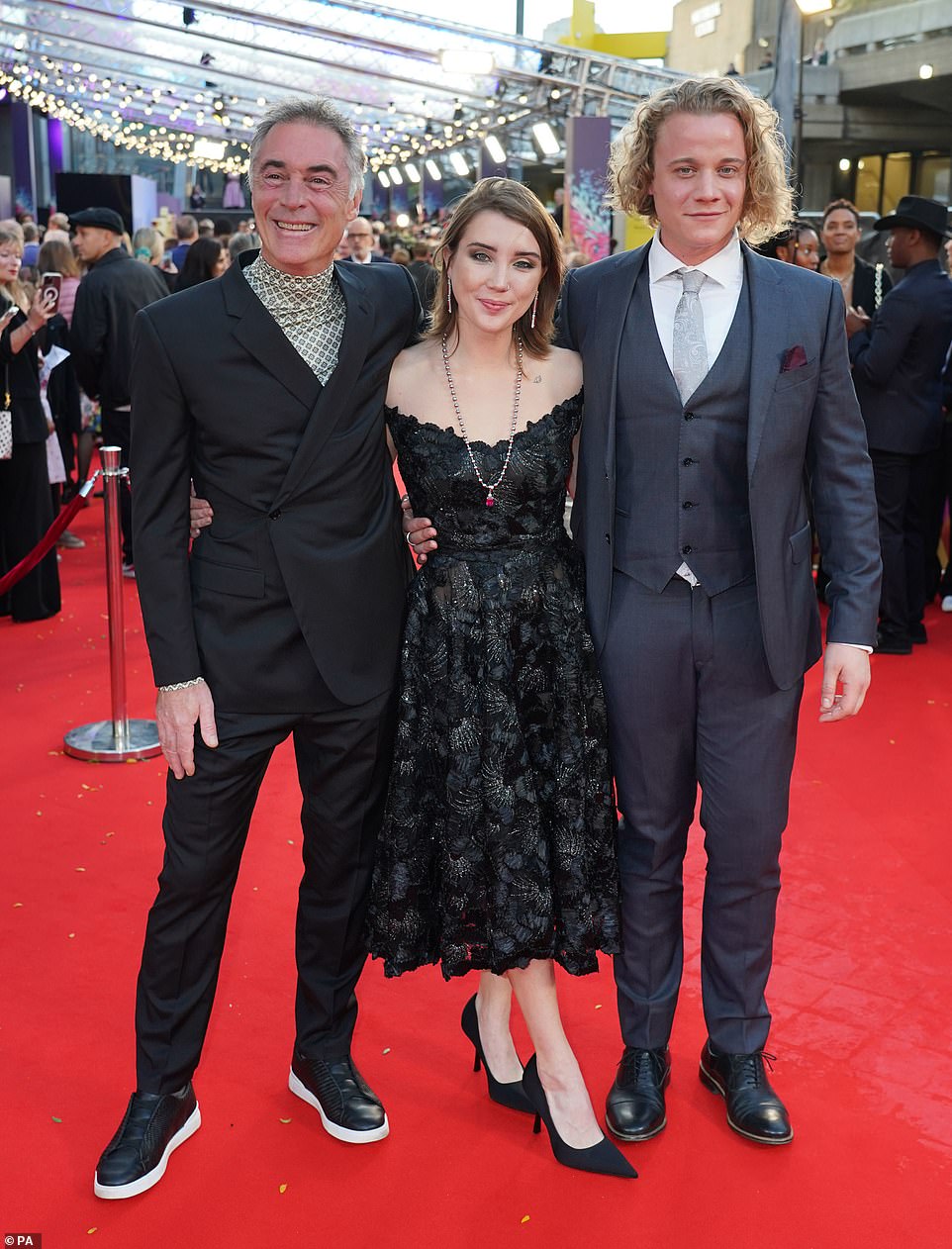 Looking good: Gaia donned a black midi dress with a floral print as she posed alongside her father Greg 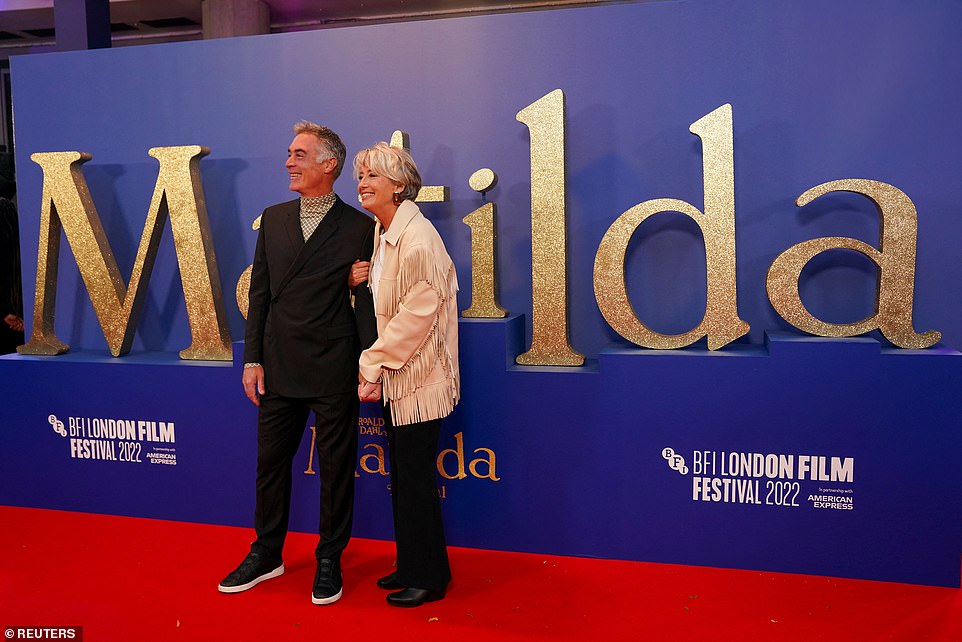 Item: Emma and Greg, who have been married for 19 years, appeared in good spirits as they walked arm-in-arm down the red carpet

However she would be forced to wait before work commenced on the production, with principal photography at Shepperton Studios initially postponed as a result of the coronavirus pandemic.

Matilda director Matthew Warchus recently admitted the part as a ‘huge role’ for Weir, but she earned it on merit following ‘an unforgettable audition.’

Of the new production, he added: ‘Matilda will be an imaginative and fresh retelling of the award-winning musical, Matilda, featuring talented young newcomers, alongside established stars.

‘I look forward to introducing this beloved and powerful story to a new generation of fans around the world.’

Based on Roald Dahl’s 1988 novel, the film is written by Dennis Kelly, with music and lyrics by Tim Minchin from his stage musical adaptation of the book.

The musical became an instant hit when it opened at the RSC’s Courtyard Theatre in Stratford in November 2010; after which it transferred to the Cambridge Theatre, where it is set to reopen once that’s allowed. It also enjoyed a good run on Broadway.

Roald Dahl’s Matilda The Musical is released by Sony Pictures on 25th November.