But before that, a sneak peek of the TV soap saw Charity Dingle (played Emma Atkins) and Ryan Stocks (James Moore) gush over the re-decorated pub.

Whilst seated inside the cosy community establishment, they began: ‘Welcome to the brand new Woolpack. What can we get you? 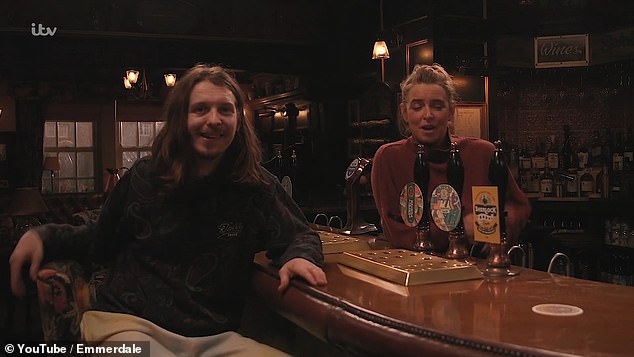 ‘Before that, why don’t you go and warm your cockles over there by our new fireplace.

‘Or if you fancy somewhere a bit more quiet, maybe you’d like to pop into of our cosy booths over there

‘Or if you just wanna grab a drink and chill out a bit, we’ve got our cosy little book corner right over there.

‘And you’ll see that right next to our brand new accessible lowered bar. We have some new accessibility features, I think you may have noticed them on the way in. 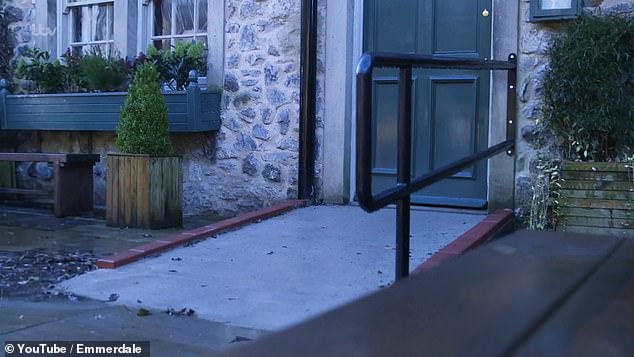 ‘We’ve got a wheelchair ramp now which is amazing and if none if those seats take your fancy, you can even go and sit by our local legends.

‘We’d never leave them out. Come and join us tonight for the grand reopening of The Woolpack.

Currently on the ITV programme, notorious serial killer Meena Jutla has been trying to take her sister Manpreet Sharma down with her after she was arrested.

Meena, played by Paige Sandhu, 25, was finally arrested and charged with the murders of Ben Tucker, Leanna Cavanagh, Andrea Tate and her friend Nadine. 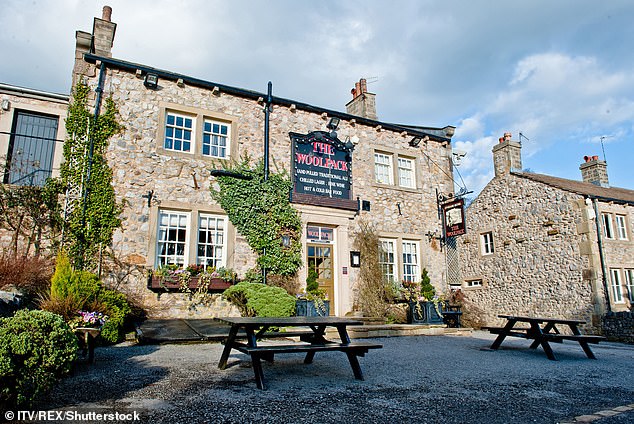 Iconic: Whilst seated inside the cosy community establishment, they began: ‘Welcome to the brand new Woolpack. What can we get you?’ (pictured in 2018)

The murderous nurse was also charged with kidnap and attempted murder but police are yet to get a confession out of her ahead of her plea hearing.

She is still denying killing Andrea, Nadine and Leanna, but spoilers have revealed she will confess to all of her crimes, apart from Andrea’s murder, next week, The Mirror reported.

Instead, Meena will attempt to set her sister up by claiming that it was Manpreet (Rebecca Sarker) who killed Andrea during a dramatic survival challenge event.

Manpreet kissed her ex Charles, who was dating Andrea at the time, after they nearly died and Meena is expected to use this as Manpreet’s motive.

The tense storyline begins when Manpreet decides to visit her sister in prison in exchange for a confession from Meena. 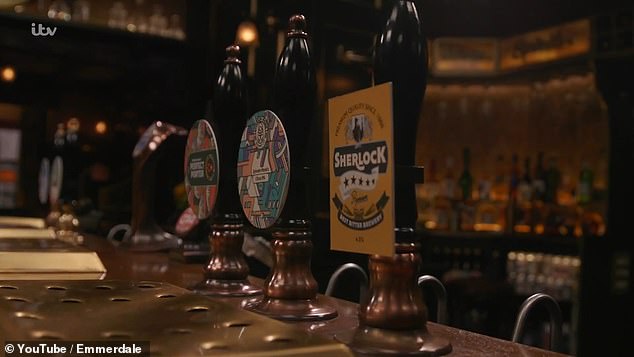 Here it is! A sneak peek of the TV soap saw Charity Dingle (played Emma) and Ryan Stocks (James) gush over the re-decorated pub

A new Emmerdale trailer shows the tense visit, with Meena asking her sister: ‘I’ve missed you so much, have you missed me?’

Manpreet wants nothing to do with Meena after she kidnapped her from hospital and tortured her after she had confessed her string of crimes to her sister.

Growing desperate to see her confess to police, Manpreet decides to go and visit her in prison, only to be told by Meena that they both have to take responsibility for their actions.

She is referring to Manpreet lying to the police by saying Liam Cavanagh had acted in self-defence after he tried to push Meena off a bridge to avenge his daughter Leanna’s death. 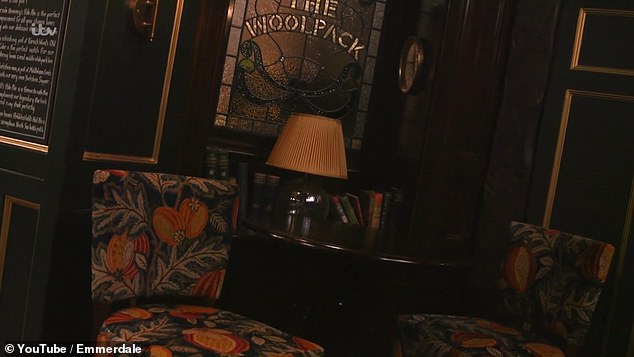 Cosy: Whilst seated inside the cosy community establishment, they began: ‘Welcome to the brand new Woolpack. What can we get you?’

In another twist, Meena uses that against her sister during the prison visit, saying she will only confess if Manpreet admits to the police that she lied.

A furious Manpreet ends up slapping her sister across the face during tense scenes, with Meena then saying she will finally admit to her crimes.

But Meena, still determined to take her sister down with her, makes her confession to the police, but denies killing Andrea, instead claiming it was Manpreet.

Manpreet is set to be questioned by police in upcoming episodes as Meena’s accusations start to get them suspicious.

Emmerdale fans have been calling for soap bosses to kill off serial killer Meena after her horrifying string of crimes and her confession to her sister. 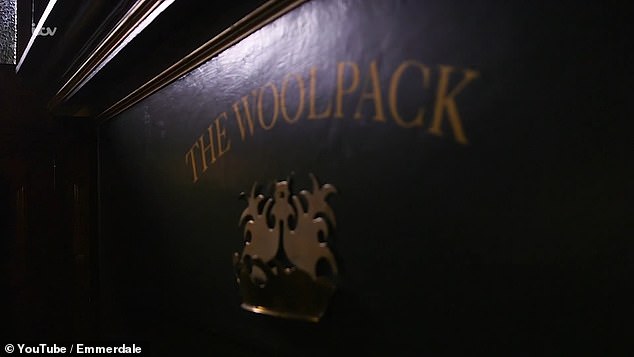 Hilarious: ‘Before that, why don’t you go and warm your cockles over there by our new fireplace’

Ben became Meena’s third victim as she desperately attempted to cover up her crimes, after leaving Andrea to meet her maker in the burning corn maze during the dramatic survival week.

Over the summer she killed teen Leanna Cavanagh after she discovered Meena secretly stole money from the village’s gay pride collection, and had murdered her best friend Nadine before moving to the village.

After Andrea discovered Meena’s role in Leanna’s death, she then met a sticky end, leaving viewers praying for the moment the murderous nurse was finally exposed. 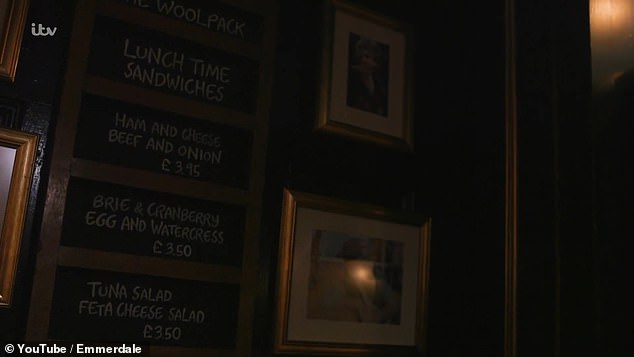 Hooray! ‘And don’t forget its gonna be happy hour from 7:30. We can’t wait to see you there’

But as the plot continues into 2022, exasperated fans have called for an end for the storyline, with many branding it ‘boring’ and complaining it had been ‘dragged out’ for too long.

In other tense storylines, Emmerdale’s most iconic family is set to be thrown into turmoil in the coming weeks, as cousins Charity and Chas Dingle become embroiled in a business war.

In the coming weeks the pair will come face-to-face in a dramatic exchange after events for both The Woolpack and the B&B are scheduled on the same day.

Fans were stunned when it was revealed last month that Charity was the proud new owner of the Woolpack pub, buying the property after Al Chapman attempted to take control for himself.

Chas was furious to learn Charity won the pub at auction, and in scenes set to air this month, the pair plan to host special events on the same day.

The warring landladies take sides and create havoc in a battle of one-upmanship, leading to a tense showdown when they finally come face to face.

Elsewhere in the village, Mandy (Lisa Riley) is traumatised to discover her only son Vinny has married his girlfriend Liv (Isobel Steele) without her knowledge.

Vinny (Bradley Johnson) is guilt-ridden when Mandy explains that she feels betrayed and sees his secret wedding as completely disrespectful, so it remains to be seen whether he can rebuild bridges in the family. 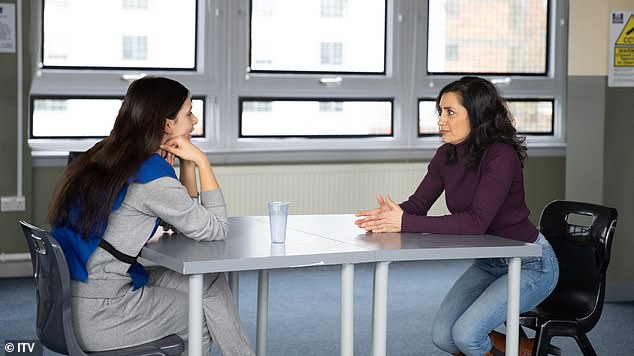 Explosive: Currently on the ITV programme, notorious serial killer Meena Jutla (left) has been trying to take her sister Manpreet Sharma (right) down with her after she was arrested