Martin Lewis fumes at the 77% price cap increase on bills

Shocking forecasts for the October energy price cap (maximum tariff) this week revealed the tariff could hit £3,420 a year for households. Consultant’s BFY warned that by January, this could reach nearly £4,000 as gas prices continue to soar globally. The group said this could mean households have to fork out £500 for January alone.  But the Government is now stepping in by offering millions of households financial support with a non-repayable discount as part of the Energy Bills Support Scheme.

The scheme is part of the Government’s £37million Cost of Living Support package, which is aimed at providing support for the most vulnerable households as prices continue to soar.

The £400 discount will be administered by energy suppliers and will be paid to consumers over six months, with payments starting from October 2022.

For those with a domestic electricity meter point who pay for their energy via standard credit, payment card and direct debit, they will receive an automatic £400 deduction to their bills over the period.

For traditional prepayment meter customers, they will receive Energy Bill discount vouchers for the week of each month via SMS text, email or post, using the customer’s registered contact details. Customers will have to make sure they redeem these at their usual top-up point. 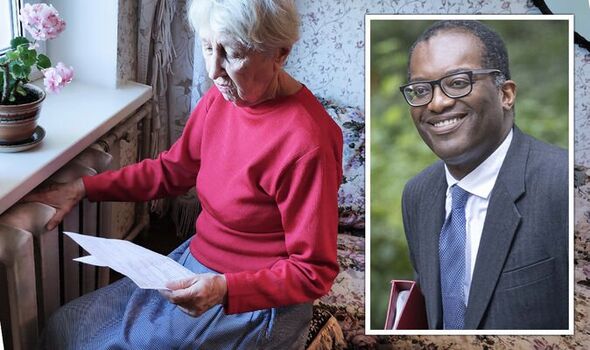 Millions of households will receive a £400 discount on energy bills (Image: Getty )

The energy price cap is expected to reach well over £3,000 (Image: Express)

This could be at their local PayPoint or Post Office branch, for instance.

Energy Minister Greg Hands said: “Today we have set out how the government will deliver discounts to help 29 million households with their energy bills this winter.

“I encourage families across the country to engage with these plans and particularly those customers on traditional prepayment meters who need to take action.cCoupled with world-leading action to radically enhance our home-grown energy security, we will continue to be on the side of British consumers now and into the future.”

Monthly discounts will start from £66, which will be deducted from energy bills in October and November.

This will then rise to £67 each month from December until March 2023.

The non-repayable discount is part of the Energy Bills Support Scheme. (Image: Express)

No matter how frequently a customer normally pays off their bills (monthly, annually or quarterly), the non-repayable discount will always be provided on a monthly basis.

As a result, even customers whose housing circumstances change during the six-month period still benefit from the discount.

The same goes for students and other tenants renting properties with domestic electricity contracts from landlords.

And landlords who resell energy to their tenants are required to pass on the discounted payments in line with Ofgem rules to uphold the rights of tenants.

Business and Energy Secretary Kwasi Kwarteng said: “People across the country are understandably worried about the global rise in energy costs, and the pressure this is placing on everyday bills.

Mr Kwarteng the help will will “go some way to help millions of families” (Image: Getty )

“While no Government can control global gas prices, we have a responsibility to step in where we can and this significant £400 discount on energy bills we’re providing will go some way to help millions of families over the colder months.”

Chancellor Nadhim Zahawi, who recently replaced Rishi Sunak after his resignation, said: “We know that people are struggling with rising energy prices which is why we have taken action with support over the winter months to help ease the pressure on household budgets.

“This £400 off energy bills is part of our £37billion of help for households, including eight million of the most vulnerable households receiving £1,200 of direct support to help with the cost of living.

“We know there are tough times ahead and we will continue to do everything in our power to help people.”

Greg Hands encouraged “families across the country to engage with these plans” (Image: Getty )

While the Government is offering other measures to help with the cost-of-living crisis, critics have hit out at Westminster’s “slowness” to intervene.

Mike Foster, head of the Energy and Utilities Alliance, told Express.co.uk: “Government intervention in dealing with the price cap was too slow, because once the price cap has been announced by Ofgem, suppliers immediately ramp up their direct debits.

“The majority of billpayers pay by direct debit, so we were paying the increased cost before the price cap even came in because annual adjustments get made by the direct debit.

“We were warned that this was going to happen before any revenue was there for us as consumers.

“The Government need to think a bit more sharply about putting things in place at the time when Ofgem announce their latest price cap change, which is in a couple of weeks time.”