Just 9,700 positive Covid tests were logged in England in the past 24 hours, as the Government dashboard stops reporting the UK-wide figure for the first time since early in the pandemic.

After weeks of experts calling for the daily statistics to be scrapped, infections, hospital admissions and deaths are now being updated only on a country-by-country basis.

While ministers have stopped short of ditching the daily stats completely, today marks another small step towards learning to live with Covid. The Government stopped publishing them at weekends in February.

Scientists welcomed the move today, telling MailOnline the daily infection numbers had become ‘redundant’ now that free testing has been stopped for the vast majority of people.

Health officials are now relying on the Office for National Statistics’ weekly infection survey, which uses random sampling to get a more accurate picture of the virus’ trajectory.

In total, there were 9,751 new infections in England today, which is technically a 66 per cent fall compared to last Tuesday. There were also 272 deaths today, down a quarter on last week. And there was just 669 hospitalisations on Sunday — the most recent day figures are available for, down by 17 per cent on the week before.

Dr Simon Clarke, a microbiologist at the University of Reading, called for the daily stats to be ditched altogether.

‘Those daily case numbers do not have any relationship to the actual number of infections in society, they don’t tell us anything,’ he said.

‘Before they were an indication of how much Covid was in society but now they are redundant [because of mass testing being stopped]. From a medical point of view I suppose it is important to keep a record of Covid hospital admissions and deaths but we only need to focus on them if we see trends going up in the ONS.’ 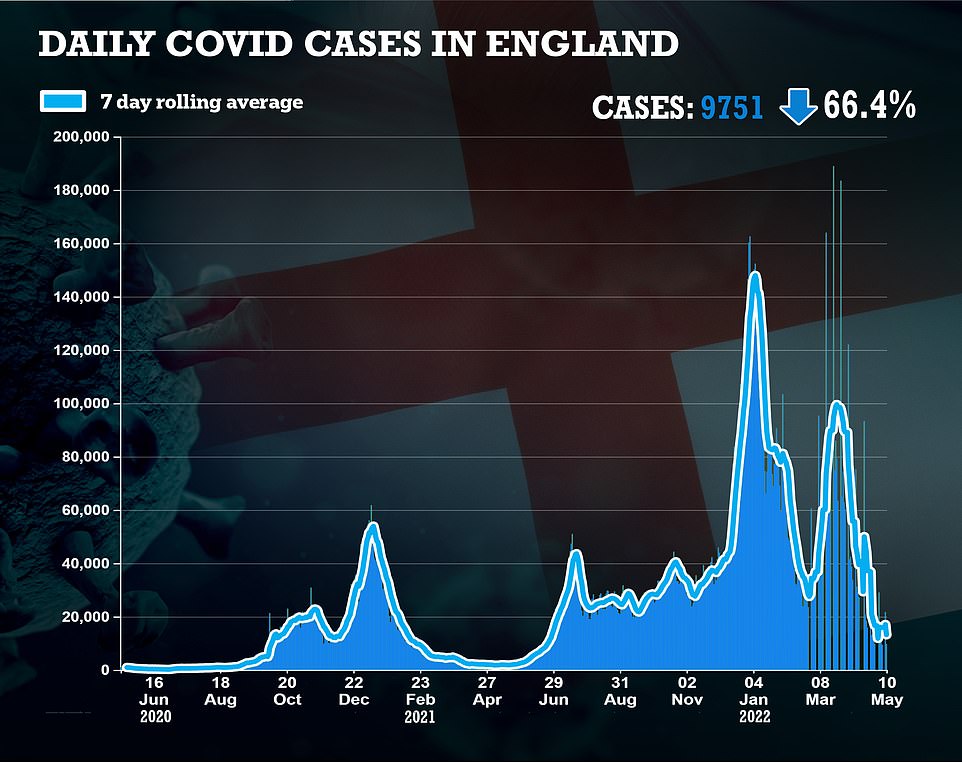 ENGLAND In total, there were 9,751 new infections in England today, which is technically a 66 per cent fall compared to last Tuesday. There were also 272 deaths today, down a quarter on last week. And there was just 669 hospitalisations on Sunday — the most recent day figures are available for, down by 17 per cent on the week before.

A fourth dose of Pfizer or Moderna’s Covid jabs provide an ‘substantial’ boost to immunity against the virus, UK Government-funded research shows.

The study of around 160 Britons aged 50-80 found the quadruple-vaxxed had up to seven times more T cells and two times more antibodies ‘over and above’ triple-jabbed people.

There were also no clear signs vaccines are getting weaker with each dose, allaying fears that ‘over-vaccinating’ could cause the jabs to lose their potency.

The finding paves the way for millions more Britons to get a fourth dose later this year.

While countries like Israel and Germany have been rolling out fourth doses to their entire population since March, currently only over-75s, care home residents and severely ill patients are being invited in the UK.

British health chiefs have confirmed an autumn Covid vaccine scheme will go ahead, although they have not decided which groups will be eligible.

The study did, however, reveal people who had high levels of antibodies and T cells before they were given a fourth dose only got a small boost to immunity.

These people may have recently been infected recently or have had their third dose more recently, meaning their immunity had not had as long to wane.

Professor Saul Faust, chief investigator of the Cov-Boost study, said this suggests there is a ‘ceiling effect’ on ‘how high you can go’ with immunity which needs to be further studied.

The researchers said still have doubts about whether a fourth dose should be rolled out to younger groups, as they are at lower risk from the virus.

Another 268 positive tests were logged in Wales, up 133 per cent compared to last Tuesday. Hospital data shows eight infected patients were admitted, while nine deaths within a month of testing positive were recorded.

The nation-level data is all that can be reported after Scotland yesterday announced it was moving to twice-a-week data releases for the rest of this month, before moving to weekly statistics in June.

In response, the UKHSA confirmed Covid statistics are changing, with the UK figures only available on Monday and Thursday.

Clare Griffiths, head of the UK Covid dashboard, said: ‘As we move forward in the pandemic, changes to reporting across the four nations means Covid metrics will be updated on different dates and schedules.

‘Variations in reporting schedules should be considered when looking at reported Covid figures and day-to-day comparisons may therefore be misleading.’

It adds to the fragmentation of the daily numbers, as Wales now only publishes its vaccine data on Monday, meaning UK-wide updated immunisation data is only available once a week.

It comes after Ireland’s Department of Health last month confirmed it will ‘no longer’ publish daily Covid figures. Instead, outbreak figures will be ‘updated regularly’ on the country’s Covid dashboard.

The country’s health chiefs said they will continue to monitor all information relating to the epidemiology of the virus, including case numbers, local outbreaks and trends, as well as the emergence and detection of new variants in Ireland and abroad.

But UK health bosses have insisted that there are ‘currently no plans’ to scrap the daily numbers. Data for England continues to be published daily under each topic area — testing, cases, healthcare, vaccinations and deaths.

It follows pressure from both Tory MPs and top experts, who warned the infection numbers have become hugely unreliable now free Covid tests have been stopped for the majority of Britons.

Both hospitalisation and death numbers have been skewed for several months because they do not necessarily reflect people who are ill, only ones who have tested positive.

The UKHSA will still publish daily England figures but headline UK numbers — used throughout the pandemic to justify implementing restrictions — will be affected.

It comes after a study found pregnant women who were vaccinated against Covid were at a ‘significantly’ lower risk of a stillbirth compared to the unvaccinated.

There had been widespread safety concerns about the jabs among expectant mothers, which saw them become one of the least vaccinated groups in the country.

WALES logged another 268 positive tests, up 133 per cent compared to last Tuesday. Hospital data shows eight infected patients were admitted, while nine deaths within a month of testing positive were recorded

Their fears were seized upon by anti-vaxx conspiracy theorists, who claimed the jabs were linked to stillbirths and other problems during pregnancy.

But British researchers who reviewed the findings of more than 20 studies involving 120,000 pregnant women found those who had the Pfizer or Moderna vaccine had a 15 per cent decreased risk compared to un-jabbed women.

The researchers say this may be down to unvaccinated pregnant women becoming more severely unwell with the virus, which then raises the risk of harming their baby.

And there was no difference in the rate of miscarriages, premature births or heavy bleeding during pregnancy between the vaccinated and unvaccinated.

The findings provide ‘much-needed assurance’ to women on the safety and benefits of getting jabbed when pregnant, the experts said.

The meta-analysis looked at stillbirths when Delta was world-dominant, so it’s not clear if the findings still apply to the milder Omicron variant.

In early 2021 pregnant women were not offered the jab in the UK out of caution because the original trials did not include them due to ethical reasons.

But by April last year the Joint Committee on Vaccination and Immunisation (JCVI) invited pregnant women to come forward after real world data from the US and Israel threw up no causes for concern.

But uptake has remained sluggish among expectant mothers, with only half of pregnant women in England being vaccinated, citing unfounded concerns about the effect of the jab on their baby.

5,000 cancer cases a year 'could be missed' under Labour's self-referral plans for NHS